As a result of the deal, which is in collaboration with VISA, the organisation has launched a limited-edition EVOS debit card. 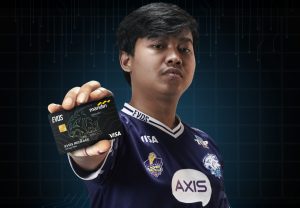 Holders of the EVOS debit card will be able to purchase in-game currency and access all payment features that are supported by Mandiri Gold Debit.

Moreover, after completing the registration EVOS holders will receive EMP (EVOS Membership Points) worth IDR 100,000 (~£4,96), as a reward.

Michael Wijaya, Chief Marketing Officer of EVOS Esports, commented: “EVOS Esports launched the EVOS Card as a mark forward for our industry, especially by collaborating with Bank Mandiri. Through this collaboration, EVOS Esports is also a pioneer for an esports team to work with a state-owned bank, and provides a positive implication that we have been recognised on the national scale as a trustable organization in Indonesia at this moment.”

EVOS Esports previously collaborated with VISA as part of the organisation’s ‘Unlock Your Dreams’ campaign.

In 2021, the esports organisation has announced partnerships with Nexplay, PUMA and Hepmil Creators’ Network (HCN).

Evi Dempowati, Senior Vice President of Bank Mandiri added: “The gaming landscape is growing rapidly, so Bank Mandiri needs to open more access for the gaming community in Indonesia, to provide the needs of gaming payment. Working with EVOS Esports for the membership card launching, as the strategic actions for us to develop the esports ecosystem in Indonesia.”

The EVOS debit card, which officially launched on June 14th, is now available in all Bank Mandiri branches across Indonesia.

Esports Insider says: The collaboration between EVOS Esports and Bank Mandiri consolidates that the former is a reputable and trusted organisation within Indonesia. The deal also highlights the rapid growth of esports in Indonesia, when companies such as VISA and Bank Mandiri are trying to take advantage of possible investment opportunities.