As a result of the partnership, Rivalry’s logo will appear on the centre of the organisation’s Dota 2 player jerseys. 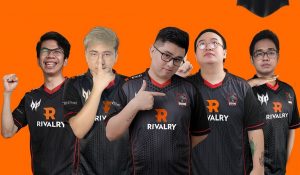 The company becomes the eighth partner of BOOM Esports, joining the likes of internet service provider CBN and fan-engagement platform Espo. The organisation currently fields rosters in six titles, including Dota 2 and VALORANT.

Devesh Kabdwal, Chief Revenue Officer at BOOM Esports, spoke on the deal in a release: “I believe the two brands brought together Boom and Rivalry, have great potential to generate high-quality, entertaining content and overall add great value to the ecosystem.

“A platform like Rivalry is instrumental in rewarding our hardcore fans who understand our team as well as we do. It also gives our fans another reason to follow our team very closely and benefit directly from the knowledge while enabling them in celebrating our victories with us.”

The sponsorship deal is the first to be secured since Rivalry became publicly listed on the TSX Venture Exchange in October. Since its listing, former World Economic Forum executive Kirstine Stewart has joined the company on its Board of Directors.

Althea Cunanan, Country Lead for Rivalry, added: “At the core of Rivalry’s business is the esports ecosystem it sustains, which it heavily engages through media and entertainment, as well as by supporting smaller creators and grassroots communities.

“Rivalry’s support extends to the pro gaming scene as well. We are very excited at the exemplary performance BOOM Esports has demonstrated so far, confident that they can well represent SEA at The International. We are thrilled to look forward to a strong 2022.”

Esports Insider says: Deals of this nature aren’t unfamiliar within the industry. However, for BOOM Esports, acquiring Rivalry as its lead sponsor is a sign that the organisation is growing in what’s becoming a highly competitive market.