According to the release, the partnerships looks to bring ‘the benefits of esports’ to Durham students as well as the city’s wider community. 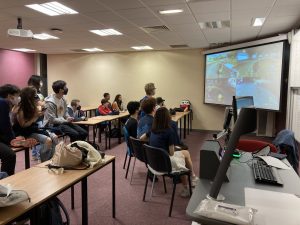 As a result, both entities will work together on a range of initiatives. This includes esports scholarships, online tournaments, offline events, and digital skills workshops. In addition, the university will host seminars and talks featuring LDN UTD’s roster relating to mental health, career development and esports content creation.

Quentin Sloper, Durham University Director of Experience, commented: “This partnership opens up some outstanding opportunities for our students and the wider County Durham community.

“Working with the team from LDN UTD and going head to head in competition with some of their professional gamers will provide a platform for our students to test their skills at the highest of levels whilst giving them exposure to the range of career opportunities, beyond competing, that are now rapidly opening up within the industry.”

The collaboration is also expected to provide a range of benefits to LDN UTD as well. As such, the organisation’s professional players will be able to utilise Durham University’s expertise in enhancing an athletes’ ‘personal support matrix’. In particular, the matrix relates to nutrition, mental health, and physical fitness.

Despite initial activations focusing on Durham University students, the entities have confirmed that plans are in place to extend its support to competitors and gamers in the County Durham area. One of the plans detailed includes collaborating with schools and colleges in the local area to teach basic coding skills.

Oliver Weingarten, LDN UTD Founder and CEO, commented: “The reputation of Durham University speaks for itself, and as we look to broaden the mission of LDN UTD, we look forward to partnering to support the students and engage a wider community.

“Education is a key tenet of the LDN UTD values, alongside wellbeing, diversity and inclusivity in the esports space. We believe the industry-specific support and guidance we can provide will ensure the success of Durham’s esports projects going forward.”

Esports Insider: Providing greater esports-specific educational opportunities to students is a great way of developing the esports sector. Durham University will be able to utilise LDN UTD to teach its students about the esports industry, meanwhile, the organisation will also benefit from the university’s expertise in other areas.