Capcom has banned Ryan “FChamp” Ramirez, also known as Filipino Champ, from all of its fighting game tournaments because of a racially insensitive tweet. Notably, this includes events that are part of the Capcom Pro Tour and the Street Fighter League. Capcom announced the ban in a statement from the Capcom Fighters Twitter account on June 16.

FChamp was punished because of a since-deleted tweet from June 13 that depicted a watermelon with the caption #WatermelonLivesMatter. He received criticism for co-opting the language of the Black Lives Matter movement. In addition, he did so while using a watermelon, an image historically used in racist stereotypes against black people. FChamp apologized for his insensitive tweet shortly after posting it.

The ban issued by Capcom is indefinite, due to FChamp’s violation of the player code of conduct. It applies to American and international events alike. Currently, it is unclear at what point Capcom will consider rescinding the ban, if at all.

In response to FChamp’s ban, many have pushed for Capcom to also ban Seon-woo “Infiltration” Lee. Infiltration was charged with domestic abuse in 2017 and dropped by Panda Global as a result in 2018. He voluntarily withdrew from the Capcom Pro Tour throughout late 2018 and all of 2019. However, Capcom never issued a lifetime ban, and Infiltration made plans to return to competition in 2020. 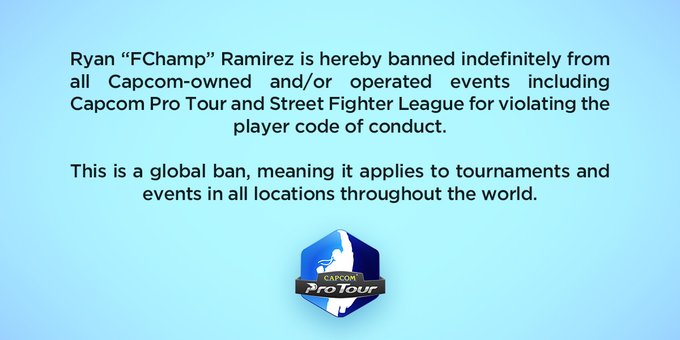 Other fans viewed FChamp’s ban as excessive given the nature of his offense. Many noted that Skullgirls developer Mike “MikeZ” Zaimont received comparatively little backlash despite making a similarly insensitive comment. While commentating a tournament on June 4, MikeZ said that a character “can’t breathe,” jokingly referencing George Floyd’s last words.

FChamp is not the first player to receive an indefinite ban from Capcom this year. Back in April, Capcom banned Dalauan “LowTierGod” Sparrow and Christina “Ceroblast” Tran due to offensive comments they made online.