The Florida Mutineers have become the first team to win three tournaments and go back to back in the Call of Duty League. After a dominant performance against the top teams at the Minnesota Rokkr home series, the Florida Mutineers have looked unstoppable. Florida was able to take down the Chicago Huntsmen, Dallas Empire, and the first-place team, Atlanta FaZe. They were able to cement themselves as a top-tier team by tying the top teams with two tournament wins. 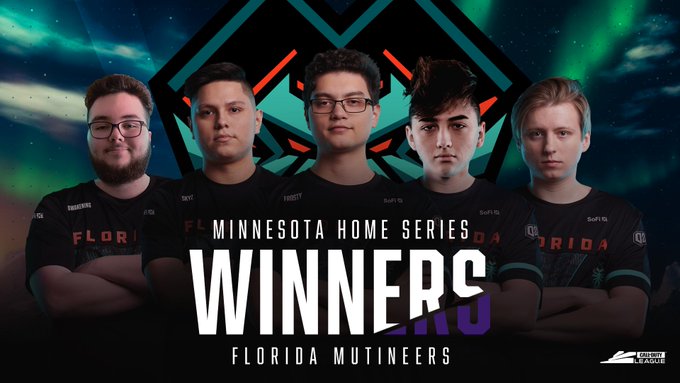 Florida recently replaced Chance “Maux” Moncivaez who had been underperforming in the main assault rifle role. Joseph “Owakening” Conley became his replacement from his prior role as a substitute. Since the roster swap, the Mutineers have been a top contender among the other CDL teams. Owakening has improved the team greatly and was one of the biggest contributors to their second tournament win of the season.

Overall, the Mutineers lost only three maps during the Paris Legion’s home series. The New York Subliners were the only team to take Florida the distance, beating them in the first Hardpoint and Search and Destroy. However, the Mutineers quickly recovered and managed to pull off the reverse-sweep to secure their place in the finals.

On the other side of the bracket, the Atlanta FaZe battled their way into another finals appearance against Florida. FaZe last met the Mutineers during the Minnesota Rokkr home series final the weekend before. Florida started off the series against FaZe with a 60-point win on Gun Runner Hardpoint. They took their momentum into the Piccadilly Search and Destroy where they won 6-5. While Florida was 2-0 up in the series, that didn’t mean their victory was secured. The Atlanta FaZe had become known for their game-five victories and reverse sweeps.

The Mutineers made their way into the Hackney Yard Domination with the determination to win. However, the Florida Mutineers obliterated FaZe, winning the Domination 235-70. This performance broke the previous Domination win record by 60 points. The Chicago Huntsmen had set the record against the Paris Legion by beating them by 105 points in Domination. With the win against the Atlanta FaZe, the Florida Mutineers become the first CDL team to win three tournaments and the first team to win back to back.