European esports organisation G2 Esports has announced the expansion of its sales territory for consumer products to now include China.

According to the release, G2 Esports’ ecommerce products will be available to purchase through internet retailers T-Mall and Taobao. This includes the G2 2021 Pro Kit, the G2 Essentials range and G2 x Adidas lifestyle products. 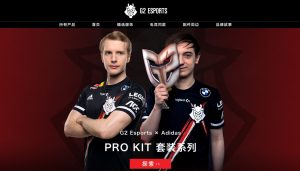 G2 Esports products for the Chinese market are set to be released in the coming months, with an official G2 China Jersey in the pipeline.

This year has been a productive time for G2 Esports. Alongside securing partnerships with Bondly and Betway, the organisation has revealed several fashion collaborations alongside New Era, Ralph Lauren and Adidas.

Despite being heavily regarded as a major esports region, China’s ecosystem continues to develop. This year alone, entities such as the ePremier League and BLAST have made efforts to expand into the region. Moreover, prominent brands such as Ninjas in Pyjamas and Weibo have entered into the LPL, China’s franchised League of Legends competition.

Esports Insider says: By creating greater opportunities for its community all around the world, G2 Esports is slowly becoming a global esports organisation. With a growing fanbase in China, it only makes sense for the org to also expand its sales, which will expectedly boost its revenues.