The League of Legends European Championship (LEC), has finally started this weekend, and with it, we already have all the major regions running through the 2021 Spring Split.

All ten participating teams have already faced two different opponents in this first week of the tournament, and today they will have a new match as the first LEC week is meant to be a “Superweek”.

The current LEC Champion, G2 Esports, has had a very sweet beginning, defeating their two opponents, MAD Lions on Friday and SK Gaming on Saturday, showing a very consistent performance, especially from their new ADC, Martin ‘Rekkles‘ Larsson, who has delighted the fans by playing Sivir and Jhin with, not only a 100% of win rate, but also an insane KDA: 9/0/9 and 3/0/6 respectively. 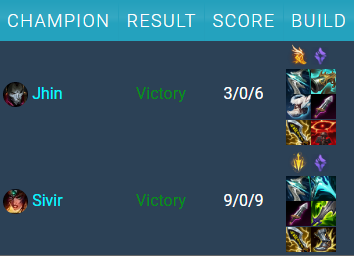 But Rekkles is not the only G2 player that has amazed the fans. The top laner, Martin ‘Wunder‘ Hansen, has also shown a very good performance, but what surprised everyone was the Champions he picked for both games: Gragas against MAD Lions, and Ivern against SK Gaming!

While Gragas is now pretty strong for the top lane in the meta, and we have seen him on several regions, the Ivern pick was not as much expected.

It is true that, on the previous day, Excel Esports brought the living tree to the top lane, but the results they had made everyone clear about how risky this pick is. Nevertheless, Wunder did not hesitate and chose it yesterday… and won!

After that game, the Danish player had an interview with Laure Valée in the official broadcast where he explained how does Ivern top work, talking about its build too. Here it goes:

Wunder, I have a question for you: Ivern top, why is it a good pick, when does it fit well? And congratulations on winning with the champ.

First of all, thank you. Answering your question, I must admit I have no idea. We saw that Excel was playing these mages on the top lane and, as we play them tomorrow, I wanted to try them out. And I thought, what better time to test it than on stage?

I’ve been experimenting and have screwed up a couple of times. Even though I’m a Starcraft veteran, my micromanagement hasn’t been optimal, but I’ve been learning how to use it as the game has progressed.

If Excel plays it tomorrow, we’ll beat them anyway because my teammates are so good.

We have to talk about the itemization here. I know LS is watching, so be careful, tell me about the items you bought. You went for Moonstone first, which I guess you have to buy with Ivern. But what do you buy next? You bought the Staff of Flowing Water, but why the Censer as the third item?

I realized that the interaction with the Moonstone, the healing everyone when you’re in combat… it was nice to get items that gave bonuses to both the team and to me when I healed someone. Obviously, it’s a pretty powerful combination. The important thing is to get to that point without falling too far behind.

This champion is not like Soraka in the sense of saving someone, because Ivern heals and buffs all the champions on your team. Soraka heals you 1000 health and makes it hard to kill you. With this build, you don’t have to focus on keeping just one person alive, you can buff the whole team. That’s when these items shine.

No idea about the rest of the regions. Excel played it, but they weren’t very successful either. I don’t know if it’s because they are worse or because they relied too much on the top laner. Maybe they did well with the champ in scrims, but competitive is another matter.

Today I’m sure it would have been easier to win if I had played a standard top lane champion. But it’s also good to be testing and experimenting with things because you might run into something that is broken in a matchup or broken in general. And that’s why I wanted to try it.