Infinity Ward has announced some upcoming changes for Modern Warfare and Warzone regarding cheaters. Since the games’ release, players have dreaded running into cheaters in their lobbies. However, while it is an issue in Modern Warfare, Warzone is where players have felt the cheating is spiraling out of control.

Now, Infinity Ward is taking steps to stem the tide – or at least give cheaters their due punishment. Going forward, suspected cheaters will now be matched against one another in Warzone and Modern Warfare matches. This should allow the devs to monitor such players much more closely and confirm when an account actually is cheating. They can then take the appropriate measures against the offending parties.

Additionally, when such cheaters do receive bans, Infinity Ward will notify players who reported them. It should prove quite cathartic to get that little message informing you that justice has been served. 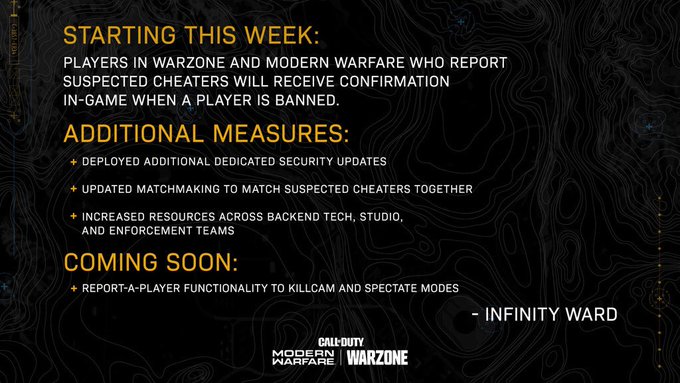 
Anti-cheating efforts like these have been requested for quite some time. While Activision reported that they had banned 50,000 cheaters as of this past March, it was only days later that the new Warzone Wednesday event was ruined by players abusing bots.

Fortunately, this update won’t be the end of Infinity Ward’s efforts to punish cheaters. The developer has added more security and given more resources to its security-focused teams. More importantly, it is working on allowing players to report cheating via the Killcam and Spectate modes. This should prove very helpful. Killcam footage often makes it blatantly obvious when you’ve died to a cheater. Spectators of a match might also spot cheating that those playing the game would miss.

All in all, Infinity Ward’s upcoming changes should be a pretty big step towards solving the problem. Despite some players questioning how the functions will work, the majority seems to be pleased about these updates.