Yesterday, Counter-Strike: Global Offensive (CSGO) shipped a new feature called “Text Filtering” in an attempt to counter toxicity and offensive commentary from players. Unfortunately, it has also had the negative effect of causing framerate drops.

It’s no secret that the CSGO community has a history of extremely toxic behavior. It’s sad, but players have grown accustomed to seeing racist/sexist/homophobic commentary from others. While the vast majority oppose this behavior, some users still engage in toxicity to shock or offend others.

Text Filtering is Valve’s attempt at combatting this. The filter removes profane language from the game. It’s no doubt a good step towards building a better community, but it’s also causing some new issues.

Unfortunately, it didn’t take long for CSGO players to realize that something about the update wasn’t right. Text Filtering causes massive frame drops when using weapons that have a name tag. Reddit user sphhax uploaded a video showing notable frame drops when using text filtering with such weapons. He compared his performance before and after disabling this feature. He found a remarkable improvement in framerate (~65 more frames per second) after disabling it. 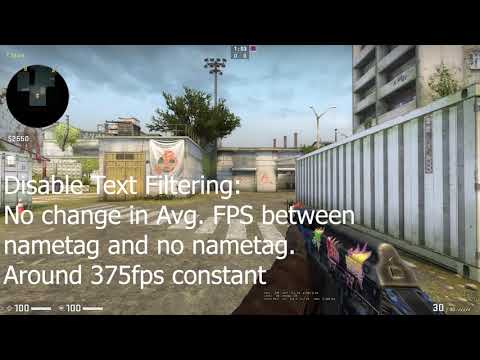 While 65 fewer frames on average may not seem like a lot, it really is. For players already on the lower end of the fps spectrum, it may render CSGO unplayable. Other users also reported their benchmarks, some seeing as much as 100 fewer frames on average with the feature enabled. As such, many have advised players to disable text filtering until Valve releases a hotfix. Apparently, disabling the feature immediately returns benchmark numbers back to normal.

The last two CSGO updates have garnered overwhelmingly positive support for the community. In particular, users appreciate Valve’s efforts at improving visibility and performance. It’s unfortunate, then, that such updates have caused breakdowns in other areas of the game. Hopefully, we will see an update addressing these issues soon.