These five stars stood out among all of their contemporaries during the tournament’s group stage. 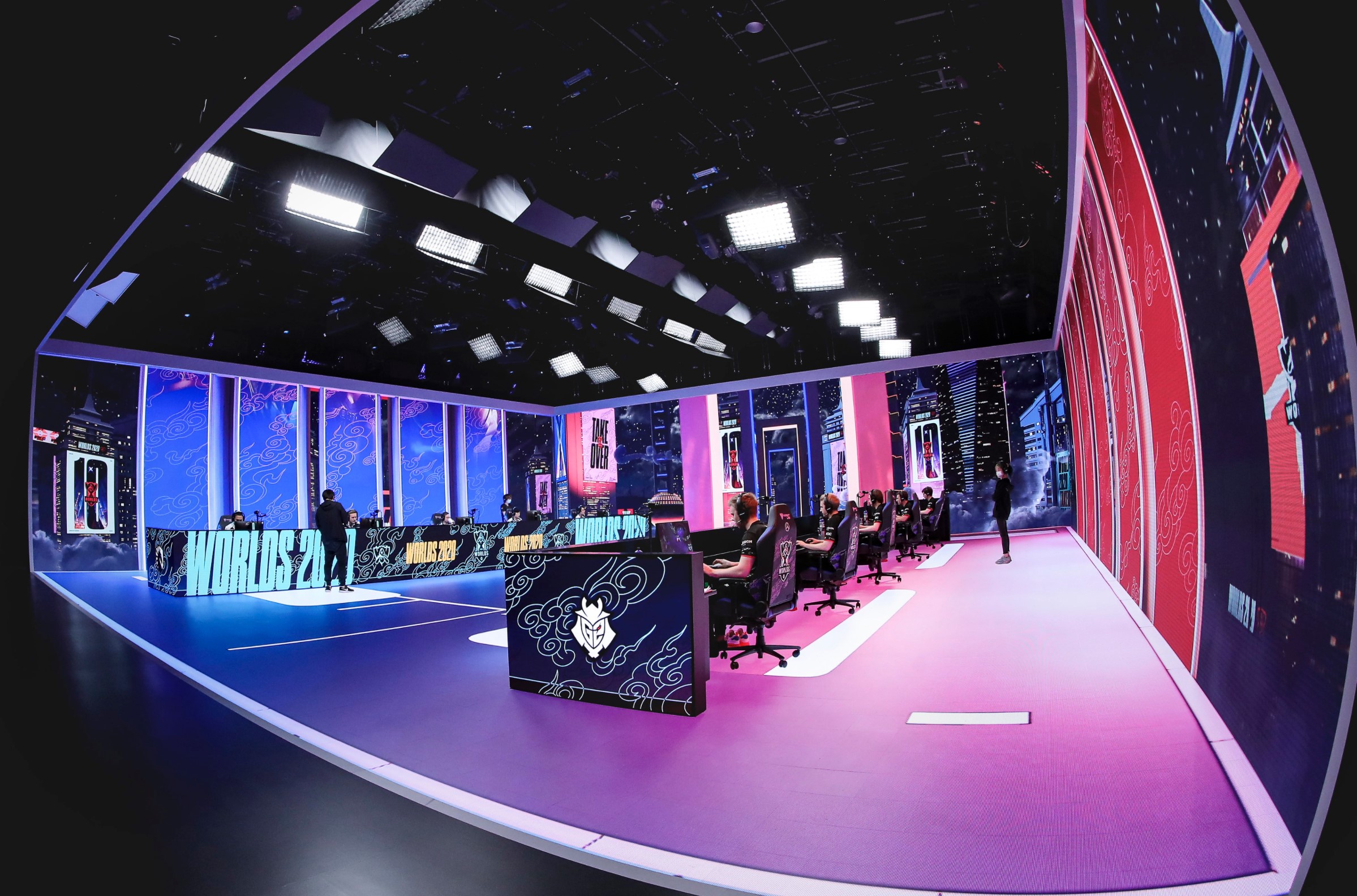 The 2020 League of Legends World Championship is just about halfway in the books with the play-in and group stages completely wrapped up. Now, with just eight teams left in the field of contenders, the focus of the tournament shifts to the knockout round, where the top-placing teams from the group stage will compete in the final leg of the tournament.

Each team represented among the top eight was carried to its current standing by exceptional performances from some of the most talented players in the world. With 80 players altogether competing at the tournament’s main event, it’s only natural for some to stand out above others.

Here are the top performers from each position at the Worlds 2020 group stage. 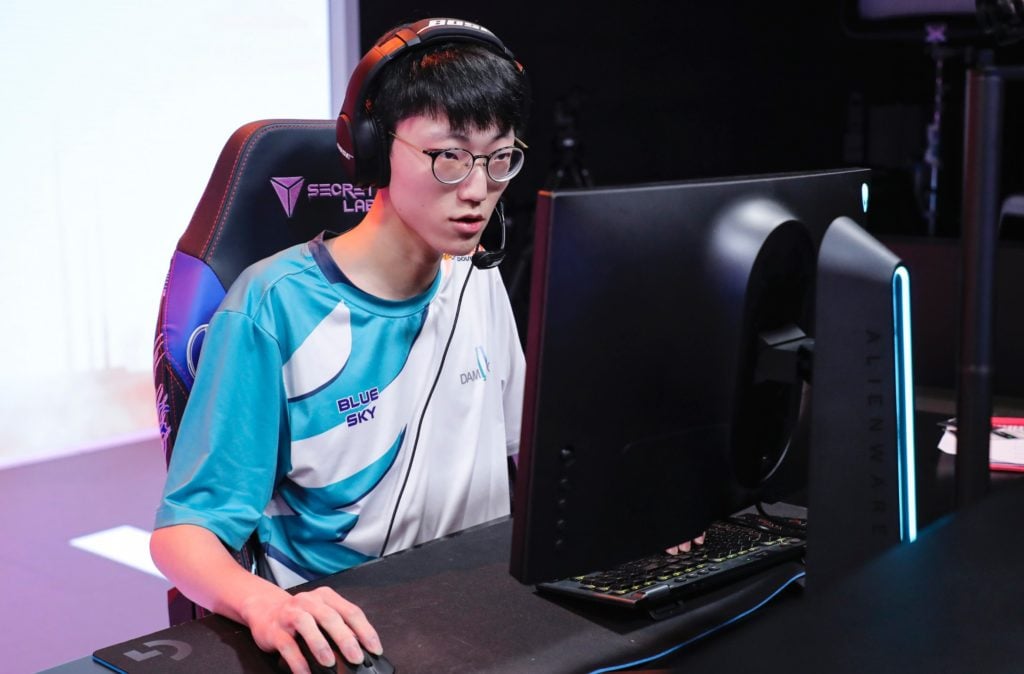 Coming into this year’s World Championship, there was absolutely no doubt that Nuguri had the potential to lead DWG to new heights. And after a near-perfect run to the quarterfinals, the All-LCK top laner and summer playoffs MVP did exactly that, dominating each and every one of his opponents at every stage of a given game.

From his proven abilities as a strong laner to his performances as one of, if not, the best teamfighting top laner at the World Championship, Nuguri put DWG on his back throughout the entirety of the group stage. Additionally, with successful performances on surprise, off-meta picks like Kennen and Lulu, Nuguri showcased the innovation and creativity that carried him and DWG to Worlds in the first place.

Despite playing the most isolated position in the game in terms of map presence, Nuguri made himself known time after time during the group stage. Over the course of DWG’s 5-1 run to the top seed in Group B, Nuguri posted a KDA of 4.0 with a KP of 67.1 percent, the second highest among all qualified top laners at the tournament, according to League statistics website gol.gg.

Moving into the quarterfinals, DWG will face off against its league-mate DRX, with Nuguri set to go head-to-head with Doran in that series’ top lane matchup. If he can have a similar performance in the bracket stage as he did in the group stage, Nuguri is a force not to be taken lightly. 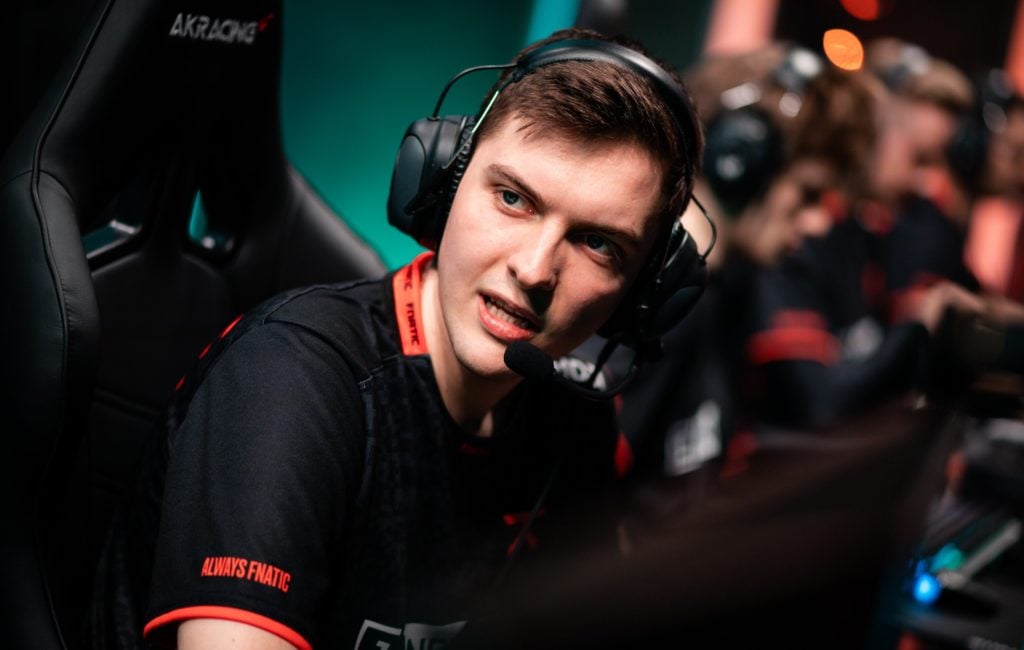 Selfmade, the breakout star of the 2020 group stage, stepped up when Fnatic needed him the most. After kicking off his tournament run with a dominant performance over TSM on his widely-acclaimed Evelynn, Selfmade continued to impress with a slew of diverse picks including Hecarim and Graves, the latter of which he played a total of four times throughout the group stage.

Selfmade’s CS/M of 7.6 put him solely on top of all qualified junglers at Worlds when it came to farming. His ability to take jungle camps across the map and build a foundation for Fnatic was a major reason why the team won four games and secured a berth in the quarterfinals. Additionally, Fnatic built most of their leads on Selfmade’s success; the jungler was ahead in gold, experience, and CS at 15 minutes in five out of Fnatic’s six contests.

And after showcasing his abilities against big name junglers like Clid and Peanut, Selfmade and Fnatic must now prepare for a quarterfinals opponent in Top Esports that’s sure to give the European sensation a run for his money. 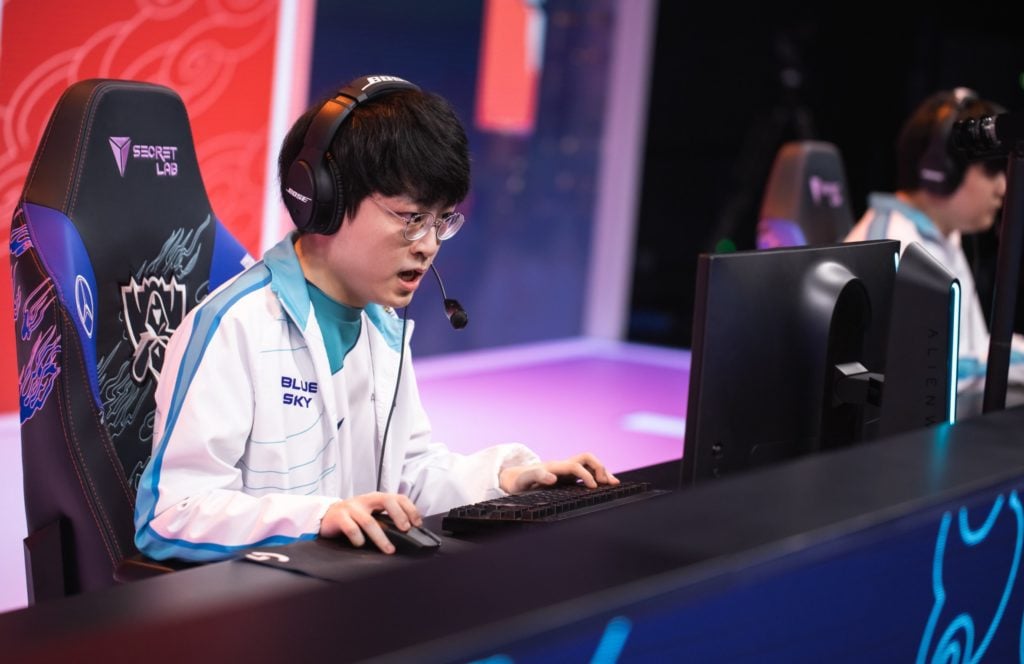 The LCK summer split MVP has yet to disappoint at Worlds. ShowMaker’s performance during the group stage was leaps and bounds above not only the entirety of Group B, but the field of his mid lane contemporaries at the tournament. No other mid laner compared to ShowMaker in a statistical sense over the last two weeks, as the DWG centerpiece racked up strong showing after strong showing, tearing a path through all of Group B.

ShowMaker’s only poor game of the group stage came in DWG’s lone loss of the tournament thus far. When matched up against JD Gaming in the Group B finale, ShowMaker posted a 5/6/5 scoreline in a 37-minute back-and-forth affair. Once the dust settled on DWG’s group stage run, ShowMaker had ended up with a KDA of 6.7, according to gol.gg, second only to DRX’s Chovy among mid laners at the World Championship.

But when that final performance is taken out of the equation and the games where ShowMaker was given the opportunity to shine on carry-focused mages like Twisted Fate and Syndra are taken into account, he posted a monstrous KDA of 16.6 across five dominant wins.

In addition to preparing for Nuguri in the top lane, DWG’s quarterfinals opponents, DRX, will also have to keep tabs on ShowMaker and his ability to completely run away with any game. 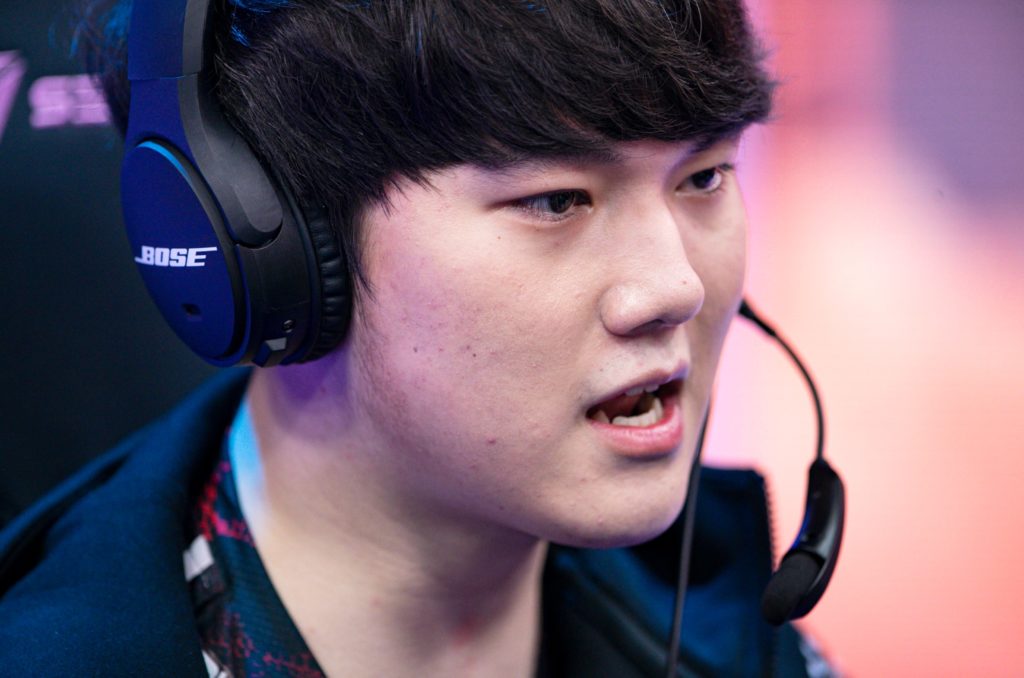 If there was one certain factor in Top Esports’ run to the quarterfinals, it was JackeyLove. The former world champion carried the LPL’s first seed to a 5-1 record in the group stage—enough to secure the top spot in Group D.

Not only was JackeyLove the strongest AD carry of the group stage, he performed the best out the 80 qualified players to hit the Rift at Worlds thus far. His statistical dominance at the tournament has been translating into convincing wins for TES.

Now, with the quarterfinals on the horizon and Fnatic in JackeyLove’s sights, the matchup between him and longtime veteran Rekkles will be one to watch out for as the tournament moves into the bracket stage. But if JackeyLove’s group stage performance is any indicator of how things might play out, it would be reasonable to expect more proven supremacy over the rest of the field at Worlds 2020. 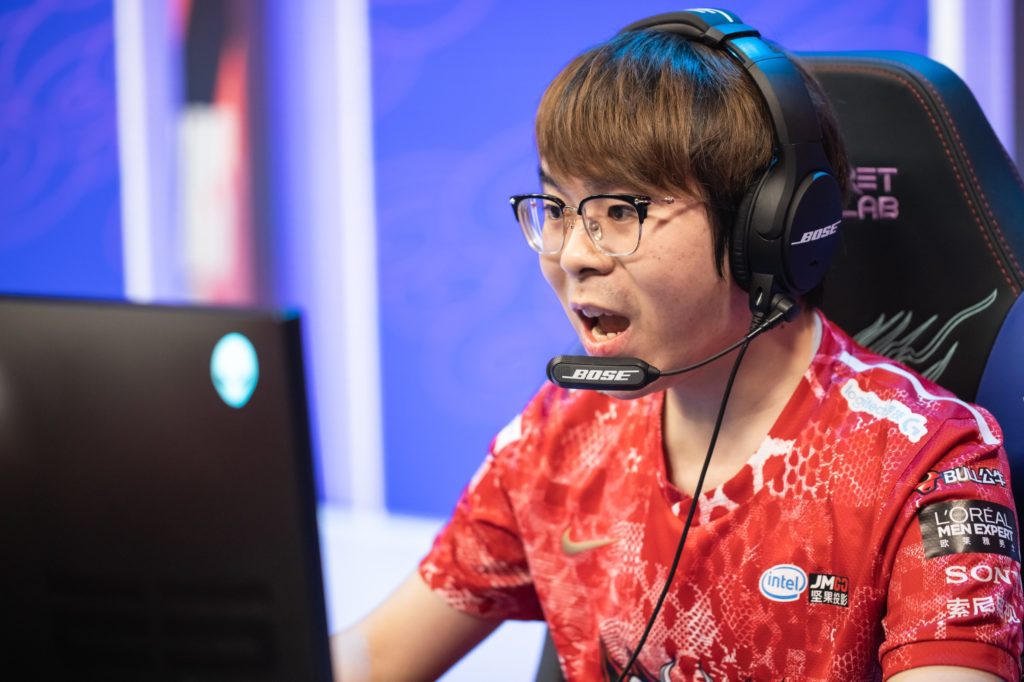 Despite not finishing atop Group B, Lvmao performed exceptionally well in JDG’s effort to reach the quarterfinals. Across the six games it took JDG to secure a berth in the tournament’s bracket stage, Lvmao played five different champions, showcasing strong depth and diversity. His Bard play in particular allowed JDG to secure two big wins against Rogue and DWG, in which he was able to post a combined KDA of 1/6/35.

His damage percentage of 12.0 was the second highest among all qualified support players at the group stage, according to gol.gg, clearly displaying JDG’s willingness to allow Lvmao to take on an increased role. Additionally, his kill percentage of nearly 78 percent was the third highest among all players at Worlds over the course of the last two weeks. If anything, Lvmao’s consistency and active nature was a deciding factor in his standout performance during the group stage.

Outside of one lackluster game against DWG on day one of the tournament, Lvmao played with a certain sense of agency and flair that allowed the LPL’s second seed to advance deeper into the tournament. Now, with JDG set to face off against one of its LPL counterparts, Suning, in the quarterfinals, look for the battle between Lvmao and SwordArt to turn a few heads.

Somebody Made An Open World Fantasy RPG In...