When the pandemic was raging across Europe last spring, many politicians and health experts were optimistic that a new generation of tracing apps could eventually help keep COVID-19 at bay. France was one of the many countries to seize on this idea, but its controversial approach has failed to have an impact and is instead becoming a cautionary tale.

In a report issued this week, a national committee charged with reviewing the nation’s COVID-19 response called for the government to reinvest in promoting the app, which has so far generated few notifications. In theory, someone who has the app installed on their smartphone will receive a notification if they have recently passed within a short distance of someone who reported a positive diagnosis via the same app.

The app has seen only about 2.4 million downloads among a population of 67 million. Even worse, the report estimates that around 700,000 users uninstalled it and many of those who install the app never activate it.

The reports rebuked the government for failing to do enough to encourage users to download and activate the app.

The committee “questions the consistency of the policy pursued and calls for the government to be consistent,” the report says. “A first step would be to launch an information campaign on the StopCovid application.”

Renewed conversation about the StopCovid app comes as the country is experiencing daily case rates that exceed the rates seen last spring, when the country went into lockdown for two months. 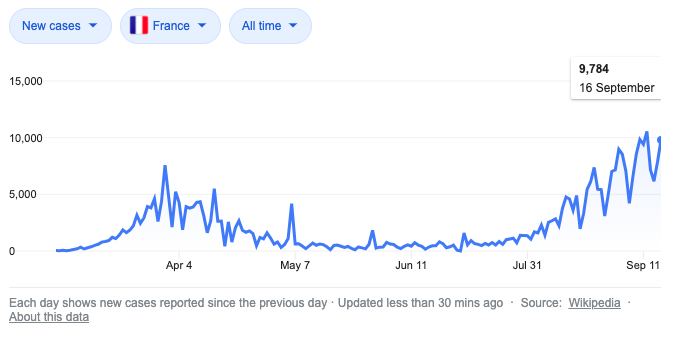 In part, the higher numbers are being driven by more widespread testing. The county has increased its capacity to test by six times since the spring, according to Reuters, and big cities, in particular, are testing on a large scale.

While experts note that deaths and hospitalizations lag behind cases, so far France hasn’t seen the number of deaths reach anything close to the numbers seen in the spring. 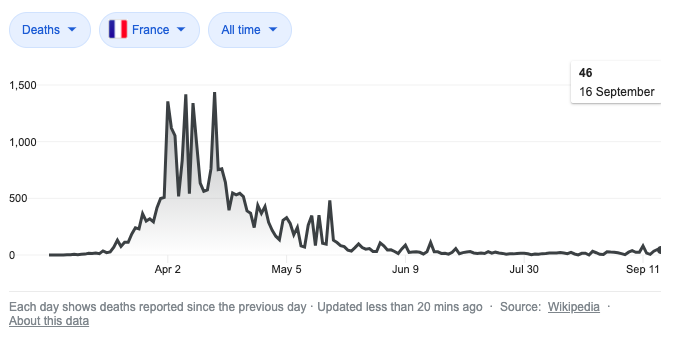 Still, government officials at the national and local levels have been slowly reimposing restrictions in an effort to combat the rise in cases. However, it doesn’t seem likely officials will be able to count on much help from the StopCovid app.

The French government launched its app in June but the effort sputtered almost from the start. During its first eight days, the app had a reported 1 million downloads. In contrast, Germany released its app on June 16 and reportedly saw 10 million downloads in three days.

The figures for France remained disappointing over the summer. In a report by Sensortower in mid-July, an average of 9.3% of residents in 13 countries had downloaded some kind of COVID-19 tracing app. In France, the figure was only 3.3%, compared to 14.3% in Germany.

To be fair, researchers argue that the majority of these tracing apps have not reached the adoption rates needed to be effective. But France remains a particular case because the COVID-19 app it released uses a centralized system that collects data on a remote server and performs potential matching there.

Most countries that built a tracing app adopted the contact tracing API designed by Apple and Google that works across Android and iOS devices while keeping data decentralized. French officials felt this didn’t give them enough control and opted to forge ahead with their own solution. Privacy groups criticized this approach and accused the otherwise privacy-obsessed French politicians of being hypocrites. StopCovid also triggered a confrontation with Apple, which refused to enable such an approach on its devices.

More than three months later, French officials are refusing to acknowledge any mistakes in their technological and privacy decisions. Instead, Prime Minister Jean Castex and Digital Minister Cedric O, who oversaw the development of StopCovid, have insisted the problem comes down to a failure to properly promote the use of the app. The COVID-19 committee echoed that sentiment.

With so much news focused on rising cases, the committee urges a renewal of those promotional efforts. Such a campaign would seek to convey steps the government took to protect privacy, even as it uses a system privacy advocates continue to criticize.

With higher adoption, the app’s developers would hope to gather enough data to improve any technical shortcomings. The committee also pointed to a program in the overseas territory of French Guiana, where text messages sent to all smartphone users resulted in thousands of downloads in a short period.

The committee believes “the StopCovid application should be ‘relaunched’ allowing, on one hand, to identify possible avenues for improving the application and on the other hand to help users better appreciate its usefulness in ‘real life.’ The rebound of the epidemic is favorable to a campaign to promote this application.”

Conservative senator Patrick Chaize went so far as to suggest that the government consider making the use of the StopCovid app mandatory, though there seems little support for such a step. There were also whispers that the government could give users of the app testing priority, though some argued that would be illegal, possibly running afoul of Europe’s GDPR rules.

That the government is sticking with the current architecture of its StopCovid app isn’t surprising. It likely has too much invested in the app, from development resources to the various support systems that determine steps people should take if they receive a notification.

If it can’t get enough users, it will miss a chance, however small, to get enough data to see whether its technical approach works or not. Beyond the failure to slow transmission of the disease, that represents a missed opportunity to learn from any mistakes so the country will have an effective app in place for the next pandemic.