It wasn’t long ago that truly wireless power at a distance seemed like a technical pipe dream, but promising new approaches (and lots of venture capital) have brought it closer to reality than ever before. One firm at the forefront is Seattle-based Ossia, which in June received approval for its 2.4GHz Cota wireless power system under both Parts 15 and 18 of the Federal Communications Commission’s (FCC) rules governing electromagnetic compatibility. This cleared the way for the company to market and sell its products in the U.S. and catapulted it to the ranks of rivals who’d also passed the FCC’s muster.

Ossia has attempted to carve out a niche for itself in the lucrative commercial, enterprise, and industrial sectors, but it’s laying the groundwork for a consumer launch of its technology within the next few years. In something of a case in point, today it announced the launch of Cota Home, a 30 x 30 centimeter reference design for a transmitter that can power multiple devices in a 30-foot range.

“Consumers drive technological revolutions, and Cota Home can bring real wireless power to everyone, including people at home and in small business environments,” said Ossia CEO Mario Obeidat. “Just as Wi-Fi routers drove mass adoption of the internet, Cota Home can free millions of homeowners from batteries, cables, charging pads, and wires and allow them to leverage wireless charging at a distance instead.”

Cota Home, which Obeidat says is designed to fit within a home, home office, or small business environment, operates on the 5.8GHz frequency, enabling it to deliver roughly 4 times greater power than Ossia’s 2.4GHz technology with less susceptibility to interference. (It’s worth pointing out that Ossia has only received approval for one-meter power transmission over 2.4GHz, although it says it’s actively working with the agency to attain certification for 5GHz.) It connects to a power source and is managed through Ossia’s Cota Home service, chiefly via a dashboard dubbed Cota Cloud or a companion mobile app. 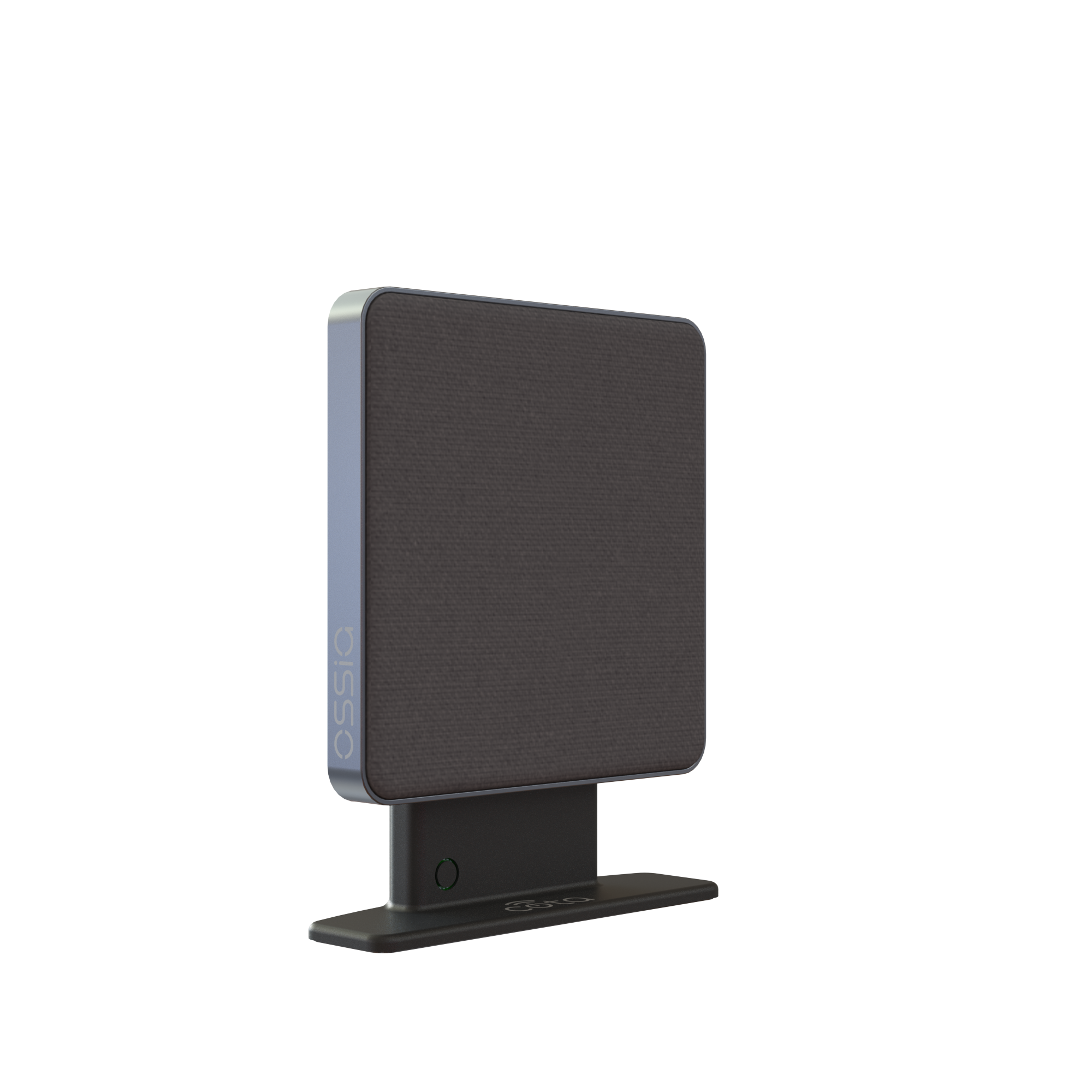 Above: The Ossia Cota Home concept.

Cota Home begins automatically charging all in-range devices equipped with receivers, and it’s a part of Ossia’s 5.8GHz reference design kit, a full stack solution for OEM customers and partners. Obeidat — who stresses that the transmitter doesn’t interfere with Wi-Fi or other wireless technologies, like Bluetooth — believes it’ll spur device makers like Spigen, which last year committed to releasing a range of wireless power transmitters and smartphone cases compatible with Ossia’s tech.

“We predict Cota Home will drive demand for more wireless power-enabled devices, and manufacturers will have more incentive to create products that are environmentally safe (no batteries or chargers required), lighter, and 5G-ready,” Obeidat said. “Real wireless power represents a significant evolutionary leap that can inspire innovative new products while reducing the heavy environmental toll of batteries and wires.”

If you aren’t familiar with Ossia’s Cota platform, here’s a quick primer: Unlike most “wireless” charging tech on the market, Cota doesn’t require line-of-sight access. Rather, it uses thousands of antennas embedded in transmitters that communicate with compatible transceivers. When a device starts running low on power, those antennas emit microseconds-long beacon signals that reflect off walls, furniture, and other obstacles until they reach a transmitter, which triangulates the beams to pinpoint the transceiver’s location and then sends power along those paths.

Cota’s first-generation transmitter could send about 1 watt to a smartphone sitting three to six feet away, while its Cota Tile product could charge devices up to 30 feet away (or 50 feet, with two transmitters working in tandem).

In September 2018, the Bellevue, Washington-based startup said it would team up with Walmart to help the retailer cut costs in its thousands of stores, Ossia’s fourth such partnership that year. Building on this commitment, the company revealed last May that it’s collaborating with T-Mobile to develop a first-of-its-kind, wirelessly powered internet of things (IoT) asset-tracking solution that will be piloted in Walmart distribution centers later this year, ahead of a production run in 2020.

It’s a meaningful step toward a mass-market launch for Ossia, which has raised more than $35 million to date and counts smartphone accessory maker Spigen among its growing list of partners. But the company faces competition from Powercast, a startup founded in 2003 that is developing an at-a-distance wireless power system, and Energous, which is licensing transmitters that can send power through the air to devices up to 15 feet away. Like Ossia, Energous and Powercast are developing Part 15- and Part 18-approved products.

However, unlike some of its rivals, Ossia is no newcomer to at-a-distance charging. Roughly a decade ago, the company developed its first wire-free, over-the-air transceiver that could beam electricity to devices anywhere within range. In the years since, it has released kits that include a wirelessly powered AA battery replacement (the Forever Battery); licensed designs to antenna companies; built out a cloud-hosted management platform; and recruited ecosystem partners like Displaydata, Molex, and Motherson.