The Donkey Kong series has been a staple of side-scrolling platformers for years. Part of what makes it special is its characters and their unique abilities. The Donkey Kong games would not be what they are without giving special thanks to the Animal Buddies.

The Animal Buddies are friends of the Kongs. In various levels throughout the series, these friends are in crates and, if rescued, can be ridden and utilized to defeat enemies, manoeuvre through levels, or offer an ability that is needed to traverse through various obstacles. In the series, there have been many Animal Buddies, but these stand out as the best of the best. 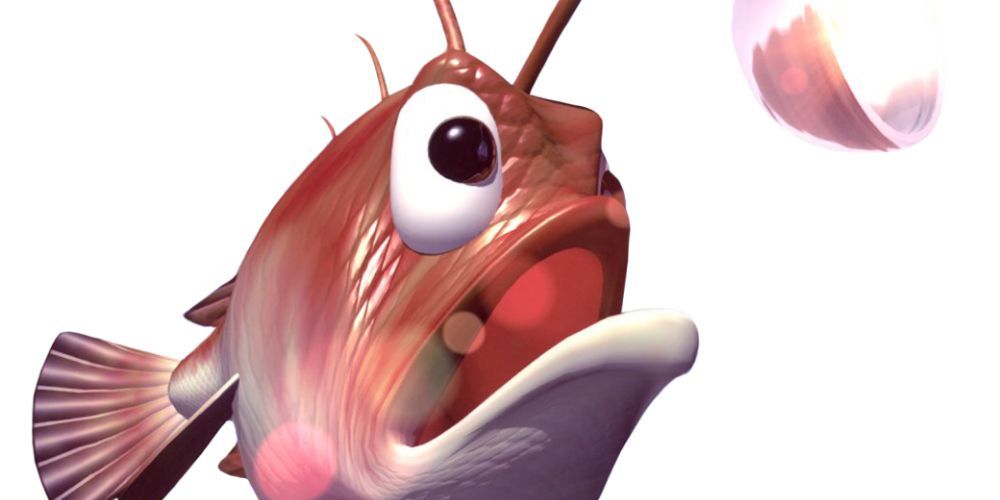 There have not been a lot of water levels throughout Donkey Kong, but for those that do exist, it’s always helpful to have a friend. Though Glimmer only makes a single appearance in the entire series – Glimmer's Galleon in Krem Quay – he’s still extremely helpful. He uses the lantern hanging from the stalk coming out of his head to allow Diddy and Dixie Kong to see as they swim around the darkened level. He’s key to avoiding enemies and finding the secrets scattered across the level. 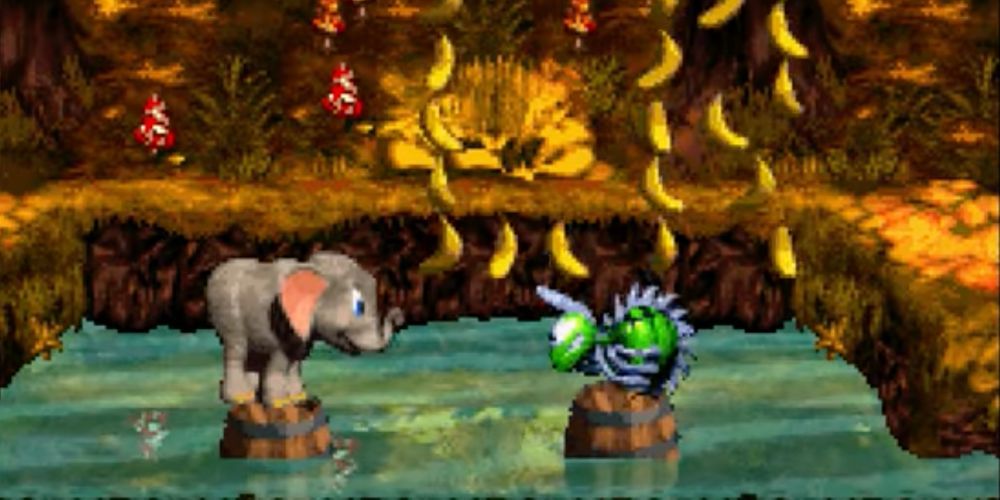 It’s a well-used trope in pop culture that elephants are afraid of mice and small creepy crawlies, and Ellie is no different. While most of the Animal Buddies can be harmed, Ellie will just run away in the opposite direction if she sees a mouse.

She does have some fun abilities like storing water in her trunk to shoot out and carry barrels around that can be used to roll toward enemies. The former is even used in a boss battle against a very curious waterfall creature. 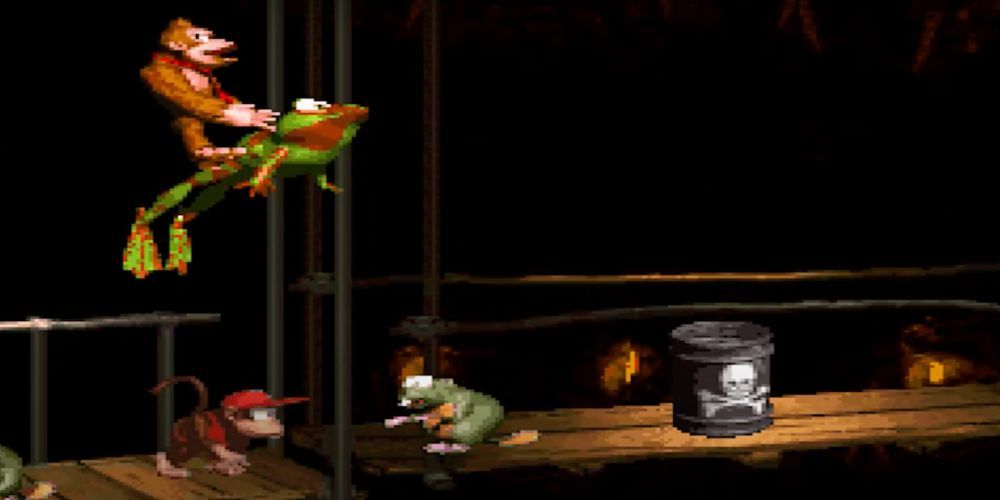 Winky the Frog’s first appearance is in a level called Winky’s Walkway, named after this froggy Animal Buddy. In it, Donkey and Diddy Kong traverse on high, rickety walkways. Near the beginning of the level, you’re able to unleash Winky from his box and ride him for its duration. Winky is very fast and able to jump super high. Besides this level, Winky is in three others. Sadly, Donkey Kong Country would mark his only playable appearance as later he is replaced with Ratty the Rattlesnake. 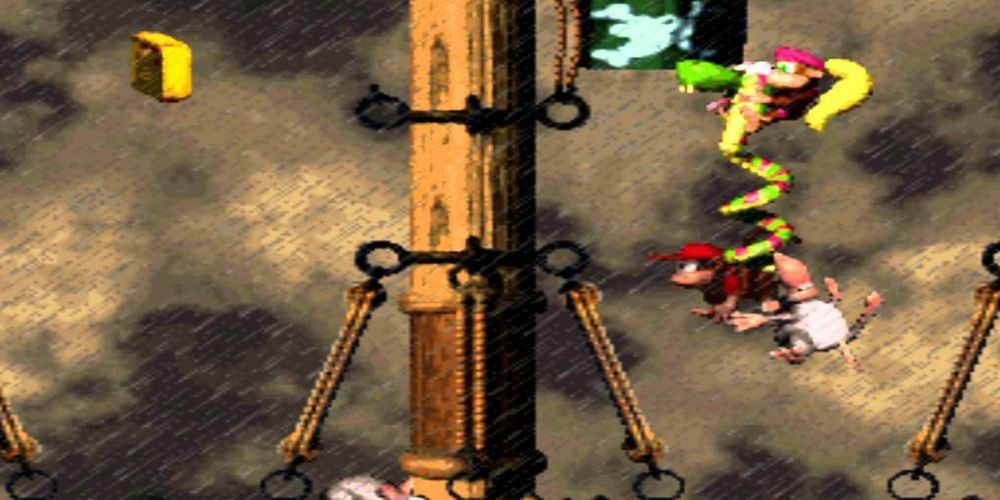 It’s hard to find snakes creepy when they’re as cute as Rattly. As previously mentioned, he replaces Winky the Frog in Donkey Kong Country 2. Despite his name, he actually has no rattle on the end of his body. He is a deadly Animal Buddy, though, and players are even able to use him to kill Zingers, the bee or wasp-like enemies found throughout the games. He also lets the Kongs jump extremely high when riding him. 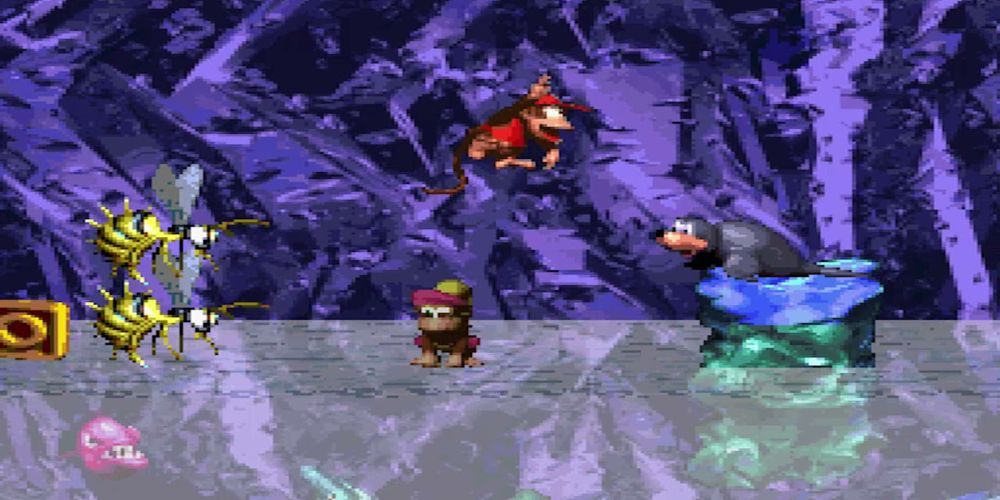 Clapper the Seal is a really unique case in the world of Donkey Kong. He is one of just two Animal Buddies that appears multiple times throughout a level. He is also one of a few that you do not control. Instead, you jump on his back to help control the water. He is able to turn lava into water for the Kongs to traverse safely through. He also makes a very cute seal noise when jumped on. And don’t worry, no seals were harmed! 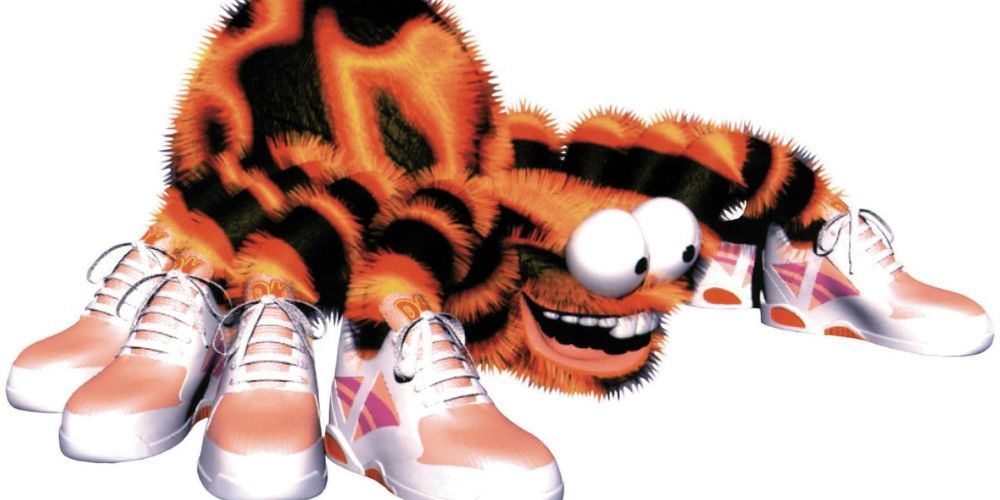 Everyone loves a character that can be used in multiple ways, and Squitter the Spider can do it all. First off, though, a special shoutout goes to his eight sneakered legs. When he’s not being a fashion icon, Squitter can fire webs at enemies to kill them. He can also create webbed platforms to climb while the Kongs ride him. He is extremely useful in getting to hard-to-reach places and avoiding enemies if you’re in a tight spot. 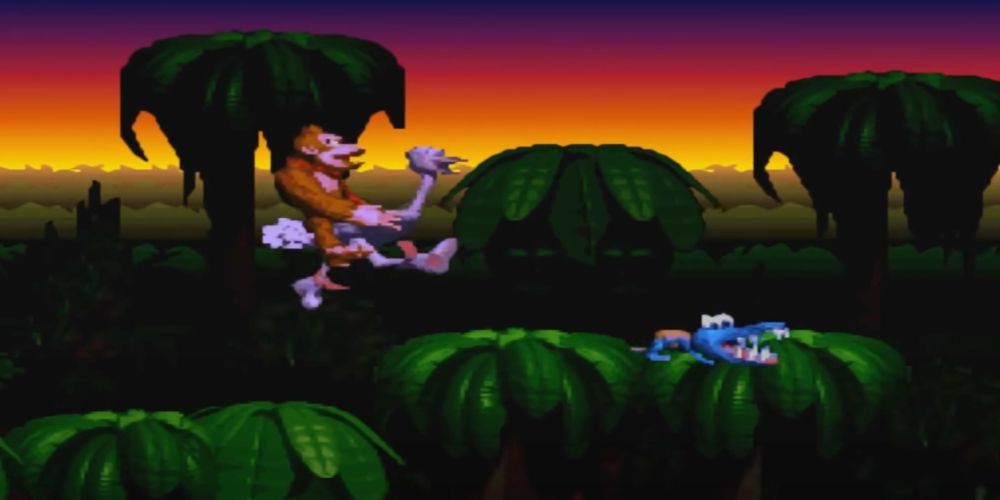 Like Squitter, Expresso also wears a pair of fashionable sneakers. Similar to his real-life counterpart, Expresso is very fast, agile, and can fly short distances. While he is unable to attack enemies, his speed and ability to manoeuvre around them more than make up for it.

Though he only appears as a rideable Animal Buddy in Donkey Kong Country, he is still one of the most iconic friends that you can recruit in the series. He is also a lot of fun to use in the bonus areas where you must fly around and collect the small, golden Expresso-shaped tokens. 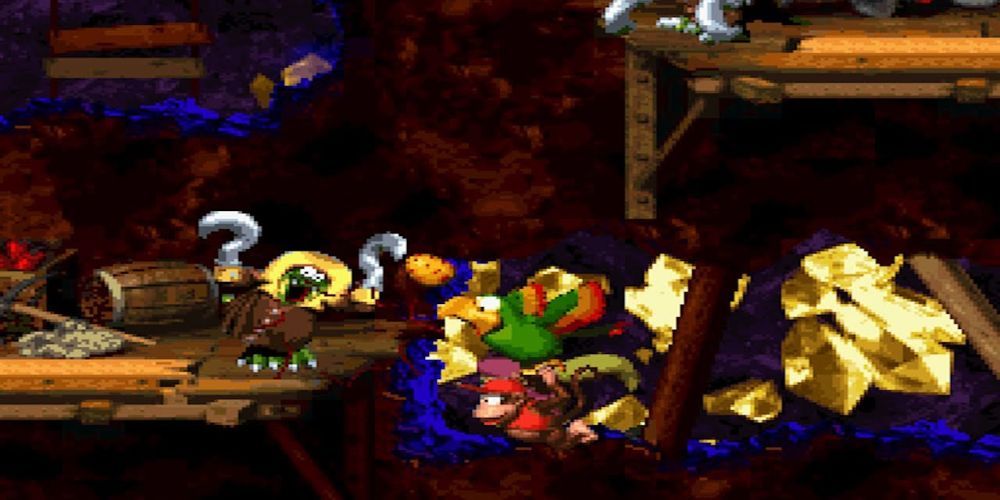 Throughout the series, Squawks has appeared more than any of the other Animal Buddies. In his first role, he guides Donkey and Diddy Kong through a dark cave using a lantern. Later on in the series, he carries a Kong around and this allows you to fly. He can also shoot projectiles to harm most enemies.

This skill is even used in the boss battle against the giant Zinger making Squawks the first Animal Buddy to participate in a boss battle. In Donkey Kong 64, he’s a bit of a jack of all trades and does many things from acting as a guide to the Kongs to guiding the way with a lantern. 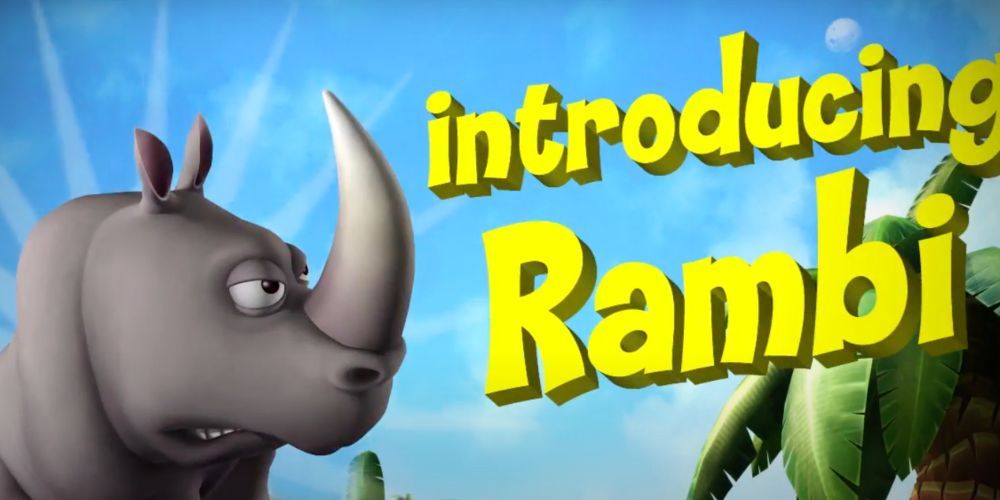 Rambi is perhaps the most iconic and well recognized of all the Animal Buddies. He appears in the very first stage of Donkey Kong Country and is loved for how versatile he is. Not only can he move fast by charging up his run, but he also can defeat almost any enemy in the game. He’s also able to break through boulders and secret entrances to play various bonus games. Rambi is vulnerable to fire, however, so be sure to watch out for any flame-flinging foes. 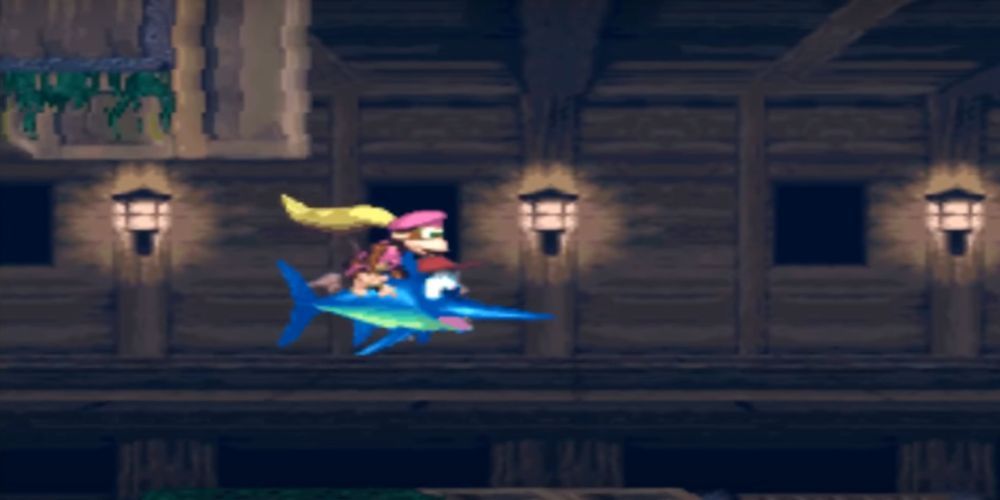 Enguarde the Swordfish is known for his swashbuckling ways under the sea. A friend of the Kongs in many underwater levels, he is rideable and can use his long pointed nose to fight enemies. He is the only way the Kongs can attack enemies while underwater. He is quick and also has a powerful and fast-moving charge-up attack that can blast through multiple enemies.

Enguarde is also utilized in a boss battle in Donkey Kong Country 3. Besides his usefulness, he is just so much fun to ride, and because he is the only way the Kongs can knock out enemies underwater, he is the best Animal Buddy in the series.