Fans of point-and-click adventure games are rejoicing that famed game developer, Ron Gilbert, brought a whole new pirate adventure in the form of Return to Monkey Island. It's been an incredibly long time since the players got to experience the swashbuckling shenanigans of Guybrush Threepwood. This modern entry in the venerable series picks up directly where Monkey Island 2: LeChuck's Revenge left off.

If you are someone that dove headfirst into this newest iteration in the Monkey Island series but are still craving more point-and-click adventure game goodness or even more pirate action then there are plenty of similar games to check out. While point-and-click games and pirate games don't come around the modern gaming landscape too often, there are fortunately a smorgasbord of wonderful titles both past and present to satiate your gaming needs. 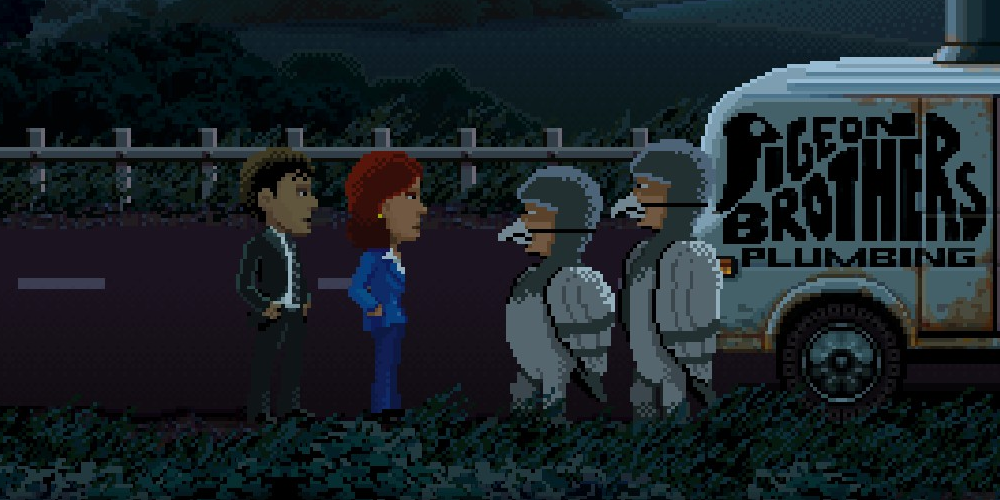 Thimbleweed Park might just be the closest you can get to a pure, modern point-and-click adventure game, one that is actually created by Ron Gilbert and Gary Winnick. Thimbleweed Park is a comedically satirical yet often creepy and mysterious game set in and around the titular location. If you think of a funnier version of X-Files then you get the idea here in Thimbleweed Park.

The game centers around five unique characters who must work together to solve the conundrum of a dead body, a fire, a haunting, plus many other surprises. In true point-and-click fashion, you will scour locations for clues while solving tricky puzzles. Oh, and expect plenty of laughs and chortles along the way.

10 The Book Of Unwritten Tales 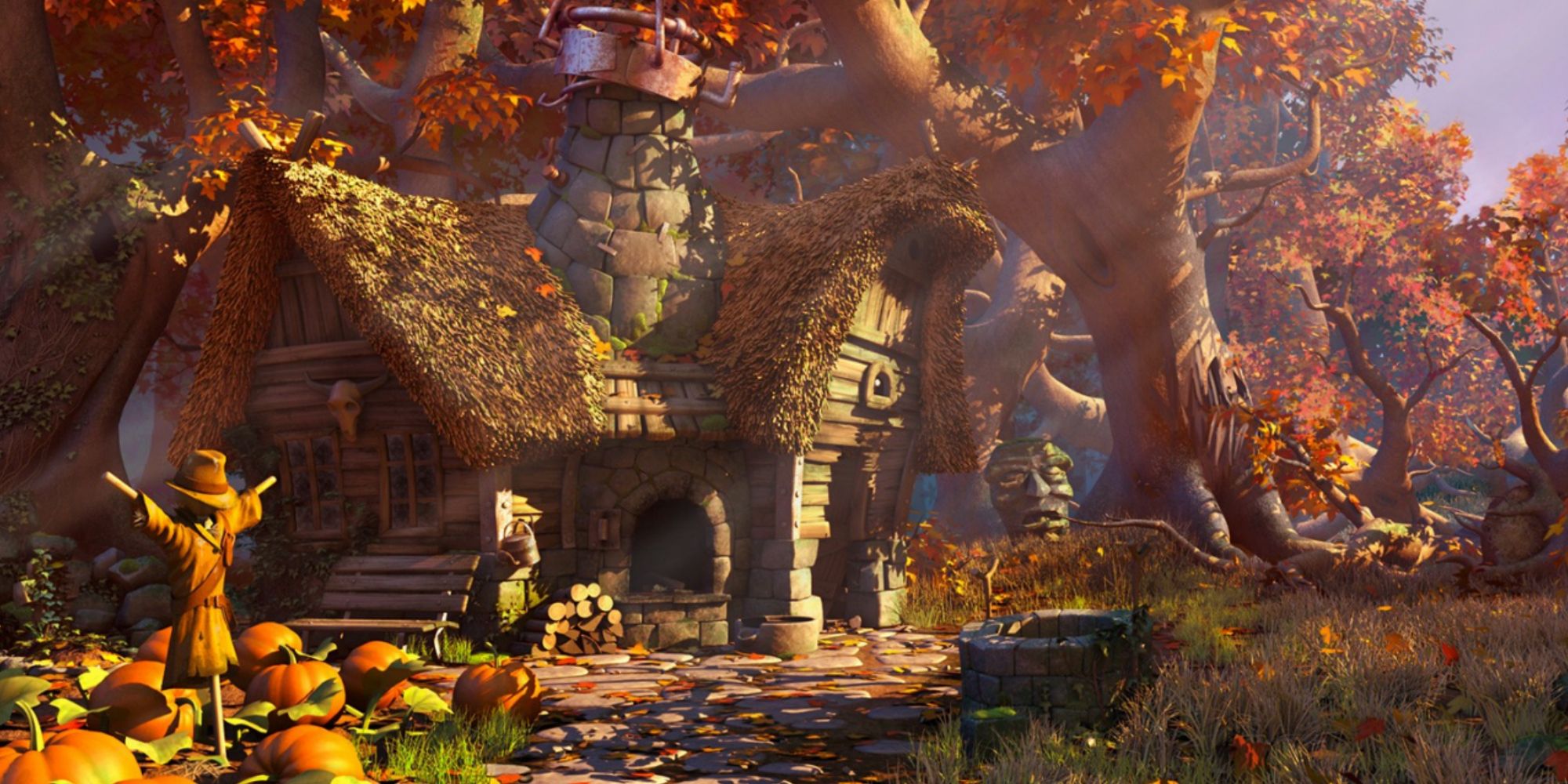 For something a bit more fantastical, filled with plenty of whimsical humor and medieval zaniness then look no further than The Book of Unwritten Tales. This beloved cult classic point-and-click adventure game tasks you with uncovering the mystery behind a powerful artifact that happens to be housed by the famous gremlin archaeologist, Mortimer MacGuffin.

You will explore a host of fantasy locations while gathering hundreds of unique items that need to be utilized and combined in order to solve the game's dastardly puzzles. The Book of Unwritten Tales is both cozy and charming while still providing plenty of surprises and laugh-out-loud moments. 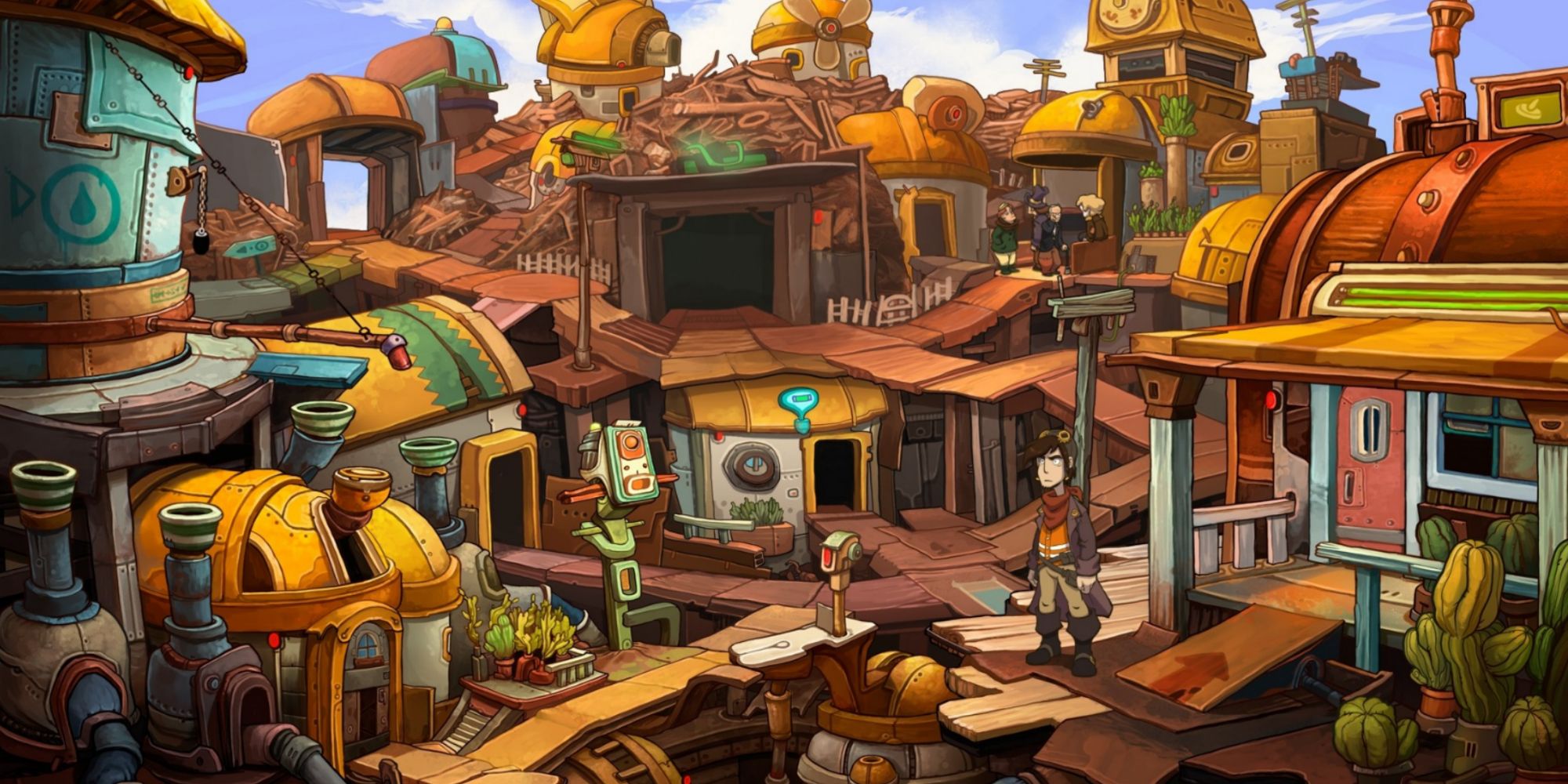 Deponia is a unique and hilarious point-and-click adventure game starring two unlikely heroes, Rufus and Goal. Taking place in a quite literal garbage dump of a world, this strange fantasy game tasks you with figuring out why certain people get to live high in the lofty sky houses while others must scratch out their existence in the smelly pile of trash below.

While the game might sound quite comical and satirical (which it is), this game will still challenge even the most grizzled genre fans with punishing puzzle experiences. Fortunately, the humor is there to soften the edge a bit but this is about as pure as a point-and-click game comes.

8 Under The Jolly Roger 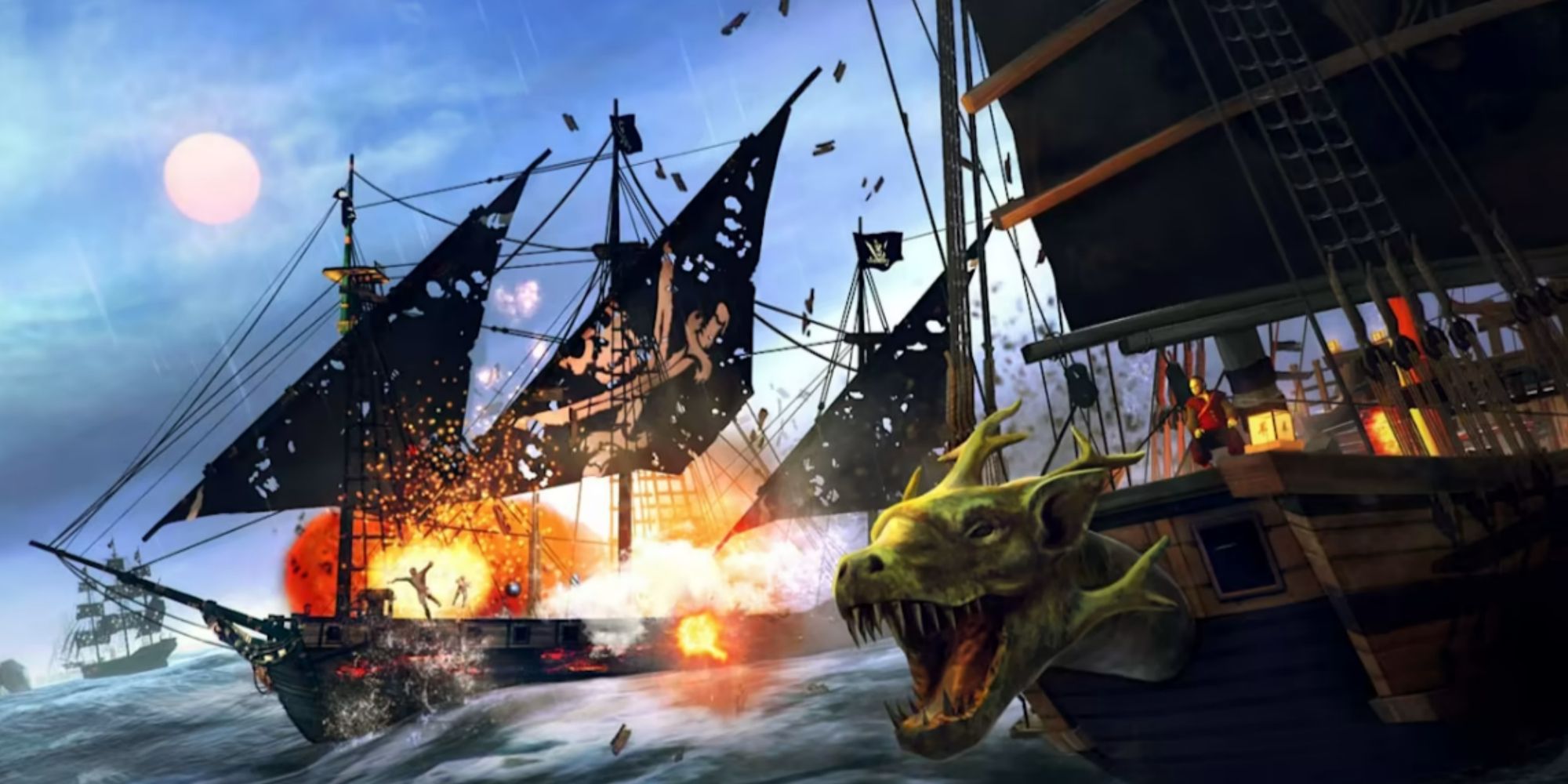 For something completely different, at least in terms of gameplay, then look no further than the swashbuckling experience Under the Jolly Roger. This hidden gem indie game is all about living a pirate life on the high seas. Part open-world game, part management game, and part pirate action game, Under the Jolly Roger (while not perfect) provides a compelling pirate-themed adventure to take part in.

What makes this game particularly special is the combination of gameplay elements. A bulk of the gameplay comes from taking part in large ship battles and gathering supplies from sunken vessels. These supplies can then be used to upgrade your crew and your pirate ship. On top of that, you can also make for land in order to take part in swordfights against a variety of creatures. 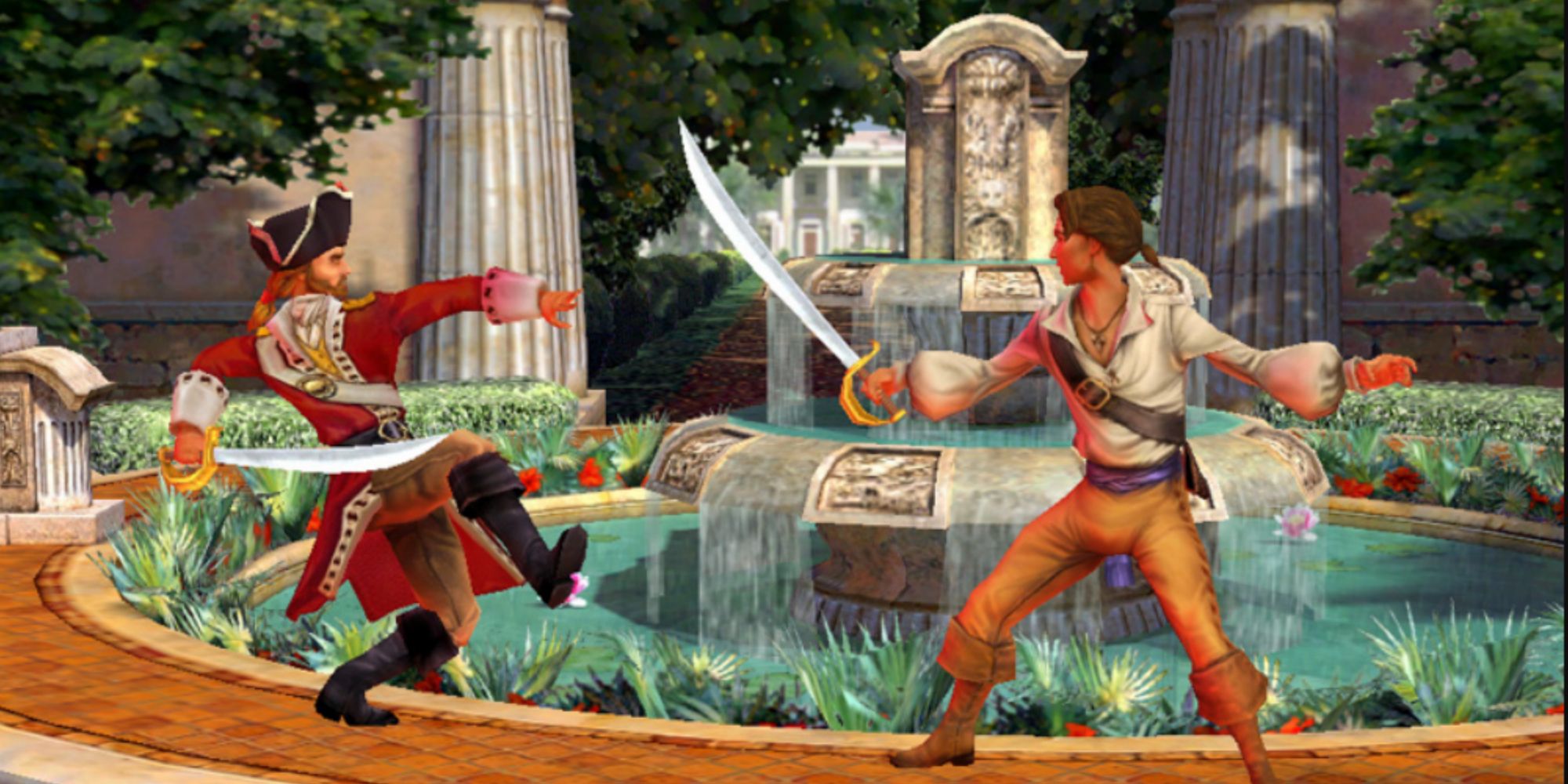 Sticking to the pirate theme, another fantastic game to check out is Sid Meier's Pirates! This cult classic game continues to be discussed even decades after its initial releases. For the uninitiated, Sid Meier's Pirates! is a game that wants you to live out your pirate fantasy. From intense one-on-one swordfights to elegant dancing scenarios (yes, you read that right), to high seas adventures, this game will keep you in the throws of excitement.

The game might feel a bit dated by modern standards and mostly feels like a compilation of minigames, however, its best selling point is that it perfectly encapsulates the golden age of piracy in the Caribbean. 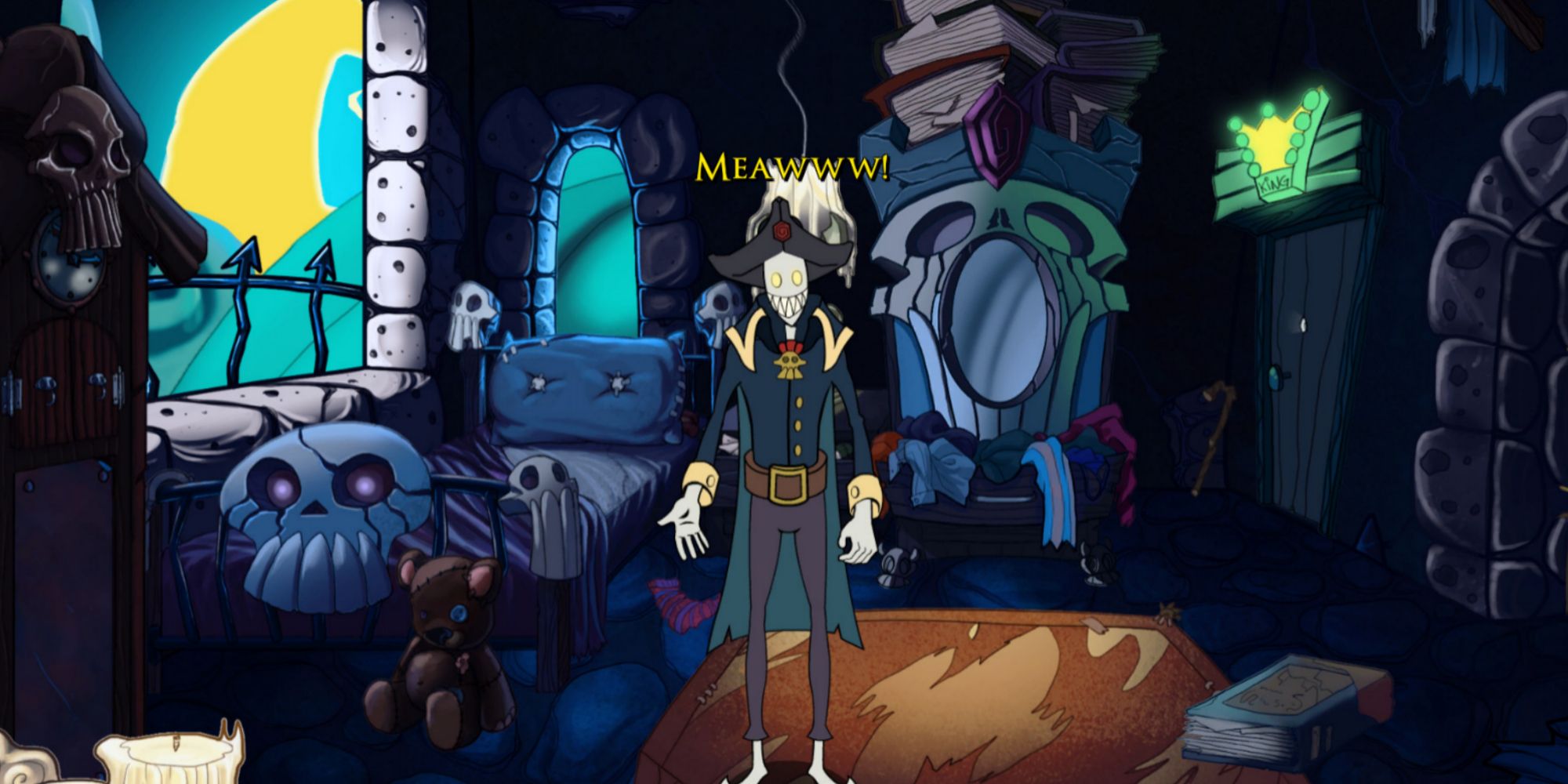 It's a real shame that Darkestville Castle isn't discussed much in the modern point-and-click adventure discourse. This genre indie hidden gem should be sought by fans of all things pointing and clicking. In Darkestville Castle you step into the spooky shoes of Cid, an evil character who just doesn't quite understand why others in the town of Darkestville won't go along with his maniacal plans.

During your adventures in Darkestville, a place that feels straight out of a Tim Burton film, you will be thwarted by your arch-rival, Dan Teapot. Gameplay here is pretty standard when it comes to the genre, mostly requiring you to scour every nook and cranny in each cozy and spooky location. Solving puzzles and chatting with NPCs will be the norm as you guide Cid through this humorous adventure. 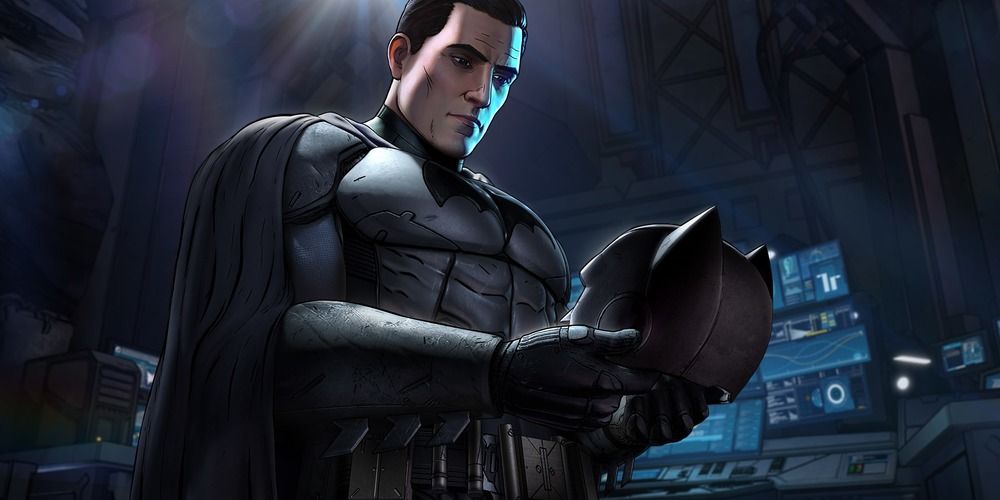 While Telltale might not quite be the studio they once were in the original days of their Walking Dead series, one of their best showings was easily Batman: The Telltale Series. Fans of the Dark Knight really flocked to this game since it took a mature look inside the mind of the man behind the mask: Bruce Wayne.

Spread across five different episodes, this narrative-driven adventure game allows you to see parts of Bruce Wayne that are rarely seen in many of the Batman films or games. In true Telltale fashion, this Batman outing has you make challenging decisions that can provide for sweeping changes to Bruce's inner circle and Gotham City at large. 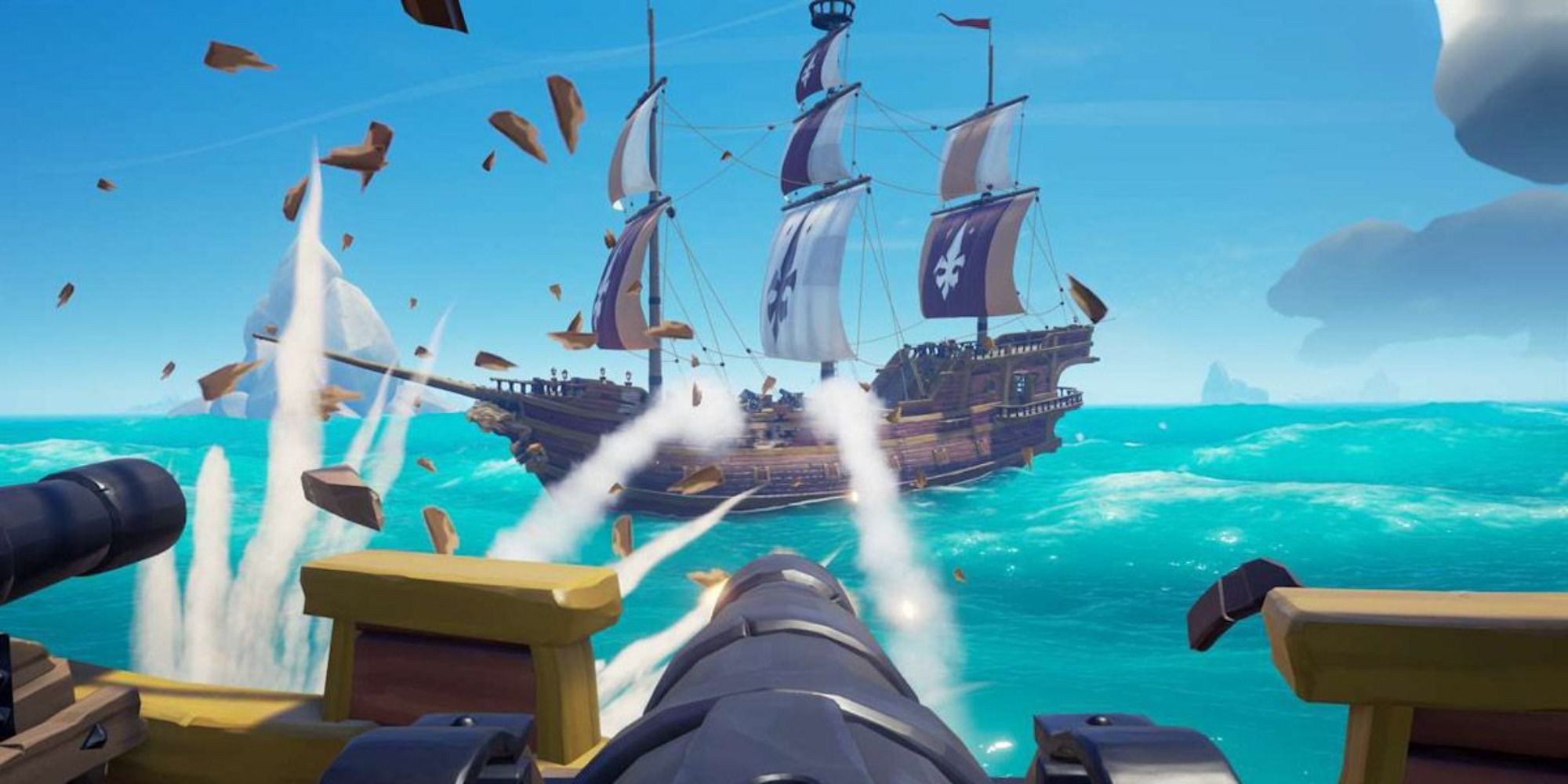 Sea of Thieves might be the farthest thing from Return to Monkey Island in terms of gameplay, style, and even narrative, however, it unabashedly thrives in making you feel like a pirate out for an adventure. Sea of Thieves likely needs no introduction as it has quickly become a juggernaut in the multiplayer live service space but for those not in the know, this game allows you and your friends to live out your wildest pirate fantasies.

From commandeering your galleon to customizing every aspect of your pirate to taking on devious quests for the game's various factions, legendary developer Rare, really stepped up their game when it comes to freeform exploration and gameplay. Just be sure not to drink too much grog before playing your herdy gerdy on the helm of your pirate ship. 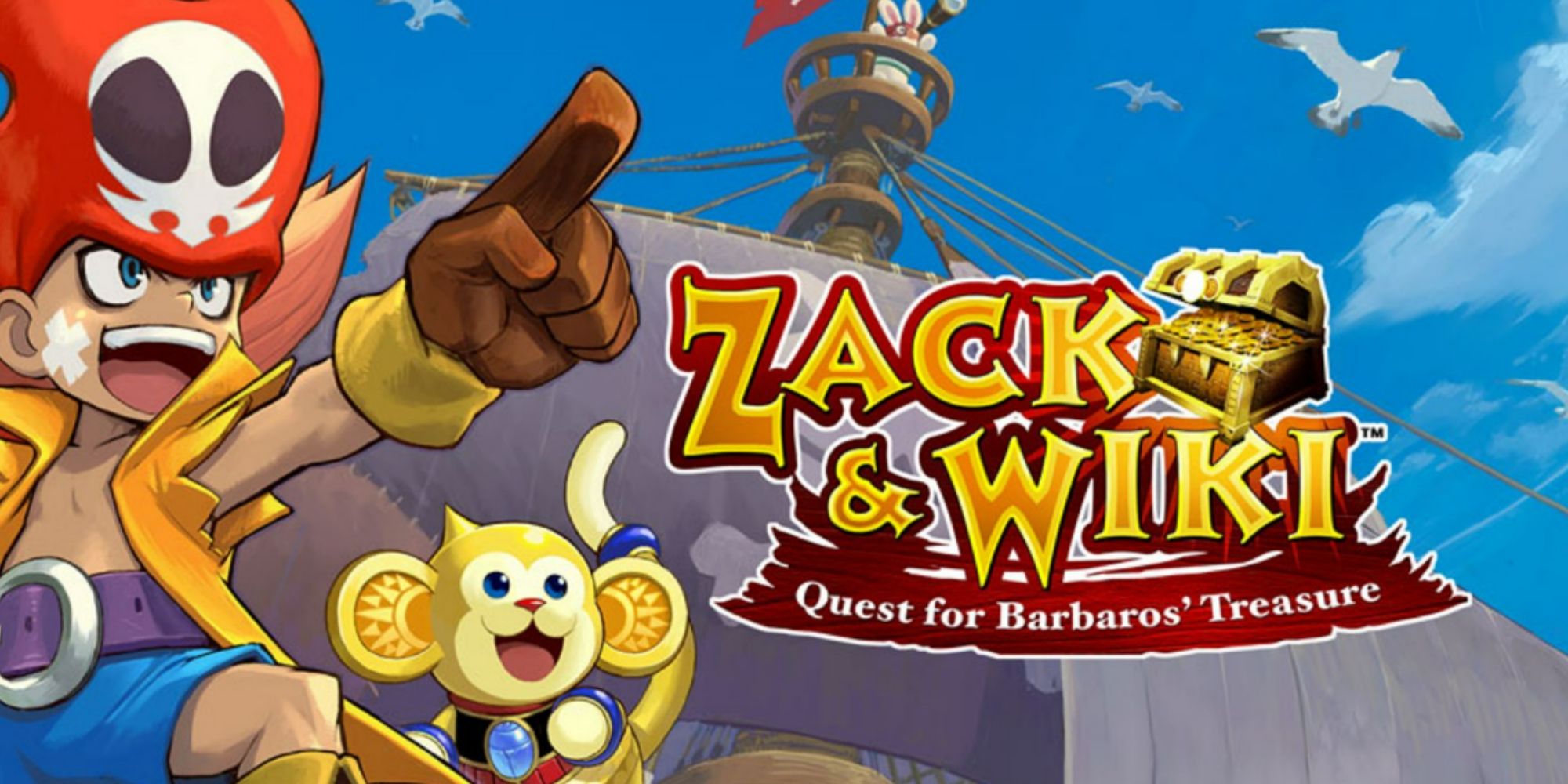 Zack & Wiki: Quest for Barbaros' Treasure is a 2007 Nintendo Wii exclusive game that instantly became beloved by those who happen to play it. The game plays out as a pretty traditional puzzle adventure game but one that draws you in with its charming, Saturday morning cartoon-like art style and quirky story and characters.

Players step in the shoes of Zack, a character who desires to be the best pirate in all of history. Along with his zany monkey pal Wiki, the two venture across sea and sand in order to solve puzzles, collect items, and investigate all manner of pirate events. Since the game was a Wii exclusive, the majority of the gameplay was handled with motion controls, for better or worse. 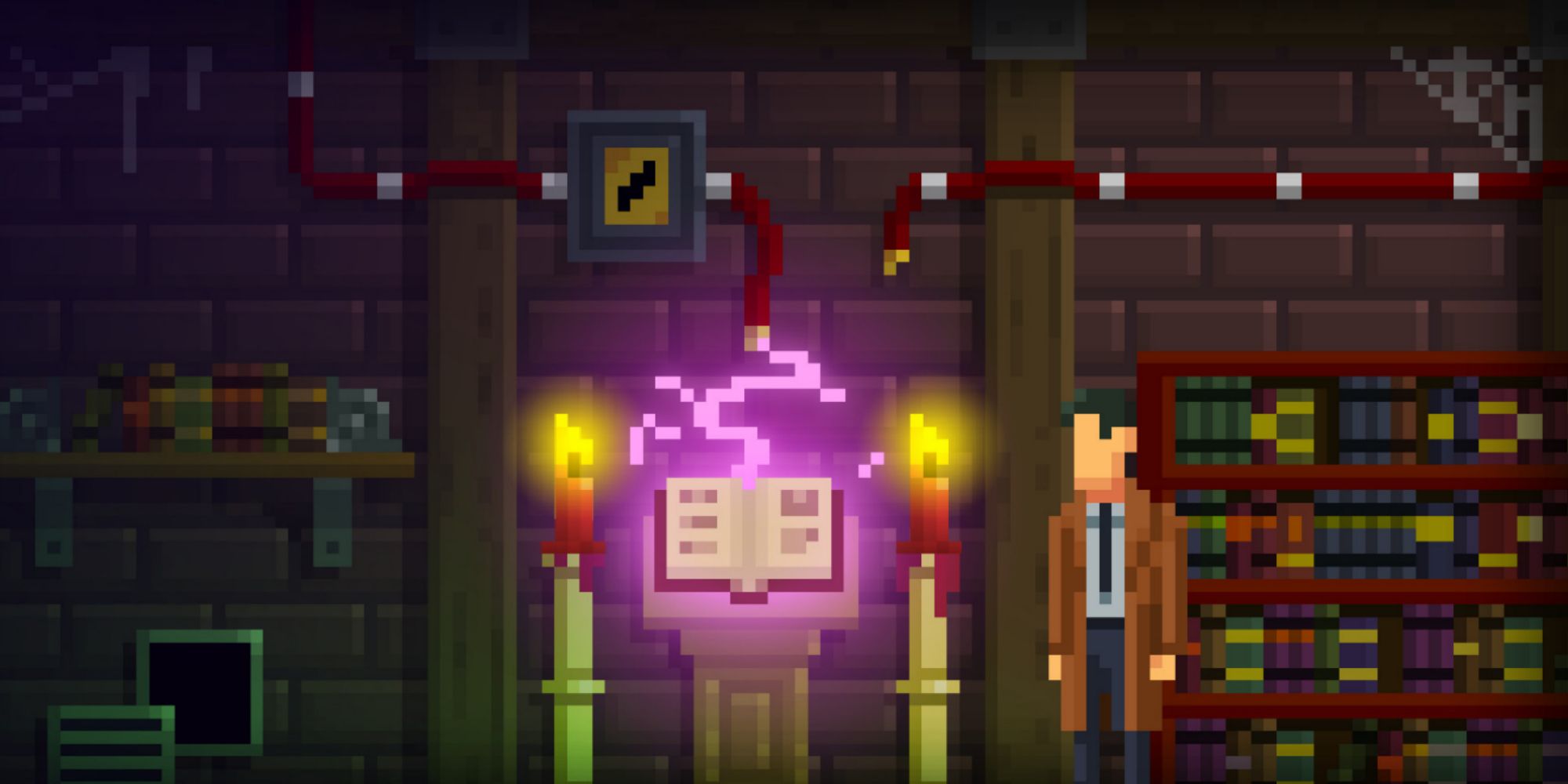 The final point-and-click adventure game on this list, The Darkside Detective is an excellent genre piece that is easy to digest since it's broken up into small cases that can be solved in almost any order you choose. Taking place in and around the very haunted location of Twin Lakes City, you will investigate all manner of dark and spooky cases.

In The Darkside Detective, you are a member of the Darkside Division, a group of people who are determined to rid their city of paranormal shenanigans. This pixel art point-and-click game thrives off of its sharp narrative and witty humor.