In the 1990s the quality of a game's visuals could be measured by its water. Today we take great water for granted, unless it's really special. But back in the 20th Century, when 3D visuals were relatively primitive, a fantastic water effect could stop you in your tracks. There was a time when a character moving through a body of water and leaving visible ripples in their wake, or the sun glinting off the surface, was spellbinding. You'd excitedly call people over to look at the TV and think this is it. This is the best a video game will ever look. We were wrong, of course. But there's one '90s game famed for its water that really was something special—and remains unbeaten in the field of simulated H2O, even today.

The Nintendo 64 wasn't short of impressive visual showcases, whether it was the snowspeeder battle in Shadows of the Empire, GoldenEye's gloriously theatrical motion captured death animations, or basically the whole of Super Mario 64. But for me, the game that really illustrated the 64-bit power of this console was Wave Race 64. Launching in 1996 to great acclaim, this Nintendo-developed, Shigeru Miyamoto-produced Jet Ski racing game was absolutely stunning to look at, and a delight to play too. Those bouncy, splashy, jet-powered watercraft were an absolute joy to toss around the game's generous selection of gorgeous liquid-based tracks. I couldn't believe how real the water looked when I first played it. 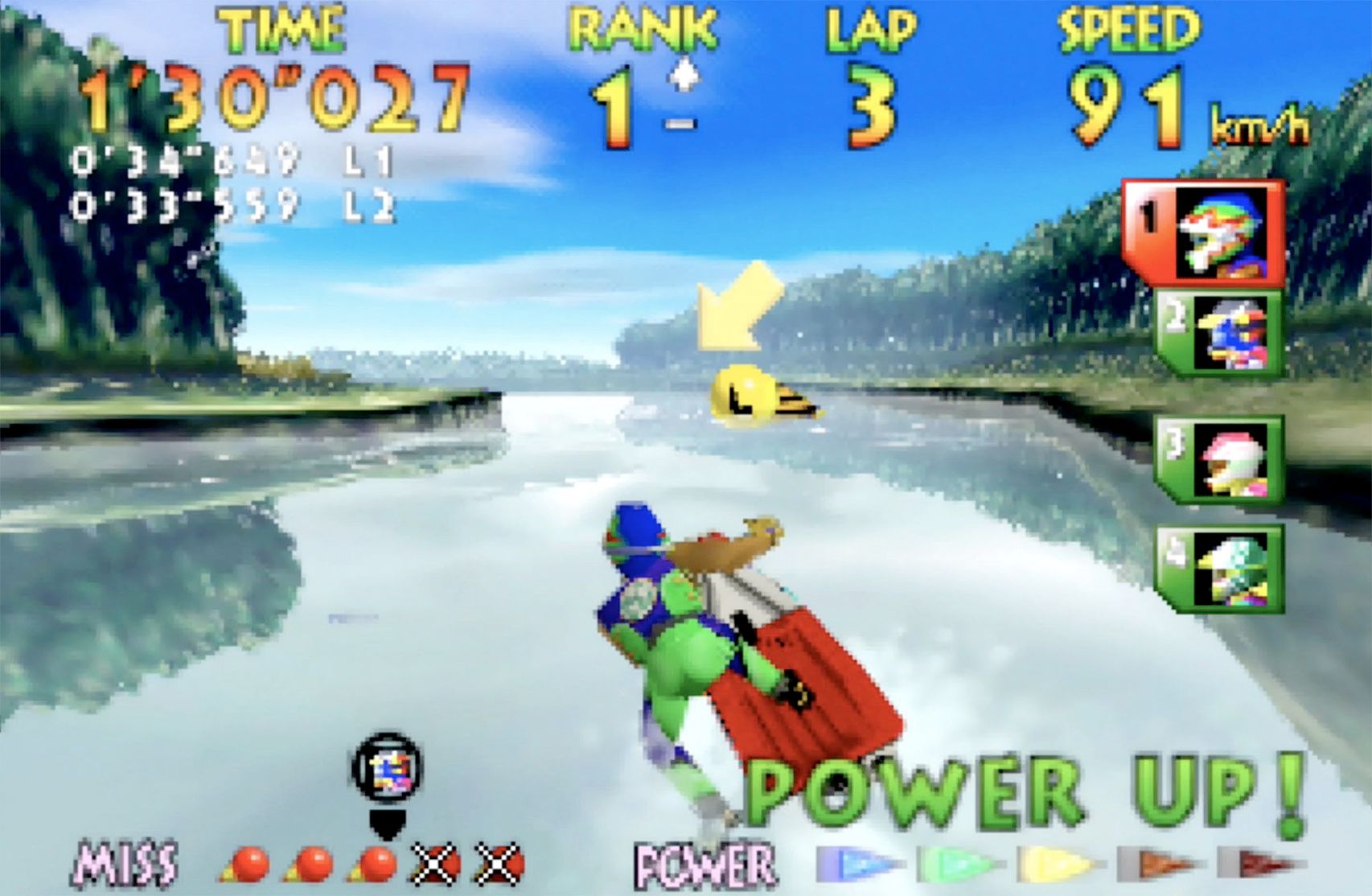 It doesn't look real now, and the technology is outdated. But here's the remarkable thing: it's still the best video game water. Better than the roiling oceans of Sea of Thieves, Subnautica's alien abyss, or Assassin's Creed Odyssey's sparkling Agean. All of those games are lightyears ahead in terms of technology, but Wave Race 64's water has character. It was a technical triumph in '96, but an artistic one too—and that's why it's weathered the decades so well. Tech fades, but great art is forever. Nintendo's artists didn't simply set out to simulate water when it made the game, instead using the power of the N64 to infuse it with life, style, and character. The riders aren't the stars of Wave Race: the water is.

In Dolphin Park and Sunny Beach you ride your colourful Kawasaki across great turquoise swells of dazzlingly crystal clear water, with dolphins leaping dramatically out of the surf and swimming alongside you. In Sunset Bay, the sun dipping steadily below the horizon casts a vivid orange glow across the waves, reflecting the hazy gradient of the early evening sky. The perfect mirror surface of Drake Lake, reflecting its mist-shrouded banks, is incredibly atmospheric. Marine Fortress and Port Blue opt for a more ominous feel, with a slate-grey overcast sky looming overhead and dangerous looking surges of rough, murky water to navigate. Every course in the game has its own distinctive vibe and aesthetic. 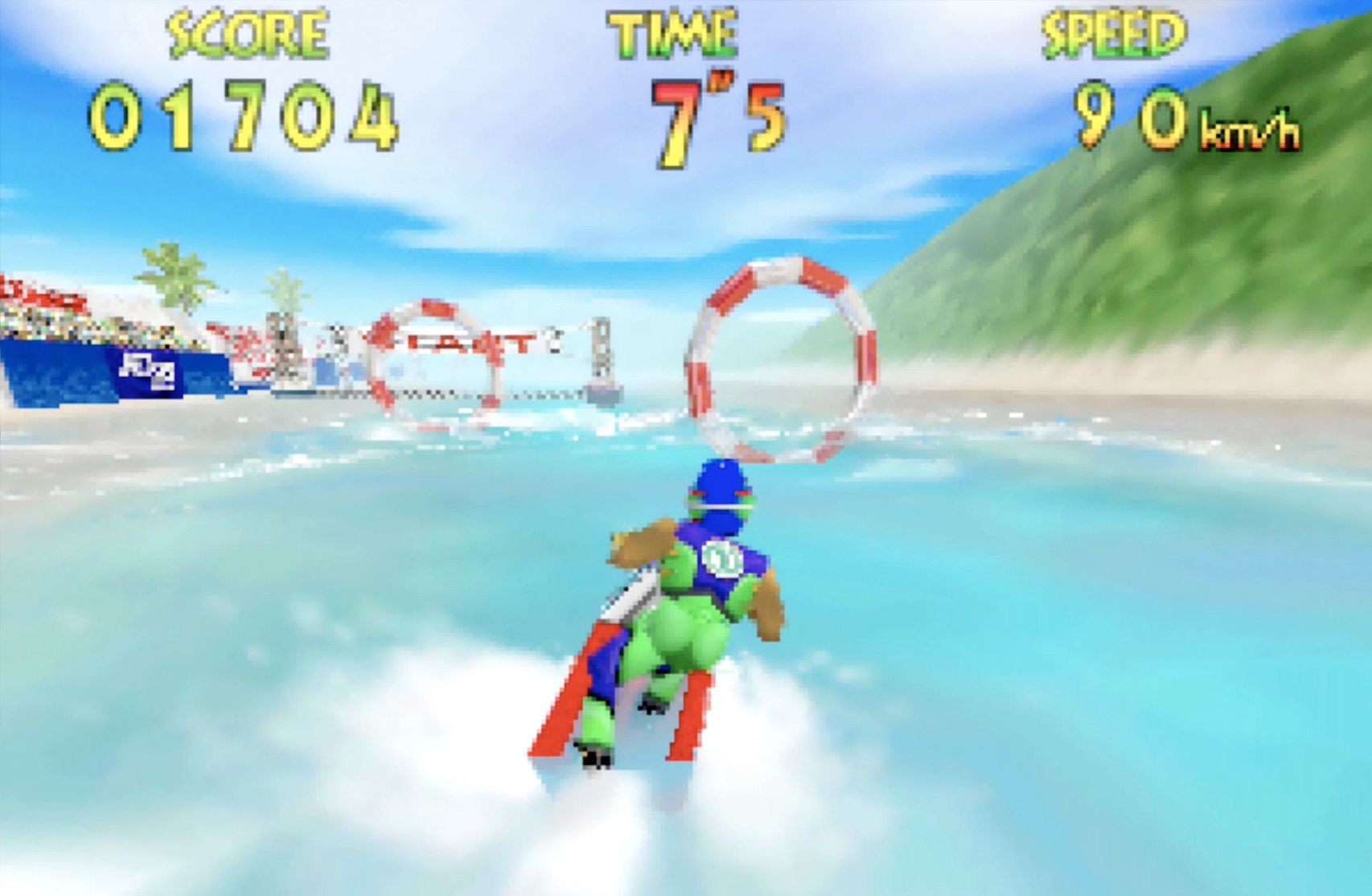 Twilight City, like Drake Lake, is another showcase for the game's show-stopping reflections. Taking place in a city at night, lit-up skyscrapers are mirrored in the water as you bomb through a series of canals. Glacier Coast sees you slaloming between chunks of ice in freezing arctic water. You can almost feel the cold through your TV. Then, as a reward for braving those treacherous waters, the game ends in the idyllic tropical paradise of Southern Island. It's one of the best, most varied collections of tracks in the history of racing games, and the difficulty curve as you move through them in a tournament is perfectly balanced. Wave Race 64 is a '90s classic and its water is still undefeated, even after all these years.