Tactics Ogre: Let Us Cling Together's plot is significantly more emotionally impactful than other games of its time. The story remains intact and equally as dramatic in the remaster, Tactics Ogre: Reborn. This is no more evident than in the moments detailed below.

The most interesting thing about this tactical RPG is how many of these moments can play out differently or be skipped depending on the choices you make and how some battles go. It makes these moments all the harder to bear, knowing that you might have been able to do something different to prevent them from ever happening. 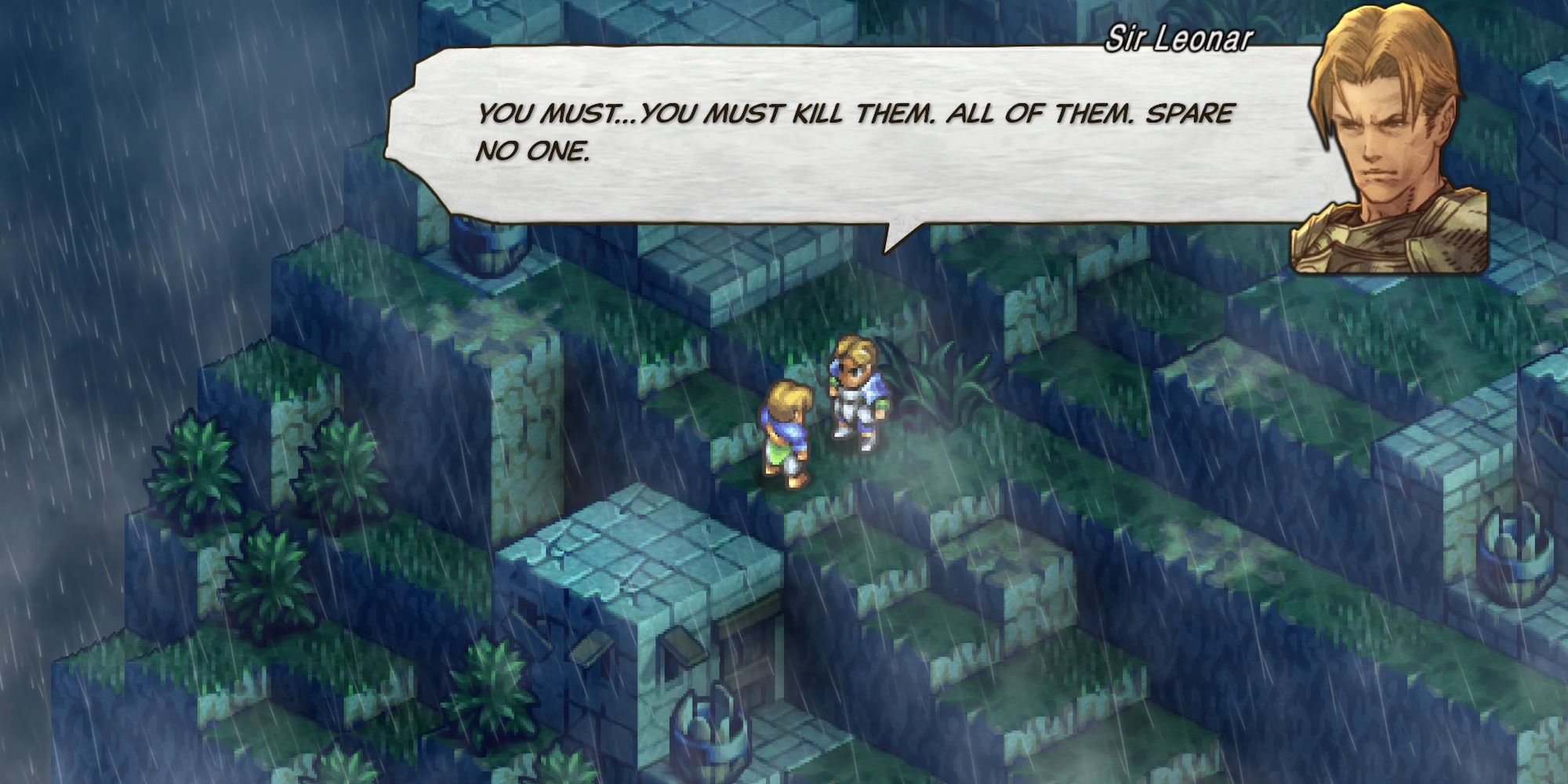 The first chapter ends with you being told to massacre innocent people and blame it on the Kingdom of Galgastan, in order to stoke the flames of war and get the people on your side. If you refuse, the protagonist considers this a grave betrayal by the Duke of Walister he had been following this whole time.

If you go through with it, then you have to live with that heinous act on your conscience for the rest of the game. Going the innocent route shows that even those fighting on the right side might be willing to go too far sometimes. This early event is darker than what goes on in most other RPGs.

7/8 All The People Who Die Because Of A Misunderstanding 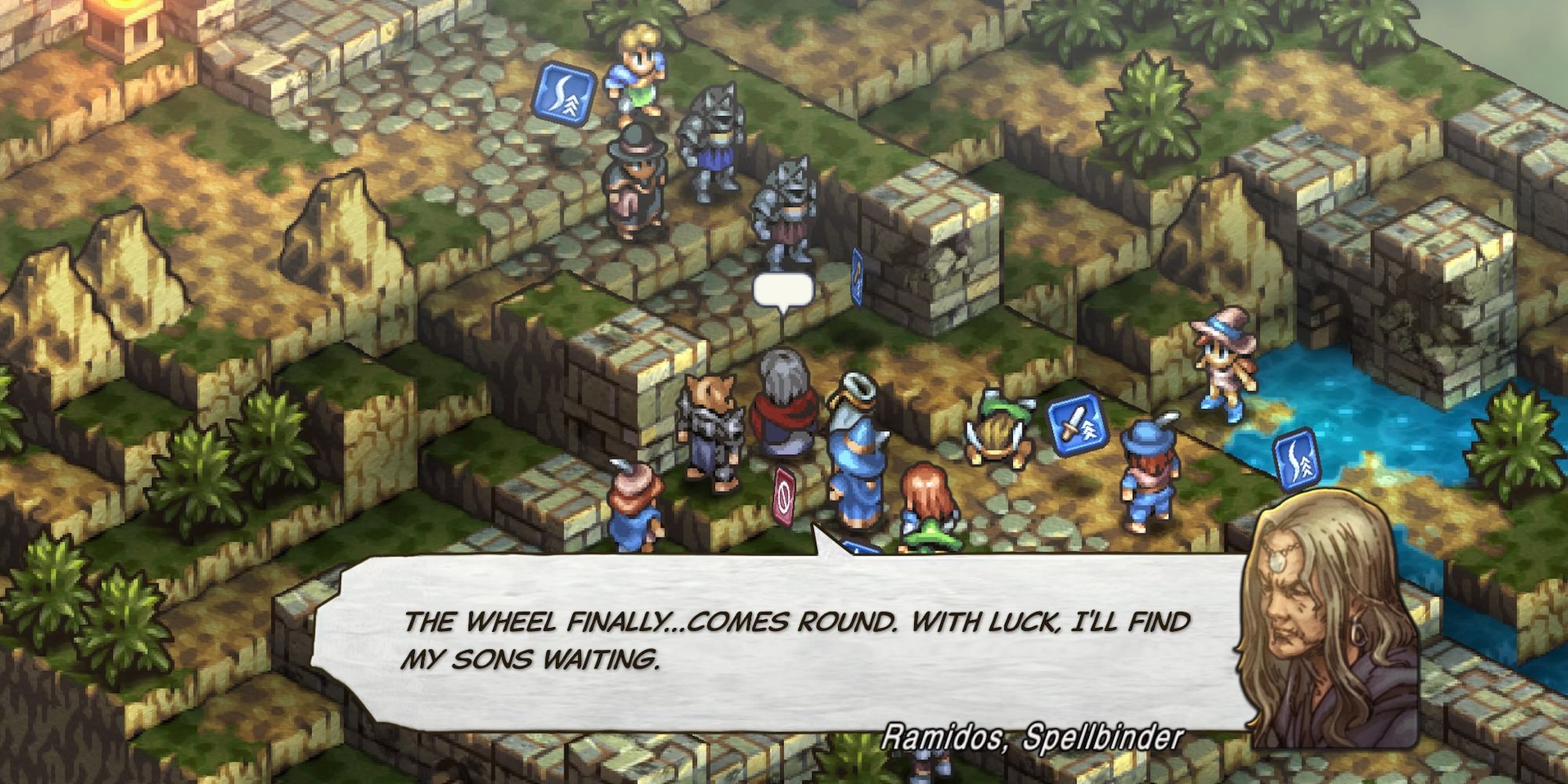 If you refuse to kill the innocent workers, then the Duke does the deed anyway and pins the blame on you. The next chapter sees you hunted down by many who are out for revenge.

Of course, you have no choice but to defend yourself from these attacks, meaning you are killing many due to a tragic misunderstanding. At least you can convince some of your innocence and recruit them to your side. The ones who die generally realize their error once it's too late. 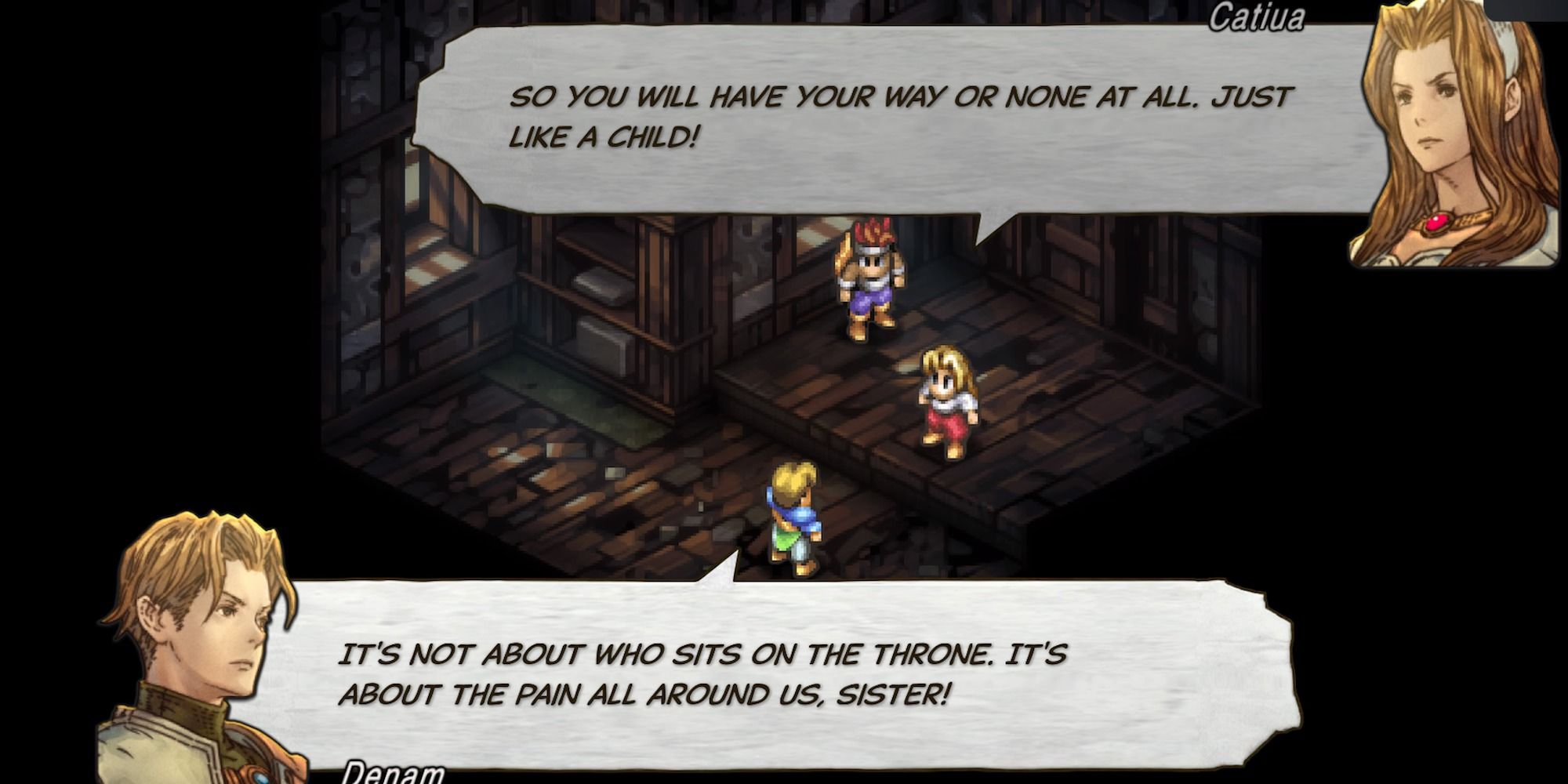 The Dark Knights reveal to Denam's sister, Catiua, that she is not related to Denam and is actually the rightful heir to the Valerian throne. By this point, she feels abandoned by Denam and opts to join the Dark Knights.

Little does she know, the Dark Knights are using her for their own personal agenda. Finding out the two aren't actually related by blood is the straw that breaks the camel's back, convincing her to leave the order Denam is leading. 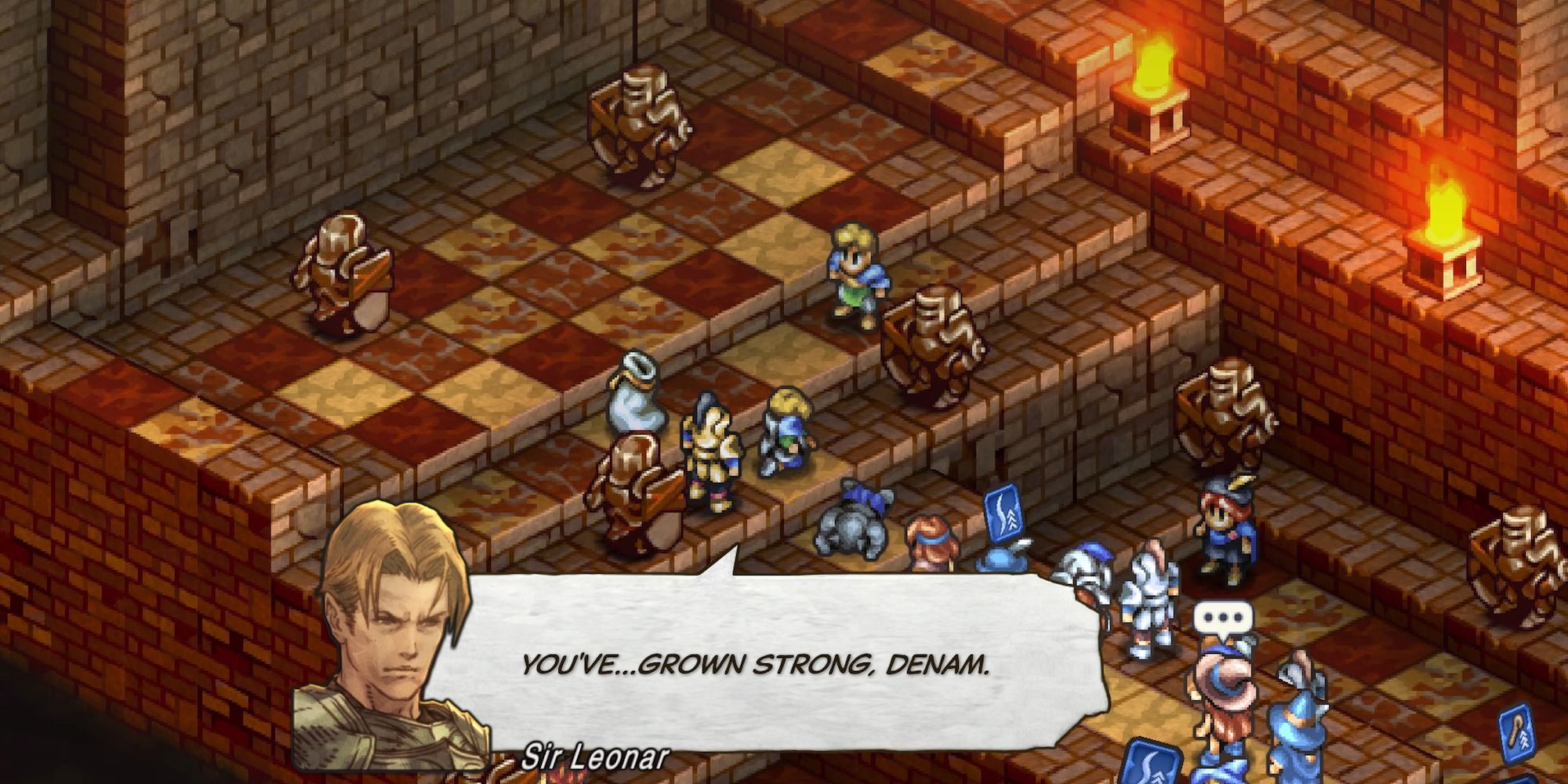 Leonar betrays you, and you end up fighting him a few times after he does the Duke's bidding. You can end up killing him, and if you do, his dying breaths can't help but draw tears from your eyes.

He admits that the path he went down was flawed, and he shows his admiration for you in your virtuous path for justice. Leonar really did these things for the good of the people, but he knows he went too far. As such, he hopes Denam can remain righteous. 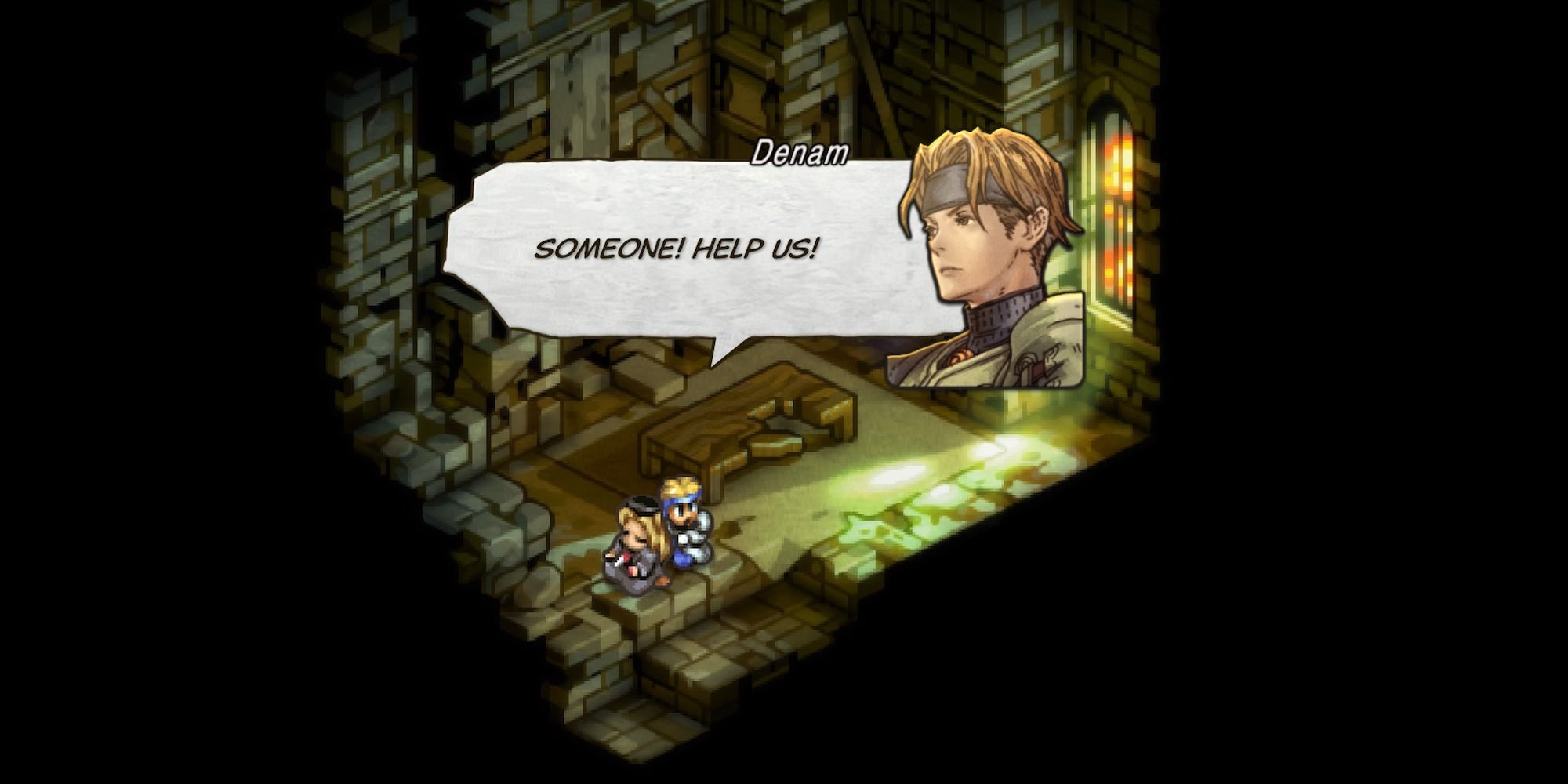 After finding Catiua again and saving her from the Dark Knights she can rejoin your party. However, if you make the wrong decisions she takes out a knife and kills herself right in front of Denam, dying in her adopted brother's arms. The moment comes off exactly as devastating as it sounds.

She cannot live with the betrayal, and Denam is unable to adequately comfort her. With nowhere else to turn, she ends her life. If she lives, she ends up becoming Queen, leading the Valerian Islands into a brighter future. 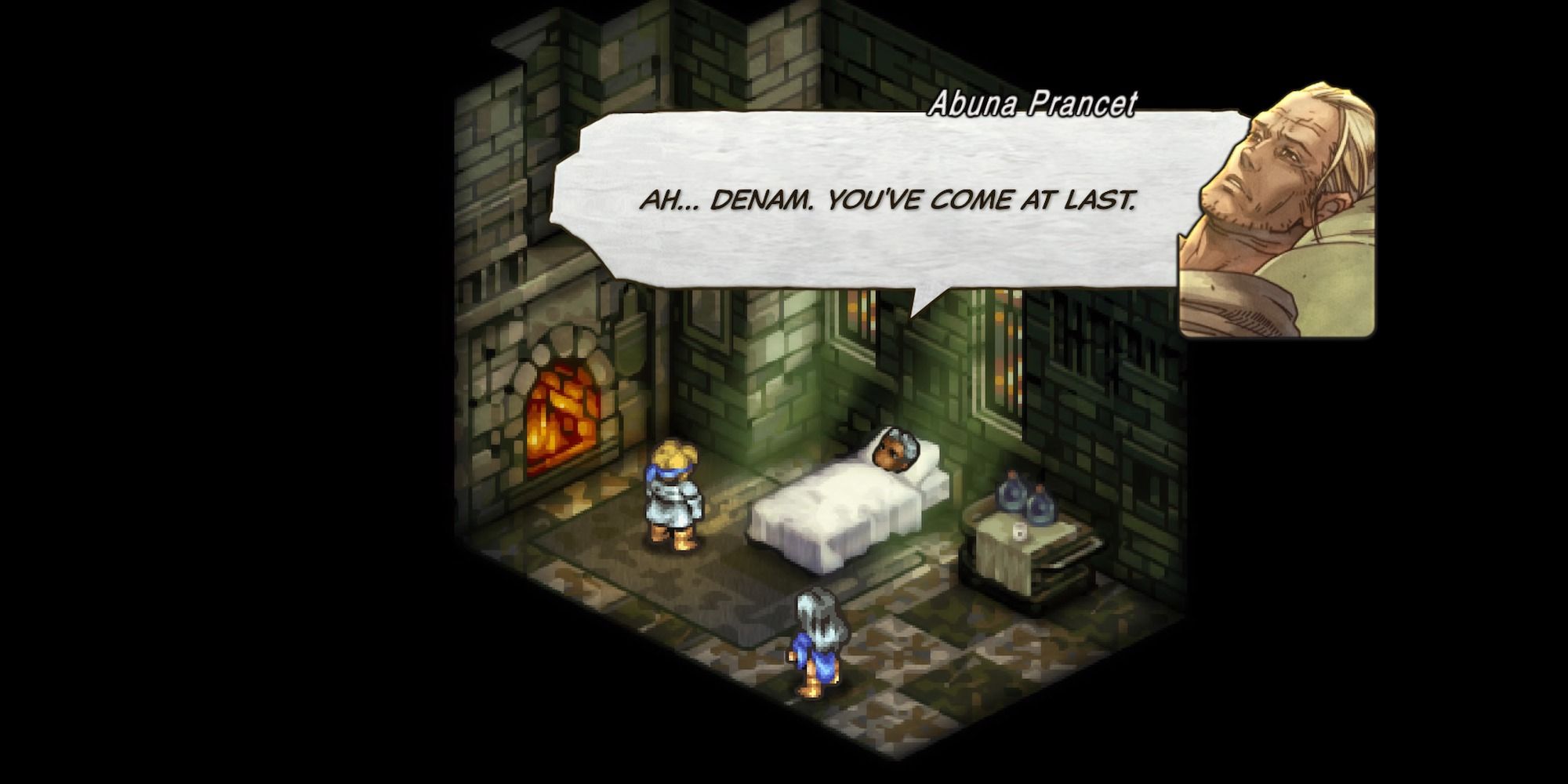 Denam thought his father was dead a year before the game's events. However, it turns out he lived through the massacre in Denam's town, and in the game's fourth chapter the two are reunited. The meeting is short-lived, sadly, and Abuna Prancett spends it dropping narrative bombshells on Denam.

Denam is not only not related to Catiua, but he is actually of Bakram descent. Though this shakes Denam a bit, he is also reaffirmed that his path to bringing peace should not be influenced by his lineage. The scene is also accompanied by a flashback detailing how Abuna adopted Catiua and how the whole family went to Golyat and became Walister. 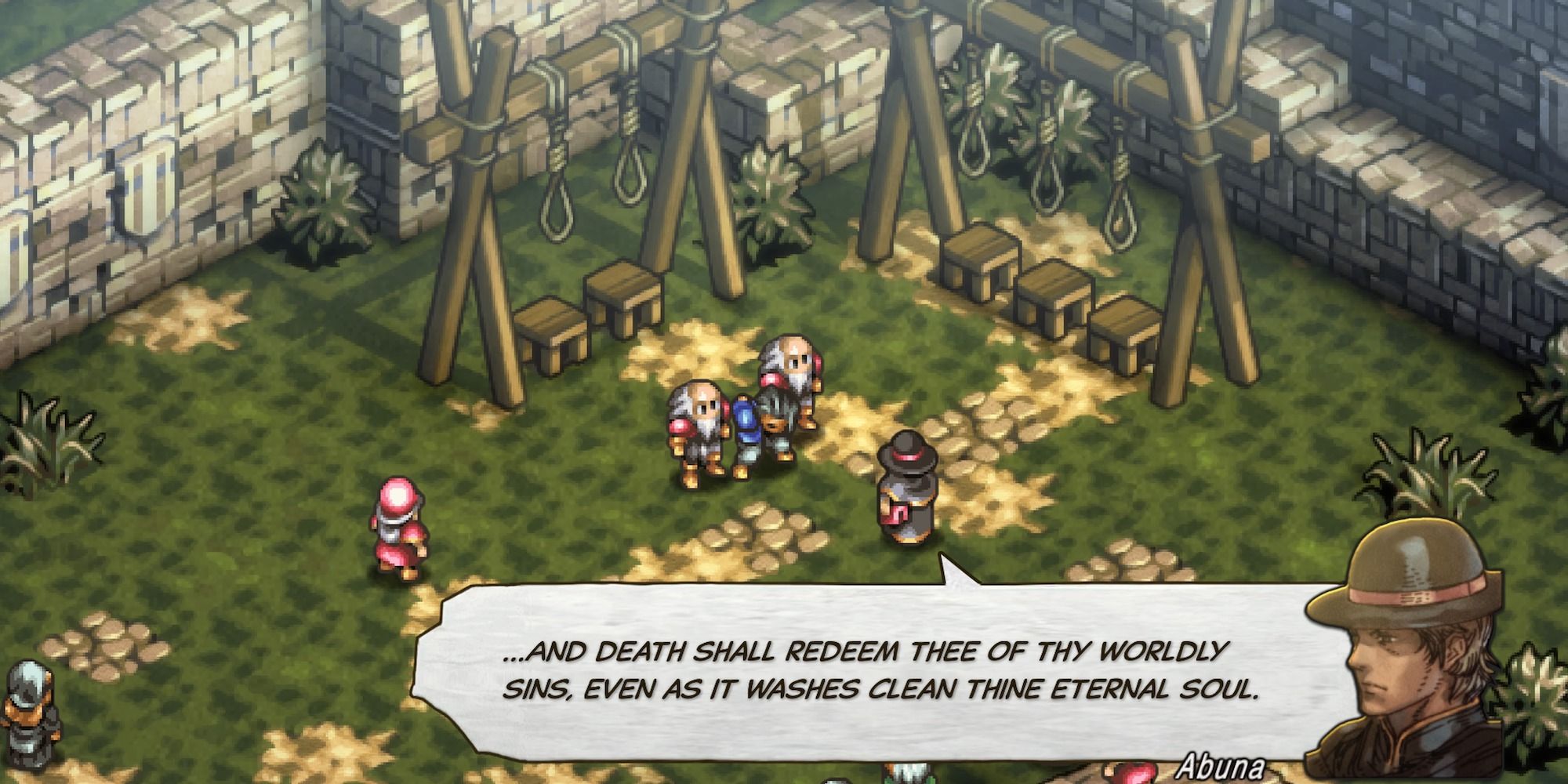 If you refuse the order to partake in the Balmamusa massacre, Vyce goes through with it and turns his back on you and Catiua. He goes deep into darkness and does whatever he can for power by the Duke's side. he eventually even betrays him for the Dark Knights. However, they see no further use for him, and hang him.

Even though he is evil, seeing Vyce beg for his life at the gallows can't help but makes us sad. Not only does he plead for mercy, but he spends his last words crying out Denam's name in vain. Even though he hated Denam and deserved no forgiveness for his betrayal, he just came off as so helpless and undignified in his final moments. 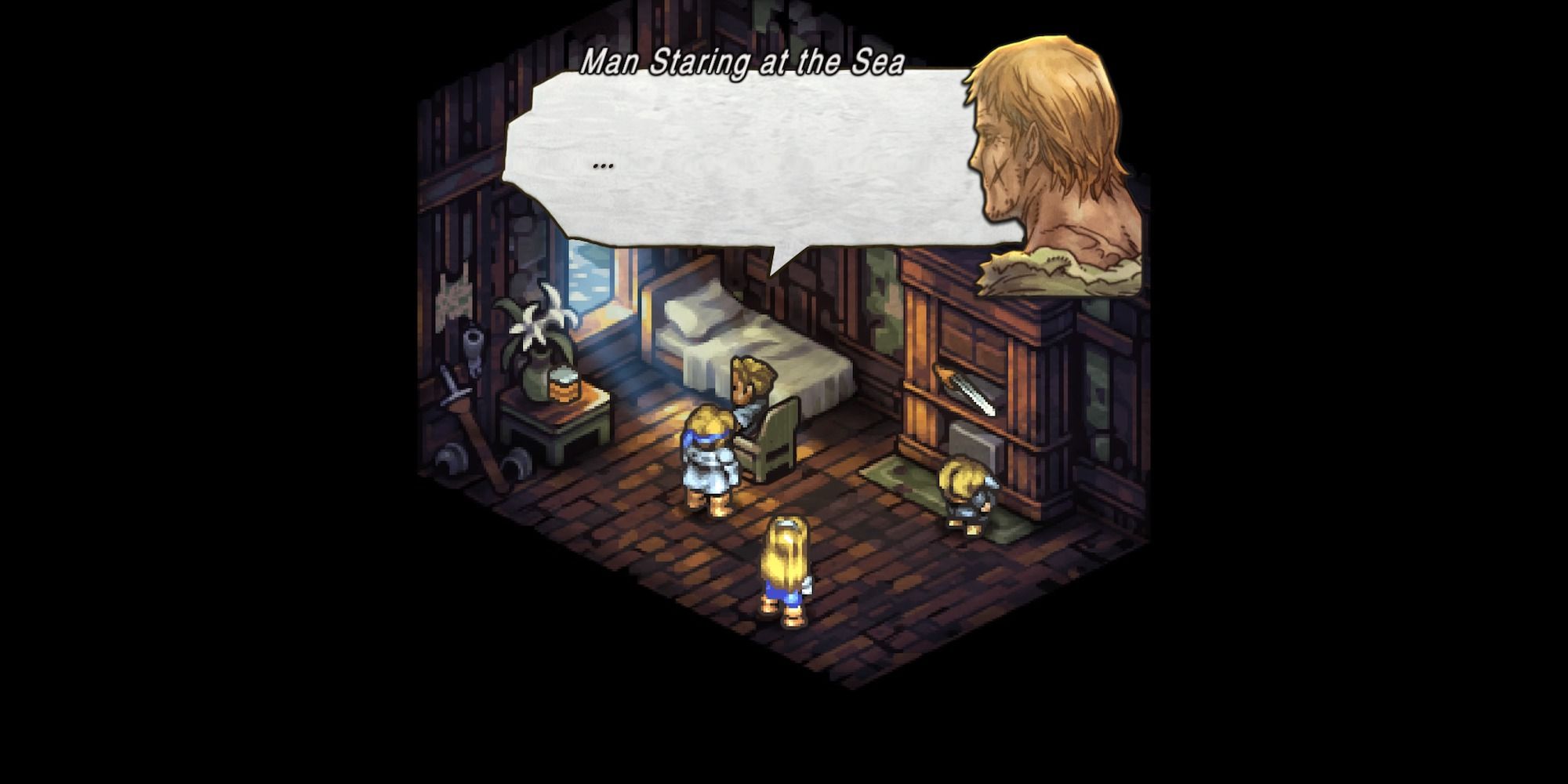 In a conversation with Denam, Holy Knight Lanselot reveals that his wife and child were killed years prior. Later on, he is captured and tortured by the dark knights. Denam eventually finds him after the ordeal.

Lanselot is unable to speak or communicate. Denam does not initially believe it is his friend, but then sees the music box that used to belong to his wife. When Denam opens it and the music starts playing, Lanselot finally reacts and falls out of his chair, but he is unable to form coherent words or sentences.