There’s a reason that “hunter” is half of Monster Hunter’s title: Admiring monsters from afar might be satisfying in its own way, but the whole point is getting in the faces of these giant beasts and battling against seemingly insurmountable odds. Once you’re done, you get to take your trophies and craft new weapons and armor to do it all over again. And for that, you need a base of operations. Monster Hunter World: Iceborne introduces an all-new region to explore, as well as a place to call home. Seliana may not have a whole lot of history (yet), but Capcom relied on its experience – and player feedback – when it came time to build this outpost on the edge of the known world.

Iceborne takes place after the events of the main campaign, when the expedition notices a mass migration from the New World to an unknown destination. Shortly afterward, it’s clear that the monsters are flocking to an undiscovered continent – and with that, we’re off. Unlike Astera, the hub world in Monster Hunter: World, this new base of operations is just getting started. Astera is an established outpost, having been built up over several generations. Seliana was largely constructed in advance and flown out via enormous balloons.

“You start off in the old headquarters of Astera, and as the story of Iceborne progresses you’re going to be able to transition to this part of Seliana, and you’ll see how this village grows and what develops in the storyline in relation to this new base,” says Kaname Fujioka, Iceborn’s executive director and art director. “Basically, it’s going to be a smaller base that they want to take to the Hinterlands.” 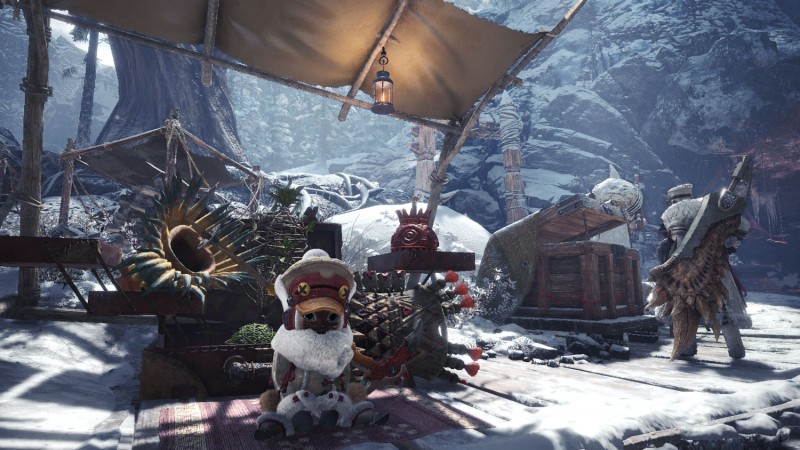 The expeditionary force built Seliana with the knowledge it acquired over decades of experience, which isn’t unlike how Capcom approached designing the new hub world. The team took player feedback into consideration when it came time to build Seliana, along with its own expertise in designing spaces. Director Daisuke Ichihara says that one of the big takeaways the team learned from that feedback was that Astera could be difficult to maneuver around and that certain NPC facilities were spread too far apart. “[W]e took great care when creating the new base, Seliana, in Iceborne to address some of those concerns,” Ichihara says.

“Especially the gathering hub,” Fujioka adds. “That was kind of a main focus point of some of the adjustments we made based on player feedback. For example, we really wanted to make the gathering hub a more fun gathering place, a more social-gathering environment for people, so they could communicate a little easier and have a little more fun there. And sort of use it as a social-networking space.”

We were able to explore Seliana a bit during our hands-on time with the game, and it’s striking how different the space feels from Astera. It’s smaller and has a bit of Nordic flair, and it generally has the vibe of being a place that’s on the edge of a frontier. There’s a lot of fun ambient detail, such as the various Palico helpers who carry parcels around the camp or the Poogie who wanders around in a sweater – a tiny icicle dangling from his snout. On the edge of town, you can watch wagons getting loaded before disappearing down the road. These are largely inconsequential details as far as gameplay goes, but they go a long way in selling the illusion of a bustling new community. NPCs like the chef and forge aren’t quite as far away from one another, which is at least partially due to Seliana’s smaller footprint. 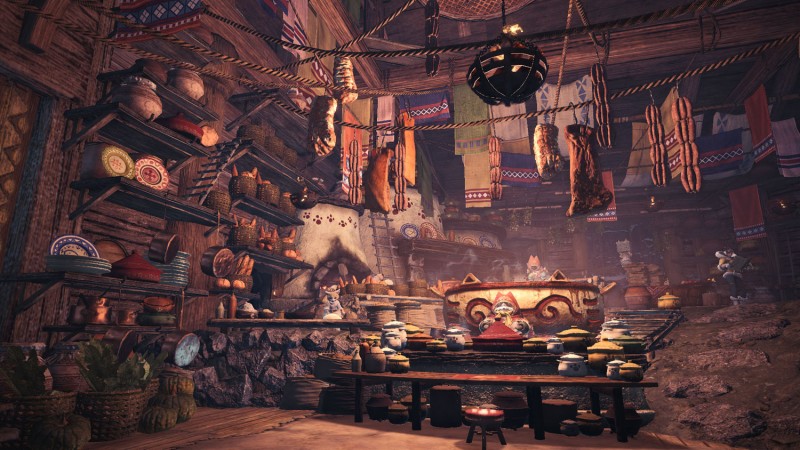 “There are reasons from both the visual design and the game design as to why it’s more compact,” Fujioka says. “If we wanted to make something that, in terms of game design, was super easy to access everything, then we’d just put all of our facilities in a straight line and call it a day – it would be an easy thing to do. But we want something that’s a lot of fun to walk around in, so you can walk around and find interesting little things here and there. That’s also part of our design philosophy. But we did take into consideration what players want, like all the room services that were in World that you had to access in your room can now be accessed in Seliana itself; you don’t have to go inside your room anymore.”

One of the things I like about the Monster Hunter team’s approach to game design is how they put a lot of thought into the underlying logic in their worlds, whether or not players wind up noticing those details. As fantastical as the monsters are, for example, the designers make efforts to come up with logical explanations as to why they’re able to use elemental attacks or have adapted to better survive in their home environments. That philosophy extends to Seliana as well.

“The basic concept of Seliana is that they’re building a base on undiscovered land – no one has been here before,” says environment artist Sachiko Fukuda. “With Astera, it was basically facing the open sea, and it was a place with a lot of rich nutrients and stuff like that. It was easy to grow stuff. With Seliana, it’s surrounded by mountains, and they’re trying to figure out they want a place where people help the hunters. They want a place where you can forge weapons, so they need that energy to power the whole place. One of the main reference points was Iceland. We did some research on cities in Iceland and how they operate, and a lot of the cities there get their energy from thermal energy.”

Iceborne’s Hinterlands are home to a variety of underground hot springs, which the residents of Seliana have been able to tap into. On a more personal level, hunters can take advantage of the springs’ healing powers to regenerate their health and stamina by taking a quick dip. That’s only one of the ways players can stay healthy and strong. Eating is another constant presence in the series, and Seliana introduces some fun new cuisine – and a new cook. 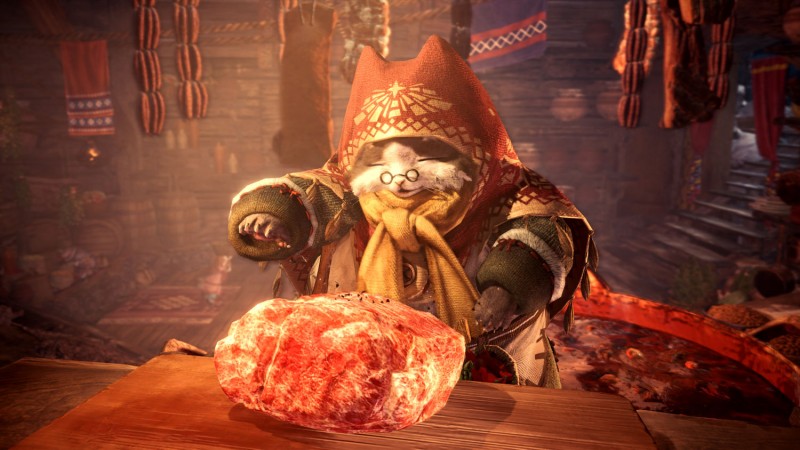 “The first concept we had was moving the Meowscular Chef to Seliana, and it was an outdoor canteen in the freezing cold; and everything was covered in snow,” Fukuda says. “We decided to move away from the first design and move the canteen indoors and make it a little warmer and more cozy. We got more advice from Fujioka that instead of just a grill of meat and everything we had in World, because it’s a cold place, to replace that with a big pot of stew, where you add things that will warm up your body because you’re in this freezing cold area. The design kept building on top of that, and as we started finalizing designs of the Grandmeowster Chef, we were going for something that resembles your grandma’s house.”

Putting the Meowscular Chef in this cozy new environment felt a little weird, so they designed a new character based on Russian nesting dolls: The Grammeowster Chef. Unlike the gung-ho attitude that Astera’s chef brings, this new Palico cook is a soothing presence, with more relaxing cooking animations than those of her protégé. Her food looks great, too. “We put a lot of thought and effort into making you be able to taste the food when you see it,” Fujioka says. “For example, the beef stew and the melted cheese. It’s something that you know there’s a lot of good taste behind it. We wanted something different from just a slab of meat in the Chef’s canteen.”

The Meowscular Chef is holding down the fort back in Astera, but not everybody stayed back. For instance, the smithy who works the forge has left that task to someone else and moved over to Seliana. If you miss anyone, don’t worry – you won’t be moving to this frontier on a permanent basis. “All the facilities that are in Astera are in Seliana, but in terms of story there will be reasons to go back to Astera,” Fujioka says. “There are going to be some changes in the new world in terms of stuff that’s happening, so you’ll have to go back and forth a couple of times to figure out what’s going on.” That said, I’m looking forward to spending more time in this new area, as well as the rest of Iceborne.

We’ll have more Monster Hunter World: Iceborne coverage throughout the month, so be sure to check out the hub page linked in the banner below.