Attack on Titan’s (Shingeki no Kyojin’s) 70th episode aired last night and left us all with a fair few questions. If it’s been a while since you watched earlier seasons you might be left wondering who Kaya is and what relevance she bares now, you might be asking questions about the Eldian Restorationists who purposely made their way to Paradis alongside Marley troops, Zeke’s overall plans may have you pondering in bed all night long, and the anticipation for Marley’s swift strike against Paradis? Well, I’m excited, I’ll tell you that much.

But the most exciting thing, for me personally, is the split between Gabi and Kaya. There is a lot here that they don’t yet understand each other – which will surely make for an explosive scene perhaps in the next episode – but for now, they’re simply young children, attempting to survive in a world they are only just beginning to understand. The main difference is their upbringing, and it continues to repeat the message that Eren’s father Grisha already learned before coming to Paradis: pushing your beliefs, your prejudices, and your convictions onto the next generation is a grave sin.

Who Is Kaya In Attack On Titan Episode 70?

Those with an excellent memory will know that Kaya is the girl that Sasha saved after a fairly small two-metre Titan invaded her village. After hearing that titans had made it inside the walls, Sasha and Conny both headed to their own villages to try to warn and save anyone that was there. While Conny’s village had already been devastated by the Beast Titan, the village that sprung up around Sasha’s forest home had been abandoned, save for one house, where a mother and daughter remained. Despite having no military equipment Sasha attempts to save the mother from being eaten alive, but after realising it was impossible, elects to save just the girl – Kaya, who has now returned. As a side note, I do love how this series makes a habit of not forgetting and discarding minor characters like Kaya. 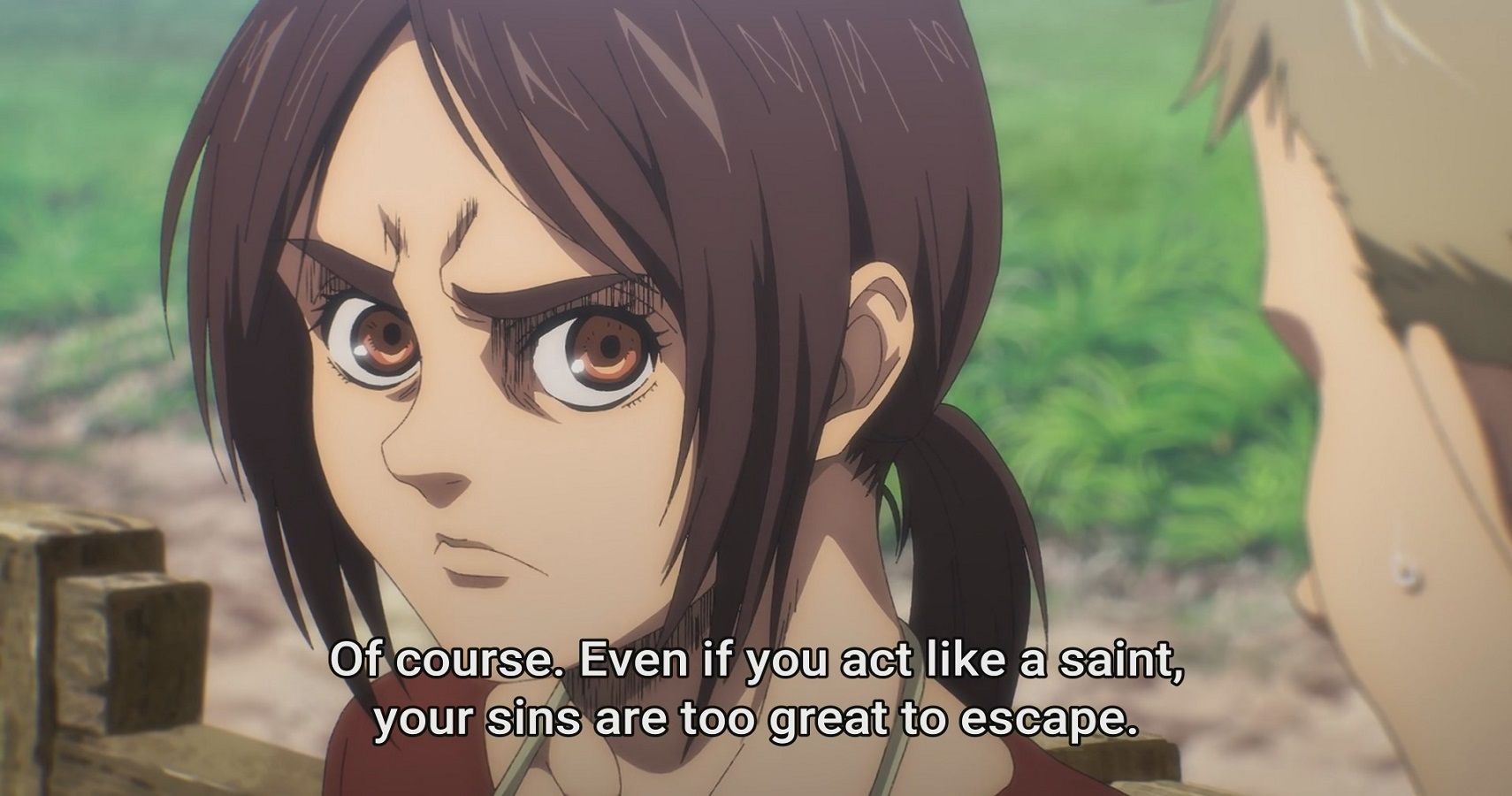 Kaya comes across Gabi and Falco while they wrestle in the woods following a prison break, and takes them back to the rest of the Brauss family that she now lives with. Falco and Gabi attempt to keep their mouths closed about their origins, but even though the Brauss family patriarch – Sasha’s father – has a South Marley accent (a Japanese “countryside” accent) it does not put Gabi at ease. Gabi is a Marley Warrior, a chosen recruit with expert training, and an unhealthy dose of brainwashing. Gabi has dedicated her whole life to set herself and her family apart from the other Eldians: while those that live on the island of Paradis are devils, responsible for countless atrocities and genocides in the past, the Eldian people that were left behind on the mainland have been punished, abused, and brainwashed. Gabi knows she isn’t a subhuman devil, but to escape the sins of her ancestors she endeavours to do all she can to right the wrongs of the past by waging war against the true devils, those who hid away on Paradis.

As a result, Gabi can’t bare to be touched by an Eldian on Paradis, and struggles to swallow food while eating with them at the same table. Every interaction Gabi has while surrounded by the people of Paradis is fuelled by an irrational hatred – after all, the subjugation the Eldian people experience on the mainland is because of the sins of their ancestors, and the king that fled to Paradis 100 years before. Gabi believes wholeheartedly that the only way to repent and redeem her bloodline, and the lives of her family, is to devote herself to hating and killing the Eldians of Paradis. Only this becomes more complicated once she is face-to-face with them.

Sins Of The Father

Kaya and Gabi’s final encounter of the episode takes place in the ruined village where Kaya grew up, and she shows Gabi and Falco exactly where it was that she watched her mother be eaten alive. At this point Kaya knows all about the pair’s Marleyan origins thanks to their loudmouths, and all Kaya wants is answers. After explaining to them the harrowing scene she witnessed and survived thanks to Sasha, she has only one question to ask; what did her mother do to deserve it?

Gabi is as resolute as she can be. The Eldians of Paradis are devils, they have committed atrocities, genocides, destroyed cultures, enslaved nations, oppressed and erased people from history – but Kaya’s mother didn’t have a hand in any of that. Kaya’s mother knew nothing of the past. Kaya’s mother did nothing but attempt to protect Kaya, and practically let herself be eaten in the process. Eventually, Falco relents and reveals it was a Marleyan attack on Paradis, and Kaya’s mother was simply an incidental casualty. There was no reason, no crime to fit the punishment, they were just in the way. 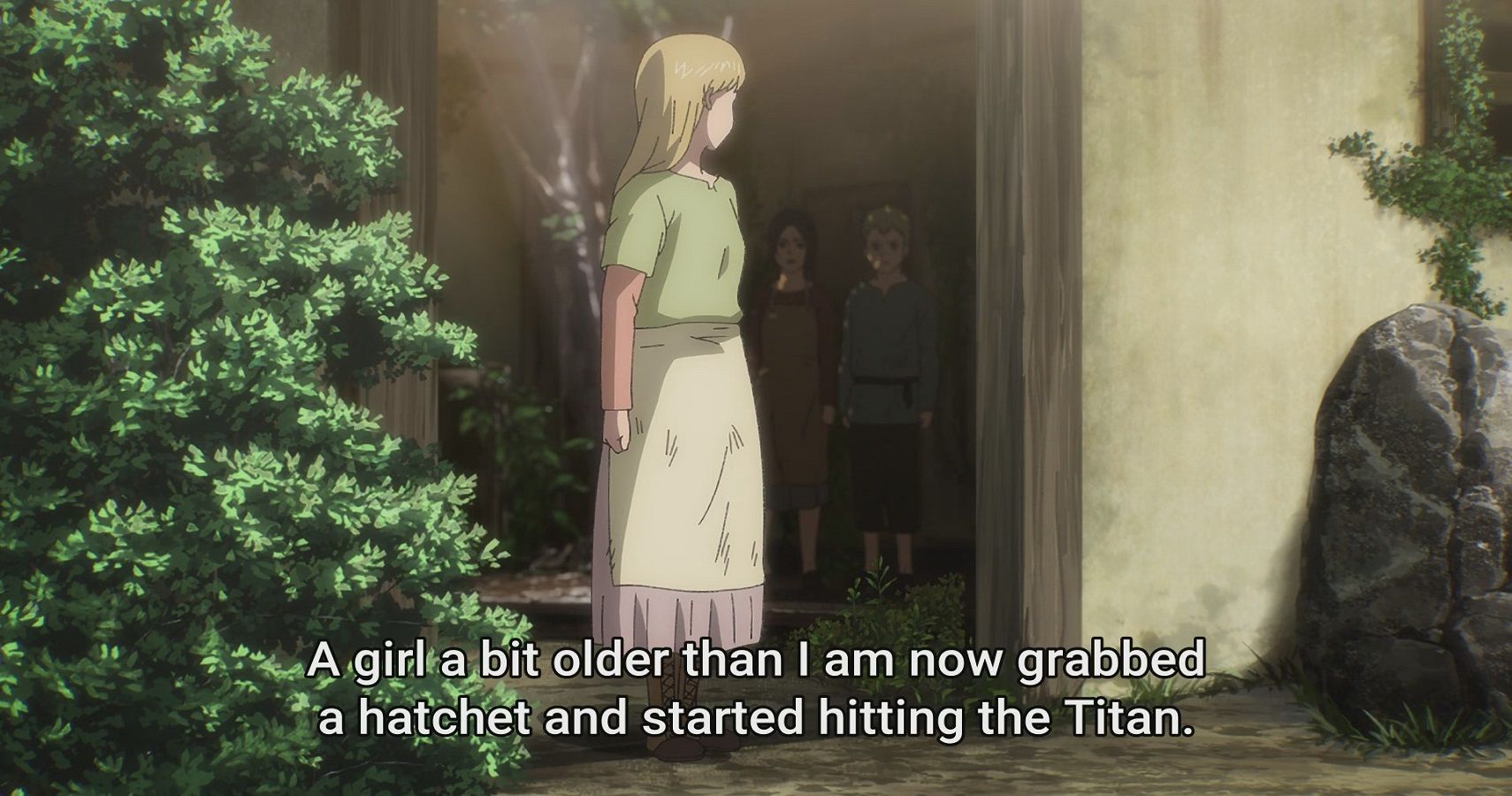 In this moment Gabi has to face the fact that everything she has dedicated herself to hasn’t been quite so clear cut. The firm belief she held that all of the Eldians are Paradis are deceptive, judgemental devils hasn’t held true. Likewise, Kaya was at least hoping for a good reason that something so tragic would happen to her mother, but there was nothing. Both girls are left in the mire of their owns minds as they scramble for a way to reconcile all they have seen and done.

Again, this mirrors what Grisha learnt earlier in the series. Grisha wished for the liberation of all Eldian people on the mainland, so they could live freely and not be trapped inside internment camps, and with the royal blood of his son, Zeke, it seemed like liberation could come to pass. But by attempting to brainwash Zeke, forcing his ideals on him, he rebelled, and handed in his parents to the Marleyan authorities. Grisha rebelled against his parents who wished for him to fall in line and obey authority, Zeke rebelled against Grisha who wanted to raise him as a warrior. Now in the story we have Gabi, the ultimate product of the Marleyan Warrior experiment, someone devoted to the war, and Eren, who has inherited his father’s memories, and wishes for freedom for himself, and the other people of Paradis, even if that means thousands more innocents must die in the process.

The question is, will peace be found when the memories and prejudices of our ancestors are put to rest and not passed on to the next generation, or are some crimes too impossible to forget? Can Kaya ever forgive the Marleyan people for letting her mother and others become an incidental casualty? And a more pressing question is how will Kaya and the rest of the Brauss family react when they discover that Gabi killed Sasha, their precious family member?

Next: This Attack On Titan Fan-Made Game Looks Amazing