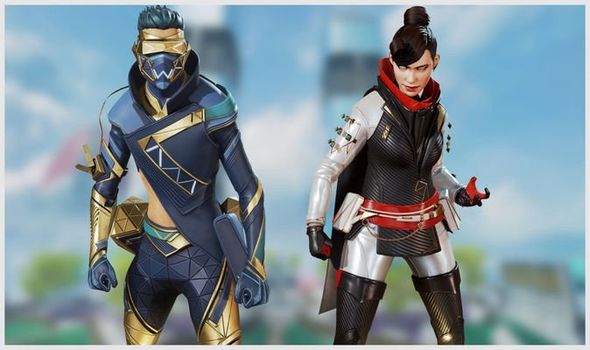 Apex Legends Season 7 is chock full of new content for gamers to explore on PS4, Xbox One and PC.

And when the new patch is released, it will even herald the arrival of the popular free-to-play Battle Royale experience on Steam.

The good news is we know when everything is being released, and we even know what big behind-the-scenes changes are coming with it.

As revealed in the latest patch notes released by Respawn Entertainment, most Legends characters will see tweaks during Season 7.

WHAT TIME DOES APEX LEGENDS UPDATE?

Developers Respawn Entertainment has revealed that the next Apex Legends update will be released on Wednesday, November 4, 2020, in the United States.

Meanwhile, the Apex Legends update time has been scheduled for 8pm PDT on Wednesday, which means a later launch in other regions.

It’s unclear at this point why Respawn has chosen such a late start time for its latest content patch.

It could be that the development team are trying to avoid server strain, but it will be worth keeping an eye on the game’s official social media feeds just in case last-minute changes are made to the schedule.

As always, there’s a long list of patch notes to check out, including details covering the new vehicle, map and Horizon character.

But below, we have chosen to focus on the other changes being made to the game, including what’s happening to the existing Legends.

For 2 weeks, Olympus will be the only map you can play on. After that week we go into a normal rotation between Olympus and World’s Edge. We will be vaulting Kings Canyon for the time being.

Not much to say here. Rolling Thunder will continue to function primarily as a zoning ability, but with a somewhat shorter fuse, it will encourage enemies to leave the zone slightly faster.

Fighting in Caustic Gas is one of the most frustrating things in Apex Legends, and yet we need the gas to represent a meaningful threat or else enemies will just ignore it. With this change we’re attacking what we think is the greatest contributor to this frustration: the fact that your vision is blurred while you’re in gas. This made it extremely hard to fight back. To make up for lost power, we’re upping the damage from the gas a bit.

Our bamboozler-in-chief is a hard Legend to keep relevant. Every time we make a change to decoys, there is a clear uptick in usage and power as Mirage mains learn to use their new tools, and then as the rest of the world catches on and starts being able to tell the real Mirage from his equally handsome holographs, that uptick disappears. This time around we want to try and make it a little bit harder to clear out decoys. We’re giving them health, but to make this very clear up front: they will not work as a shield. While they take damage from bullets, the bullet also passes through them and hits whatever’s behind them. This is what we call the hallway test: you should not be able to win an engagement against an enemy in a straight coverless hallway by snapcasting a decoy and having said decoy eat an entire Wingman shot. Decoys will also play unique hit effects and briefly flicker out of existence when taking damage to help you differentiate between them and the real Mirage.

Octane is a Legend for players who like to go fast, run face first into the enemy, and get knocked down a lot. We think that’s absolutely fine; the fact that his Trios winrate isn’t great doesn’t really bother us because both his encounter win rate (think of this as his ability to score knockdowns) and his pick rate are very healthy. That said, we figured we could give him a little extra out of combat help. His passive’s heal rate was very slow, requiring up to 200s to fully heal your health bar.

Wattson is the anti-Octane: not super powerful individually, not picked very often at all below Plat, but an absolute must have for competitive squads. We’re also happy with that niche, but figured it would be safe to give her a little extra power in her best case: people running into her fences. We’re aiming for this to bring up her power and attractiveness at lower levels of play especially, since we don’t see a lot of players run into Wattson fences in high skill matches.

We’re taking another swing at making Loba the ultimate Legend to bring to solve all of your team’s loot needs. We have heard your feedback that you want improvements to her tactical as well, and while that’s certainly not off the table, our data suggest that her encounter win rate (how many knockdowns she gets compared to how many times she’s knocked down, across all matches) is quite healthy. It’s her Trios winrate that’s worryingly low. Make no mistake: this is a major swing at making Black Market powerful.

In patch 6.1, we made a small change to how long it takes Sheila to tighten her bullet spread. This didn’t meaningfully increase her winrate. The other half of that change is in this patch. We do not want to change Rampart away from being a Legend that requires setup, but we do want to make it faster to set up. Amped Wall should remain a mostly out of combat setup ability rather than a reactive ability and Sheila should remain an area denial tool rather than a murder machine, but like all things, these balance points exist on a spectrum, and with this patch we’re moving them slightly closer to reactive/murder machine territory.

Pathfinder continues to be an overachiever in terms of win rate. The good news is that his grapple change in 6.1 didn’t move his win rate by much (it went up 1% in total). We’re doing two things this patch: we’re adjusting his hitboxes and we’re putting in tuning for Grappling Hook that will firmly move it into buff territory. More context below!

Hitbox: Pathfinder has a tall but extremely skinny hitbox. A lot of his model isn’t actually shootable and particularly his arms and legs do not represent a lot of shootable area either. Here is a before and after comparison of Pathfinder’s hitboxes:

As you can see, there is still a lot of negative space around his arms and legs. We’re hoping that by making it a little easier to hit Pathfinder, we can bring his win rate under control to the point where we can put meaningful power into his kit.

Because the question is sure to come up: we are not yet removing Low Profile from Pathfinder with this change. Even with these increased hitboxes, Pathfinder will still be considerably harder to hit than most other characters in the game. If this change does make a meaningful difference in terms of his win rate we will drop Low Profile; but we really didn’t want to take it off him this patch only to have to put it back next patch when it turns out his winrate spiked.

Grappling Hook: We’re making a number of changes to Grappling Hook. In 6.1 we shipped a very conservative version of this change; now that we know this didn’t meaningfully affect his winrate or, anecdotally, how frustrating it is to fight him, we’re shipping the much more aggressive version of the changelist. We also want to make it clear that players should not be punished for chaining grappling hook perfectly into other movement mechanics.

R99 Out of Supply Drop: The R99 will be returning to the normal loot pool this season, with the same stats it had before it went into the supply drop at the start of season 6.

Prowler Into Supply Drop: The prowler is replacing the R99 in the supply drop.  Despite the Selectfire hop-up being removed from the loot pool this season, the Prowler will still have the ability to change between 5 round bursts and full-auto.

While we are happy to see the Hemlok get more attention with the recent buffs, we think it is a little too strong in season 6. The effective range of the burst mode felt a bit too far, and the spike damage capabilities of a full headshot burst were too strong in high level play.

The LSTAR had some limitations that caused it to feel worse than we’d like. The recoil pattern snaked back and forth, which was difficult to control reliably. Additionally, firing for short bursts and then releasing the trigger repeatedly, or “feathering the trigger”, felt somewhat clunky due to the long venting time after firing and the slow heat reduction. So, we are reducing those pain points to improve the viability and feel of feathering the trigger, and adjusting the recoil pattern to reward players who can effectively control the LSTAR’s heat.

The Sentinel was still a bit weak. We think a good place to improve it is the energize ability. It seems a bit too situational, only being a benefit if the opponent has >70 shields. So, we are changing the energize from a “disruptor” anti-shield effect to an “amp” damage boost effect.

The Triple Take is still performing a bit too well after the most recent nerf, so we are reducing the fire rate back to what it was before the 6.0 patch. We will be watching in the future to see how just the integrated choke, sniper ammo increase, and new popularity affect the weapon’s performance.

We increased the requirements to evolve Evo Armor in order to reduce the amount of players with Red Evo Armor during the end game.