Bella Ramsey has seemingly confirmed that HBO's The Last of Us is planning to release in 2022.

Although we've had plenty of details on HBO's The Last of Us over the past few months, including the reveal of most of the main cast and some set photos showing off the characters in action, we still don't have a concrete release window or indication of when it's planned to start airing. That makes sense considering we've only had one official photo and no trailer, but we might have just been given the first hint.

As reported by GamesRadar+, Bella Ramsey, who is playing Ellie in the HBO show, posted a link on her Instagram story to the IMDB page for The Last of Us, which claims that it will "premiere in 2022 on HBO Max". 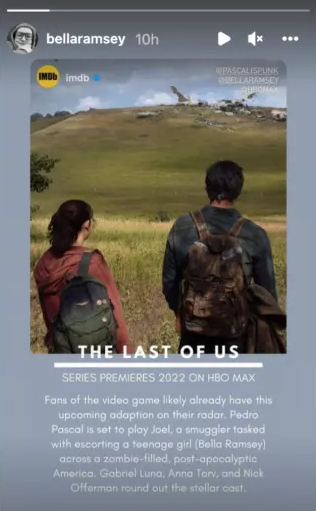 Although this shouldn't be taken as official until HBO reveals the release date, it's safe to assume that 2022 is when the series will debut if one of its main stars believes that to be the case.

This is alongside the fact that Kantemir Balagov, one of the directors of the show, has "The Last of Us (2022)" listed in their Instagram bio, which was reported back in 2021. Again, this shouldn't be taken as fact until HBO announces some sort of date or shows off a bit more of the show, but it's interesting that so many people involved with the show seem to think that it's debuting this year.