Call of Duty Black Ops 4 fans are counting down to the release of Blackout’s new Alcatraz map on Xbox One and PC.

The Alcatraz Blackout map made its PS4 debut as a free update on April 2.

Unfortunately, however, due to Sony’s exclusivity deal with Activision, Xbox One and PC owners were forced to wait.

Thankfully, however, the wait is almost over, because Alcatraz has an April 9 release date on Xbox One and PC. The launch date was confirmed by an Activision spokesperson to Express Online.

Activision is yet to announce an official release time, but if it’s anything like last week’s update, expect Alcatraz to launch at 5pm UK time.

The new map is expected to launch alongside a small update to fix some of the early Alcatraz issues.

According to last week’s PS4 patch notes, the Alcatraz update should fix issues with the player count being displayed incorrectly, as well as problems with players getting stuck and redeploy messages.

Alcatraz is a standalone map with its own playlist, and a smaller, more compact play area.

The new map is said to require new tactics, as players battle within a fog-filled island.

“The new Blackout Alcatraz map is set in a fog-filled island boasting a variety of environments that all lead up to the big cellhouse atop the hill,” reads the Activision post.

“Requiring new strategies and tactics, players will drop in, gear up and fight through both close-quarters combat and long-range exterior firefights as they battle to be the last squad standing. 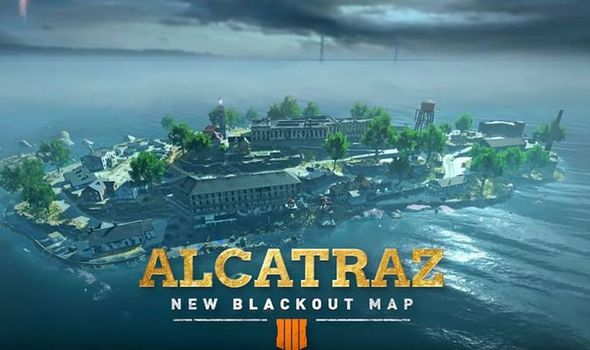 “Alcatraz is launching in addition to the original Blackout map, so players will have two distinct maps to choose from when jumping into the mode.”

The map contains a smattering of zombies, as well as one or two undead surprises.

And according to Black Ops developer Treyarch, more new playlists and features will be added over the coming weeks.

This includes the Infected playlist and brand new Arsenal Sandstorm map, which is a free download.

A Treyarch tweet reads: “Yes! Barebones goes live for all platforms tomorrow, then we’ll be dropping Infected up next, followed by the free Arsenal Sandstorm map for everyone, and of course, a new batch of MP maps when our next Operation kicks off later this month. Can’t wait!”