There’s also Moze, the gunner character and her mech, Iron Bear that she can summon.

She has three different skill trees which afford her with different turrets on the mech, some help with close-quarters combat, others focus on helping you with ammo.

Again, the variety is much appreciated. I still think the as-of-yet unreleased character FLAK would be more my scene, but Moze certainly will provide a niche of players with a character they’re going to love.

My favourite part of Moze’s design is the cool Mech U.I when you activate her skill, which transforms the game into a different genre quickly.

When I started playing, I immediately noticed the QOL benefits of mantling and sliding. Platforming and moving around in Borderlands 2 always felt like a significant compromise – unintuitive in a sense.

3 totally strips away the system and rebuilds it so you feel super cool as you’re dashing and hopping around arenas turning enemies into pulp.

I played through the same demo seen at the preview event earlier in the month – I took on Mouthpiece in his nondescript lair. It was cool to see environmental traps in the game which mix up the danger. 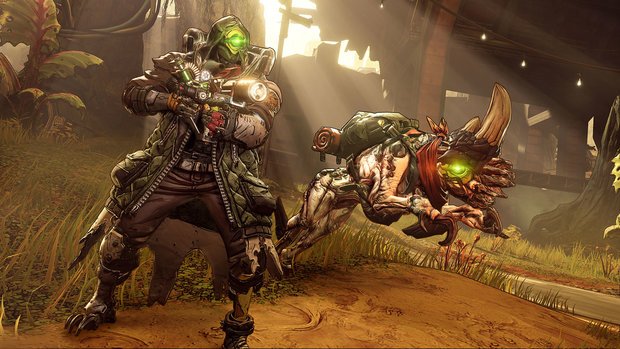 Overall, the graphics are better, but nothing wildly different – the gunplay feels great (except for sub machine guns and assault rifles, which still feel fairly muted and lack the crunch of a shotgun.)

Outside of that it was a fun demo – I enjoyed the tactics of the boss battle that weren’t just ‘overwhelm him with bullets’ and I no doubt will be there on September 13 pushing through the game with my friends.

There’s really not a lot to complain about with Borderlands 3 – Gearbox are iterating on an incredibly strong formula, and the most important factor is that it feels necessary and exciting now we’ve had years of boring, uninspired looter shooters.

Stripping away some of the service aspects and focusing on the gameplay side that matters is a successful route for Gearbox to take, and hopefully the game will get the same post-launch support seen in Borderlands 2.

I’m sure we’ll find out more as we approach release, but both newcomers and veterans are going to get a lot out of the new game – the extra bells and whistles are much appreciated.