Usually reference characters or bosses are relegated to side conten,t or hidden in the world somewhere for curious players to discover, but that’s not the case with Borderlands 3 and the Pain and Terror bosses. This duo of oddly familiar bandits are placed right in the limelight as part of the main story of the game. Despite being a cheeky reference to a real life (non-bandit) duo, these two are no joke when it comes to difficulty. If you don’t want them to fool you, our guide will show you all the tricks on how to beat this dangerous pair.

Pain And Terror In The Borderlands 3 Story

The characters of Pain and Terror were a team long before the events of Borderlands 3, but were drawn into the Children of the Vault when the Calypso Twins appeared on Pandora and enticed them with their promise of family and community. They were put in charge of the Eridium deposits in the Splinterlands and amassed a massive following of carnage obsessed bandits and psychos.

Over time Pain and Terror would eventual begin a yearly tradition to celebrate their love for violence in Carnivora, which is also the name of just one of their massive vehicles. During the story mission Blood Drive you will be sent to rescue Tanis from the pair during the yearly festival. 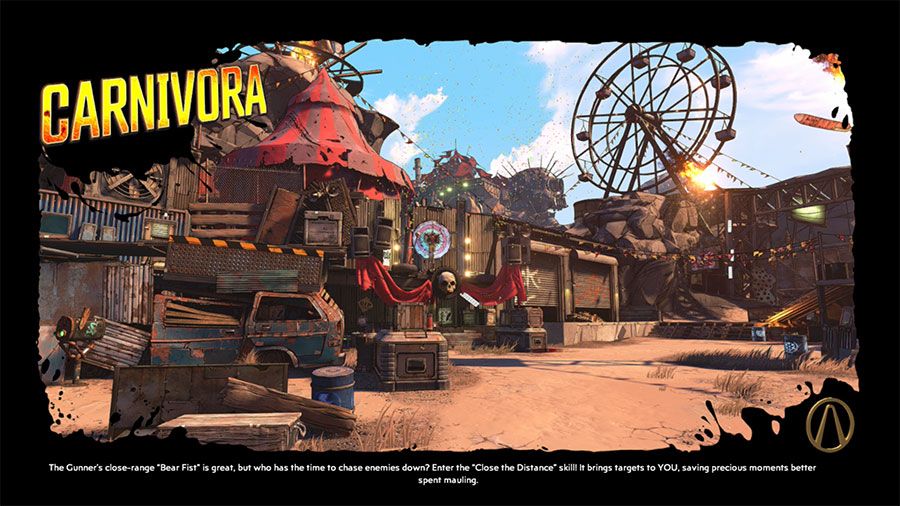 You should already be on Pandora, but if not, that’s where you want to start. As you follow the Blood Drive quest line you will be sent to a locked gate you need to ram or shoot your way through. Keep heading West where you will stop at Roland’s Rest to speak with Vaughn and get some intel. Now you can go to the Carnivora Festival, but in order to be allowed in you need to offer up your vehicle, but the one you have isn’t deemed good enough.

You’ll need to go on a slight detour to steal a gold car and feed that into the machine at Carnivora to make it inside. You’ll fight through a few areas, then have a vehicular battle against the titular Carnivora vehicle back outside. Only after destroying this and rescuing Tannis can you use the elevator to reach Pain and Terror.

Tips For Beating Pain And Terror 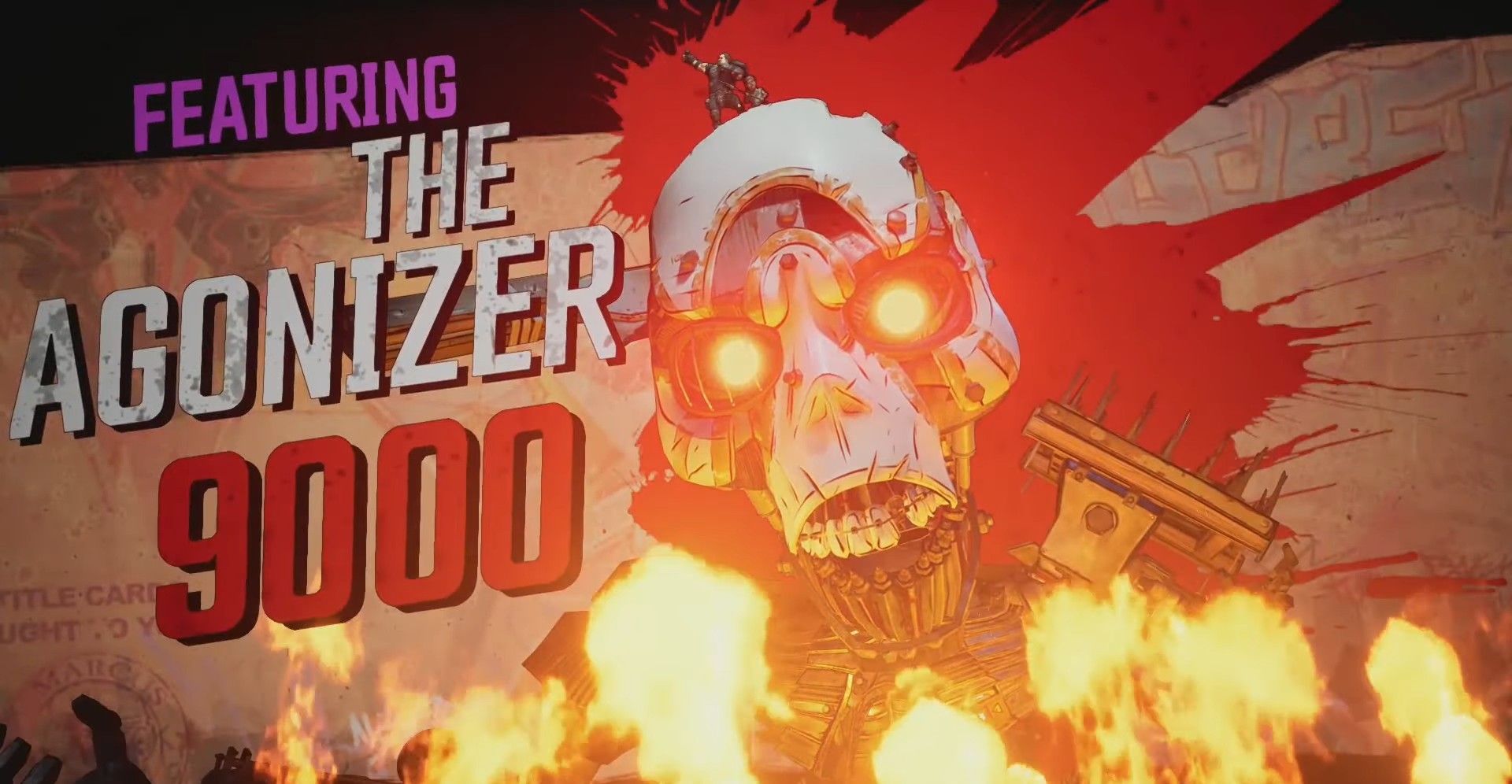 After their traditional Borderlands 3 introductory sequence, Pain and Terror will both enter a big mech called the Agonizer 9000. Rather than having to fight the pair separately, all you need to do to win is beat the mech.

The Agonizer 9000 has very specific weak points, so only precise weapons like a sniper rifle will be useful here. Your first target will be the big red fuel tanks attached to the mech. Circle around as you take them out, watching the blades to either jump over or duck under depending on how high they are. If you keep strafing you should be safe from the sawblade attack that shoots straight out ahead of it, but you’ll also need to keep an eye on the floor panels. They’re all trapped, and if it starts to glow red you need to make sure to not be on it when the fire erupts. 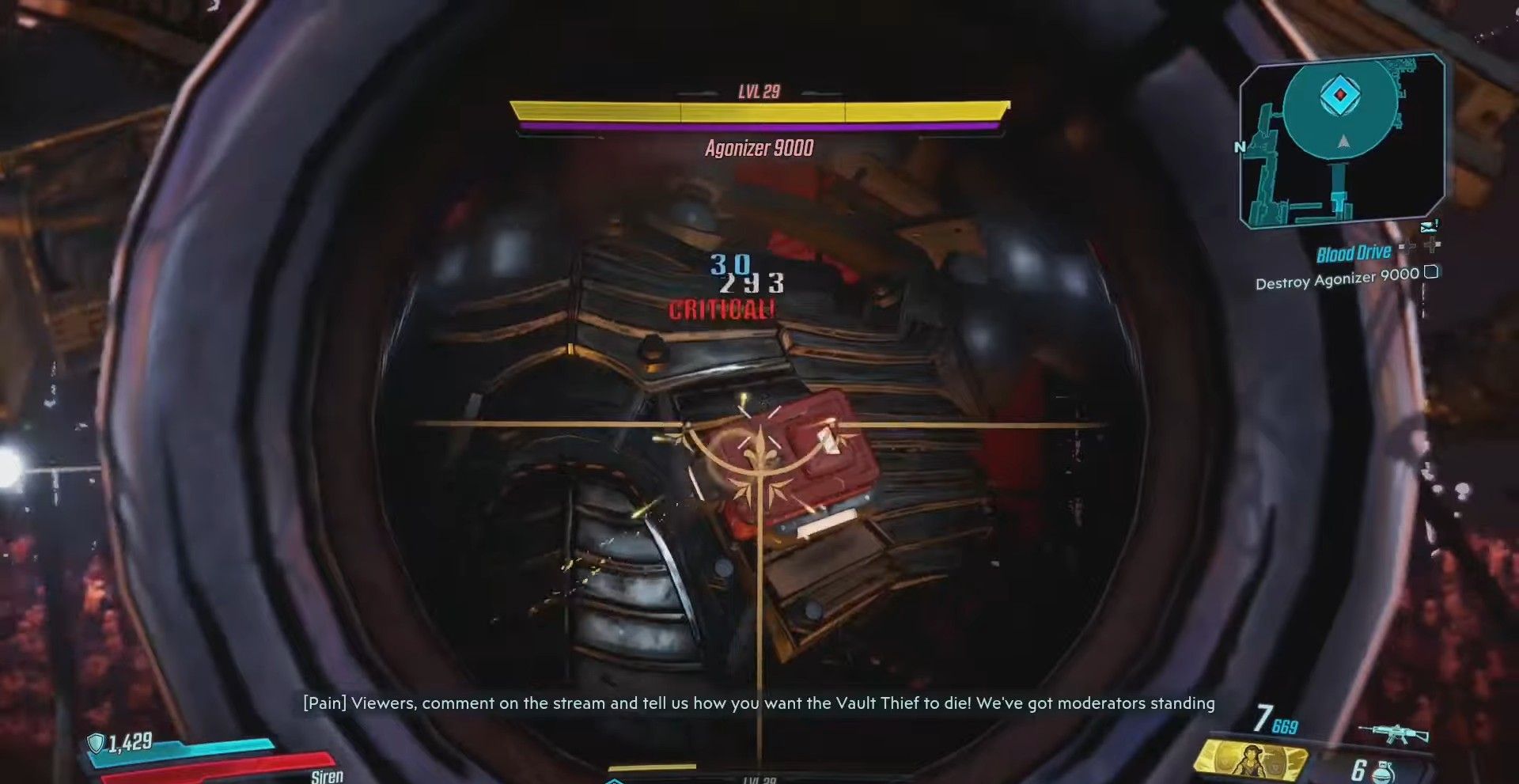 The last attack you need to worry about is when they try and squash you with a spiked plate from above. Again, if you just keep moving you should be fine, but there’s also a glowing red danger zone that appears where it will hit.

After all the gas cans are blown up, focus fire on the Agonizer’s eyes. Once his armor is depleted the center of the mech will open up and expose a purple glowing core. Fire everything you’ve got into this until the mech is toasted. 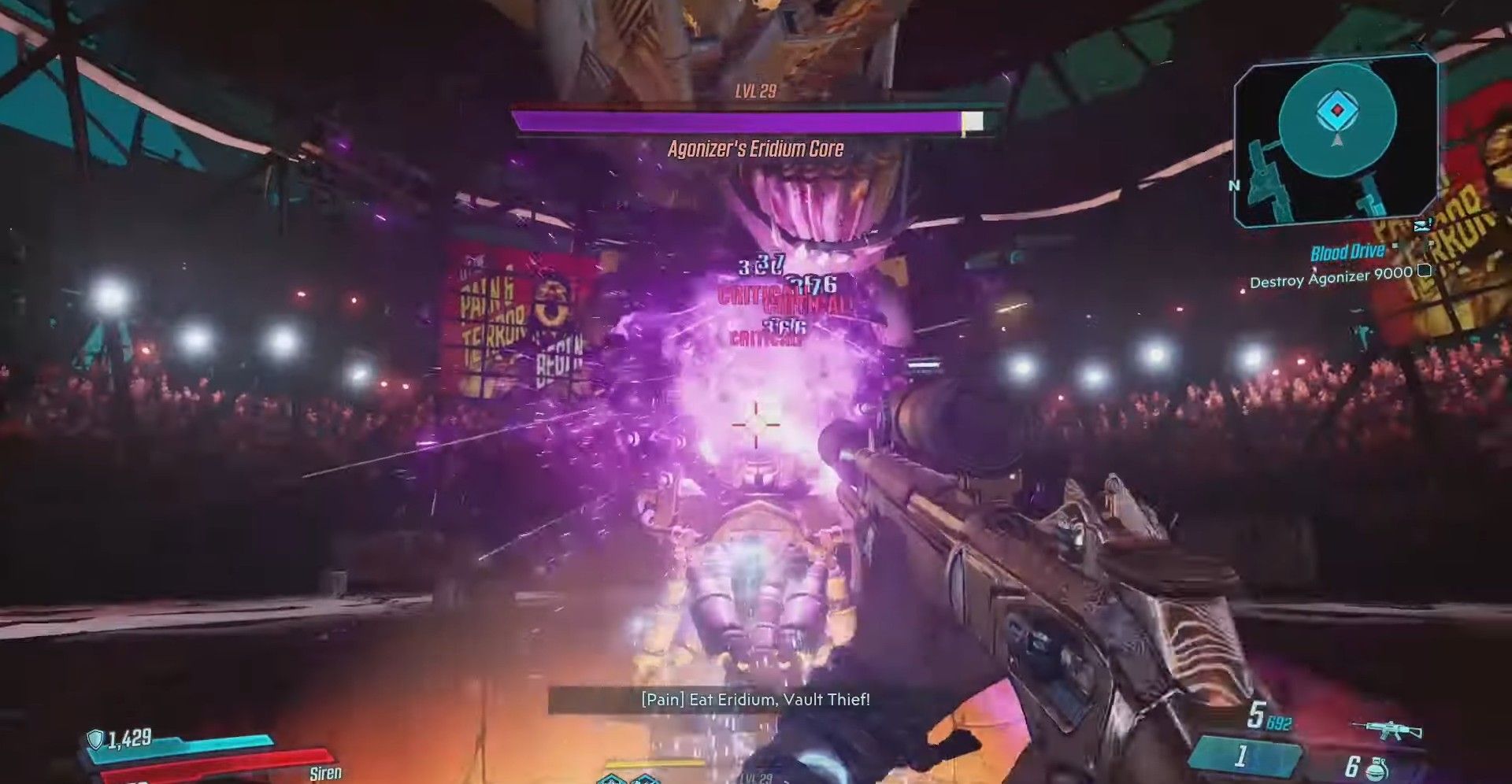 If their names weren’t enough of a giveaway, these two were based on the famous pair of magicians Penn and Teller. In fact, Penn actually voiced the character Pain, who even shares his iconic red left finger nail, while Terror has his mouth sewn shut to reference how Teller never speaks in their acts.