Activision is kicking off Season 4 for both Call of Duty: Modern Warfare multiplayer and its Call of Duty: Warzone battle royale modes. It’s a big update that will deliver new maps, features, and battle modes.

Modern Warfare is one of the most popular Call of Duty games in years, and the free-to-play Warzone mode has had more than 60 million downloads in a couple of months. Season 4 has been eagerly awaited in part because it was put on hold for 10 days during the recent unrest.

And Captain Price, one of the lead characters in the Modern Warfare story, will show up as part of the ongoing narrative for the backstory behind the multiplayer combat. Price arrives amidst the chaos to help put an end to the ongoing conflict between the Coalition and Allegiance forces in the city of Verdansk, where Warzone takes place. 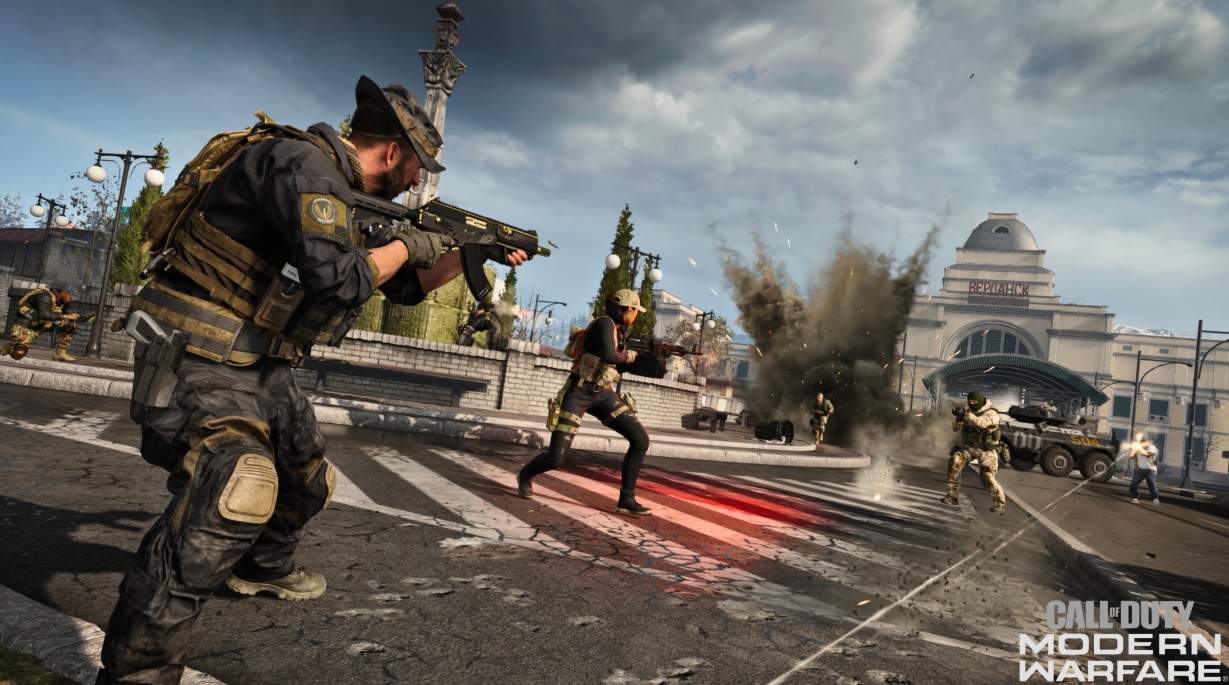 Above: Season 4 of Modern Warfare multiplayer is here.

For Warzone, the updates will introduce three major in-game elements that will bring players into closer combat. The three events will happen after the first drop kit and before the Gulag (the prison where eliminated combatants go for single combat) closes. The events can happen with very little notice.

With Jailbreak, all of the eliminated players who are awaiting single combat in the Gulag are released back into the map. This can mean a lot of players will parachute into the map at once. Players get a minute’s notice so they can find and tag weapons for the parachuting returnees to pick up. This should encourage players to stick around and specate, even after they die.

Another event dubbed Fire Sale will dramatically lower the prices that you have to pay at Buy Stations on the battle royale map. In Warzone, you can pick up money loot on the ground or take it from downed soldiers. You can use that money to buy back other players in your squad who have been killed. You can also buy a self-revive kit, armor, and Killstreaks like Cluster Bomb Attacks. But the prices are pretty steep for most of the things you buy.

With Fire Sale, the price of the items in the Buy Stations drops dramatically (up to 80% or even free), but it only lasts for a minute. So that means everybody will rush to a Buy Station at once, and that will force a lot of combat. A Fire Sale would be the perfect time to pick up a unmanned aerial vehicle (UAV, or recon drone), an armor box for your squad, or a lethal Killstreak. During a Fire Sale, you could buy back a dead comrade for free; normally, that costs $4,500, a steep price in the game. The only thing that isn’t discounted is a Loadout Box, which parachutes onto the field and gives you your favorite Loadout from Modern Warfare.

Lastly, a Supply Chopper could show up. It is a heavily armored helicopter flying over the Verdansk map. It can take a lot more damage, like a couple of rocket hits. But if you bring it down, the chopper will rain down a bunch of supplies when it crashes. The loot includes three UAVS, two armor boxes and munitions boxes, a gas mask, a grenade launcher, and tons of cash at a minimum.

If no one shoots the chopper down, it leaves the battlefield. 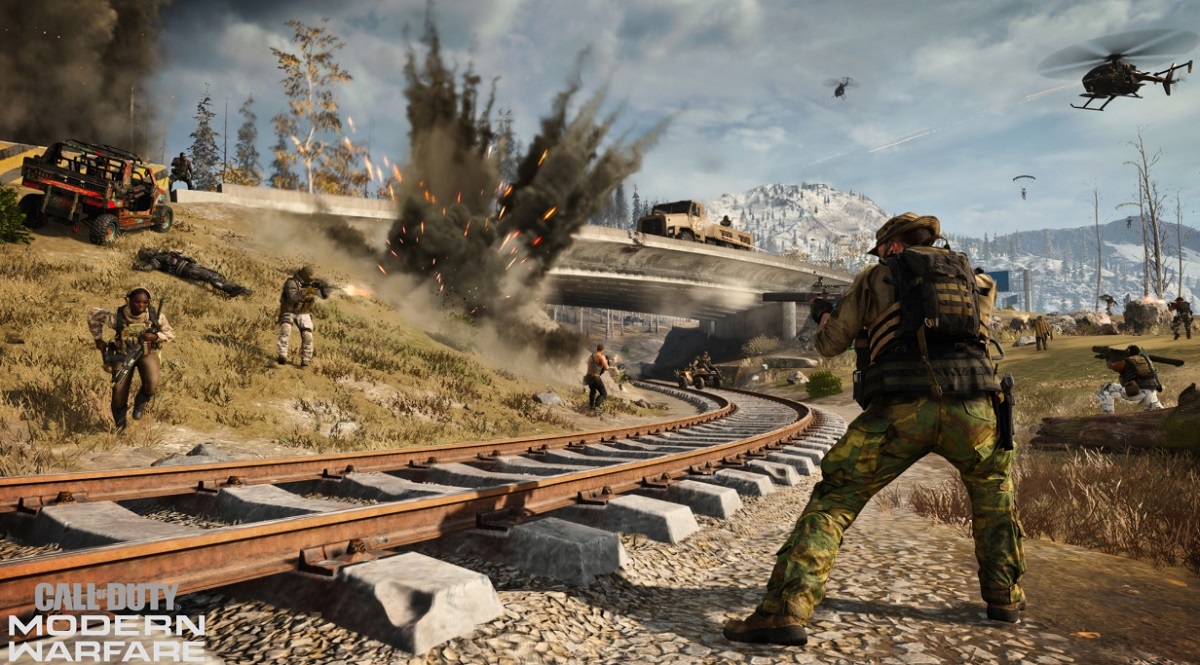 Above: Modern Warfare is getting an update with Season 4.

During Season 4, limited-time modes will debut. In Juggernaut Royale, the massive Juggernaut suit drops into Verdansk in the form of three different airdrops. Once you get to each location, you can don the suit. With it, you’ll have higher health, a mini-gun, and a sweet music track to accompany you during the Warzone match.

You’ll still be able to ride in vehicles and climb ladders, and your zero-fall damage will be accompanied by a ground pound of damage that impacts anyone in the immediate area. If any of the Juggernauts are sent to the Gulag, after a brief delay period, a new Juggernaut care package will be marked on the Tac-Map and deploy into Verdansk.

The game will also have a Realism mode, where you have a minimal heads-up display but can deal increased damage with headshots. And the Warzone Rumble will let you face off in Verdansk in a giant Team Deathmatch battle. In this mode, 50 human players will battle 50 others. 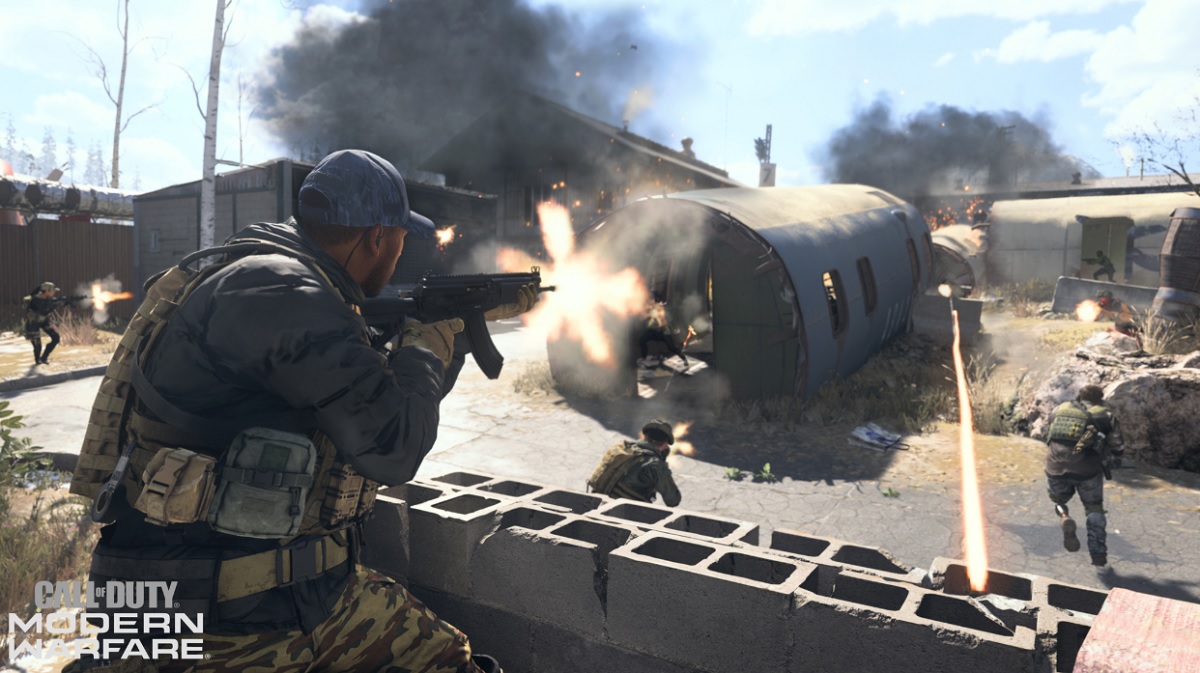 Above: The Zhokov Scrapyard map in Modern Warfare is back.

Modern Warfare multiplayer will get a new map, a new Ground War battlefield, and a Gunfight map.

The latest multiplayer maps for 6-versus-6 players are Zhokov Scrapyard and Hardhat. In addition, there will also be a Gunfight playlist during the Free Access Weekend featuring seven maps.

Owners of the full version of Modern Warfare can get Zhokov Scrapyard, a standard multiplayer map from Call of Duty: Modern Warfare 2. It’s a frenetic map with a scrapped airliner in the middle of it. I remember this as a frenetic, small map where death comes fast. You can use full-metal jacket bullets to pierce the airplane hull to hit enemies.

In Barakett Promenade, players will get a new Ground War map (up to 64 players). It has a lot of rooftops for vertical fighting, and plenty of building interiors too.

And the Trench map is a new one for the one-on-one or two-on-two Gunfight matches. This map is a network of interconnected trenches. You can get up and move quicker by rising up out of the trenches, but you are more exposed when you do that.

You can also use a Battle Pass in-game purchase to get Captain Price and his Operator Missions. When you charge into a fight with Price, the familiar Ride of the Valkyries battle horn will play.

There are also a bunch of other features and modes you can see here.

Apex Legends: Everything We Know About Fuse, Maggie,...

How much of my budget should I spend...