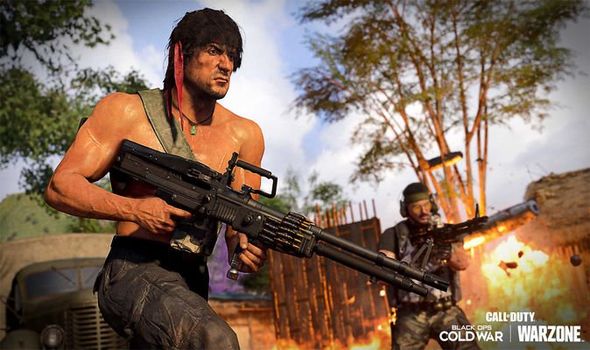 A new Call of Duty Warzone update is going live today and will bring a lot of changes to Cold War Season 3.

As confirmed in the official patch notes, both John McClane from Die Hard and John Rambo will become playable Operators this week.

New bundles including both characters will be available to purchase from the Call of Duty Store, with more content being planned for Season 3 Reloaded.

Game developers Raven Software have also announced plans to change key locations in Warzone to give them more of an 80s action movie vibe.

The downtown skyline will be transformed by introducing Die Hard’s Nakatomi Plaza, which is relocating from sunny Los Angeles to Verdansk for a limited time.

This will be the tallest single structure seen in Warzone and includes five floors of space familiar to fans of the original Die Hard film.

The Plaza will be replacing the Broadcast Tower usually found on the map, along with the other buildings and surrounding blocks that normally define Downtown’s southern district.

Raven Software has confirmed that Nakatomi Plaza will feature multiple optional missions that can be completed in-game that will unlock special rewards.

This includes exploring the tower for Supply Boxes, defusing C4 on the tower’s roof, and interrupting an arms deal gone wrong.

New locations from the Rambo series are also being introduced, including a number of Survival Camps as a homage to Rambo: First Blood Part II.

There will be a total of ten camps spread across the map, which will be filled with cosmetic loot that can unlock a bigger in-game reward.

Another area Rambo fans will want to visit is the aircraft hangars in Verdansk’s northwest sector, which will be converted into a makeshift CIA Outpost.

WHAT IS THE CALL OF DUTY WARZONE UPDATE TIME?

Activision has confirmed that the Call of Duty Warzone update time has been set for 5am BST on May 20.

This will be when all Cold War Season 3 Reloaded content will be launched, including the new operator skins.

Server issues could arise when this patch is rolling out across PS4, Xbox One and PC, but no maintenance has been scheduled.

A message from Activision adds: “Serving time for murder, highly decorated MACV-SOG soldier John Rambo is offered one more mission – return to Vietnam and locate American POWs. If successful, he will be released, and given a full Presidential pardon…

“This Operator will be available via the “Rambo” bundle in the Black Ops Cold War and Warzone Store from May 19 at 9PM PT to June 18 at 9PM PT.

“This bundle includes the Legendary Operator; two Finishing Moves, including one using his signature bow and arrow; three Legendary Weapon Blueprints—an assault rifle, an LMG and a Knife Blueprint; a Legendary Calling Card and Emblem; and an Epic Watch and Charm.

“John McClane will be available via the “Die Hard” bundle in the Black Ops Cold War and Warzone Store from May 19 at 9PM PT to June 18 at 9PM PT. This bundle includes the Legendary Operator, a Finishing Move, three Legendary Weapon Blueprints—one tactical rifle, two SMG, and one assault rifle—a Legendary Calling Card and Emblem, an Epic Watch, and an Epic Weapon Charm.”