It’s likely that no one expected Castle Crashers to be the hit it was when it was released for the Xbox 360 back in 2008. The game allowed players to battle across dozens of fantastic levels with their friends in order to not only rescue a group of princesses but also to save the entire world.

The story may not be the most in-depth plot ever put in a game, but that didn’t stop many gamers from instantly falling in love with the simple beat ‘em up. The game offers a wide array of levels for players to make their way through, but also explore on repeat playthroughs as well. Some are simple and straightforward, while other levels require some degree of backtracking to be fully explored, but every single level is filled with some degree of over-the-top humor. Here are the best. 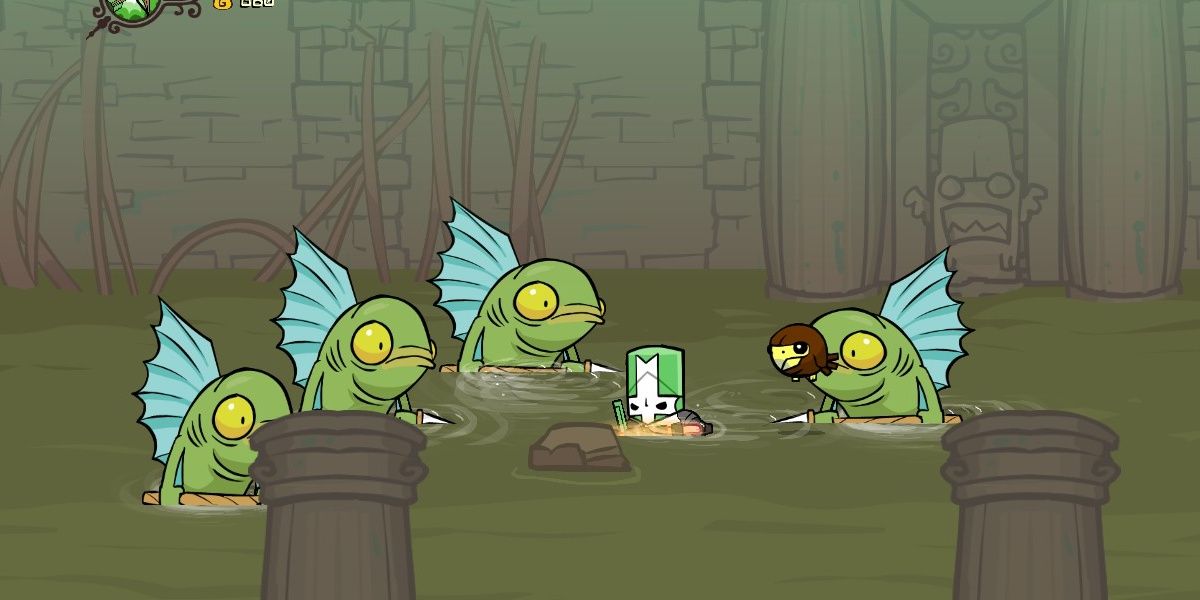 The Flooded Temple is a great level because while it can prove incredibly difficult for a solo player with the wrong character builds, the difficulty still doesn’t feel unfair. The best way to experience the level is with a group of friends so even if one player has a weak element, another can make up for that weakness.

Many players seem to agree that the best strategy for handling the levels creepy Fishmen is to utilize various elemental splash attacks. Whether frustrating or not, the level doesn’t outstay its welcome thanks to its short length. 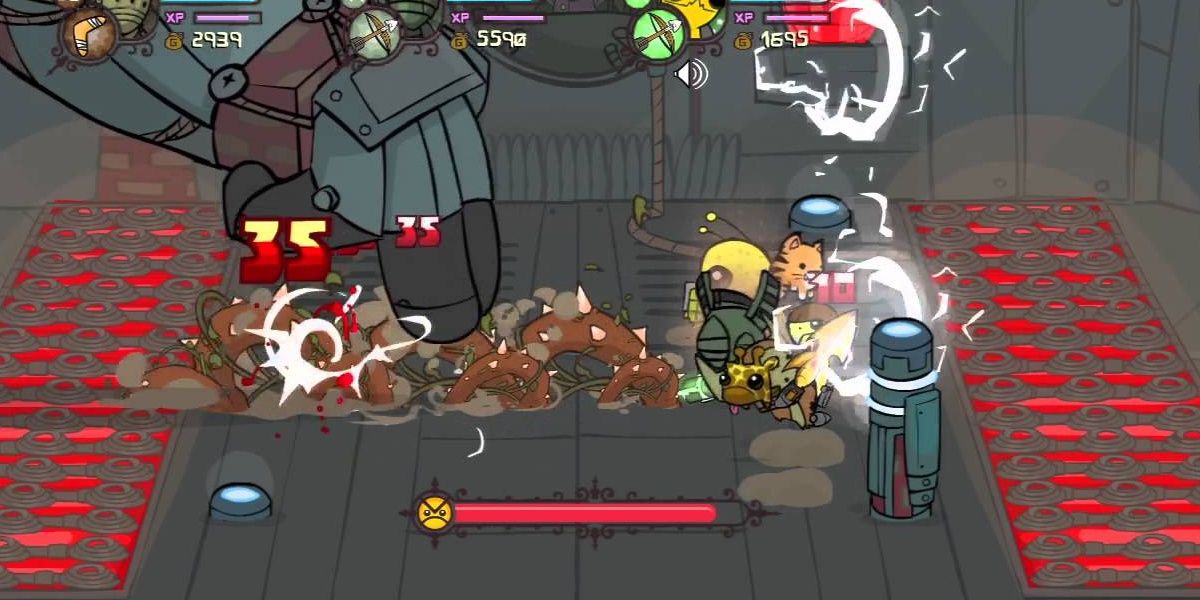 Depending on the stats and abilities of the player entering the Industrial Castle, this level can prove to be quite a fun challenge. The level itself can’t be accessed until the player finds themselves some of the game's sandwiches, a food with a power that may have players thinking about Popeye.

The level is filled with enemies that tend to deal a lot of damage and a boss fight that is sure to give players a serious challenge upon their first attempt. It’s all worth it when players finally get to knock the pompous Industrial Prince out of his castle. 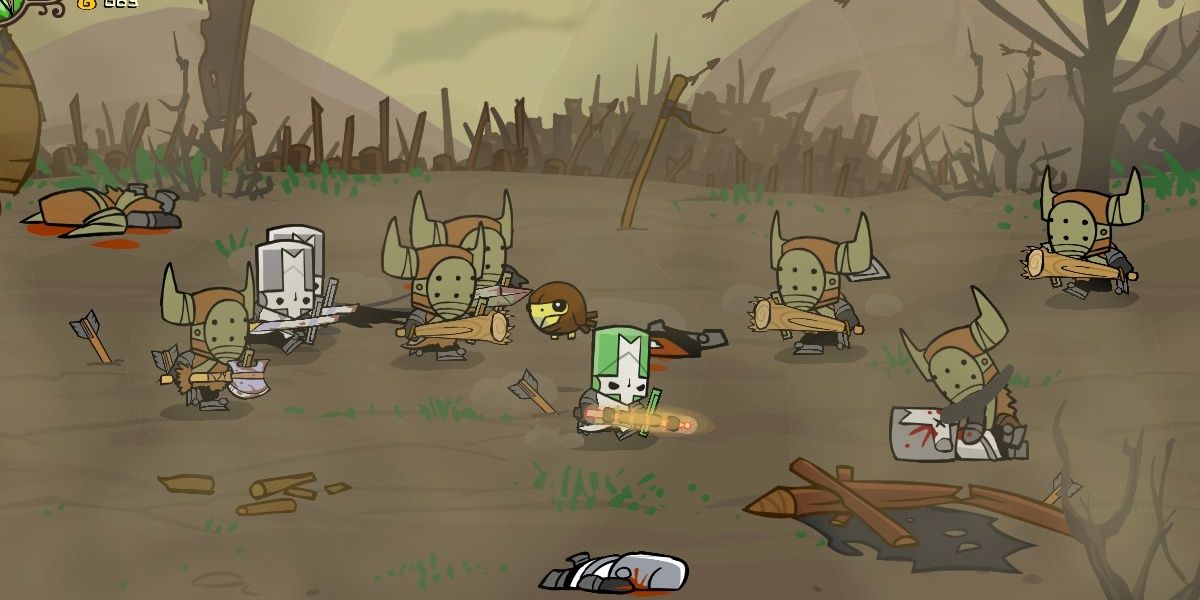 While the first levels of Castle Crashers let players get accustomed to the controls, the Barbarian War level in Chapter 2 throws players into the deep end for the first time. The level also introduces one of the game's many side items, the occasionally useful bow and arrow.

The level can actually be quite difficult for those who still haven’t mastered many of the game's mechanics. It throws plenty of enemies of different varieties at the player and even features a fun miniboss called The War Machine. 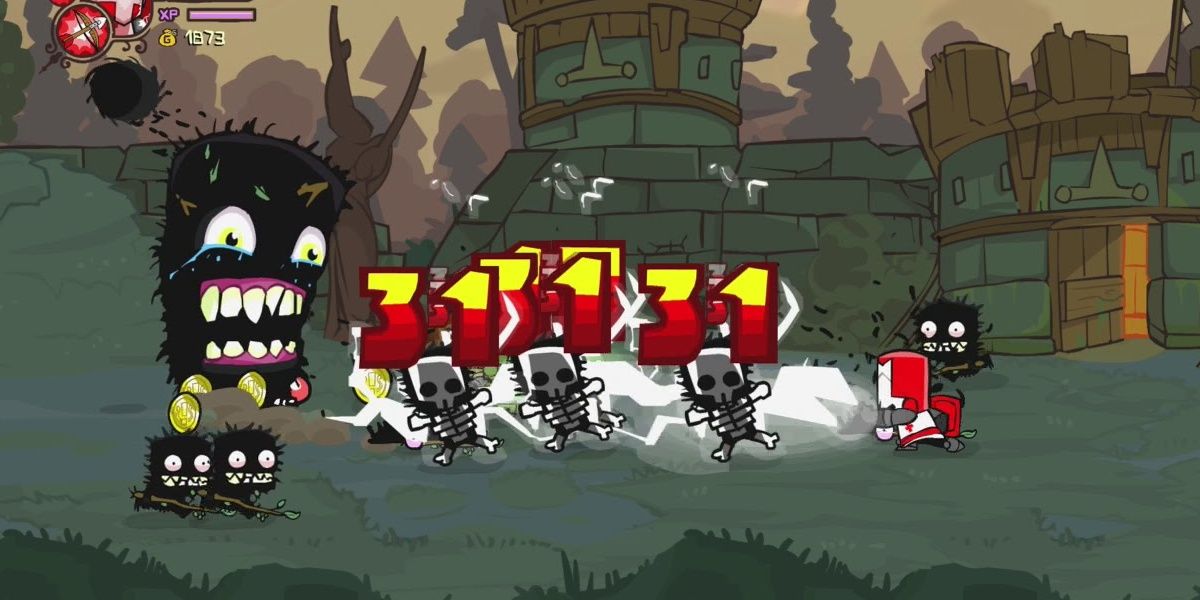 For players who really love the simple yet addictive combat in Castle Crashers, the Marsh level may be one that they replay the most. The level provides players with the opportunity to get six different weapons, and two new animal companions.

The level features multiple segments in which the player must fight tons of enemies in waves. One wave even features another version of the Troll Mother boss fight from the Thieves’ Forest level. This level also features a fight against Beefy Skeletons that can destroy players in seconds on harder difficulties. 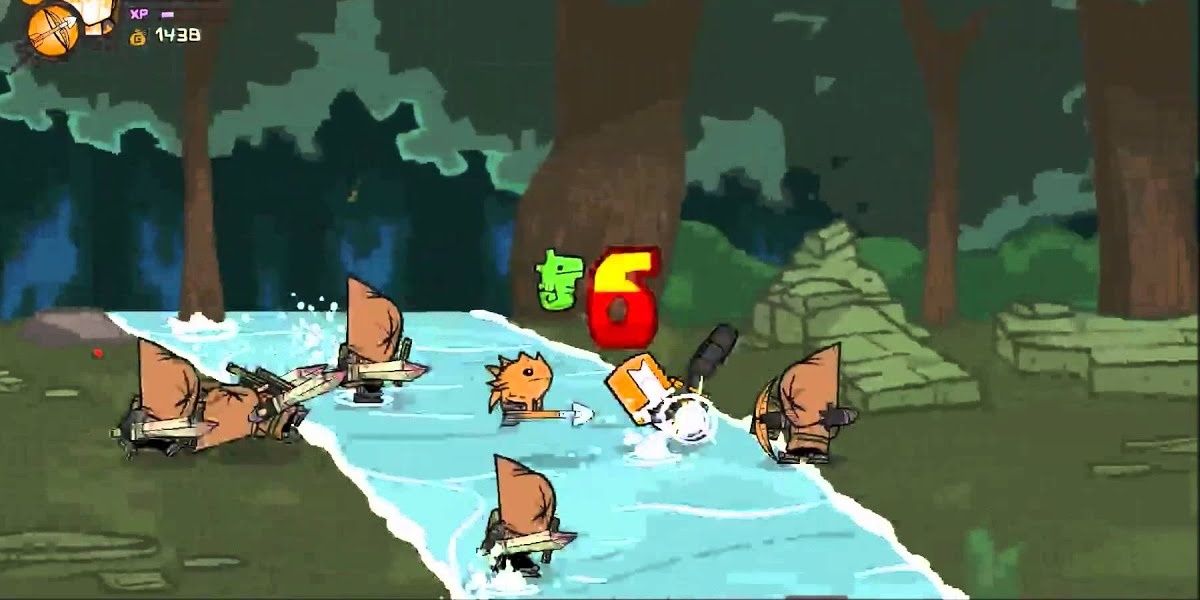 While the level itself is incredibly fun for players to make their way through as a team, one of the best and most hectic parts is the boss of this level. The level seems to be one of the longer ones in the game with plenty of lengthy enemy encounters.

There’s plenty for players to find in the level with two different animal companions and lots of different weapons. The end of the level features the Troll Mother boss, which can also be used as a great way to get some quick experience. 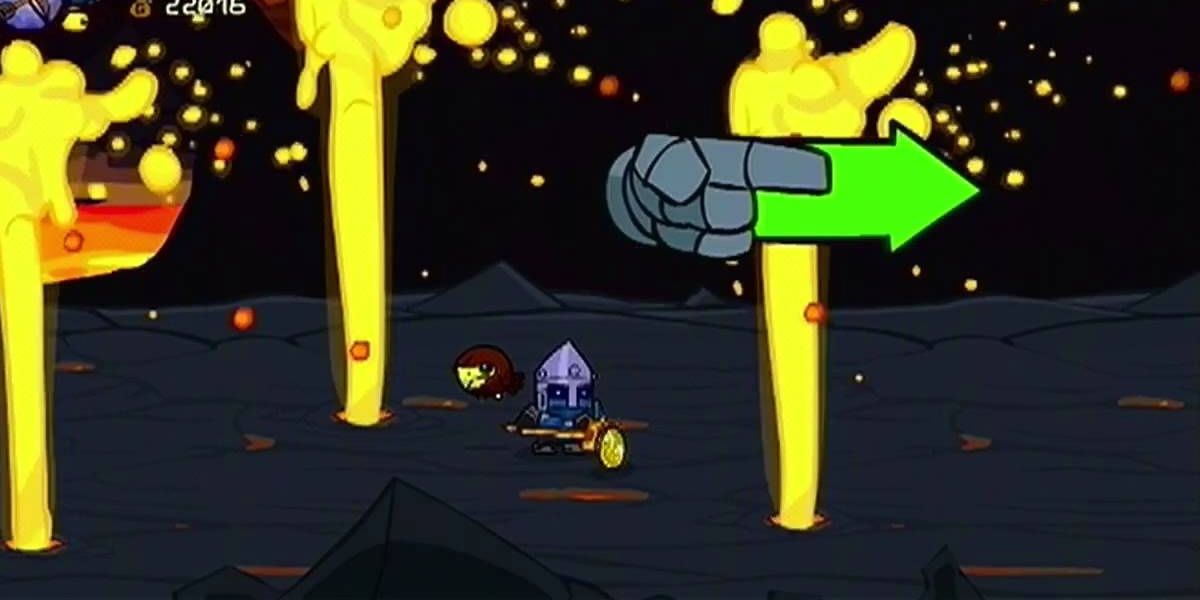 The Lava World level is a fun departure from the standard fantasy-style levels that the early game offers. The level heavily features enemies that rely on fire magic, and they can deal a serious amount of damage to most players that haven’t done any grinding.

The level features two different boss fights, and while they aren’t the toughest fights in the game, the level's length can leave players wishing for a potion. A great level for single players, it’s even better with a group thanks to the hectic and hilarious Sock Puppet Dragon. 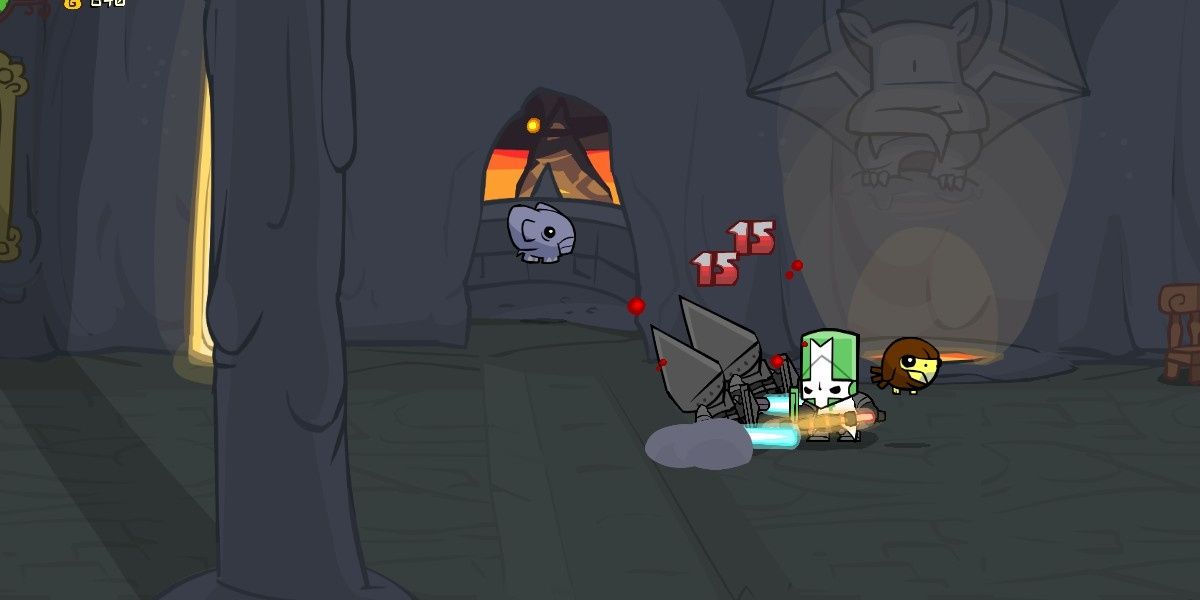 If there is one boss that stands out to most players, it’s likely that it’s the Cyclops thanks to his over-the-top personality and fun boss fights. Thankfully, his fortress is a ton of fun for players to fight their way through.

The level provides a challenge for even veteran players when played on the highest difficulties thanks to heavy waves of enemies that can have some annoying attacks to deal with. The end of the level features a challenging, but fun boss fight against the Cyclops and a brawl for players who play with friends. 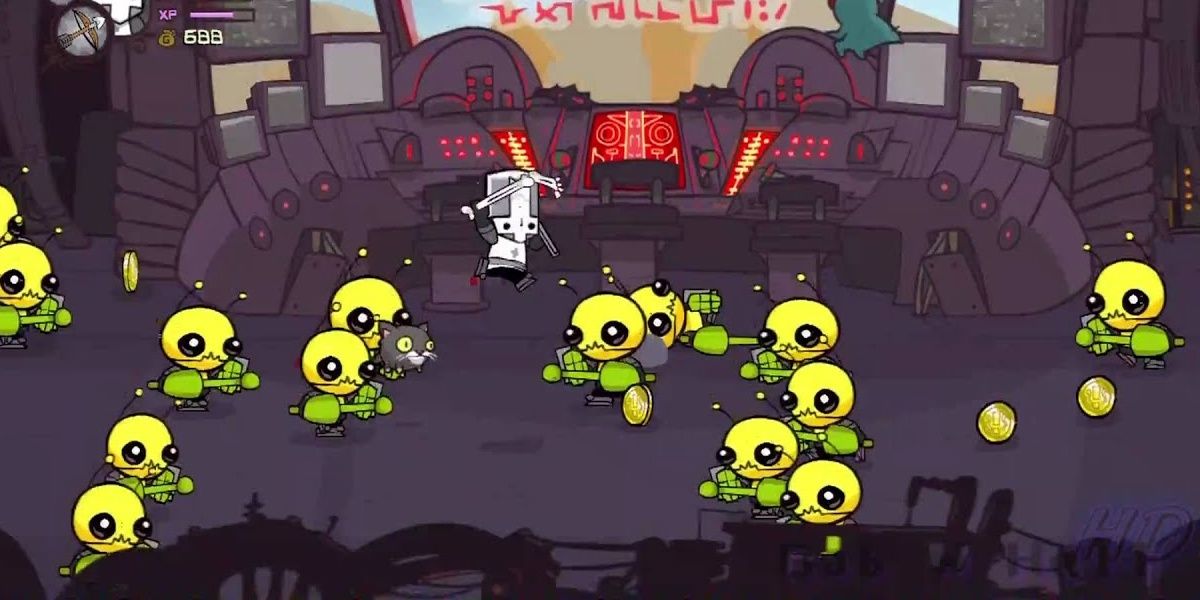 There are a lot of reasons as to why the Alien Ship is so much fun. Fighting off the familiar alien creatures, the intense self-destruct dash, and of course, the great humor all make this one of the best levels in the game.

The level is often regarded as a bit of an easier one, but that’s usually veteran players describing it that way. Eagle-eyed players will be able to find another companion in this bombastic alien-filled level. A funny quirk is that with a full group, there will be a player left behind in the explosion of the ship. 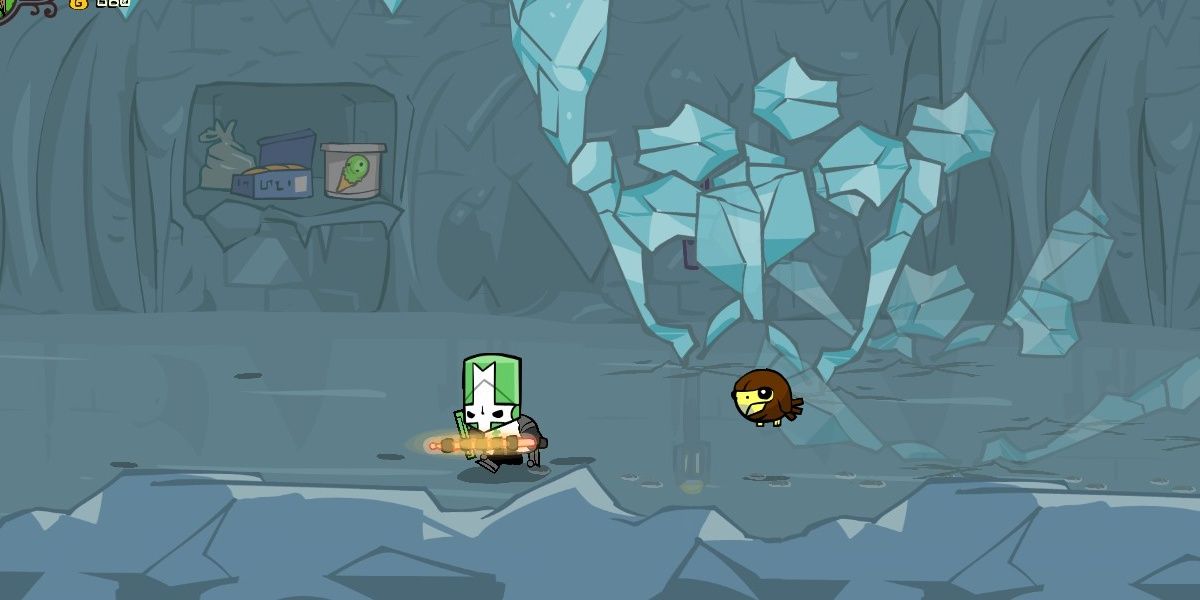 While the Ice Castle is a fantastic level based just on music and visuals alone, its tough enemies make it a lot of fun to fight through with friends. The level is also home to the boss fight against the Frost King where the players can save the Blue Princess.

Something that makes the level so much fun is the constant back and forth between the players and the Frost King. The fight against him can be difficult, but there are ways to nullify his freezing effects. As many players might guess, the Red Knight can really be useful for this tough fight. 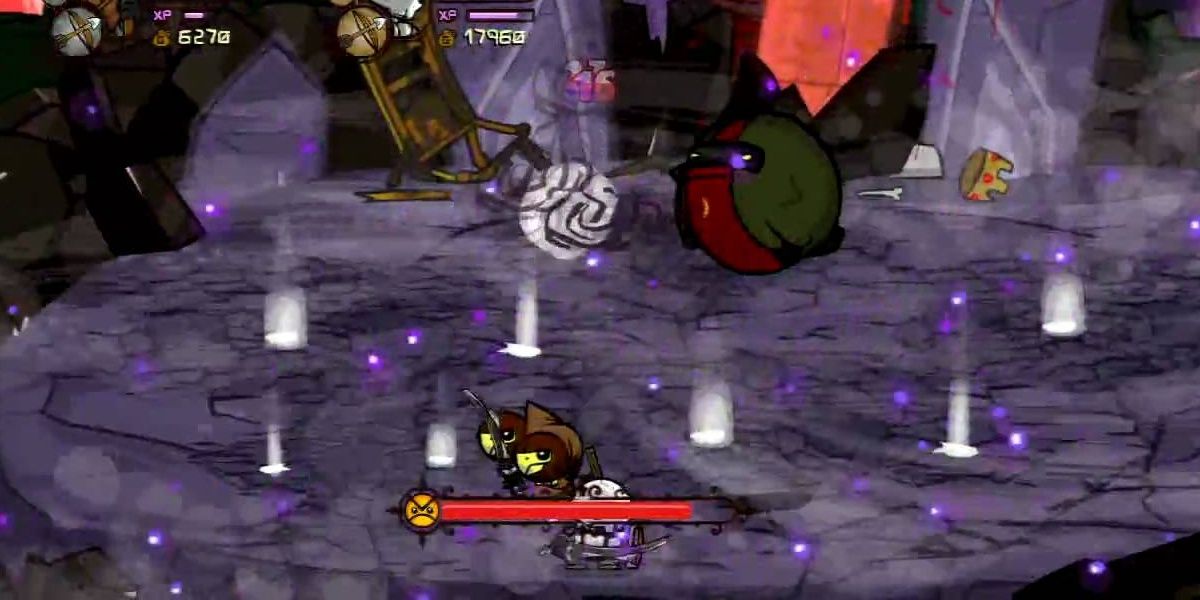 It shouldn’t be that surprising that the epic Final Battle level is often considered one of the best levels in all of Castle Crashers. The level itself is incredibly straightforward since it’s just the final boss fight of the game.

Players have to battle the Evil Wizard through his various forms in a tough fight. Those that persevere with a group of friends will then have one final battle to determine not only who is the best knight, but also who gets the love of the Orange Princess.