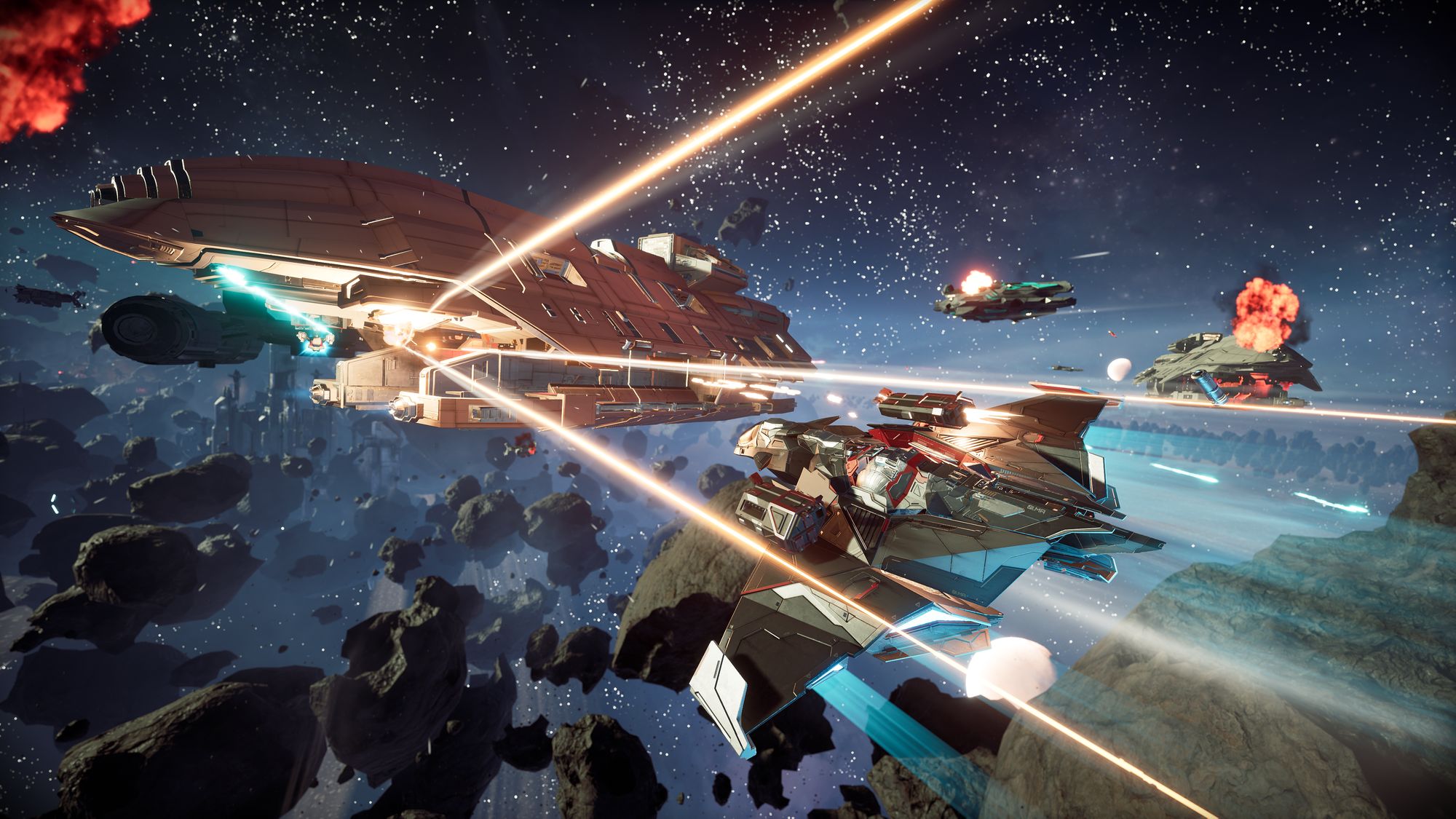 If movies and early video games were anything to go by you’d assume flying around in a spaceship was a pretty common fantasy and the perfect inspiration for a modern high-tech game. The unfortunate truth is that nowadays it’s extremely rare to see the subject broached in anything but a cut scene, with most developers shying away from what tend to be fairly complex games that constantly require you to manoeuvre in three dimensions – something bigger publishers long ago decided was too complicated for casual gamers.

Space combat simulators used to be a whole genre unto themselves but now you’re more likely to see a new 2D shooter than something similar to classics like Star Wars: X-Wing or FreeSpace. Or at least that was the case up until last year, when EA released Star Wars Squadrons – not only a spiritual to successor to the X-Wing series but a really good game in its own right.

A new FreeSpace is probably asking too much but instead there’s Chorus, a wholly original space combat simulator that despite some rough edges proves that flying around in a spaceship, shooting bad guys with laser guns, really is as much fun as it looks.

The biggest problem with Chorus is not the difficulties of three-dimensional combat but the fact that the storytelling is aggressively uninteresting from the very first cut scene. Clearly, it’s not easy to create an entirely new fantasy universe, especially one that has to explain why you’re sat in a spaceship cockpit the whole time, but playing as Nara – former right-hand woman to a genocidal cult leader – is not the most compelling narrative you’ll come across this year.

Nara has magical powers that once allowed her to blow up an entire planet, which she later decided to feel bad about and now works in a loose rebellion of conspirators trying to bring down the ‘Circle’ and its Great Prophet. The dialogue to explain all this is never engaging and Nara’s habit of constantly talking to herself in a spooky whisper, usually to subvert whatever she says aloud, gets old very quickly.

What doesn’t, thankfully, is the space combat. Although that’s a bit of a misnomer as you’re often not flying about in deep space and usually through some asteroid field or other debris-filled location that works as one of a series of open world hubs. These areas are treated to their own Ubisoft style map, complete with side quest icons and fast travel systems where you can shoot yourself through the sci-fi equivalent of a pneumatic tube.

In that sense the game couldn’t be further away from something like FreeSpace, although it does bear more similarity with its parent franchise Descent. Chorus regularly finds excuses for you to be flying around inside closed environments, whether it be larger spaceships, hollow asteroids, or a serious of interdimensional rifts that are the source of Nara’s powers and allow her to gain new ones.

The mission design does its best to avoid the ‘go here and kill someone’ problem of all open world games and it’s helped by the fact that the starfighter combat is both intrinsically fun and (unfortunately) novel. This isn’t the fifth open world first person shooter of the year but an enjoyably unusual game in terms of its systems and structure.

The combat works similarly to any space-based game and the handling of your ship feels good from the start, with the three categories of weapons (short range gatling guns, shield-removing lasers, and armour-destroying missiles) ensuring you have to constantly switch up your approach. The fact that you’re rarely in empty space means the game avoids the problem common to the genre, of you and your target flying round and round in circles, and while the targeting system can sometimes be a little unclear the action flows very well.

It’s telling though that the best parts of the game are when Chorus is most like X-Wing and FreeSpace, during one of several space battles that involve giant-sized capital ships and multiple different factions. The open world stuff works fine but it does feel like the designers trying to compensate for traditional space combat simulators not usually being big sellers – and yet here it is being the best part of the game.

You can upgrade your spacecraft in the expected manner but there are also a number of superpowers for Nara to unlock, starting with a simple detective vision ability and then moving on to things like teleportation and telekinesis. There’s a little too much emphasis on these powers by the end, which dilutes the core combat somewhat, but it’s obvious they’re there to ensure variety and in that respect they work well.

Chorus is clearly a lower budget title but it’s sensibly priced and while the graphics can vary considerably depending on the location, they’re occasionally very impressive – not least in the fact that, like the gameplay, they’re doing something you rarely see in modern video games.

The storytelling does drag the experience down, especially given the mediocre voice-acting, but otherwise this is an imaginative and ambitious AA game that deserves a wide audience. We’re not optimistic enough to think it, or any other game, will inspire a new renaissance in space combat simulators but Chorus at least proves that the genre is relatively malleable and still has plenty to offer modern gaming.

In Short: An extremely solid space combat simulator that struggles in terms of storytelling, and doesn’t entirely justify its open world approach, but still offers an enjoyably unique experience.

Pros: The core combat is excellent, with a good amount of variety in terms of weapons, objectives, and opponents. Surprisingly varied locations and the use of more enclosed areas works well. Sensibly priced.

Cons: Everything to do with the story drags the game down, from the dialogue and characters to the plot itself. Open world elements are ultimately fairly generic.