The boom in Internet-connected devices means there is an unprecedented amount of data being collected, leaving enterprises with the challenge of storing, securing, and processing the data at scale. The sheer amount of data involved is driving the case for edge computing, even as enterprises continue with their digital transformation plans.

Edge computing refers to moving processing power to the network edge–where the devices are–instead of first transferring the data to a centralized location, whether that is to a data center or a cloud provider. Edge computing analyzes the data near where it is being collected, which reduces Internet bandwidth usage and addresses security and scalability concerns over where the data is stored and how it is being transferred. The main drivers are Internet-of-Things and real-time applications that demand instantaneous data processing. 5G deployments are accelerating this trend.

Enterprises have been focused on moving their applications to the cloud over the past few years. Analysts estimate that 70 percent of organizations have at least one application in the cloud, and enterprise decision makers say digital transformation is one of their top priorities. However, there are some limits to an all-in cloud strategy as more data-hungry applications come online.

By 2025, 175 zettabytes (or 175 trillion gigabytes) of data will be generated around the globe, and more than 90 zettabytes of that data will be created by edge devices, according to IDC’s Data Age 2025 report. That is a lot of data that needs to be uploaded some place before anything can be done with them, and there may not always be enough bandwidth to do so. There is also the question of latency, since it would take time for data to travel the distance from the device to where the analysis is being performed and then come back. And finally, there is the question of network reliability. If the network is unavailable for some reason, then the application is essentially offline.

“You’re backhauling data to a cloud that’s far way, miles away,” James Thomason, CTO of EDJX, which provides a platform that makes it easy for developers to write edge and IoT applications and secure edge data at the source. “That’s an insurmountable speed of light problem.”

Analysts estimate that 91% of today’s data is created and processed in centralized data centers. By 2022 about 75% of all data will need analysis and action at the edge.

“We knew when we started EDJX that the pendulum would have to swing from cloud and centralization back to decentralized,” Thomason said.

The case of edge in enterprises

Edge computing isn’t limited to just sensors and other Internet-of-Things, but can involve traditional IT devices, such as laptops, servers, and handheld systems. Enterprise applications such as enterprise resource planning (ERP), financial software, and data management systems typically don’t need the level of real-time instantaneous data processing most commonly associated with autonomous applications. Edge computing has the most relevance in the world of enterprise software in the context of application delivery. Employees don’t need access to the whole application suite or all of the company’s data. Providing them just what they need with limited data results in better performance and user experience.

“For the first time in history, computing is moving out of the realm of abstract stuff like spreadsheets, web browsers, video games, et cetera, and into the real world,” Thomason said. Devices are sensing things in the real world and making decisions based on that information.

Developing for the edge

Next-generation applications and services require a new computing infrastructure that delivers low latency networks and high-performance computing at the extreme edge of the network. That is the idea behind Public Infrastructure Network Node (PINN), the initiative out of the Autonomy Institute, a cooperative research consortium focused on advancing and accelerating autonomy and AI at the edge. PINN is a unified open standard supporting 5G wireless, Edge Computing, Radar, Lidar, Enhanced GPS, and Intelligent Transportation Systems (ITS). The design of the PINN makes it look no different than a light post, making it possible to deliver computing power without relying on a skyline of cell towers or heavy cables.

According to Thomason, PINN clusters in a city deployment could be positioned to collect information from the sensors and cameras at a street intersection. The devices can see things that a driver can’t see–such as both directions of traffic, or that a pedestrian is about to enter the crosswalk–and know things the driver doesn’t know–such as an emergency vehicle is on the way or that traffic lights are about to change. Edge computing–using PINN–is what will make it possible to do process all of this data and actually take action, whether that is to send a signal to the traffic lights or to an autonomous vehicle to do something differently.

Currently, only vetted developers would be allowed in the PINN ecosystem, Thomason said. Developers write code, which is then compiled in WebAssembly, which is the actual code that runs on PINN. Using WebAssembly makes it possible to have a very small attack surface, very hardened, so that it would be harder for an adversary to break out of the application and get to the data on the PINN, Thomason said.

PINN in the real world

Autonomy Institute announced a pilot program for PINN at the Texas Military Department’s Camp Mabry location in Austin, Texas. The program will deploy PINNs one thousand feet apart on a sidewalk over the 400-acre property. With the pilot, the focus will be on optimizing traffic management, autonomous cards, industrial robotics, autonomous delivery, drones that respond to 911 calls, automated road and bridge inspection–all the things that a smart city would care about. 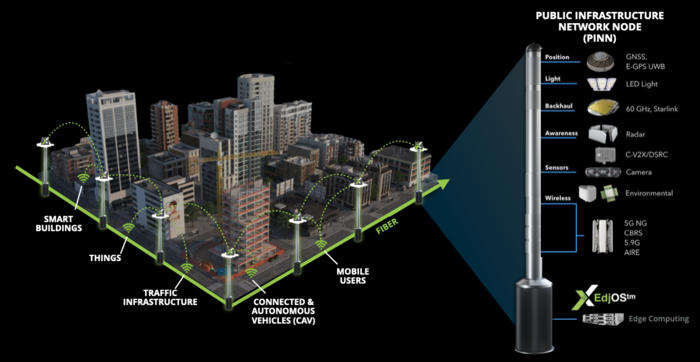 Above: The Autonomy Institute partnered with Atrius Industrise and EDJX for a pilot program to deliver autonomous solutions at the edge.

The first PINNS are scheduled to come online in the second quarter of 2021, and eventually have tens of thousands of PINNs deployed by mid-2022. Eventually, the goal is to expand the program from Austin to other major cities in the United States and around the world, EDJX said.

While the pilot program is specifically for building out city infrastructure, Thomason said that PINN and similar approaches will be important in other contexts, as well. As developers start developing for the platform, there will be opportunities to build applications for other industry sectors and use cases where data needs to be aggregated from multiple sources and fused together. Real-world edge applications on PINN can cover a whole range of things, including industrial IoT, artificial intelligence, augmented reality, and robotics.

“That general pattern of sensor data, fusion, and things happening in the real world is happening across industries,” Thomason said. “It’s not just smart cities and vehicles.”

For specific industries, there are different ways PINNs can be used. The energy sector needs to monitor the pipelines for natural gas and oil for signs of leaks–both from financial reasons and over environmental concerns. However, having enough sensors with sniffers to cover all the pipelines and wells could be too difficult. But setting up an infrared camera or a spectrometer to see the leaks and then raise the alert would prevent In another example, a factory may use cameras or other sensors to detect the presence of a worker inside the assembly line before starting the machinery.

“If you can use computing and sensors to do that, you can reduce workplace accidents, significantly,” Thomason said.

It is up to the developers that come to the platform what kind of applications they will build–the PINN had to exist first, said Jeffrey DeCoux, chairman of the Autonomy Institute. The pilot is an opportunity to explore and test out real-world solutions. PINN deployments will also encourage more work around sensors, 5G deployments, and all other technologies that depend on edge computing.

“Everybody came to the same realization, if we don’t do this, all of these industry 4.0 applications will never happen,” DeCoux said.