Cogniac, a San Jose, California-based startup developing computer vision tech for task automation, today announced that it raised $20 million in a series B1 financing round led by National Grid Partners with participation from National Grid, Autotech Ventures, Cisco Investments, Energy Innovation Capital, London Technology Club, Vanedge Capital, and Wing Venture Capital. CEO Chuck Myers says that the proceeds will be put toward the expansion of Cogniac’s workforce and the ramp-up of R&D efforts to support the company’s approach to computer vision, data storage, and “human-AI interactivity.”

Computer vision is a type of AI technology that allows machines to understand, categorize, and differentiate between images. Using photos from cameras and videos as well as deep learning components, computer vision can identify and classify objects and then react to what it “sees.” 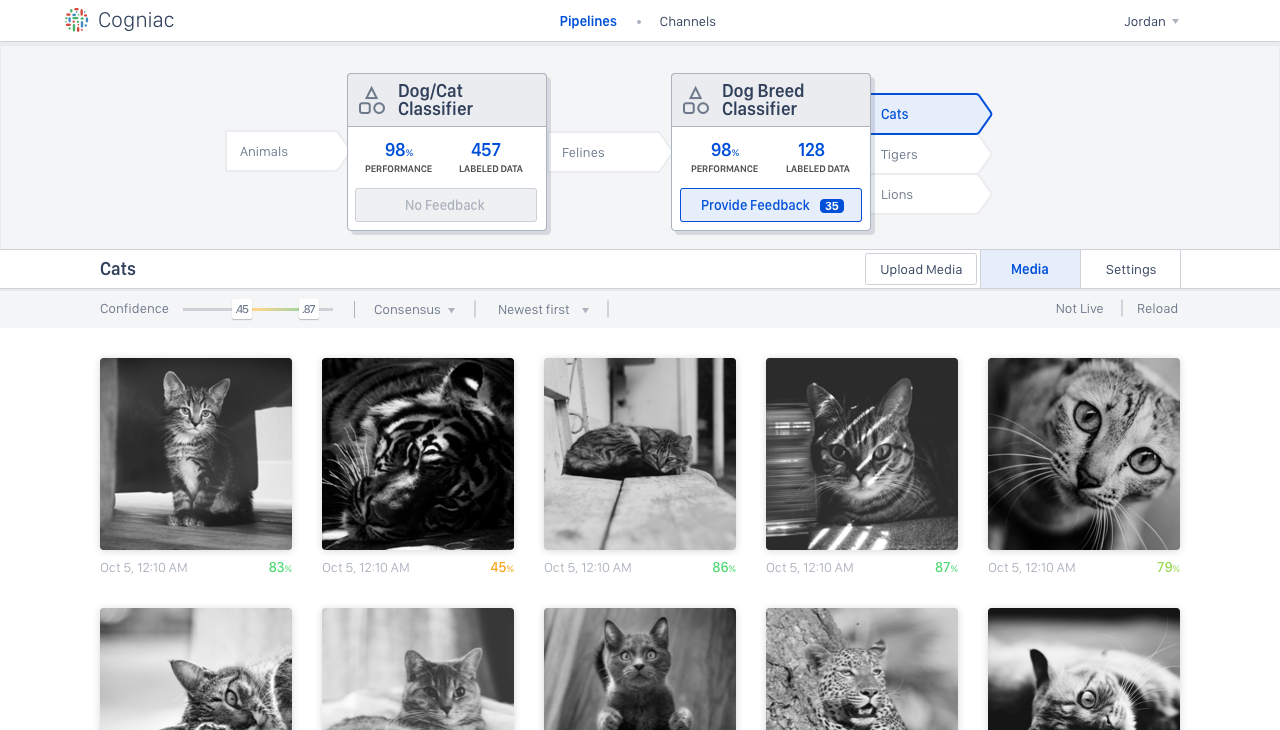 Cogniac’s AI platform has customers connect machine vision cameras, security cameras, drones, smartphones, and other sources and define objects and conditions of interest to them. They might specify surface damage and supply chain quality control inspections, for example, or accident prevention and real-time physical threat detection. Cogniac then monitors and improves classification, identification, counting, and measuring through a feedback system while integrating with third-party apps to deliver alerts and notifications.

Cogniac generates custom AI models for scenarios based on imagery and feedback. Once deployed, these models can learn new characteristics, adapting based either on archival imagery or data users enter. The platform monitors the confidence level of reach new prediction, prioritizing predictions with the lowest level for review while a core learning engine searches for configuration variations, ostensibly lessening the need for manual intervention.

Cogniac claims that with deep convolutional neural networks — types of AI models often applied to analyzing visual imagery — its system can achieve accuracy over 90% prior to human corrections. Moreover, the startup says the technology enables its platform to support multiple deployment environments, including cloud, gateway, on-premises, and hybrid.

Tasks in manufacturing, which is one of Cogniac’s key markets, can be error-prone when humans are in the loop. A study from Vanson Bourne found that 23% of all unplanned downtime in manufacturing is the result of human error, compared with rates as low as 9% in other segments. The $327.6 million Mars Climate Orbiter spacecraft was destroyed because of a failure to properly convert between units of measurement. And one pharma company reported a misunderstanding that resulted in an alert ticket being overridden, which cost four days on the production line at £200,000 ($253,946) per day.

And broadly speaking, computer vision can be used for nefarious purposes, like monitoring the responses of ride-hailing customers to in-car advertisements. This summer, AnyVision, a controversial Israeli facial recognition startup, raised $235 million in venture capital from SoftBank and Eldridge Industries. Public records and a 2019 version of its user guide show how invasive AnyVision’s software can be — one school using it saw that a student’s face was captured more than 1,000 times during the week.

Cogniac — a member of Nvidia’s Inception accelerator program, with partners including SAP and Rockwell Automation — has controversially provided its software to the U.S. Army to analyze battlefield drone data. The company has also participated in trials with U.S. Customs and Border Protection and helped an Arizona sheriff’s department to identify when people cross the U.S.-Mexico border — and expressed an openness to larger deployments down the line.

Of course, Cogniac isn’t alone in this — machine learning, computer vision, and facial recognition vendors including TrueFace, Clearview AI, TwoSense, and AI.Reverie also have contracts with various U.S. military and law enforcement branches. But according to Cogniac cofounder Bill Kish, government contracts are a small portion of the company’s business, which is primarily focused on industrial applications.

One Cogniac client is Georgia Pacific, which is finalizing the deployment of a solution that simplifies processes around the company’s mill operations. Another is Bobcat, which says it’s implementing Cogniac’s platform within the manufacturing warehouse kitting inspection workflows in warehouses across Otsego, Minnesota facilities. (Kitting refers to compiling products into a single “kit” that’s then shipped to a customer.) More recently, Cogniac announced a partnership with Trimac Transportation, a transportation service company based in North America, to deploy the startup’s technology throughout Trimac’s document identification and filing processes.

On the subject of bias that might arise in Cogniac’s models from imbalanced datasets, Kish says the company employs a process in which multiple people review uncertain data to establish a consensus. The company’s system acts as a source of record for managing assets, ensuring biases inherent in the visual data are spotlighted so they can be addressed through feedback.

“We’re at a key inflection point for AI vision adoption in the industrial and manufacturing sectors,” Myers said in a statement. “Our product’s efficacy and ease of implementation offer our customers significant and material improvement to their workstreams and processes. This funding allows us to scale our operations to meet the needs of this currently nascent but massively important and growing space. AI vision will serve as the foundation of safety and efficiency for the future of logistics and manufacturing, and we’re leading the creation of that infrastructure and operation standard.”

To date, Cogniac has raised over $30 million in venture capital.