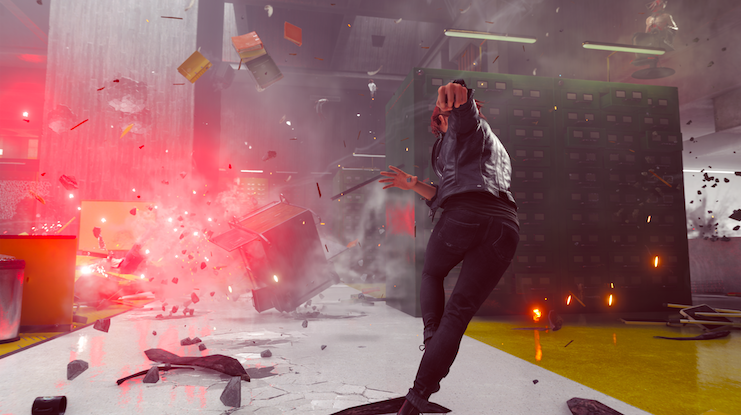 I start out by getting to grips with the levitation. Jesse can hover around to get the drop on enemies, angling herself to be in sight of key bits of architecture so she can turn them into projectiles. I summon my shield and the remains of a wall turn into a rubble asteroid field that deflects enemy attacks. I drop it to get a flank on one floating being, trapped in an armchair, and notice a rocket flying towards me.

I hold R1 to flip the switch and send it hurtling back towards the group of enemies in front of me, resulting in a gigantic explosion of debris. The physics in Control are an absolute spectacle, from bumping into filing cabinets to shooting through computer monitors with Jesse’s service weapon, assets burst into life and fill the screen with visual chaos.

Easily the most stunning visual effect is the gasoline-slick essence that bursts from enemies when you defeat them. Puha tells me this is actually a resource to collect and not just a fancy bit of flair. Whatever it is, it’s beautiful, and turns every combat frame into a vibrant painting.

FMV videos play in wall cutouts embedded in the architecture, and a scientist known as Casper Darling taunts Jesse with discussion of the Astral Plane, an unknowable iconic object and perhaps, a gateway to another world that appears in most of Control’s marketing.

Puha leads me through a section of the game where Jesse picks up an ‘Object of Power’, a hidden skill held inside a contained dimension, where the protagonist has to “prove herself” and bind with it to unlock it. The Hiss-corrupted workers at the FBC are stood eerily ogling it in reality. It turns out to be Seize, an ability that can turn enemies into friends.

This is especially useful when health-bolstering reflective orbs start appearing in combat and buffing my enemies. All I have to do is seize them and they’ll start bolstering my health instead. Some of these abilities are wrapped up in optional parts of the map that you’re going to have to seek out if you want to get the best experience out of Control. It’s not going to hold your hand.

Puha compares Control’s environment and map design to Dark Souls, and naturally, when the hands-off demo wraps up we’re right back where we started. During my playthrough, I stumbled into plenty of optional areas including a dank underground area overgrown with flora and plant monsters, a mirror maze and a desolate recording studio.

The mirror maze was particularly creepy, with shrill yelps of anguish taunting me as I tried to figure out a route through the puzzle. 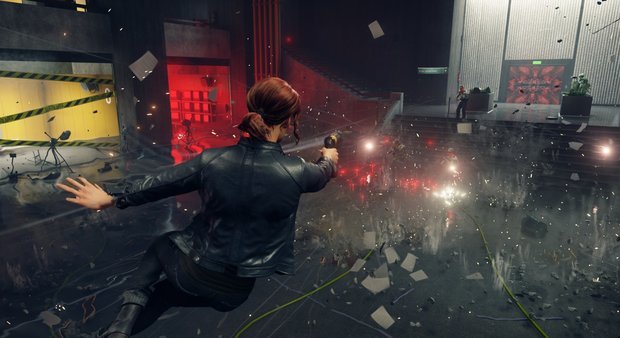 At certain intervals, the screen will be masked by a visual effect comparable to a close-up view of a bloodstream or on some occasions, a shadowy figure will dominate your eyeline, superimposed on the camera like the famous scene from the end of Twin Peaks: The Return. The difference is that in Control, you don’t live inside a dream, you live inside a nightmare.

I’m also introduced to a weapon and character mod system that can bolster Jesse’s suite of abilities and service weapon. The mods have rankings like ‘Exquisite’ or ‘Legendary’ which suggests that you can loot or craft them at some point in the game. I’m told about an executive hub that I was not shown during the demo where Jesse can craft and talk to people.

There are also Control Points (get it?) around the map which you can use to fast travel or upgrade abilities. Control is a linear story, but its exploration is strictly non-linear, and you can miss items, audio logs and documents if you’re not careful.

Later in the hands-off demo I’m shown a mini-boss section where Jesse has to contain a constantly morphing ferrofluid monster that is rattling around a small room, collecting debris. I found it endearing that the answer wasn’t just to fill it full of holes! In Control, there are monsters that are better off contained, like a vicious SCP. 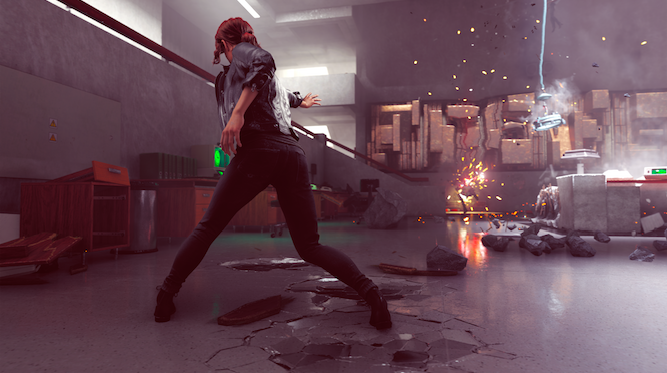 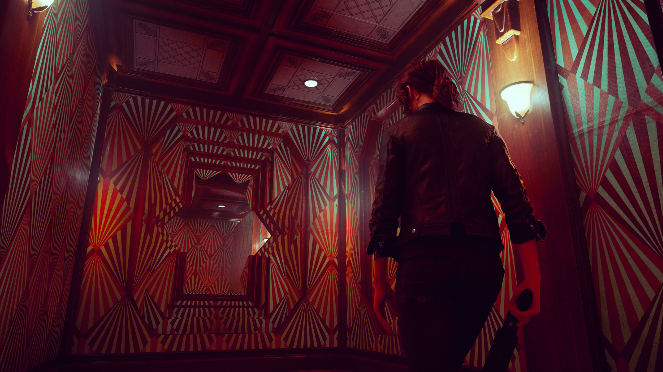 All of the equipment in the FBC is noticeably ancient to ensure it can’t be hacked. I’m shown an ASCII art puzzle on a tiny scanline screen that Puha solves with confidence, unlocking the route forward.

I’m told about large scale boss fights that take place in the adjacent dimension, the Astral Plane. Puha can’t show us any but assures us that they are quote “wild.”

The Control Points I mentioned earlier I’m told “hold the building together” and the further you delve into The Oldest House the more insecure it gets, with walls shifting and architecture turning on itself as you wrestle to reclaim your absurdist workplace. Puha mentions that there’s an endgame in Control too.

Once you’ve reclaimed The Oldest House, there’s still work to do to manage the Hiss. It’s good to hear that there are plans to prolong the playtime for players who push through the story, something that Puha warns against, noting that the game has an acute focus on exploration.

A prime example of this came at the end of my demo. I was told that there was a hidden area way up above the lobby. It’s not exactly clear that you can get up here, and is obviously intended to delight the more curious players. If you complete a set of precarious dodging hover-jumps, you can dip in and out of the brutalist architecture and scale the lobby to reach intriguing new areas with secrets and extra items.

I found a couple of character mods and a mysterious door overflowing with flora before I had to set the controller down and pull myself away. The platforming puzzles are a perfect fit for Control, and feel a bit like Crackdown’s hard but fair system for probing player exploration.

Overall, I came away from the session deeply impressed by what I’d seen. Every new area held a surprise, and the combat was deeply satisfying, a power trip unlike most other third-person action games. I’m saying all of this without knowing a lick about the deeply mysterious plot, which I imagine will be well under wraps until launch.

Jesse Faden is a unique supernatural superhero, and I can’t wait to get lost in The Oldest House when Control drops later this year on August 27th.