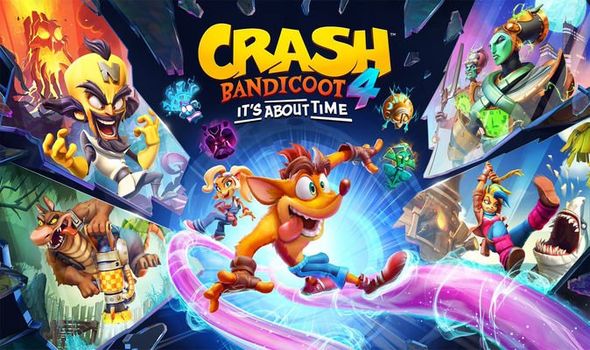 This week features a number of big game launches, including the arrival of the Crash Bandicoot 4: It’s About Time release date.

The good news is that the new Crash adventure will be available to play on PS4 and Xbox One this week, with other platforms a possibility in the future.

There’s been no word yet on a Nintendo Switch or PC port but it seems likely if things go well with the initial console release.

The game promises all the old-school action fans enjoyed from the N Sane Trilogy, with plenty of new features and gameplay promised.

A demo is already available to those gamers who have pre-ordered the game and a preload option is live on PS4 and Xbox One.

WHEN DOES CRASH BANDICOOT 4 COME OUT?

Activision has confirmed that the Crash Bandicoot 4: It’s About Time release date has been set for Friday, October 2, 2020.

For now, there has been no officials news on what time Crash 4 will be available to play on live servers.

The listing of Crash Bandicoot 4 on the Microsoft Store states that the game will be playable at 8pm in the United States, on October 1.

This would mean that the game will be available at 2am BST on October 2, 2020.

But as this time hasn’t been shared directly by Activision, we would suggest checking the digital storefronts from midnight on Friday.

More on this week’s Crash Banditcoot 4 launch can be found below, including details on the different modes and gameplay:

“At launch, there are three unique timelines to explore outside of our Bandicoot’s main journey.

“Two of them have already been revealed: the never-ending failures of Neo Cortex, and the heart-warming story of Dingodile’s reformation from a roast-happy villain to a short-order cook and diner owner.

“The last, but not least, of this timeline trio involves a familiar face from the first Crash Bandicoot game: Tawna Bandicoot.

“This is not the Tawna you remember, but that’s easy to say about someone from another dimension. In her universe, Tawna stars as a true hero in her own epic adventure, and she might be the key to helping Crash and Coco save the entire multiverse!

“Leap into action as Tawna in Crash 4 – swing across platforms with her trusty hook-shot, ascend to new heights with her acrobatic wall jump, and knock out enemies with her powerful ground-pounds and spin kicks.

“Alongside the Timeline levels, the bravest and highly skilled Bandicoots within Crash Bandicoot 4 will also be able to collect and play Flashback Tapes.

“These difficult experiences are only accessible by collecting VHS tapes in specific main levels, and only spawn if Crash or Coco reaches the tape’s location without dying once within that level.”

Crash Bandicoot 4: It’s About Time will be available to everyone on October 2, 2020, on PS4 and Xbox One consoles.