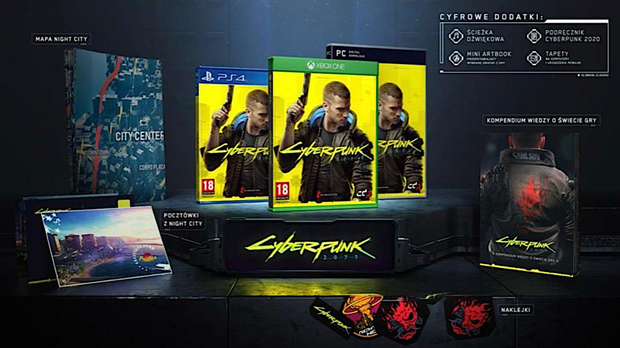 CD Projekt Red’s sci-fi follow-up to the Witcher 3: Wild Hunt may have a release year at last – with an image of the game’s collectors edition leaking just days prior to E3.

While the game is titled Cyberpunk 2077, fans thankfully won’t have to wait until then to actually play it. In fact, it looks like the game could be launching in 2020.

There are two reasons to suspect this, and the first is based on the pen and paper RPG that the game is based on which was titled Cyberpunk 2020.

The other indicator is the inclusion of something called a “Cyberpunk 2020 Manual” in the limited edition package, suggesting the dev is likely leaning into the pen and paper RPG’s lineage.

Of course, this is all guesswork, but we’d wager we’ll hear more about the project at E3 2019. Last year, Cyberpunk 2077 closed out Microsoft’s showcase.

The Witcher 3’s release date had been revealed at E3 2014, and while the game was delayed from February to May it did release the following year. Here’s hoping for the same again.

Electronic Arts has got plenty more to reveal later today. They’ll be kicking things off with a deep dive into Star Wars Jedi: Fallen Order before delving into Apex Legends Season 2, where we’ll probably learn more about some new legends coming to the game. After that, it’s time to go back in time for 30 minutes to take a look at the new content coming to Battlefield V.

After the spoils of war, you’ll want to lace up your boots for a full hour of sporting goodness, starting with the reveal for FIFA 20 and then followed by Madden NFL 20. We might see a few smaller reveals in between, for games like NBA Live and NHL 20, but these aren’t confirmed or guaranteed to happen.

EA Play will supposedly finish on some big new news for The Sims 4, but to be honest we wouldn’t be surprised to see a few more games pop up throughout the show. a new Plants Vs Zombies, Command and Conquer Remastered and finally plenty of indie games like Sea of Solitude could all make a sneaky appearance too.

Make sure you follow our liveblog and individual pages for regular updates throughout the day.