Riding on his blue Wyvern and wearing full armor, the Nameless King is one of the side bosses in Dark Souls 3, facing you after you summon him. After the summoning bell is rung, most of the area is covered with a thick fog, making some small areas and items inaccessible to reach until you defeat the rumored Lord Gwyn's son.

While other bosses such as Ornstein also have similar movesets and employ a spear, it is strongly suggested that the Nameless King was once Ornstein's master, making him excel above everyone else using the same weapon. Here is all you need to know about him. 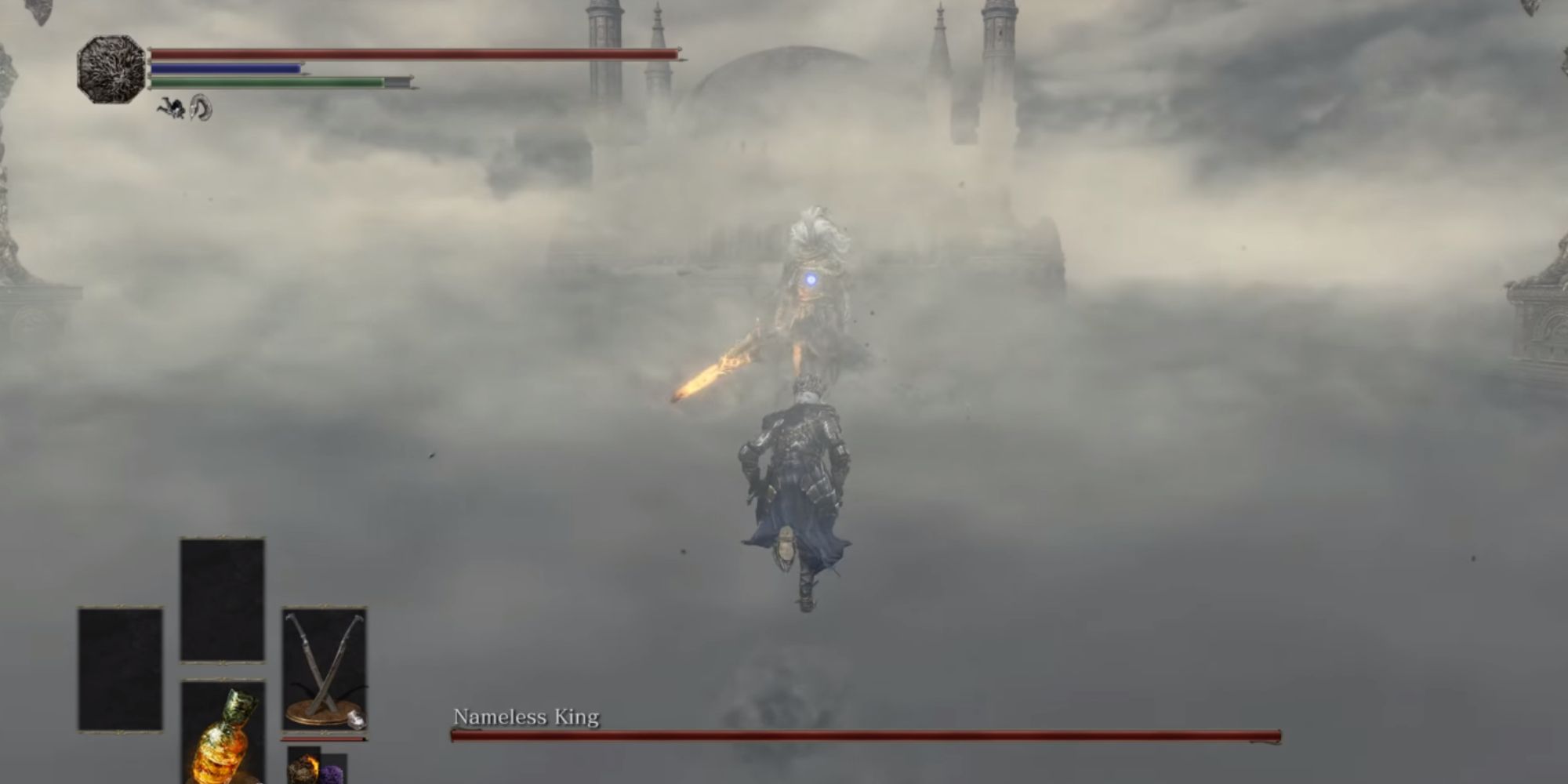 Nameless King is located in Archdragon Peak. The fight is optional, meaning that you do not have to face him to achieve any ending. The boss fight can be accessed by ringing a bell, which will play a cutscene showing fog cover over the area. There are no summonable NPCs for this fight; however, you can summon White Phantoms to help you throughout the fight.

Defeating him will get you 80,000 Souls and the Soul of the Nameless King. You can transpose the Soul at Firelink Shrine and choose to get Storm Curved Sword (Weapon), Dragonslayer Swordspear (Weapon), or Lightning Storm (Miracle). You can pick the Dragonslayer Set (Ornstein) from the arena after the fight is over. 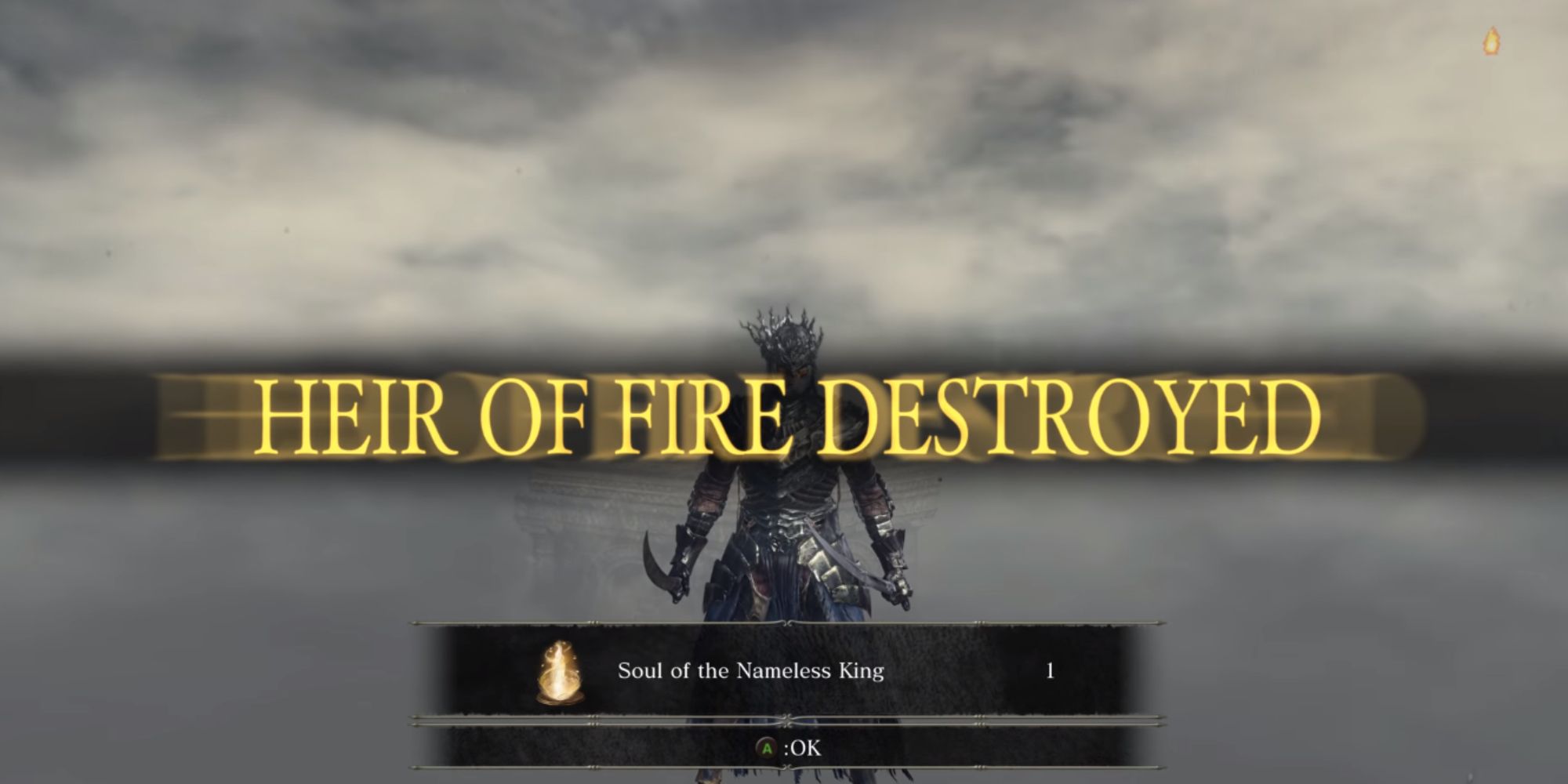 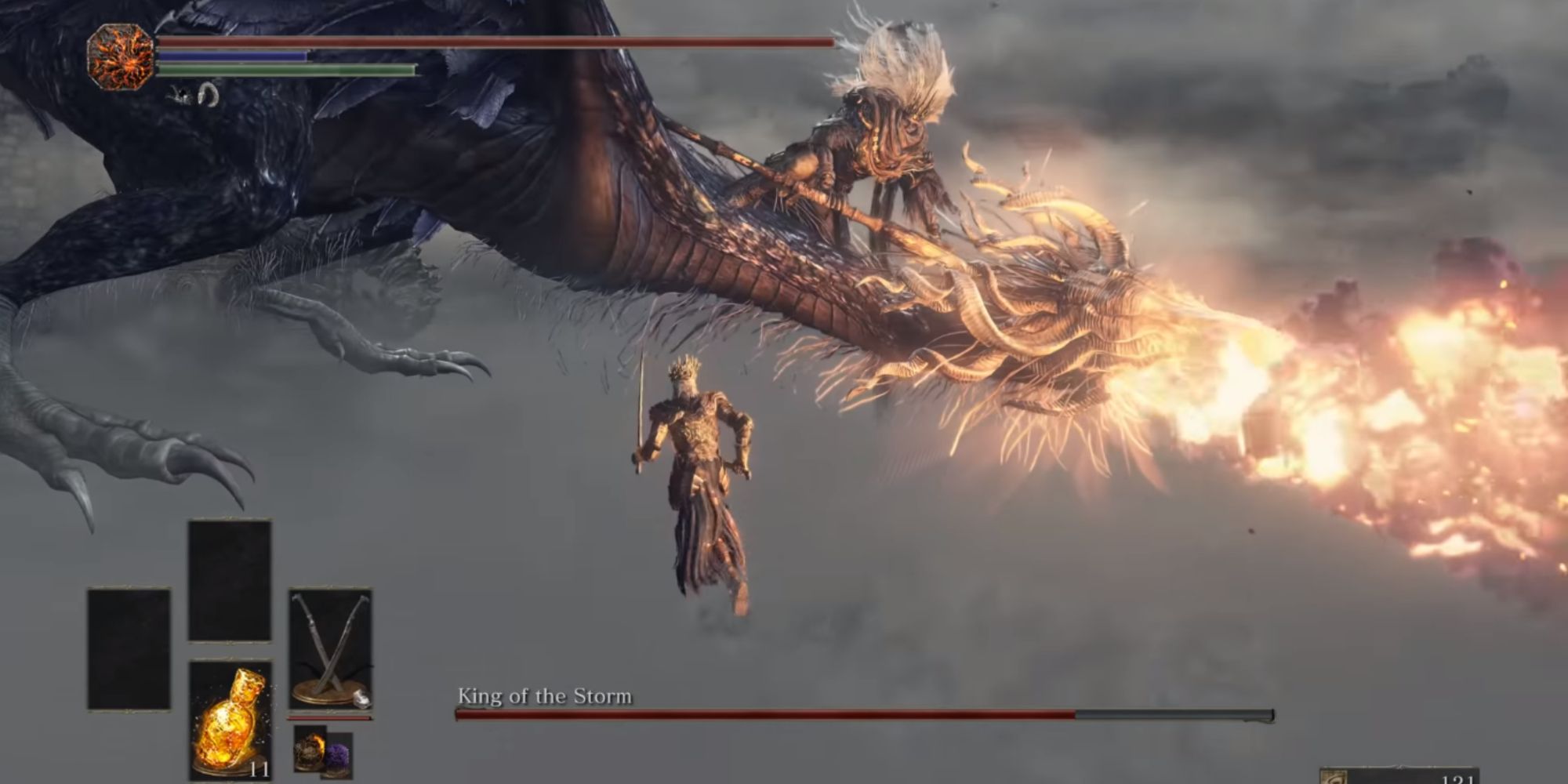 The Wyvern tilts its head to the left side and starts to breathe fire around it.

He raises his spear and slams it down on the ground to cause a lightning explosion.

The Wyvern flies up in the sky and starts to breathe fire down on the ground in a large area. The attack has good tracking so being far away is beneficial.

The Wyvern flies up in the sky and starts to circulate several times. During this is happening, the Nameless King tries to hit you with Lightning Strikes. He then finishes off the attack with a Lightning Stab.

The Wyvern causes an air wave, making the player take little damage and possibly knock them over. 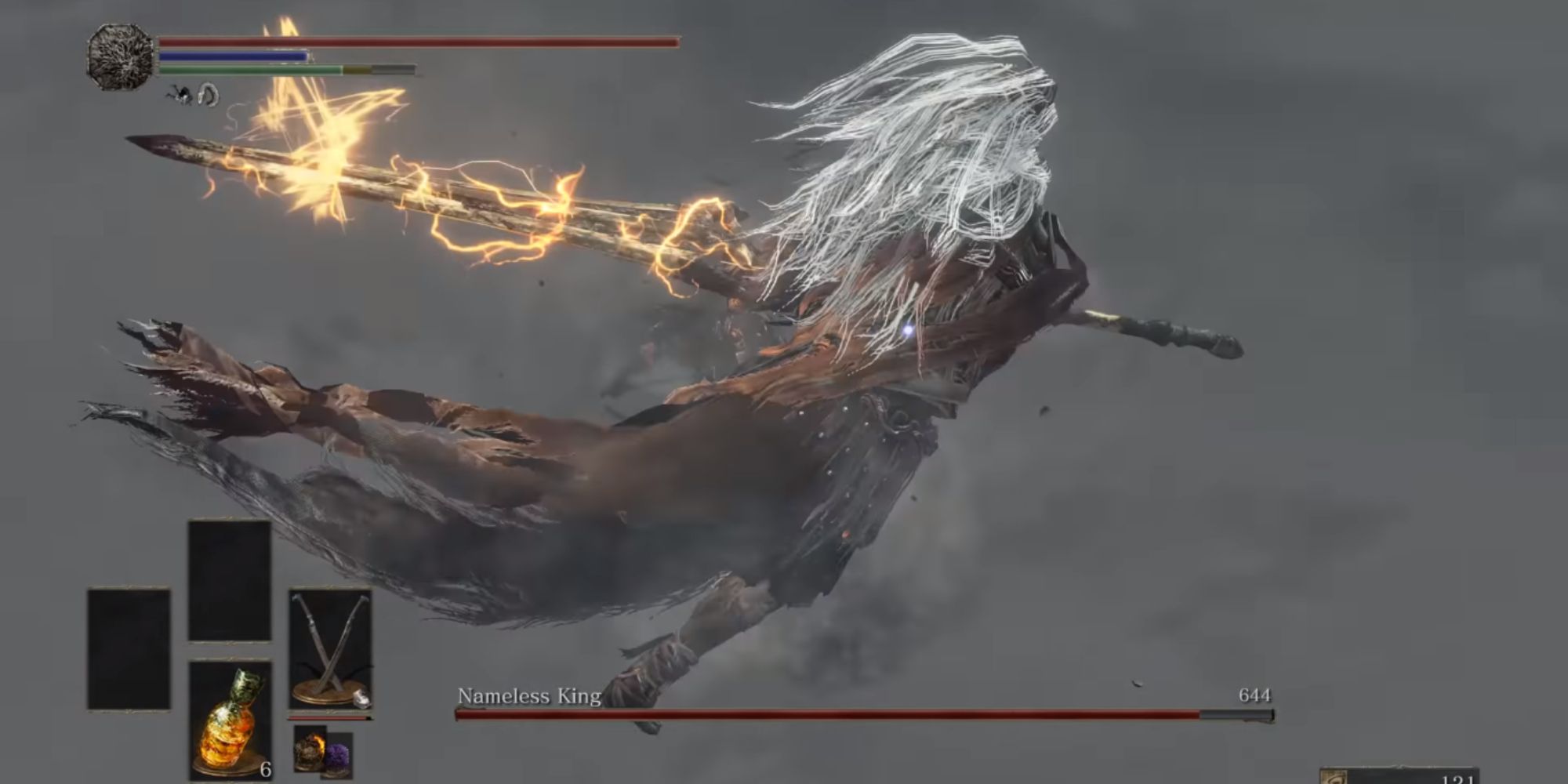 The boss sweeps his weapon in a horizontal strike which causes a shockwave that expands.

He slams his weapon into the ground to cause a shockwave that expands.

He rushes towards the player, rotates, and follows up with a hit with his weapon.

He uses his spear to attack the player multiple times. His strikes go from one side to the other.

He takes out his weapon and raises it slowly towards the sky. After a second lightning strike occurs at the player's location.

He strikes the ground using his sunlight spear. This causes lightning to come out from that location.

Nameless King uses his Swordspear to stab the player. If successful, he will raise the player up, and a lightning strike will hit them.

The boss raises his weapon and then starts to charge at the player two to three times. Dodging to this side or blocking this attack is not recommended. However, rolling through the charges is a good way to avoid them. 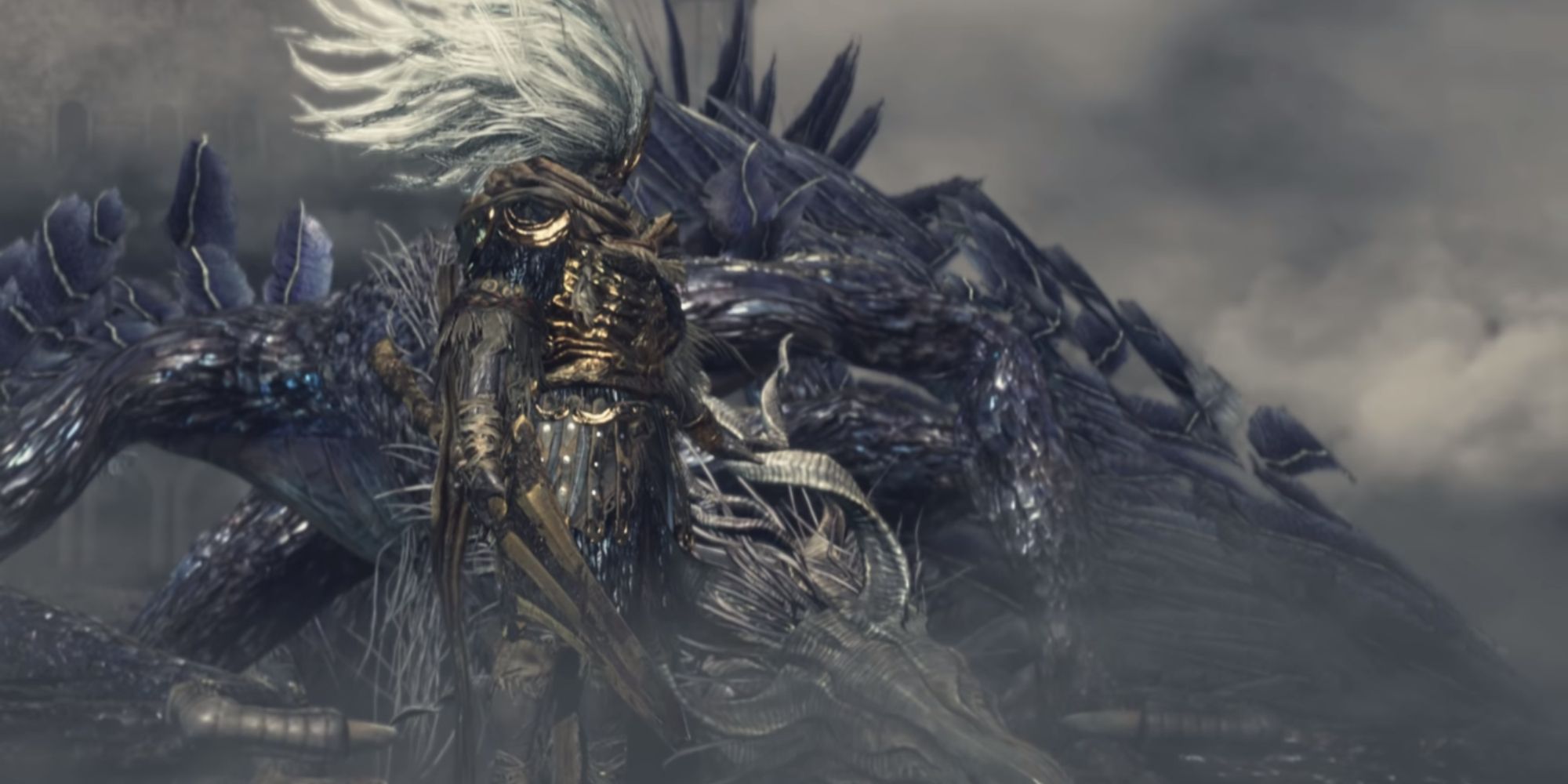 Nameless King is one of the hardest fights in the game, especially in the second phase of the fight. He deals a lot of Lightning damage. Because of this, it is recommended that you wear armor that has the highest resistance to Lightning damage. Thunder Stoneplate Ring is also an extremely useful ring for this entire fight.

As you enter through the fog gate, the boss will fly down riding his Wyvern. The first phase of the fight is titled "King of the Storm." In this phase, the boss will stay on the Wyvern and will try to attack you with his spear from time to time. The Wyvern, on the other hand, will try to breathe fire and bite you when it gets the chance.

There are two attacks where the Wyvern flies up in the sky. This can be followed up by Aerial Fire Breath, where the Wyvern will breathe fire ahead of it. The dragon can also fly in a circle in the sky while the Nameless King shoots Lightning Arrows at you. These can be avoided by dodging to the sides when the arrows are about to hit you. A good time to attack is when the Wyvern is breathing fire on the ground. Its head takes a lot of damage, allowing you to run towards it and get multiple hits in. 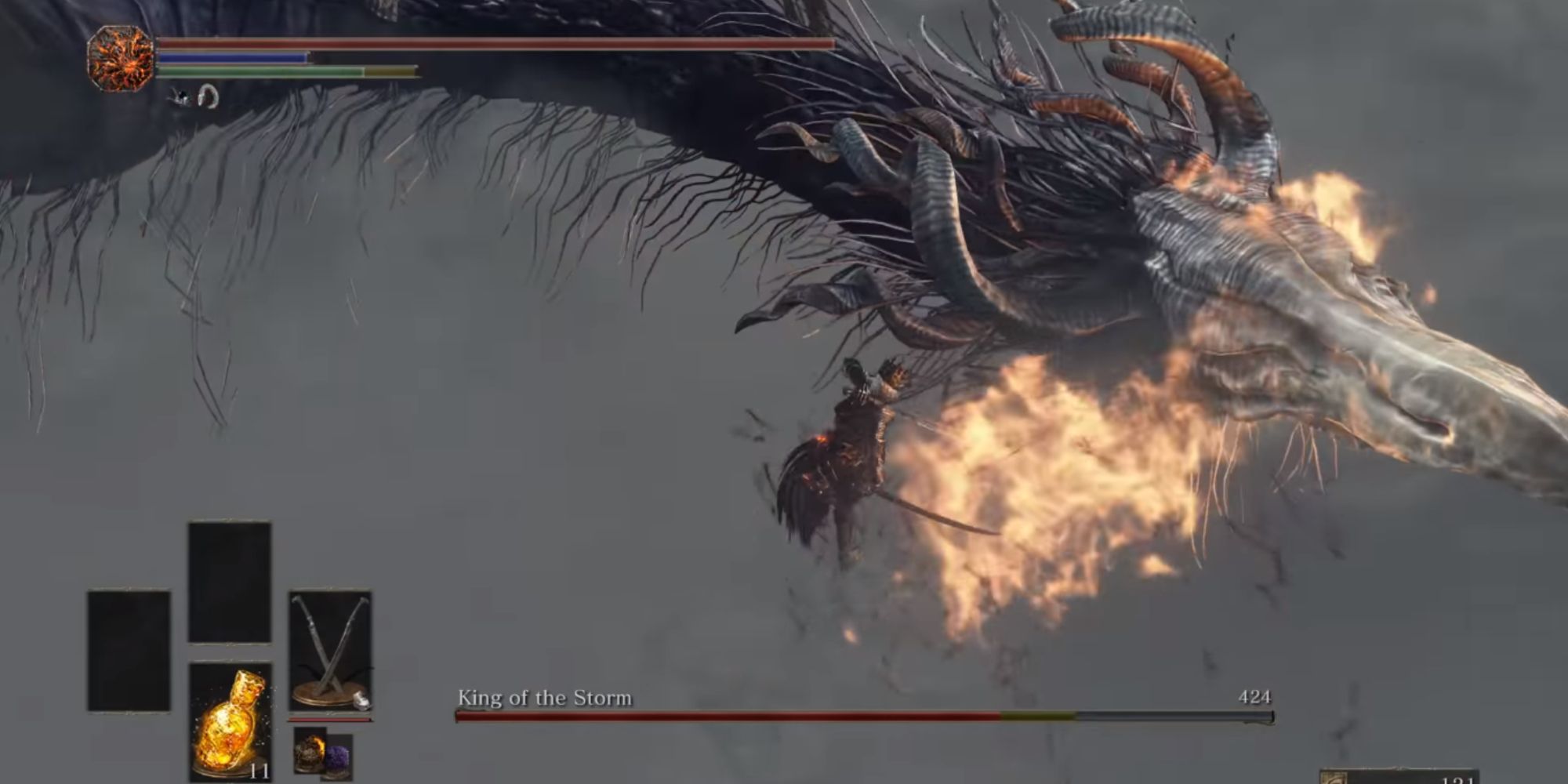 During the first phase, you will have to keep your eyes on the King as well as the Wyvern, as both of them can perform different attacks. As the Wyvern flies around quite a lot, this can cause your camera lock to go out of control. Because of this, Lock-on is not recommended for this fight. However, you must at all times have your eyes on the boss regardless of what it is doing.

Camping below the boss to attack its feet is not a reliable strategy as the Wyvern will try to stomp you. It will also fly away and could breathe fire on top of you.

In the second phase, you will face the Nameless King. His attacks are difficult to figure out as he is quite aggressive, but his attacks are sometimes delayed making you dodge a second before the attack hits you. He also has high damage output and can take you out in two hits. The boss is aggressive most of the fight, and you will not get time to heal constantly. Try to limit the use of Estus Flasks in the first phase, as you will need a lot in the second phase.

The fight is easy for Sorcerers because the Wyvern is weak against Magic damage making the first phase very easy. Nameless King himself takes normal damage from Magic, making it useful in the second phase as well. You can summon a melee class player who can aggro the boss while you cast constant spells.

If you are fighting the boss as a melee character, you can act as lightning and a physical tank to take less damage. Sticking to the right side and dodging his attacks will give you plenty of time to get counter hits in before he performs the next attack.

Some attacks the boss has creates air shockwaves. They move slowly and can be blocked. Rolling backward for these is not recommended because of how slow the wind moves towards you. Most of the attacks have lightning AOE, which spread out quite a lot. These are difficult to dodge as you need to roll in between the strands that come out.