Just because a quest is a little older, doesn’t mean it isn’t worth doing in Destiny 2, and the Make Bows Not War exotic quest has quite the reward waiting at the end of it. While it may not be on the level of complexity as some of the higher level activities in the game, such as the notoriously cryptic and deadly raids, this quest does pose its own challenges that can stump more than a few players. If you’re having trouble solving everything this quest entails, including how to get into Banshee’s Workshop, our guide will be your waypoint.

Destiny 2 – How To Start Make Bows Not War

Getting this quest started is, as you would hope, the least painful part of the entire quest. You’ll start off by going to the tower and speaking to Banshee-44 the gunsmith. He’ll give you the Make Bows, Not War quest, with the first step being to find his hidden workshop.

Make Bows Not War – How To Get Into Banshee’s Workshop

Right off the bat, this quest poses a tough challenge. Not only is Banshee’s workshop hard to find, but actually reaching it requires a bit of platforming skills too. From the starting point in the Hangar, turn left and go up a set of stairs onto the catwalk above where you met Xur. Follow the path around the pillar until you’re running back in the same direction you entered from, and look for another disconnected platform you can jump to along the wall. 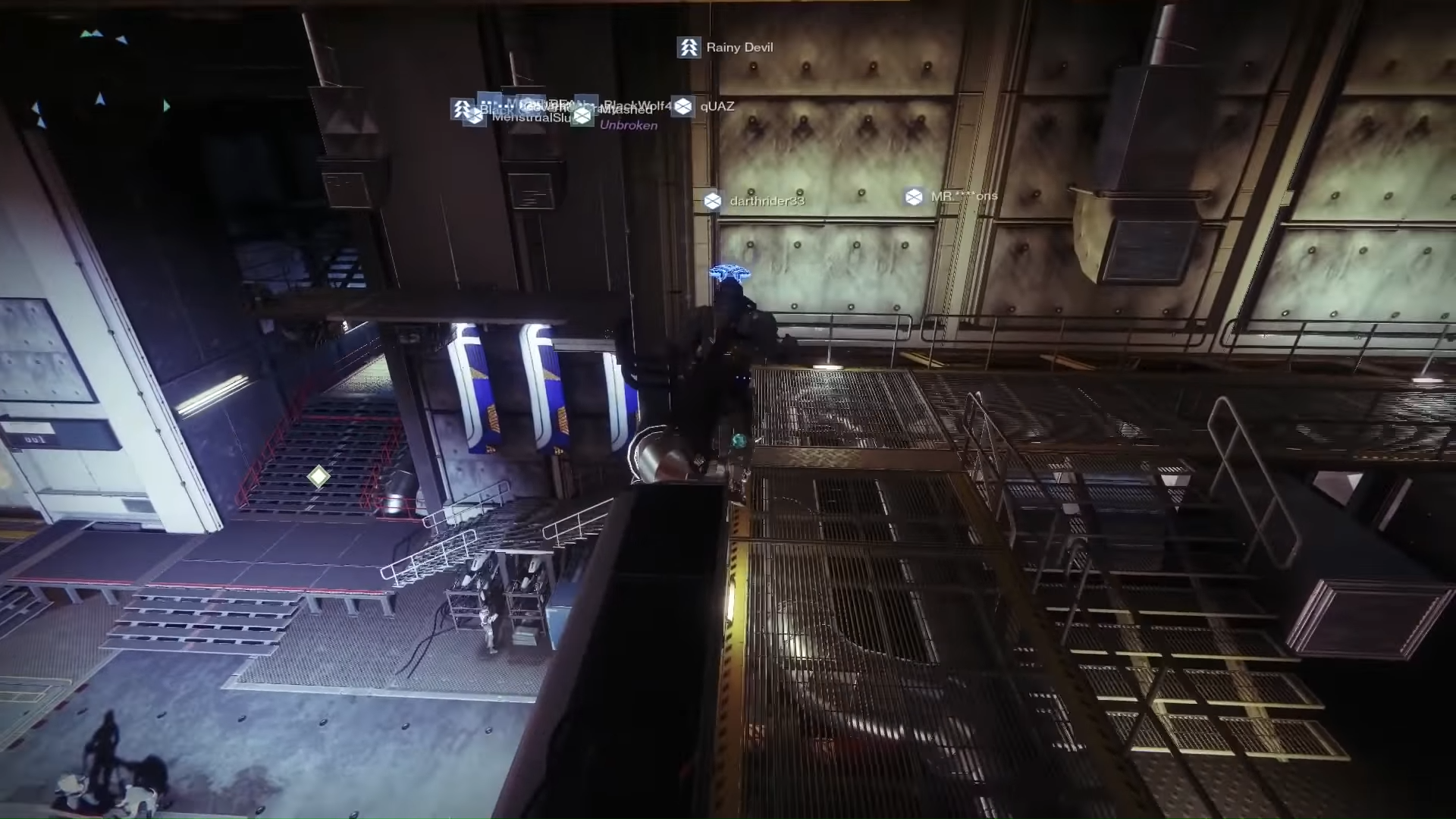 Jump across, head up some stairs, and enter an open circular vent on the right. Exit the far end of the vent and take the door directly to the left of where you exited. Drop down another vent in the floor, move forward, and hop back up into the adjacent room. Take the door out and go into the room full of storage shelves. Look for the one near the back with an open vent above it and climb up inside. From there, it will be a linear path all the way into Banshee’s workshop. Interact with the locker against the wall to update your quest.

Now that you’ve actually found Banshee’s workshop, you just need the keys to open the display case. If you’re wondering why he didn’t mention that before sending you off to find it first, you’ll be glad to hear your next objective is to go back and complain to Banshee. But, because nothing in Destiny 2 comes so easily, he’ll give you a series of steps you need to complete before you can crack open that case. 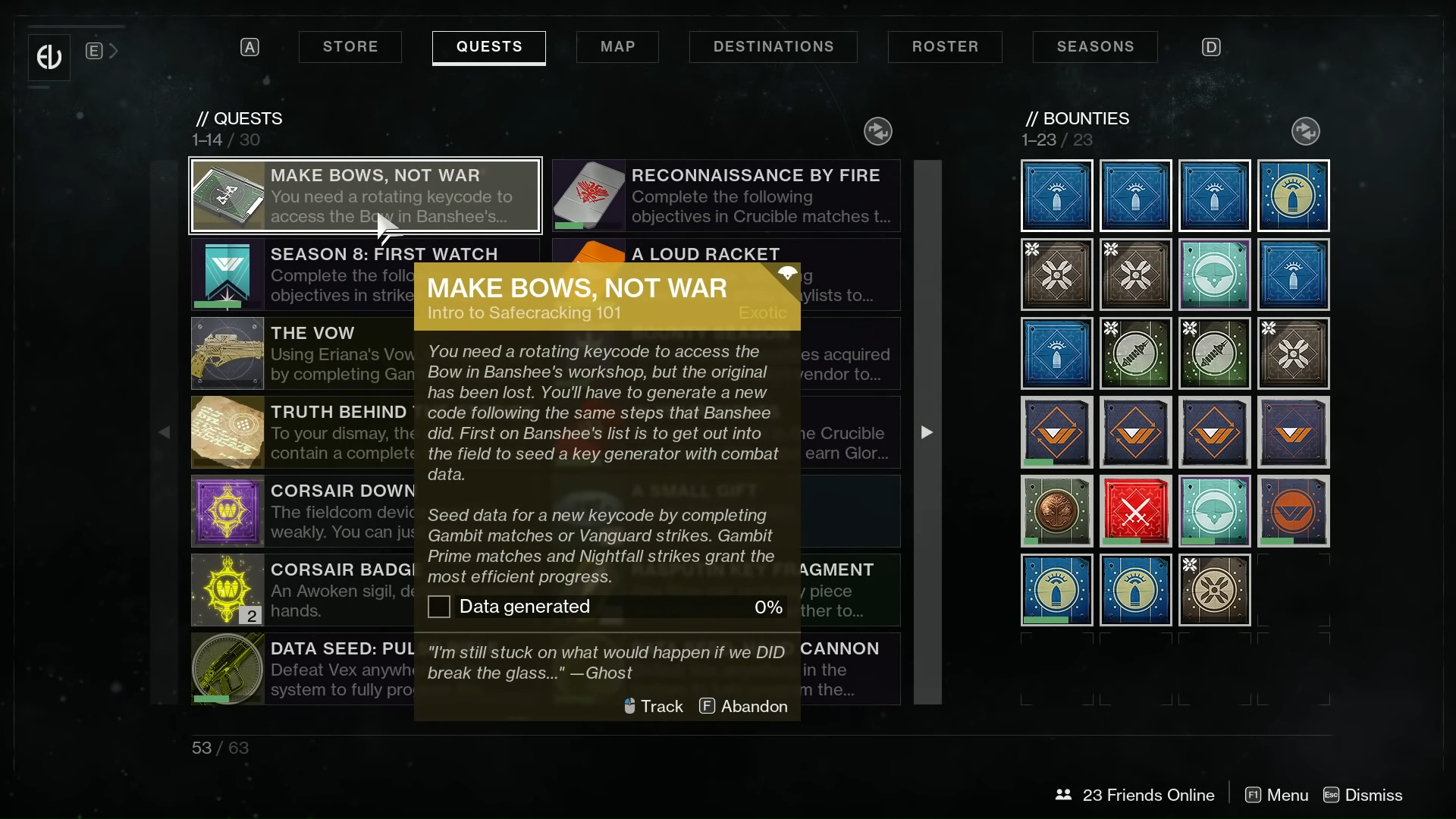 Banshee will explain that he’s lost the original key and it is up to you to generate a new keycode by completing Gambit matches or Vanguard Strikes, with Gambit Prime matches and Nightfall strikes being the most efficient. Each completed strike will give you 20% progress, so you will need to complete at least five of them to generate enough energy, but a single Nightfall strike will generate 50%. Gambit Prime matches only grant 35%, and will cost you 25% if you lose, so don’t bother taking that risk.

I hope you enjoyed generating data, because you’ll need to do it again for this next step in the quest. This time you will have to get precision final blows against Vex or Cabal using a bow. You’ll know you’ve gotten a precision final blow by the yellow damage numbers that pop up when you land your shot.

As for farming these kills, you could do the Vex Offensive or go into the Leviathan Raid by yourself. The first area you enter in the raid, as long as you don’t progress, will endlessly spawn Cabal for you to snipe with your bow. Just camp here and grind out the hundred or so blows you need.

Just a bit more data, we promise. This time you’ll generate it by completing the epic reprise of The Arms Dealer strike in the European Dead Zone. Head over and make sure you select the arms dealer strike with a recommended power of 900. This will have three modifiers to take note of. First is Harsh Elements, which increases damage from Arc, Solar, and Void sources. Blackout makes enemy melee attacks stronger, plus disables your radar, and Iron increases enemy health and prevents them from being staggered. 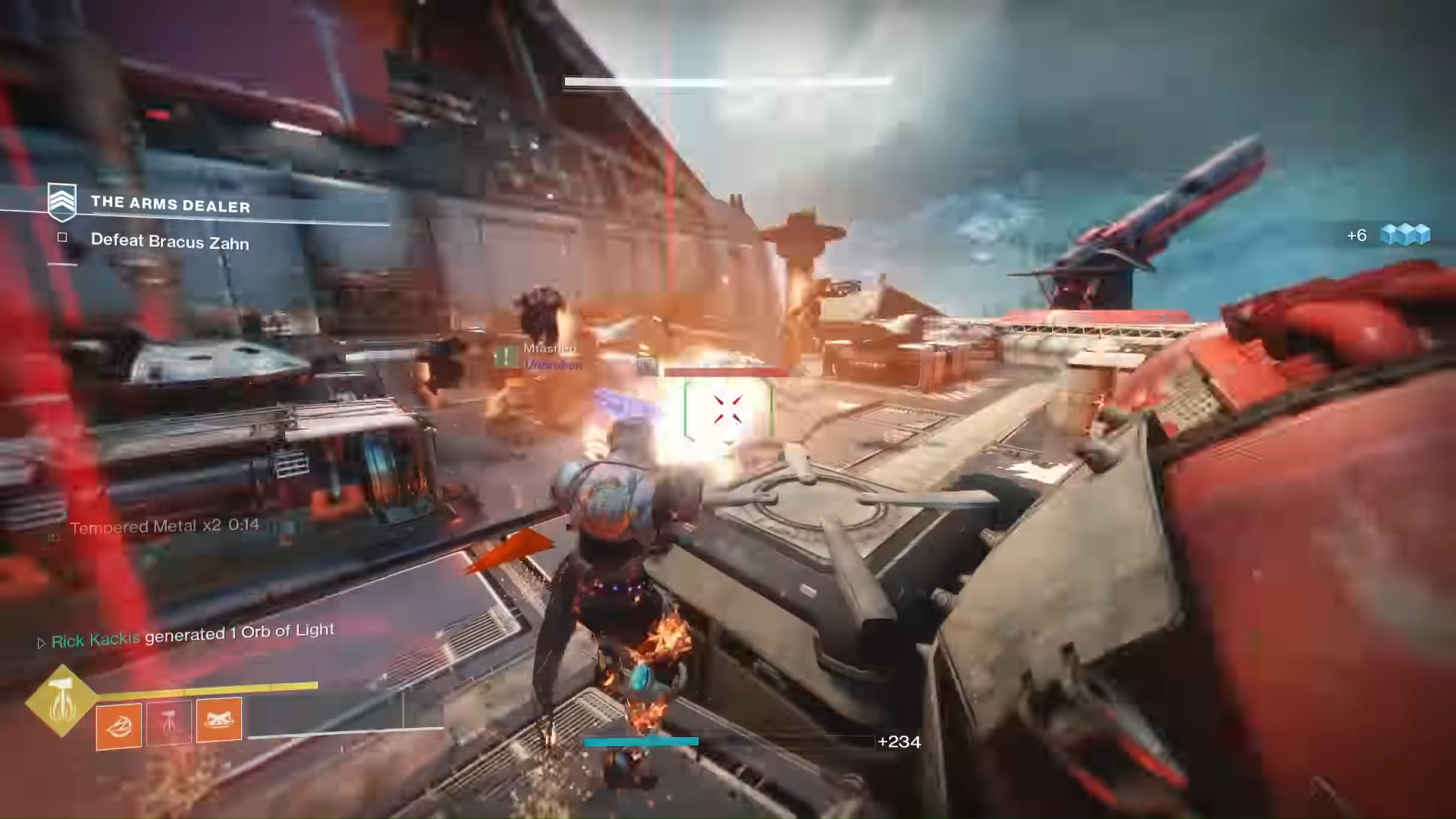 The strike is mostly the same as you remember, but with a few tweaks to keep you on your toes. Aside from a few tougher enemy spawns, the boss, Bracus Zahn, is notably more tanky than before. Also, rather than missiles only coming down while he’s jumped away and is immune to damage, they will constantly be raining down the entire fight. You’re going to have to keep extremely mobile while trying to blast down his health as fast as possible.

Finally, you have enough data and can return to Banshee in the Tower, confirm you have everything you need, then go back to get your bow. 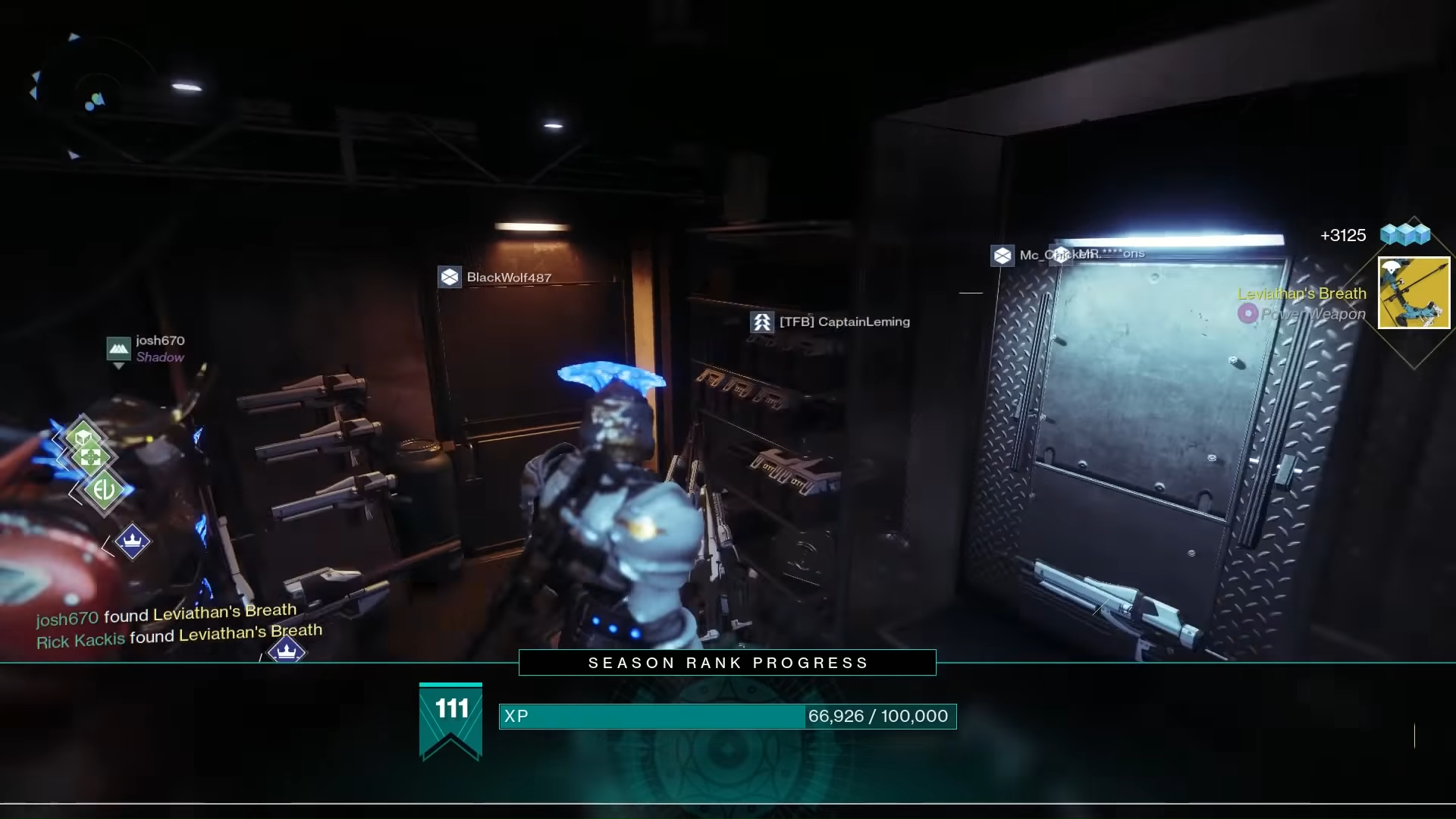 Platform your way back to Banshee’s workshop, pop open the case, and you will have your brand new Leviathan’s Breath exotic bow. The main draw (pun intended) of this bow is the intrinsic ability Big-Game Hunter, which fires a huge arrow that will stagger any unshielded enemy it hits, and is especially effective against Unstoppable Champions.

Next: Destiny 2 Is Getting Another New Player Revamp Coming In Beyond Light 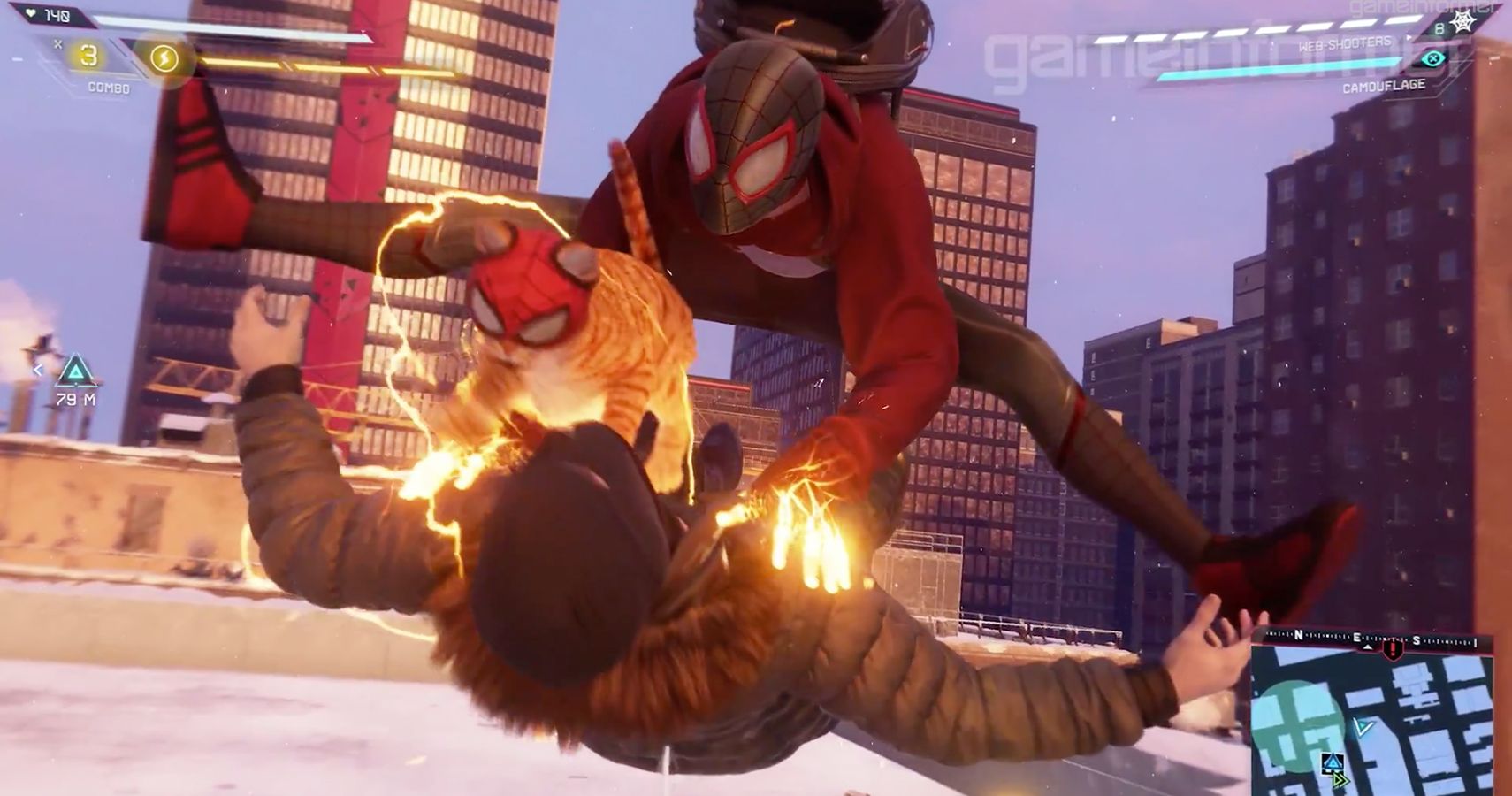