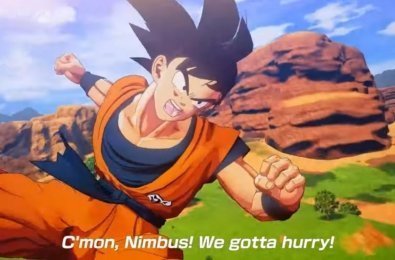 Since being announced as Dragon Ball Project Z a few months ago, we finally saw the latest videogame based on the anime phenomenon on Microsoft’s E3 stage.

Now known as Dragon Ball Z Kakarot, the title is an action-RPG which looks to put players in Goku’s shoes as he fights through some of the most epic battles in the franchise’s storied history.

The trailer below shows some gameplay, and also a glimpse at Vegeta, Nappa, and Frieza. The name “Kakarot” is actually Goku’s Saiyan name, so it looks like he’ll be the only playable character (unlike the Xenoverse franchise which involves time-travelling custom characters).

Count us in for a good ol’ punchup when Dragon Ball Kakarot spirit bombs its way onto consoles in early 2020. Here’s hoping it’s received as well as the excellent Dragon Ball Fighterz.

• EA Play – Catch up with every EA Play trailer and announcement you missed here.

• Microsoft Xbox – Catch up with every Xbox E3 Conference trailer and announcement you missed here.