As one of the most archetypical tabletop RPGs of all time, Dungeons & Dragons is a game synonymous with the fantasy genre itself, containing a vast array of iconic races and monsters. Of the races in Dungeons & Dragons, few are as deeply rooted in the game as elves.

While elves have long been a mainstay of the fantasy genre, D&D is home to several diverse types of elves that are notably distinct from those of Tolkien. As elves are such an integral facet of D&D, we're going to explore the various types of elves, their lore, and what makes them mechanically distinct. 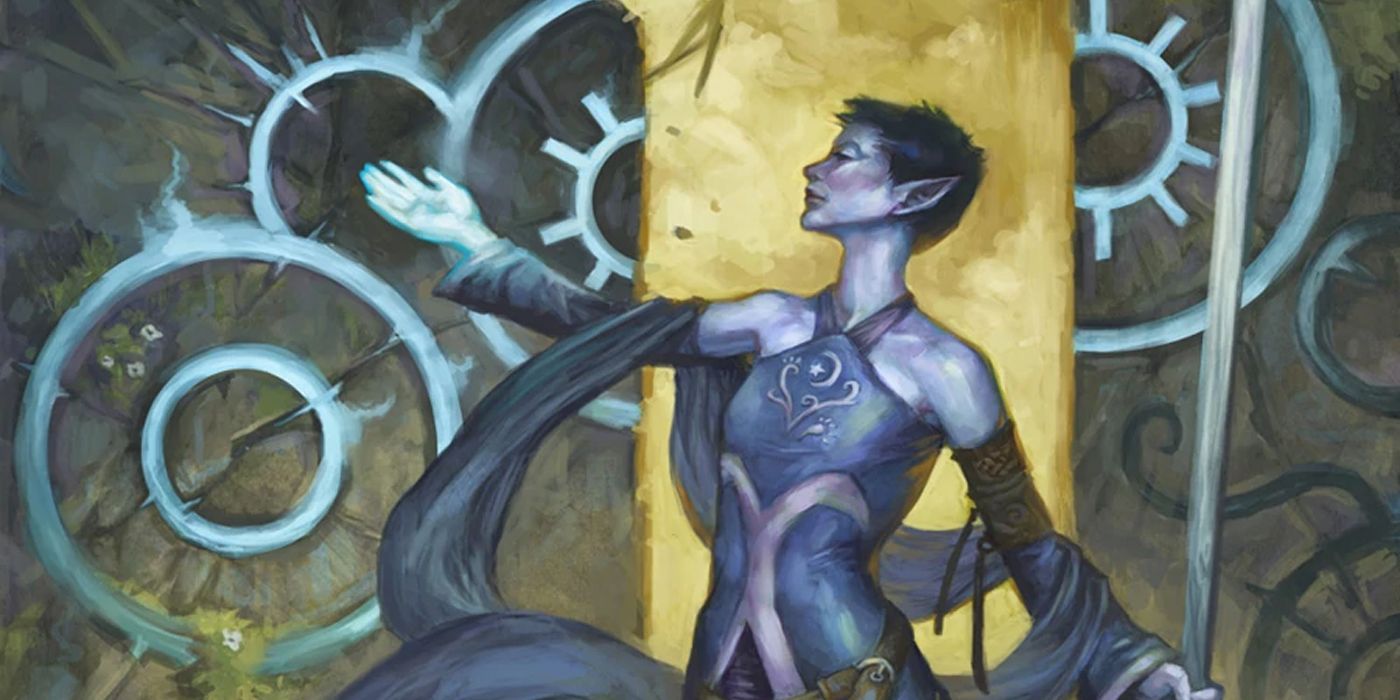 Within the context of gameplay, the intellect and magic proficiency of high elves are presented through an automatically known Wizard cantrip and access to a third known language, in addition to common and Elvish. 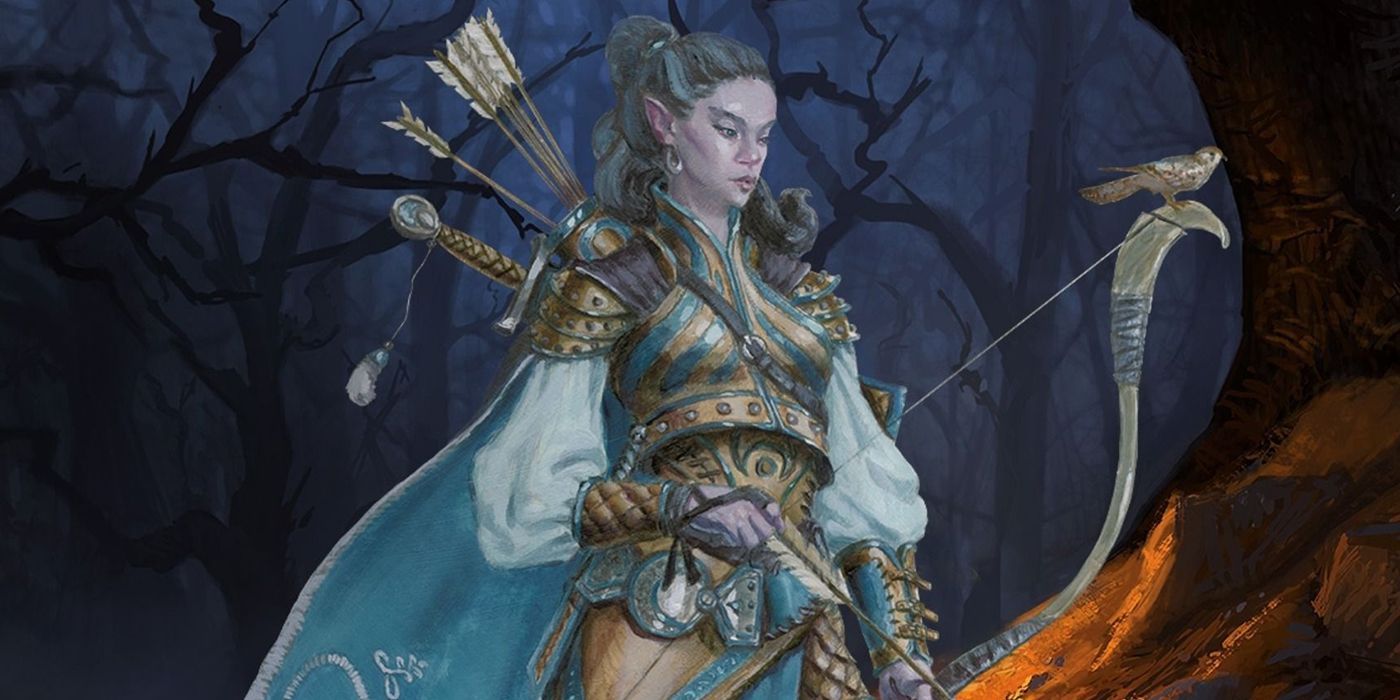 Also known as copper elves, this is another classic type of elf found within the Player's Handbook. As their name would suggest, wood elves are native to forests and are known for their instincts and intuition. Unlike some high elves, many wood elves tend to be rather reclusive, being warry of races other than elves.

As a race native to forests, these creatures are known for their deft speed and their ability to blend in with the wilderness, utilizing natural camouflage. These traits are seen within the mechanics of this race as wood elves tote an above-average 35-foot movement speed, and the ability to more easily hide within nature and naturally occurring weather effects like rain and mist. 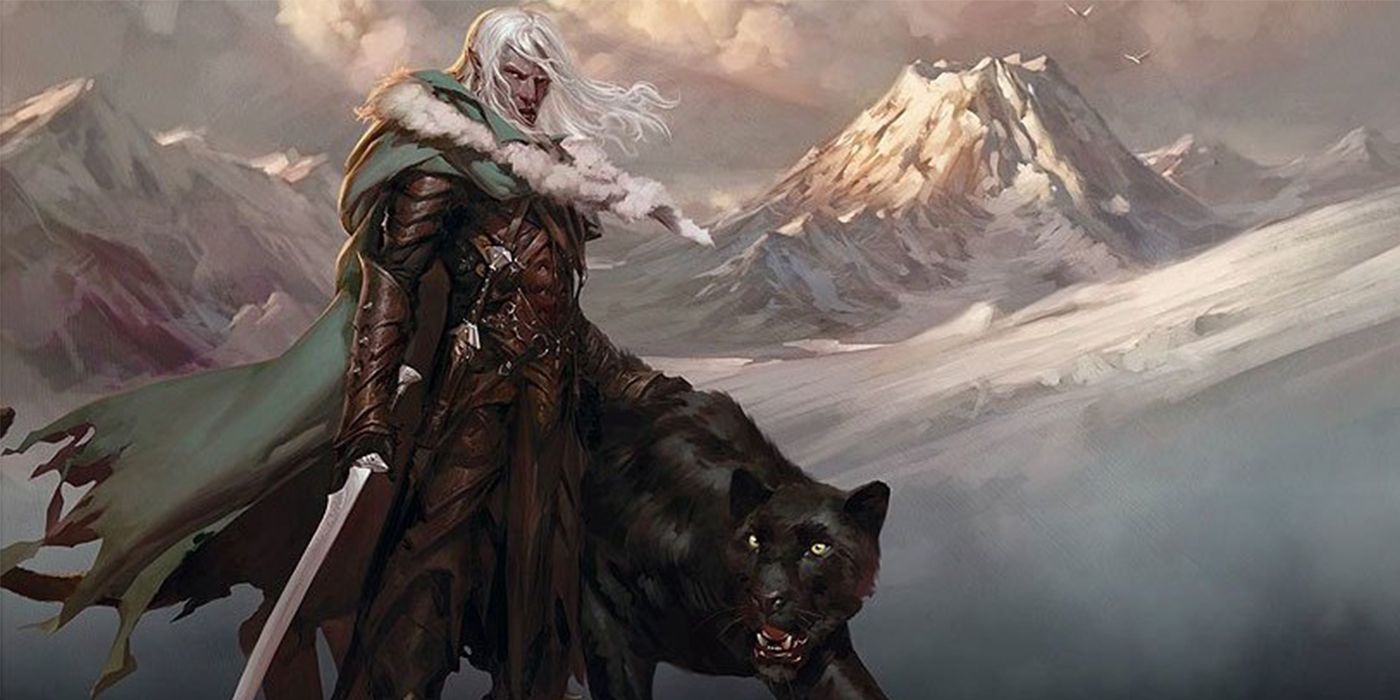 Descendants of Lolth, the goddess of spiders, the dark elves (also known as Drow) are a race of people that traditionally live underground, deep within the Underdark. From the teachings of Lolth, the traditional Drow society is matriarchal, made up of high houses that ruthlessly attempt to climb the hierarchy at any cost.

For much of D&D's history, the Drow have been viewed as an antagonistic force featured within the Monster Manual and Monsters of the Multiverse alike. However, there are also many good-aligned drow such as the iconic ranger, Drizzt Do'Urden, as well as those that leave the Underdark to follow the teachings of the goddess Eilistraee.

Mechanically, the race notably has superior darkvision at the cost of sunlight sensitivity as well as the ability to cast useful spells like Faerie Fire and Darkness. 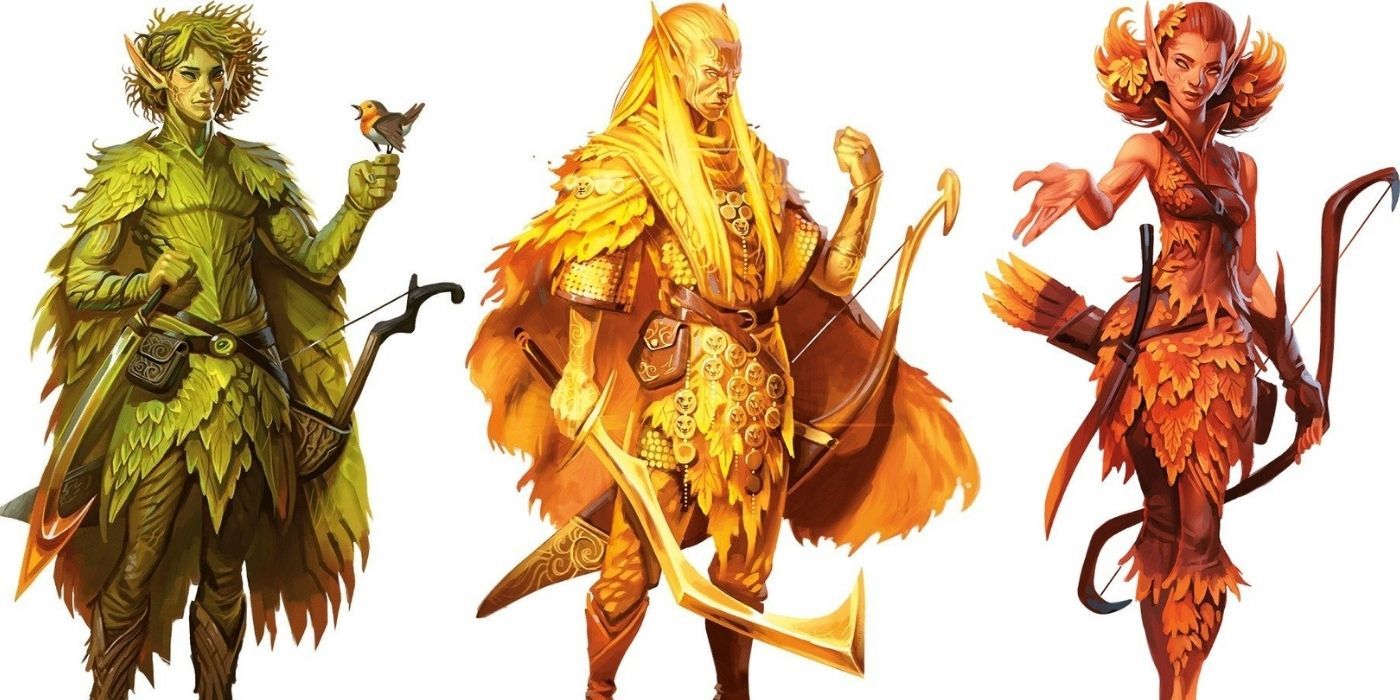 One of the most noteworthy factors about the Eladrin is the manner in which their emotional states are directly connected to the seasons. As seasons change, so does an Eladrin's appearance and demeanor, taking on characteristics reflective of a given season. For example, while an Eladrin within their Winter form may be cold and reserved, the very same Eladrin may be notably jubilant and expressive in their Spring form.

All of these features have an impact on the game, of course. Mechanically, these elves have access to a stellar teleportation ability known as Fey Step, providing different benefits based on the Eladrin's current form. Additionally, whenever an Eladrin concludes a long rest, they are capable of changing their seasonal form. 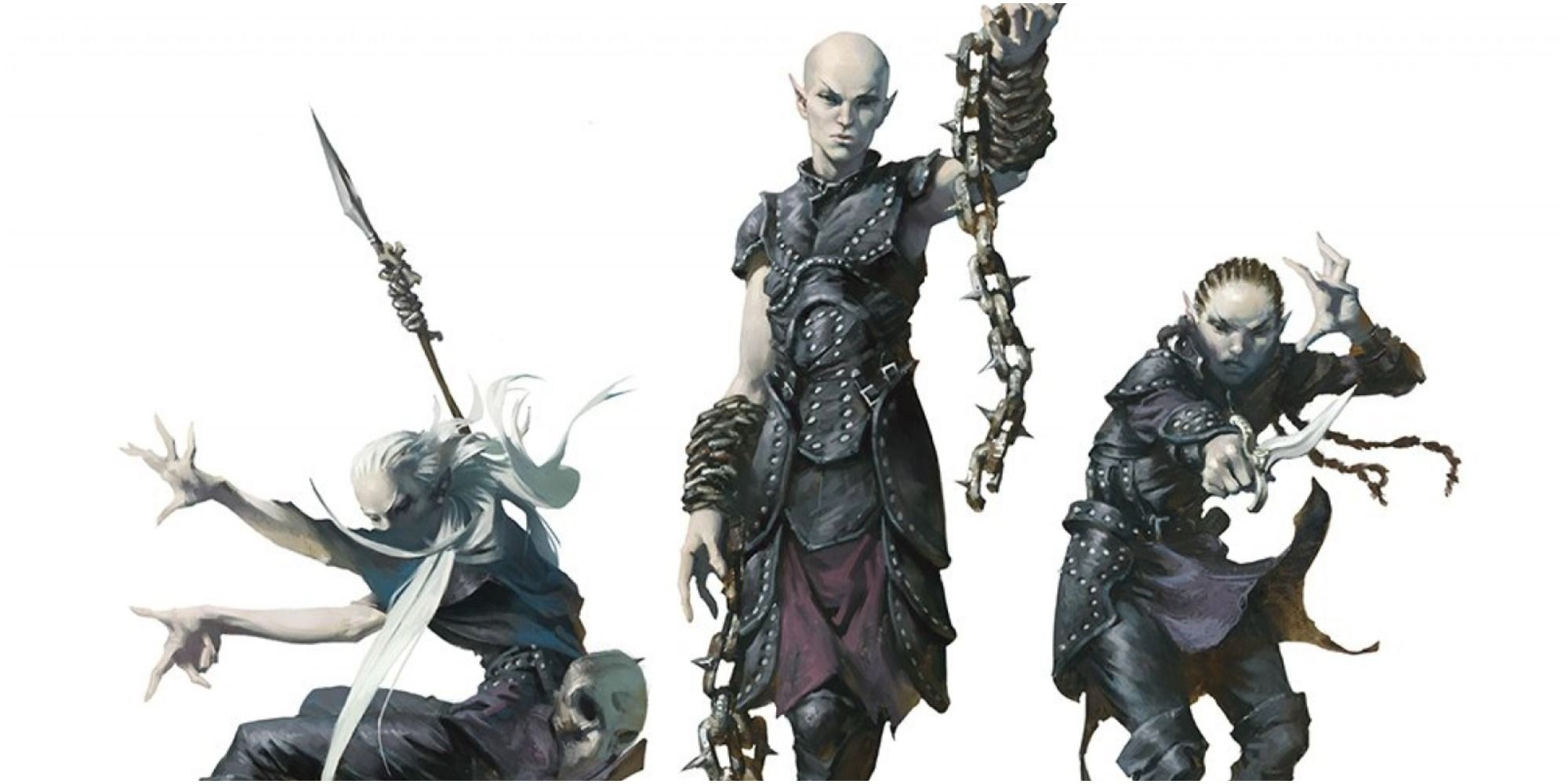 While Eladrin are emotion-driven elves with an inherent connection to the Feywild, Shadar-Kai are the exact opposite: elves of the gloomy plane of the Shadowfell. The Shadar-Kai traditionally serve as followers of the enigmatic Raven Queen, a god that resides within the plane.

Toting incredibly pale complexions, they might look just as perpetually youthful as other elves when within the Material Plane. However, they look notably older and time-worn when within the Shadowfell. While the Eladrin are inherently tied to their emotional states, the Shadar Kai often appear to be devoid of emotion altogether — though this isn't necessarily the case.

Mechanically, not only are these elves capable of teleporting in a manner comparable to an Eladrin, but when they do, they gain resistance to all damage types until their next turn. 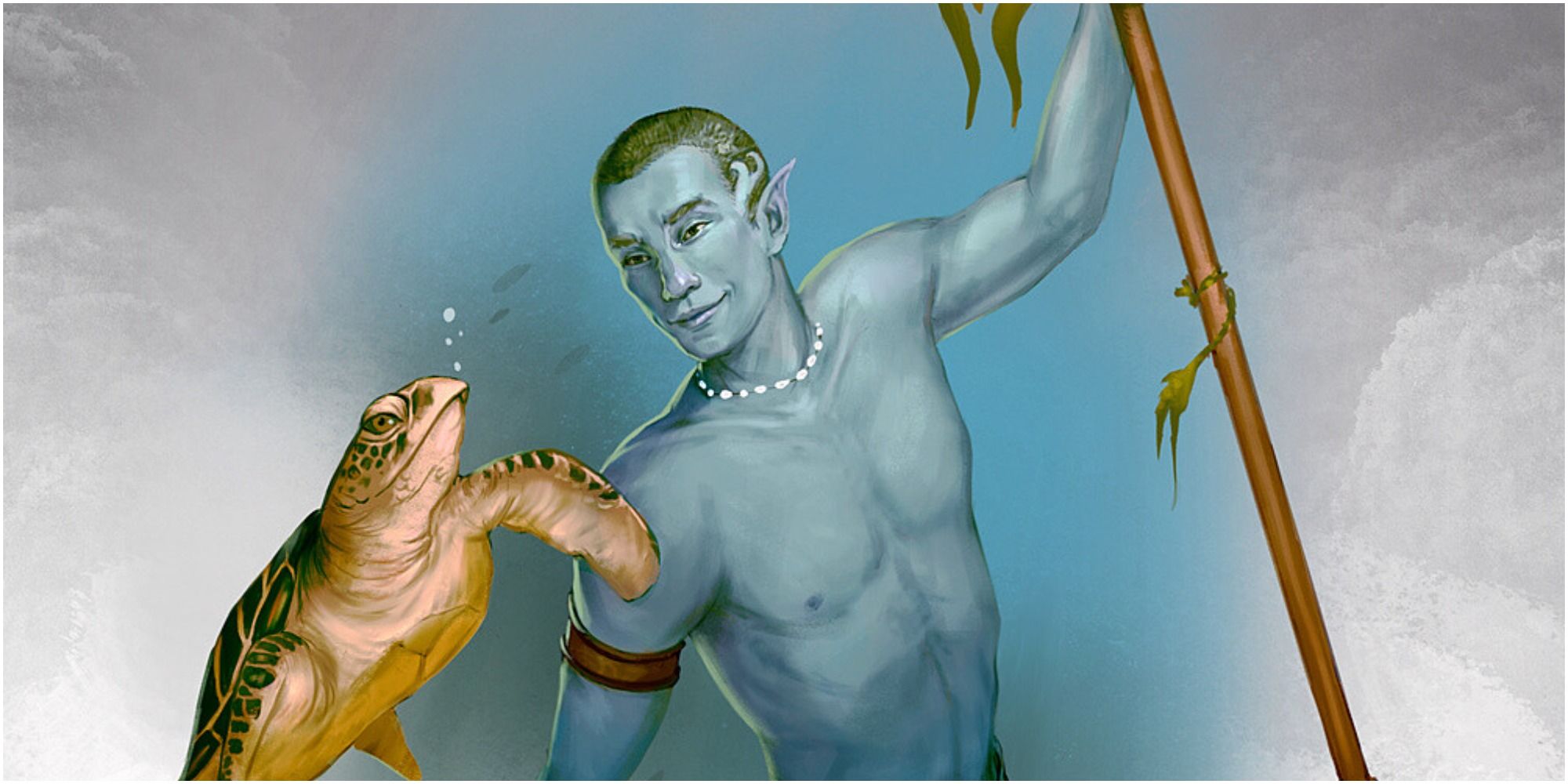 As their name would suggest, sea elves are amphibious elves that are at home within hidden communities within the ocean and within the Elemental Plane of Water. Blue-skinned elves, this race has a deep-rooted mutual animosity with the Sahuagin. Throughout the history of the multiverse, it is said that sea elves have explored the seas of many Planes of reality.