Sometimes you just need to hold onto a big hammer and wamma-jamma something into oblivion. Other times, you just want to cosplay as Guts from Berserk. Heck, you might just want to grab the biggest, baddest weapon around, and play whack-a-mole. If this is you, then going for a Strength build in Elden Ring will be right up your alley.

Strength builds are one of the lesser-played builds in Elden Ring. Why? Because having the guts to go toe-to-toe with the titanically large monstrosities that litter the Lands Between is hard to muster. For every meaty swing you take, another build could take two, three, or even more. It’s a playstyle that requires confidence, knowledge, and a big whopping stick.

What Is A Strength Build 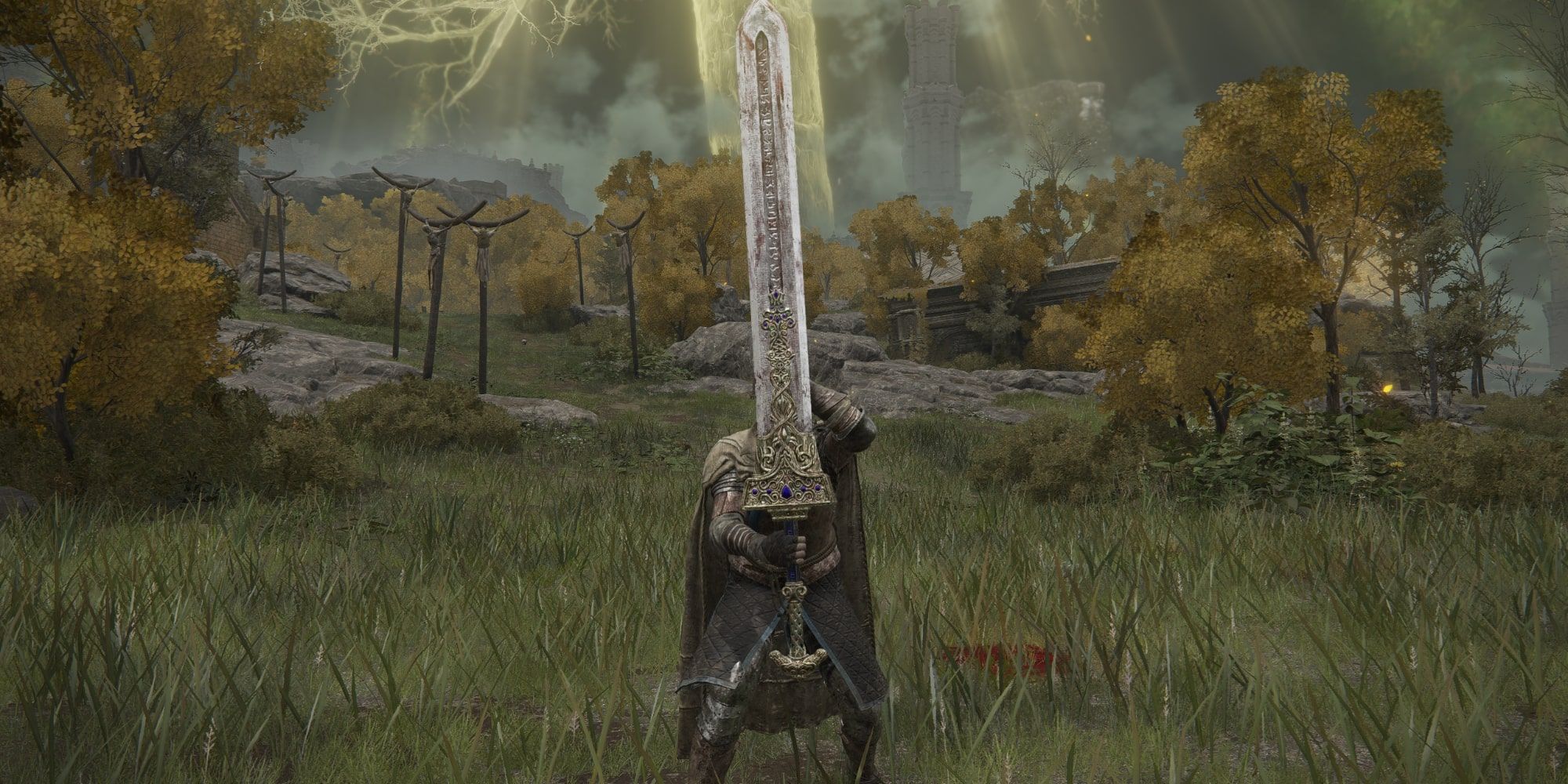 Strength builds, as the name implies, are builds in Elden Ring that focus on the Strength Stat first and foremost. Big weapons require bigger muscles, and praying for that one thunderous blow to land is all part of the fun. It doesn’t matter how big, small, fast, or slow your opponent is, you are going to pump your Strength as high as possible, fill up your Stamina bar, and get to swinging.

Stats To Aim For 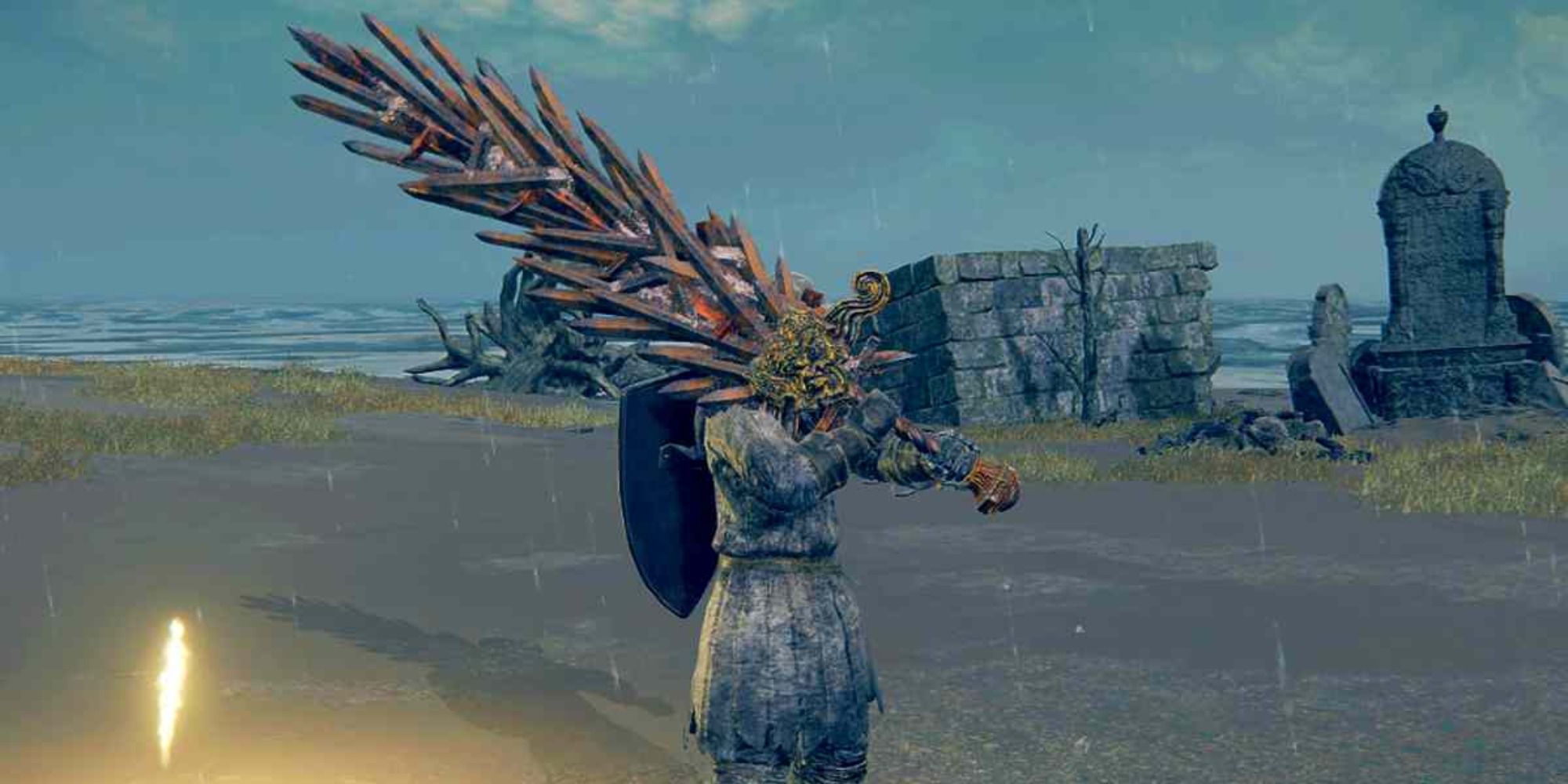 Since we are mostly focusing on pure Strength with very little – if any – investment in other areas, you want to pump Strength to 80. This is the hard cap for Strength, and you want to reach it fairly quickly.

That’s not to say you want to neglect your other stats, however. Vigor and Endurance are incredibly important as you need HP to tank hits, and the Stamina and Equip Load to carry your stick. Neglect these, and you’ll find yourself dying before you get any of your damage through.

As a general rule, you want to pick a weapon(s), and then quickly stack stats until you reach the minimum requirements. Remember, you will be required to invest some points in Dexterity in most instances. From here, start increasing your Endurance and Vigor. Aim for 50-60 Vigor and as much Endurance as you can pump.

You could also consider putting some points into Mind. Even though we aren’t using Magic, our Weapon Art still uses FP. Having a decent pool lowers downtime. 15-20 should be enough, but consider cutting this stat first if you need stats allocated elsewhere. We have put points into Faith to accommodate one of the latter builds – feel free to cut that investment for Endurance. 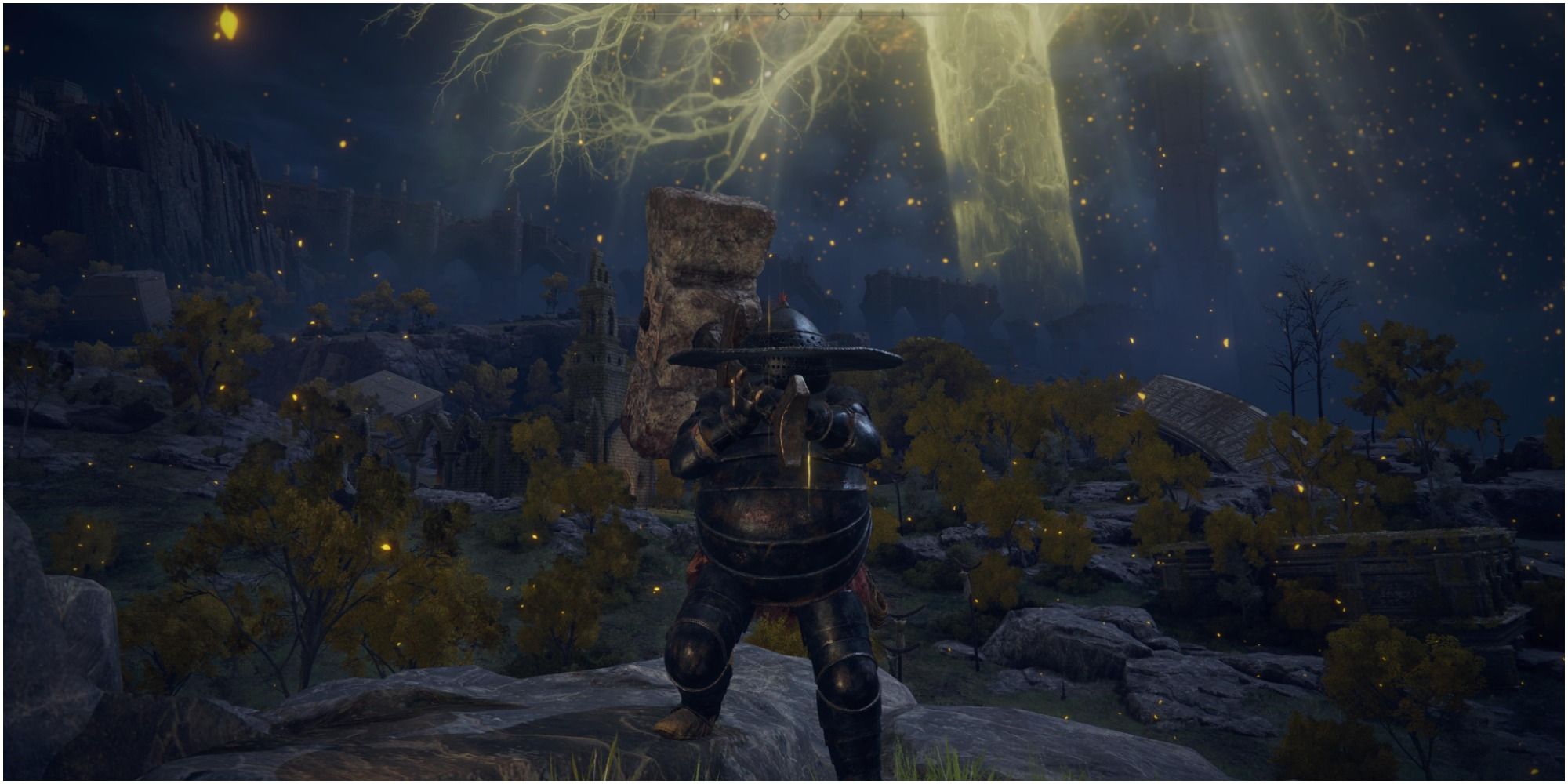 This is the ultimate Unga-Bunga route. You take the biggest hammer you can find, you equip the heaviest armor you can wear, and you jump attack things into oblivion. Very few builds can match your single swing damage. If you want to run and slam with reckless abandon, then this is for you.

For this build to work, you will need the Giant Crusher. This monstrous weapon can be found in the Altus Plateau and requires a whopping 60 Strength to use. Ideally, you want two of them – one in each hand – but one will work fine if you can’t get a trade.

Since Jumping Attacks come out quickly and deal massive damage, you will want to equip the Claw Talisman. This will increase your damage by a further 10%. To make your attacks even more powerful, having the Commander’s Standard as a swap weapon will allow you to use the Rallying Standard Weapon Art for a hefty damage boost.

As for your other talismans, you are free to use what you feel is right. The Green Turtle Talisman can increase your Stamina regeneration, the Axe Talisman can make your charge attacks stronger, and the Great Jar’s Arsenal will bump up your Equip Load.

The armor is simple – take the heaviest armor you can wear, whilst still being able to Medium Roll. Good armor sets would be Veterans, Banished Knights, or Bull-Goats. You can also push your Equip Load to Heavy for a Fat Roll, and then mix the Winged Crystal Tear into your Flask of Wondrous Physick to have 3 minutes of Light Rolling regardless of Equip Load. 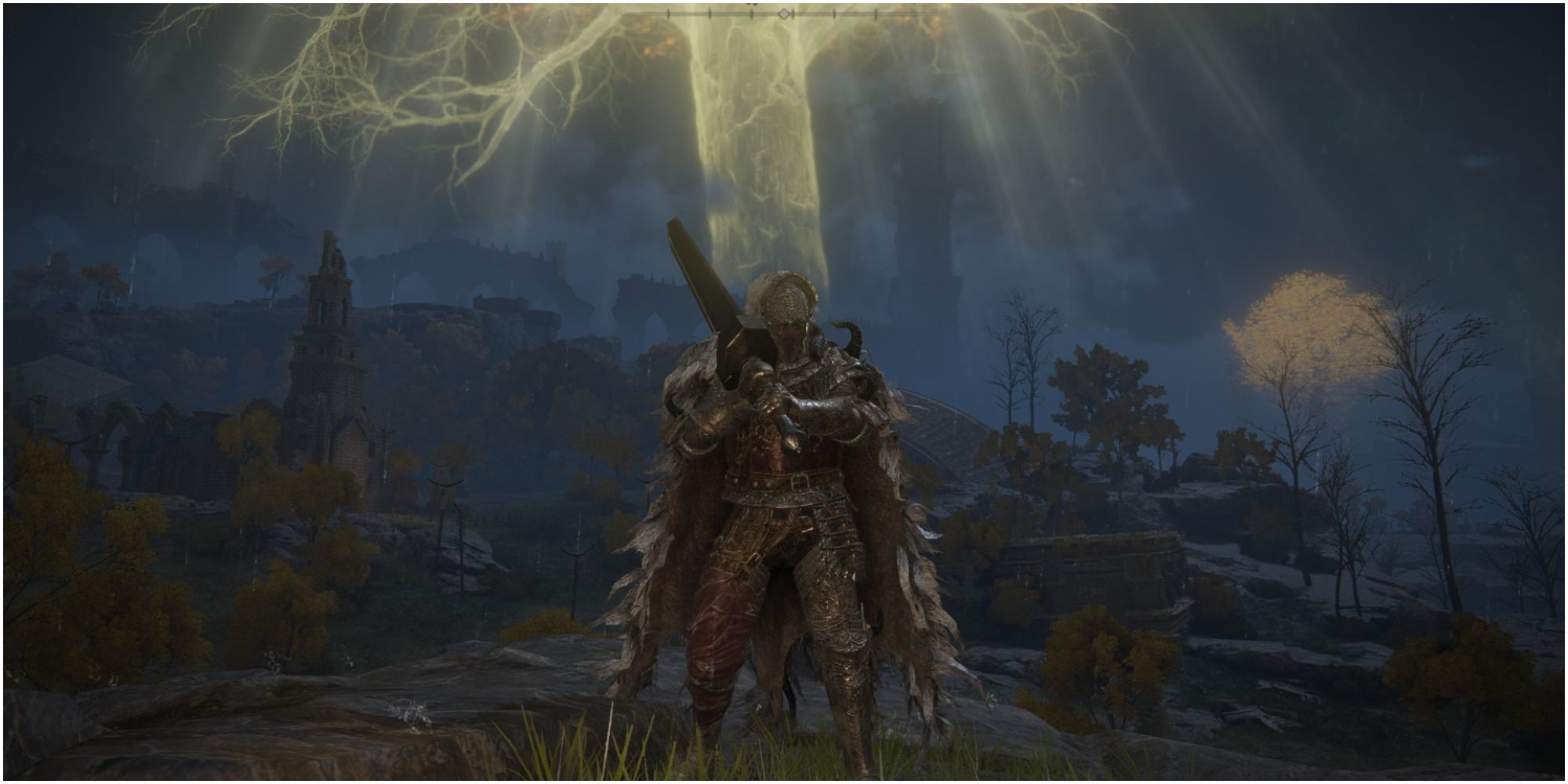 This build is an offshoot of the Unga-Bunga build but doesn’t rely on the gimmick of stacking Royal Knights Resolve. Instead, this build is designed around Poising through every attack and landing monstrously powerful single hit swings using the Lion’s Claw Weapon Art.

This build can be used with just about any Strength-based weapon, but we have chosen the Greatsword since it has a fantastic moveset, deals incredible damage, can be found early, and doesn’t require too many stats to wield in the early game. You can find the Greatsword by following the main road through Caelid and checking the overturned carriage. The Ash Of War can be found nearby too, by heading to Fort Gael in southeast Caelid.

As is normally the case, you want to upgrade the Greatsword to a Heavy Greatsword to maximize Strength scaling. With Lion’s Claw, you will be able to hit for thousands of damage with ease once the build is finished. Don’t forget to bring along the Commander’s Standard for that extra boost in attack damage.

The benefits of Lion’s Claw are numerous. Damage is the most obvious. The real strength of the Ash Of War comes from its incredible Poise. This Ash Of War will power through everything Elden Ring has to throw at you. We have never been interrupted when using this attack, and we’ve tried it against just about every attack imaginable. In short, when you use this attack, it is landing no matter what.

For Talismans, consider bringing anything that can boost your Stamina or Stamina Regeneration. Lion’s Claw uses a hefty chunk of Stamina, and you want to be able to dip out after you’ve used it to prevent follow-up damage. On top of this, Shard Of Alexander will make Lion’s Claw even stronger.

Once again, Armor should be the biggest, bulkiest armor you can find. If you care about rolling, then aim for Medium Rolling. If you don’t, then slap on Bull-Goats or Banished Knights for maximum defense and poise.

Winged Crystal Tear continues to be a fantastic option if you want to wear the heaviest of armors whilst still having a Light Roll. Strength-Knot will also do work, increasing your damage even further. The Opaline Crystal Tear could be used to buff up your Magic damage resistances based on the situation. 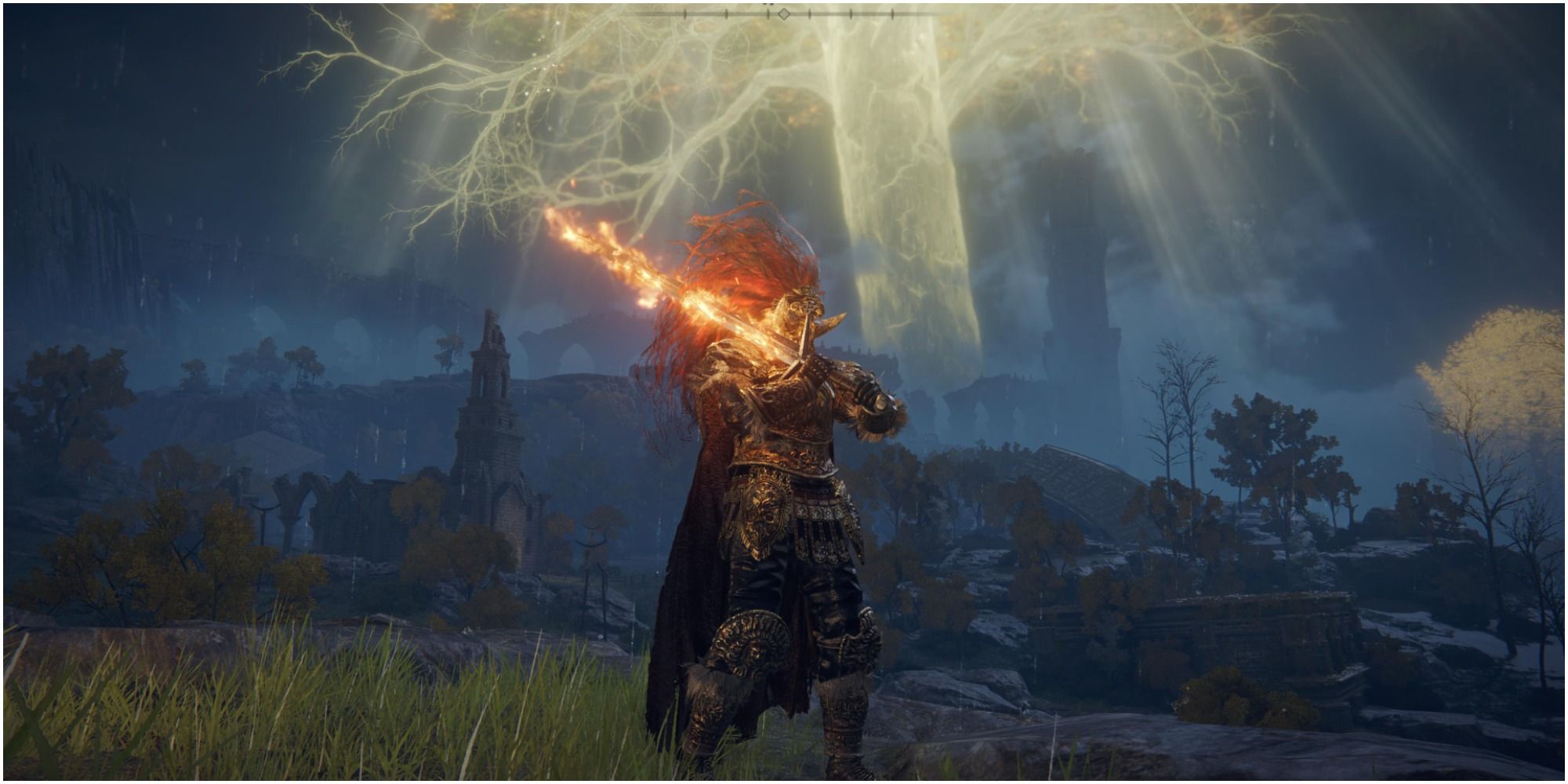 This is the only build in the list that will be using Magic in any capacity – specifically, Flame, Grant Me Strength. The gimmick of this build is to stack as much split damage as we can and use big weapons wreathed in fire. This build takes more setup since there are more buffs required to make it sing – but when it’s all there, it hits like a truck.

Just about any weapon will work here. Providing it’s really big, really heavy, and can be infused with fire, it’s good to go. Halberds, Colossal, and Greatswords are all excellent choices as they have phenomenal movesets and great range. Don’t forget to use the Commander’s Standard to buff your attack before any encounter.

For Talismans, you will want to bring anything that complements your playstyle. Axe if you are using Charge Attacks, and Claw if you are using more Jump Attacks. To boost your damage, absolutely bring the Fire Scorpion Charm which not only buffs your attacks but also your Ash Of War. Finally, the Shard Of Alexander is a great addition.

Nothing has really changed here. You want the bulkiest armor you can find. However, since our Flask Of Wondrous Physick is going to be busier, you may want to dial back from the Heavy Load+Winged Tear combo and stick to Medium Load. Blaidd’s armor and the Crucible Knight set are pretty good for this role.

If you are dedicated to the Light Roll, then packing the Winged Crystal Tear is a must. However, if you want more damage, then combining the Strength-Knot Crystal Tear with the Flame-Shrouding Cracked Tear will be your best bet.

The only Incantation you need here is Flame, Grant Me Strength. This incantation is a double whammy buff that increases both Physical Damage and Fire Damage. Since we are using both of these damage types, our damage is buffed twice. This increase cannot be overstated and is the crux of this build.

You could also consider bringing along Golden Vow to boost your stats further, but this can easily be replaced with the Commander’s Standard.