When deciding between armor sets in Elden Ring, the factor most players look at is how much damage they will protect you from. More advanced players will then consider how much Poise a set provides, then maybe its Resistances if they’re planning on walking through a swamp.

But Poise, Resistance, and damage mitigation aren’t the only factors that can make an armor set valuable. There are a number of unique sets that have special effects that make them worth wearing, even if they won’t protect you as well as the heaviest sets in the game. 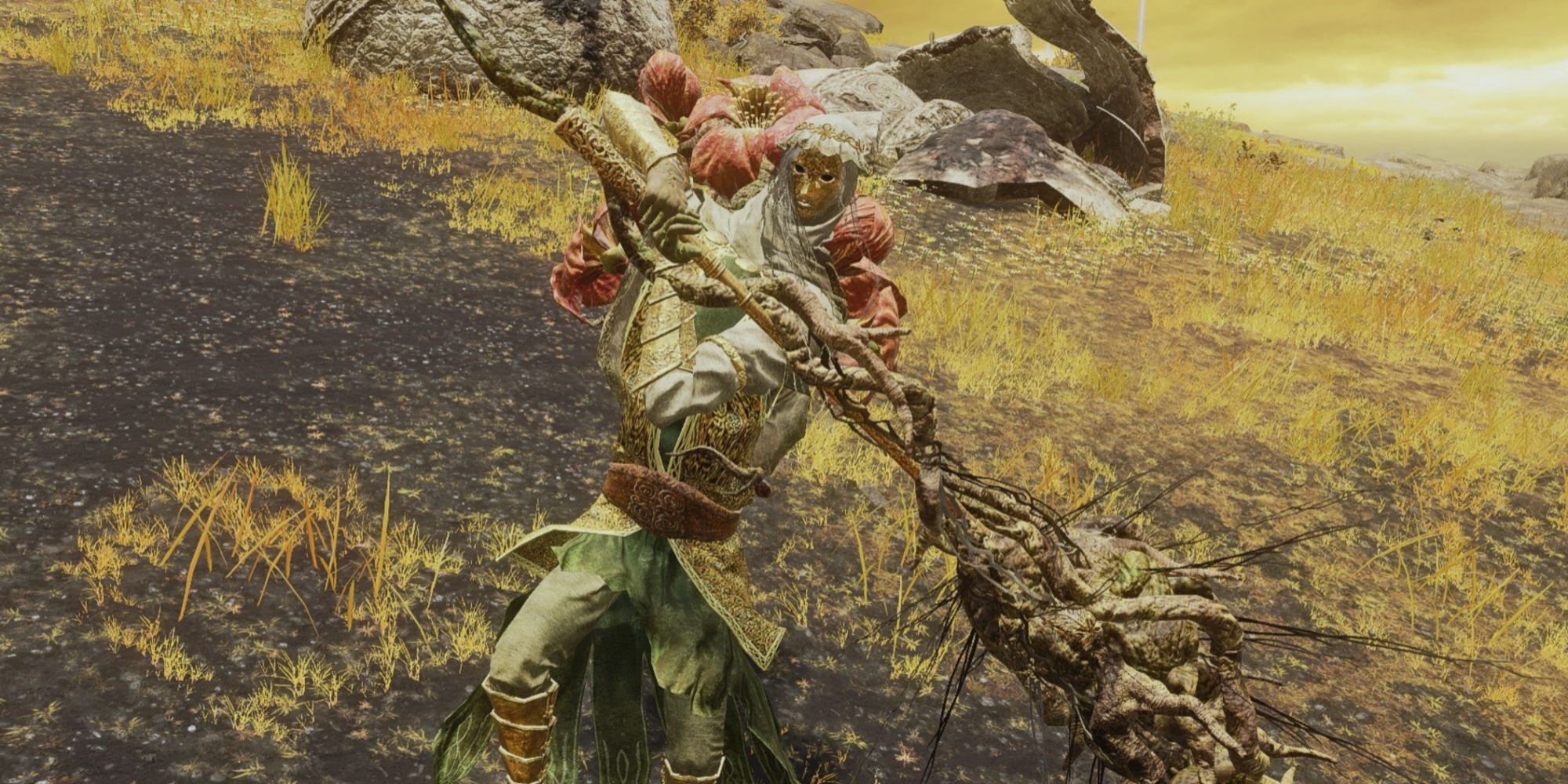 The version of the Guardian Set that most players will encounter doesn’t have anything unique about it. However, there is a specific variant of the chest piece that only drops from the Guardian enemies that have the large flowers on their backs.

The Guardian Garb (Full Bloom) increases how much your Flask of Crimson Tears heals you at the cost of decreased resistance to Fire damage. It’s not as effective for this purpose as the Crimson Seed Talisman, but switching to this set if you need some extra healing could be a useful trick. 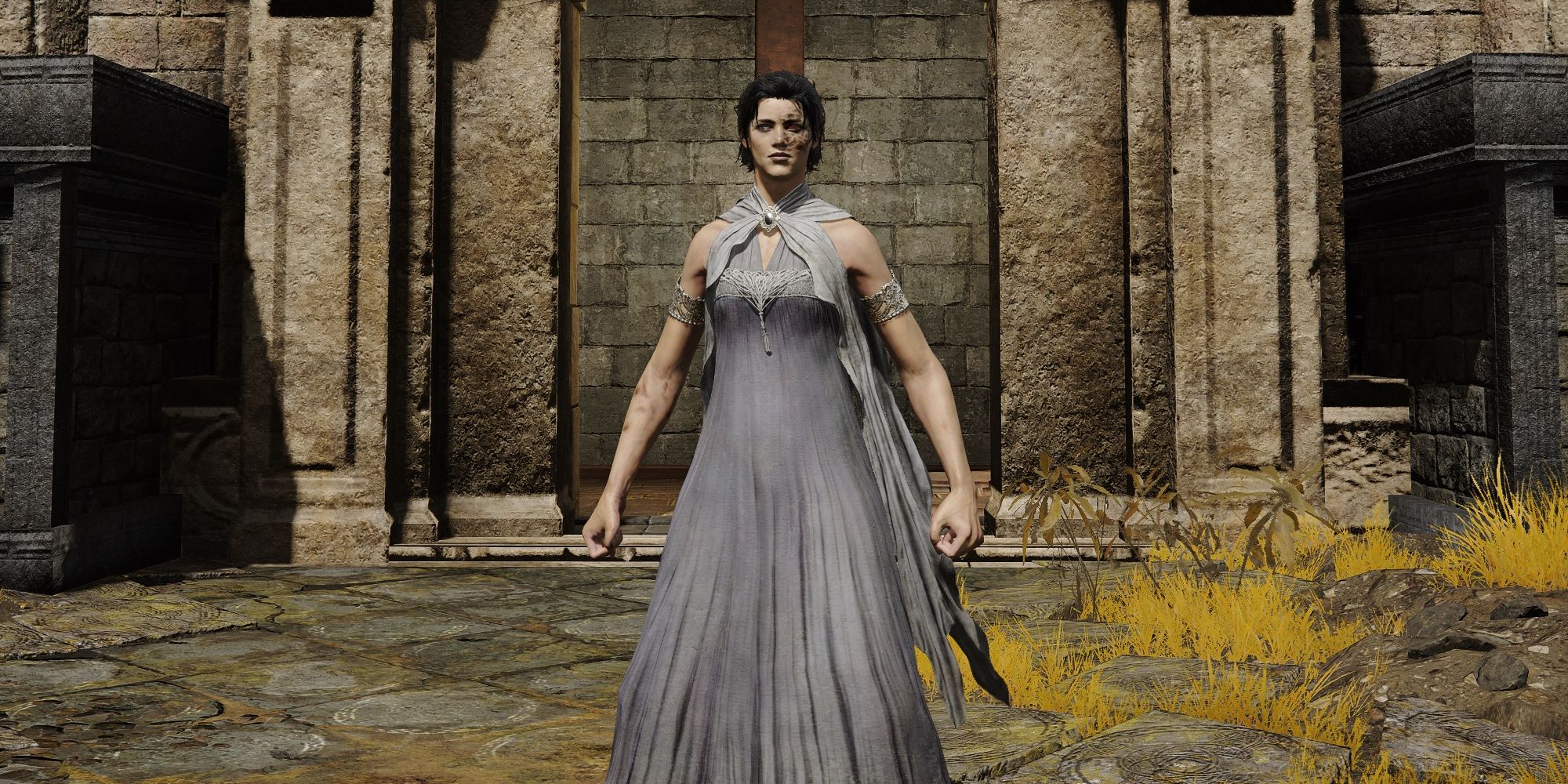 When talking about sets with unusual effects, the Deathbed Dress, despite consisting of only a chest piece, is likely one of the first pieces of armor that comes to mind. When worn, it heals nearby allies for two health per second. While this does absolutely nothing if you are doing a solo run, it can heal other players when engaging in some jolly cooperation.

Additionally, it will also heal your Spirit Summons. If you are relying on them to tank damage for you while you stay well out of harms way, the Dress can provide a passive alternative to casting healing Incantations. Fittingly, the Deathbed Dress is found in a bed alongside Lionel’s Set, in the same room as the Lower Capital Church Site of Grace in Leyndell, Royal Capital. 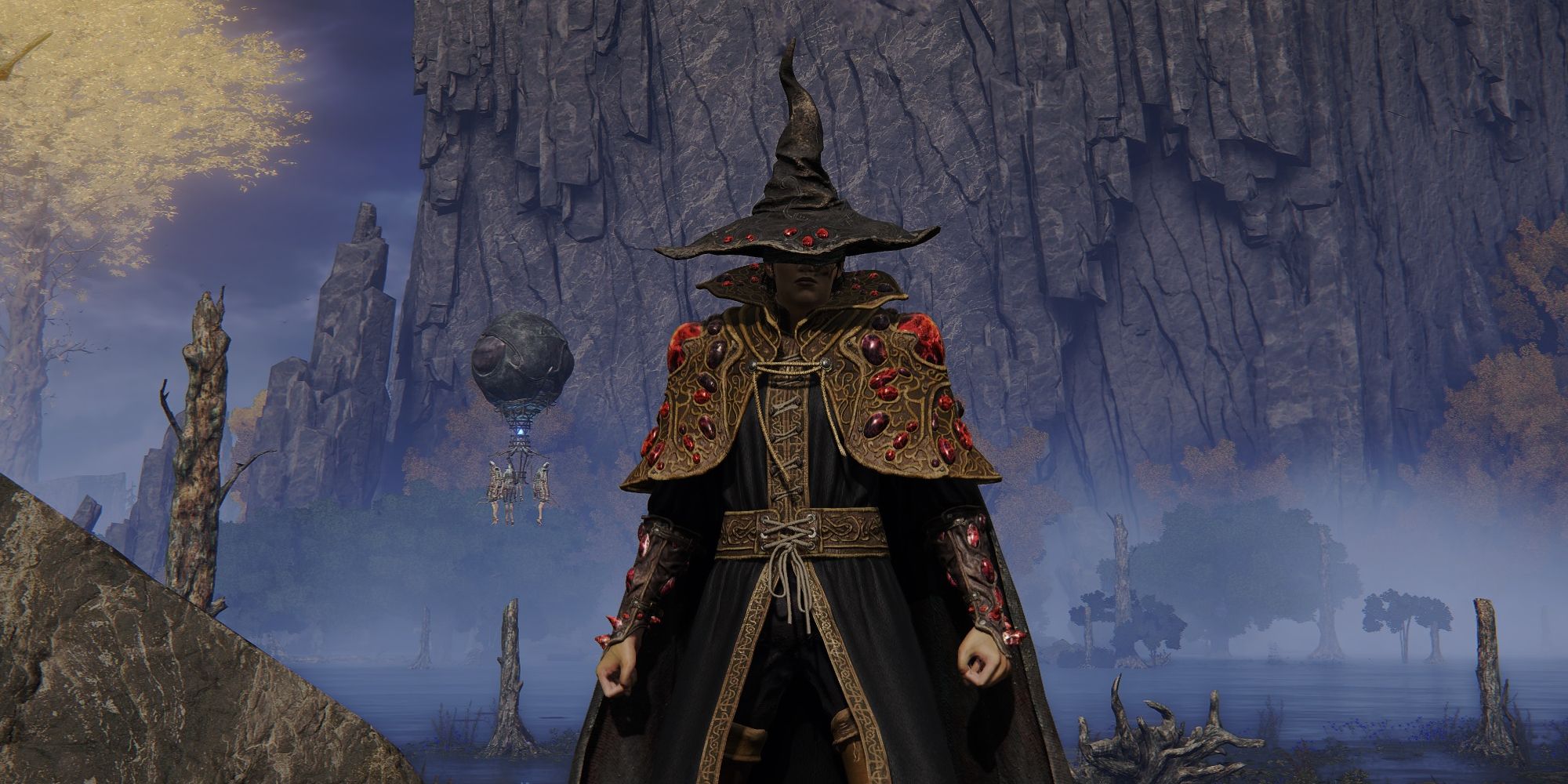 Alberich’s set is worn by Mad Tongue Alberich, who invades you at the Roundtable Hold. You won’t actually get your hands on it until much later in the game, when it can be found in the Fortified Manor in Leyndell, Royal Capital. Wearing the full set buffs Elden Ring’s two Aberrant Sorceries — Briars of Punishment and Briars of Sin — by 20 percent.

These Sorceries cause damage and Bleed buildup at the cost of some of your own health. Unfortunately, they are widely regarded some of the weakest Sorceries in the game, lowering the effectiveness of Alberich’s set. However, both Aberrant Sorceries got fairly substantial buffs in a recent patch, so they — and the set — might be worth giving another shot. 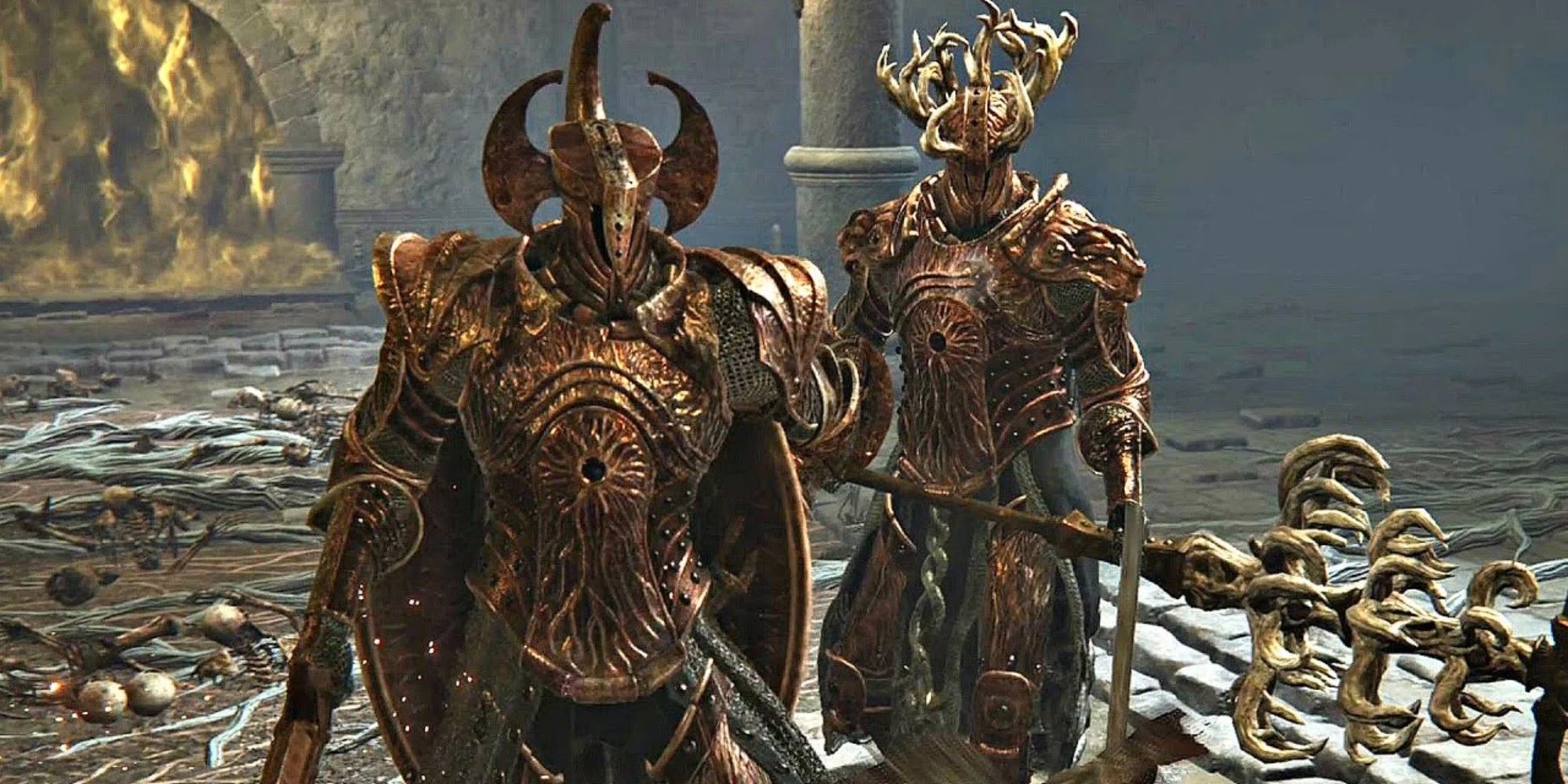 While visually distinct, these two sets are virtually identical in most other ways. There are some minor differences in their stats, but which you choose might depend more on which you happen to pick up. The Axe variant is dropped by Crucible Knight Ordovis at the end of the Auriza Hero’s Grave in the Capital Outskirts, while the Tree variant is in a chest behind Crucible Knight Siluria in the Deeproot Depths.

They both buff Aspect of the Crucible Incantations by about four percent for each piece you’re wearing. Like the Aberrant Sorceries, these Incantations are not especially powerful, but they too got buffs recently, so we’ll see if they become more viable going forward. 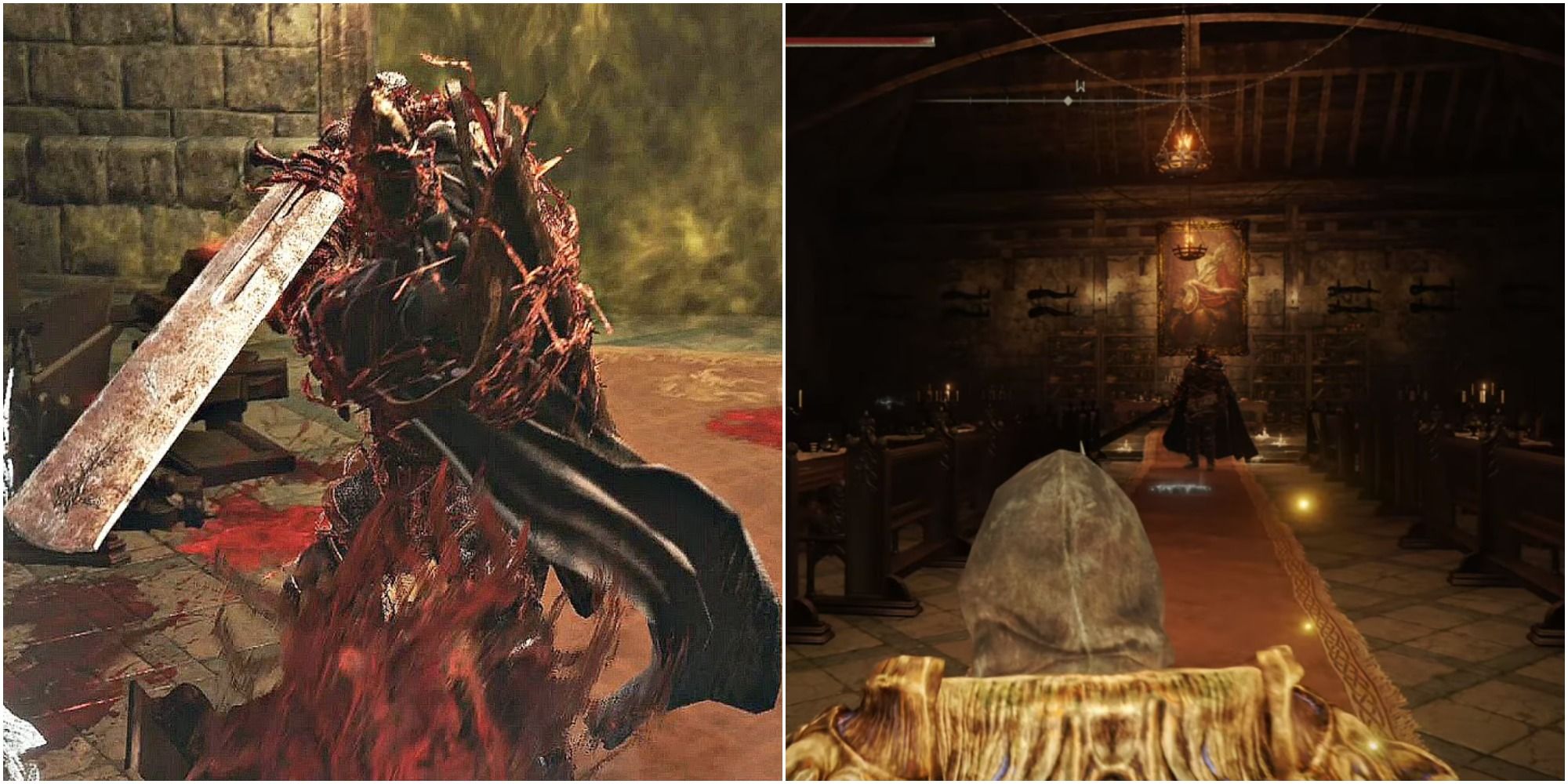 The Briar Set same effect as the Armor of Thorns from Dark Souls and Dark Souls 3, dealing minor damage (two damage per piece of the set worn) when dodge rolling into an enemy. In Elden Ring, this effect also works with Quickstep and Bloodhound’s Step. On the surface, this effect seems extremely minor, and for the most part, it is.

However, the Briar Set does have some actual utility. It can allow you to finish off enemies that are hanging on by a sliver of health, or kill those annoying resurrecting skeletons, since it only takes a single point of damage to stop them from coming back to life. Unfortunately, those minor benefits might not seem worth it when you need to kill Elemer of the Briar in the Shaded Castle to get it. If you do so, however, you can then purchase his set from Enia in the Roundtable Hold. 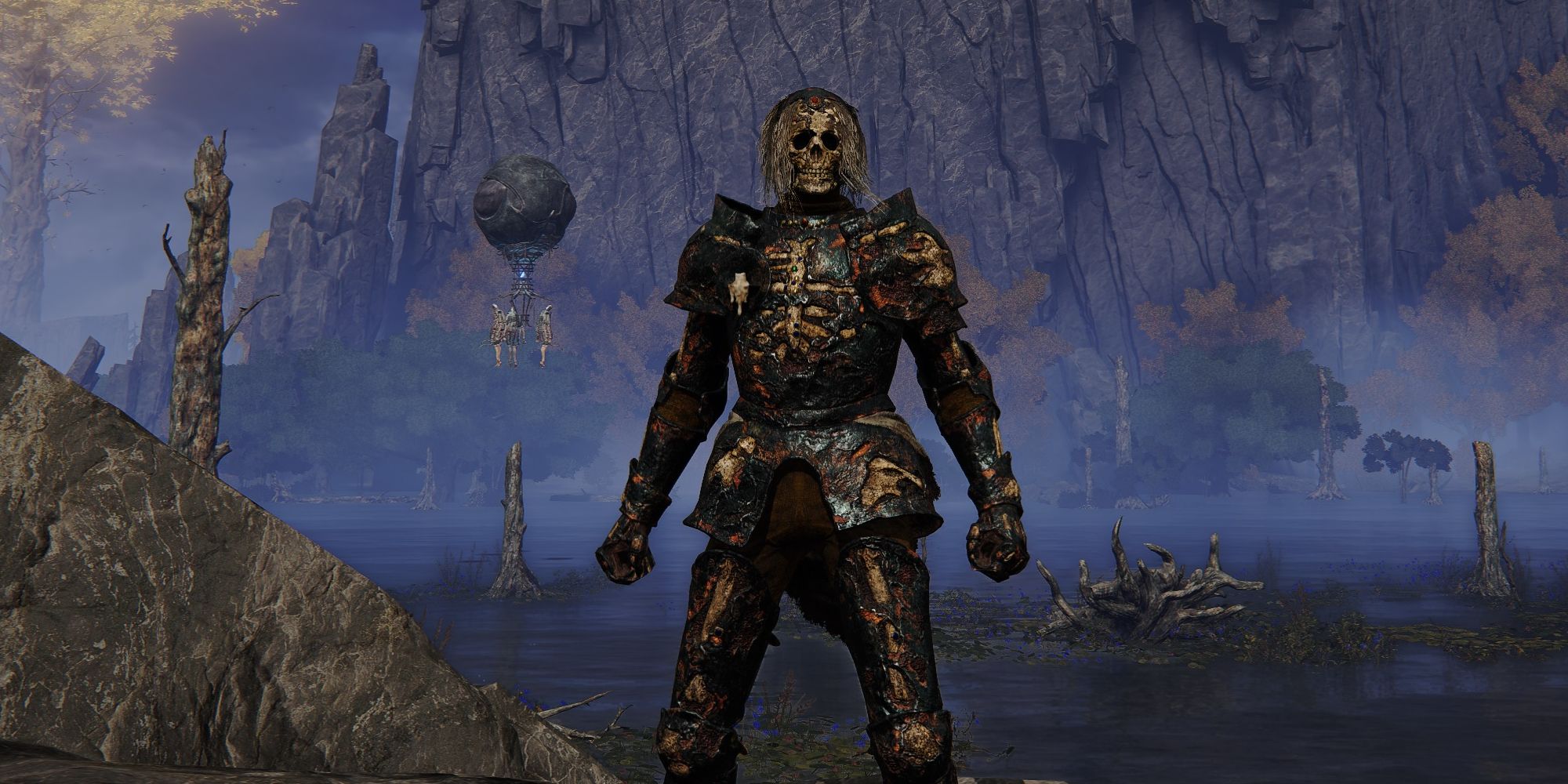 Gideon Ofnir’s servant, Ensha, will invade you in the Roundtable Hold after you get either half of the Haligtree Secret Medallion. If you defeat him, you can then pick up the Royal Remains Set where he was silently leaning in the game up to that point.

If you are below 18 percent health, the Royal Remains Set replenishes your health by two per piece of it you’re wearing. That often won’t be relevant, since many enemies will just kill you at that point. However, even minor healing can sometimes allow you to survive otherwise lethal damage. Additionally, if you are running a build revolving around the Incantation Fire’s Deadly Sin, the Royal Remains set will counteract the self-damage effect of that Incantation and keep you alive. 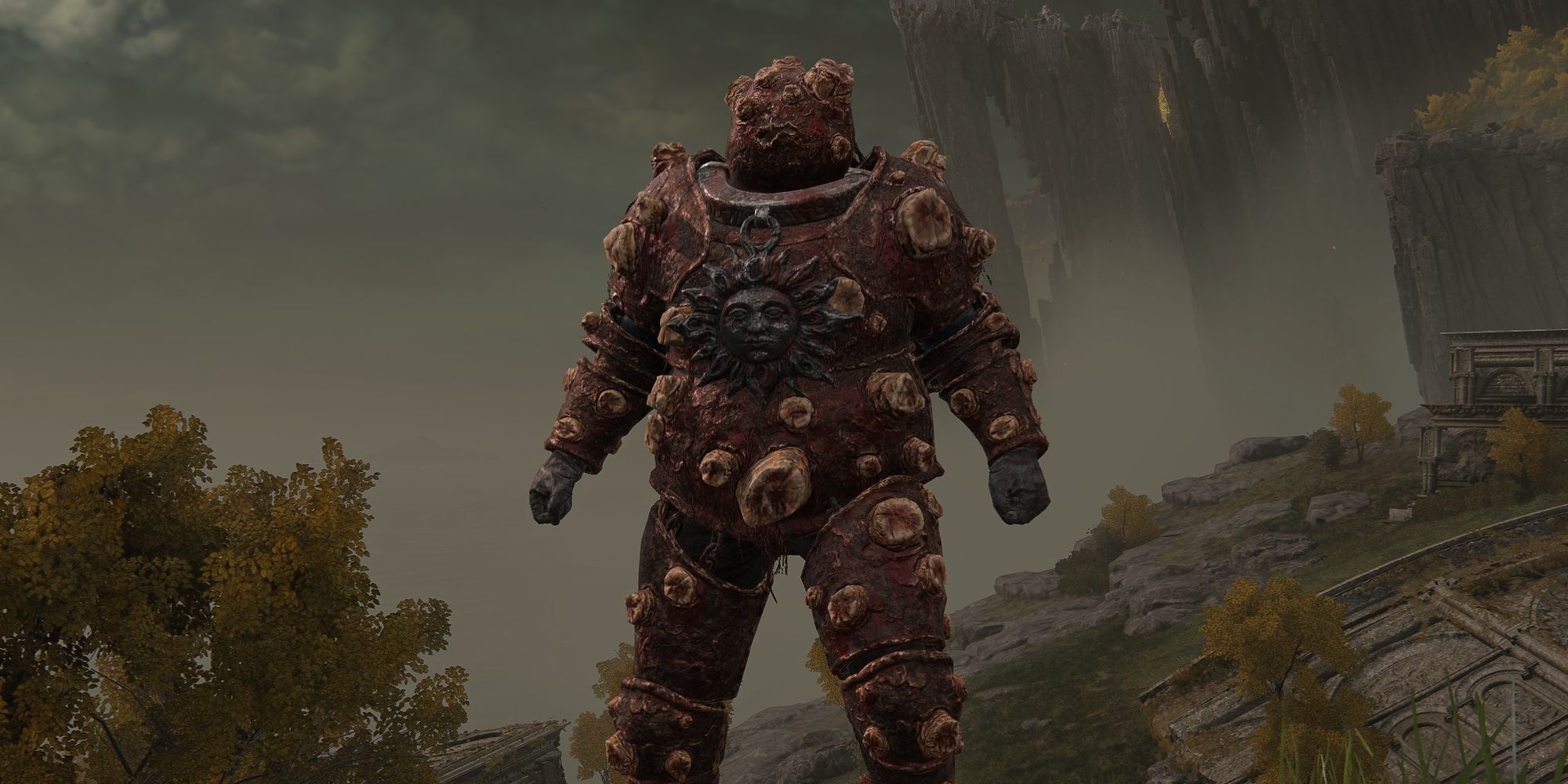 The set worn by the Loathsome Dung Eater, you’ll have to take the Omen Set off his corpse if you want it. And there are good reasons to do so. In addition to providing decent protection, the set buffs the damage of the Omen Bairn and the Regal Omen Bairn items by a total of 20 percent if you are wearing every piece.

Are these items good? Not especially. But if you combine the Omen Set with other ways to buff Holy damage, they can become viable offensive weapons, creating a unique playstyle. 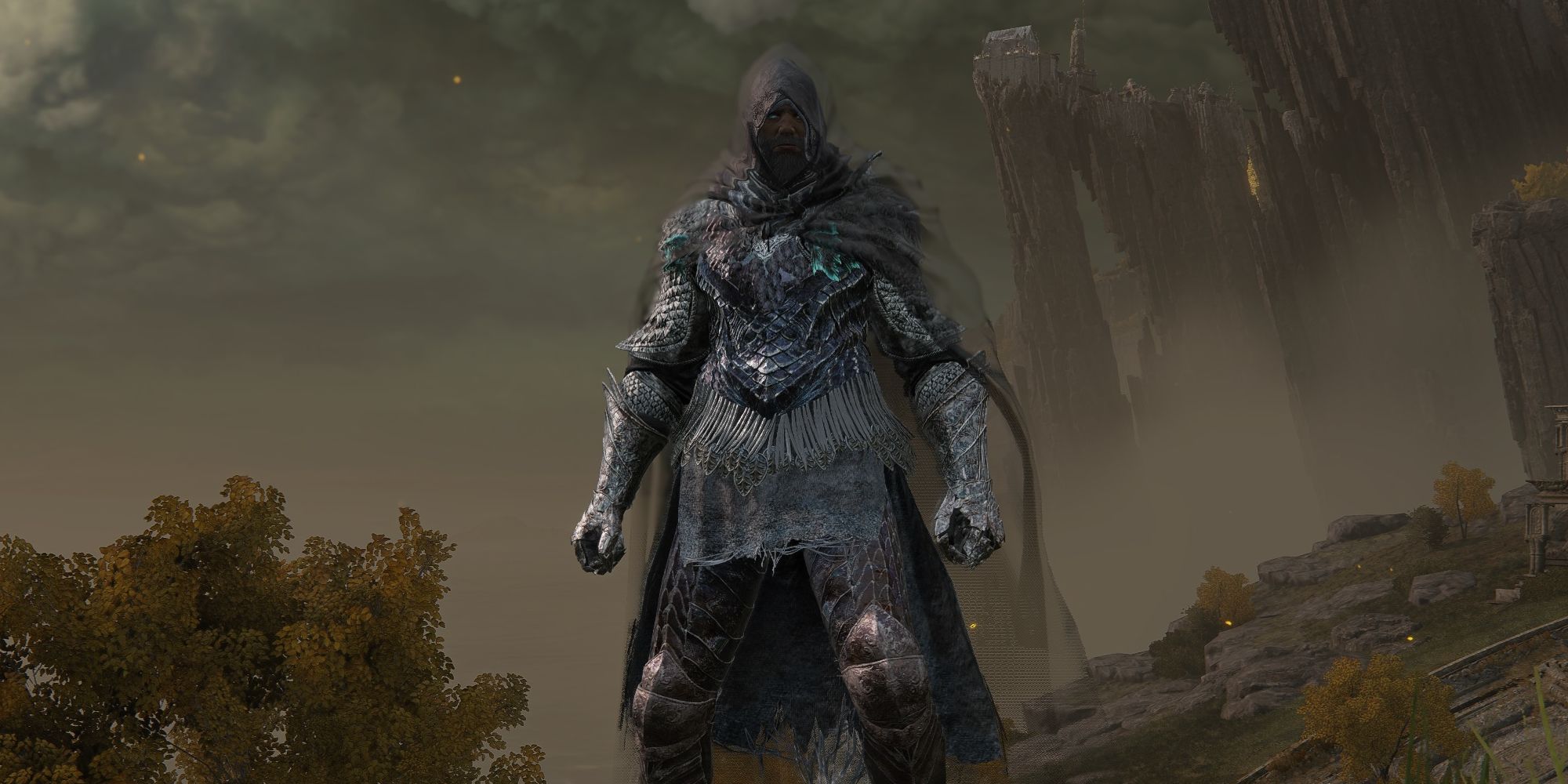 The armor worn by the Black Knife Assassins, the draw of the Black Knife Set is the chest piece, which makes your movement silent. It can help you sneak up on people in PVP, but it’s also useful in PVE, since enemies will have a much harder time sensing your presence. This can be especially useful if you are playing a low-health, high-damage build, like a Sorcerer.

The set just makes traversing the Lands Between a much less stressful experience. Plus, you get a cool translucent hood and cape, so your fashion will be on point. If that sounds good to you, you can find the entire armor set on a dead Black Knife Assassin under an archway behind Ordina, Liturgical Town. 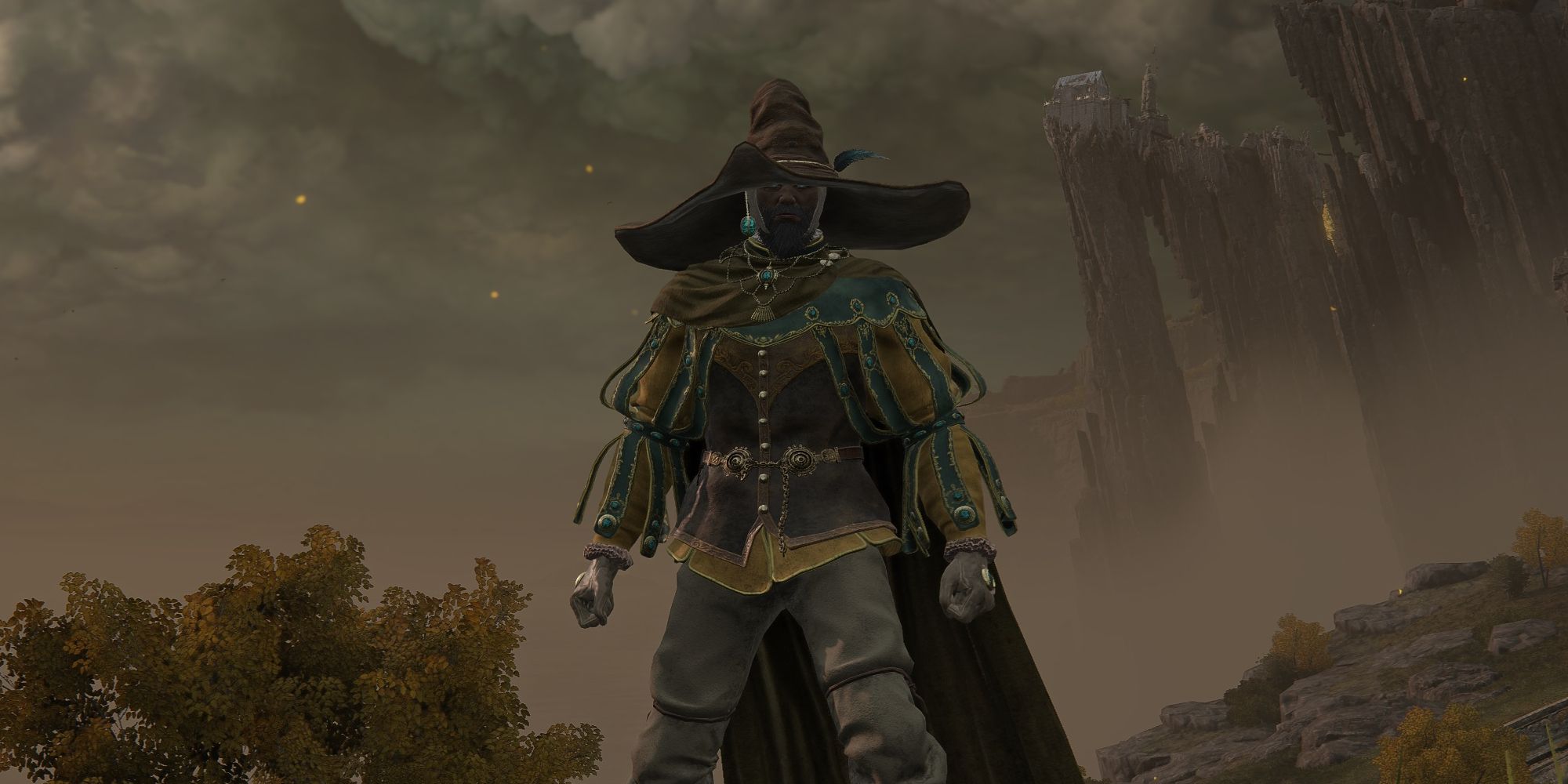 The description of the Spellblade Set says that it boosts the power of sorcery skills. And it does exactly that, but the wording can be confusing. The phrase “sorcery skills” has nothing to do with Sorceries or Incantations; instead, it is referring to Weapon Skills that deal Magic or Cold damage, such as the Glintstone Pebble or Ice Spear Ashes of War.

However, while the Spellblade Set might not do what you were expecting, it can still be extremely useful. There are some exceptionally powerful Weapon Skills in Elden Ring, and boosting them by eight percent is no small benefit. Getting the Spellblade Set will take you a while, though; you have to pick it up on the balcony after Rogier dies at the end of his questline. 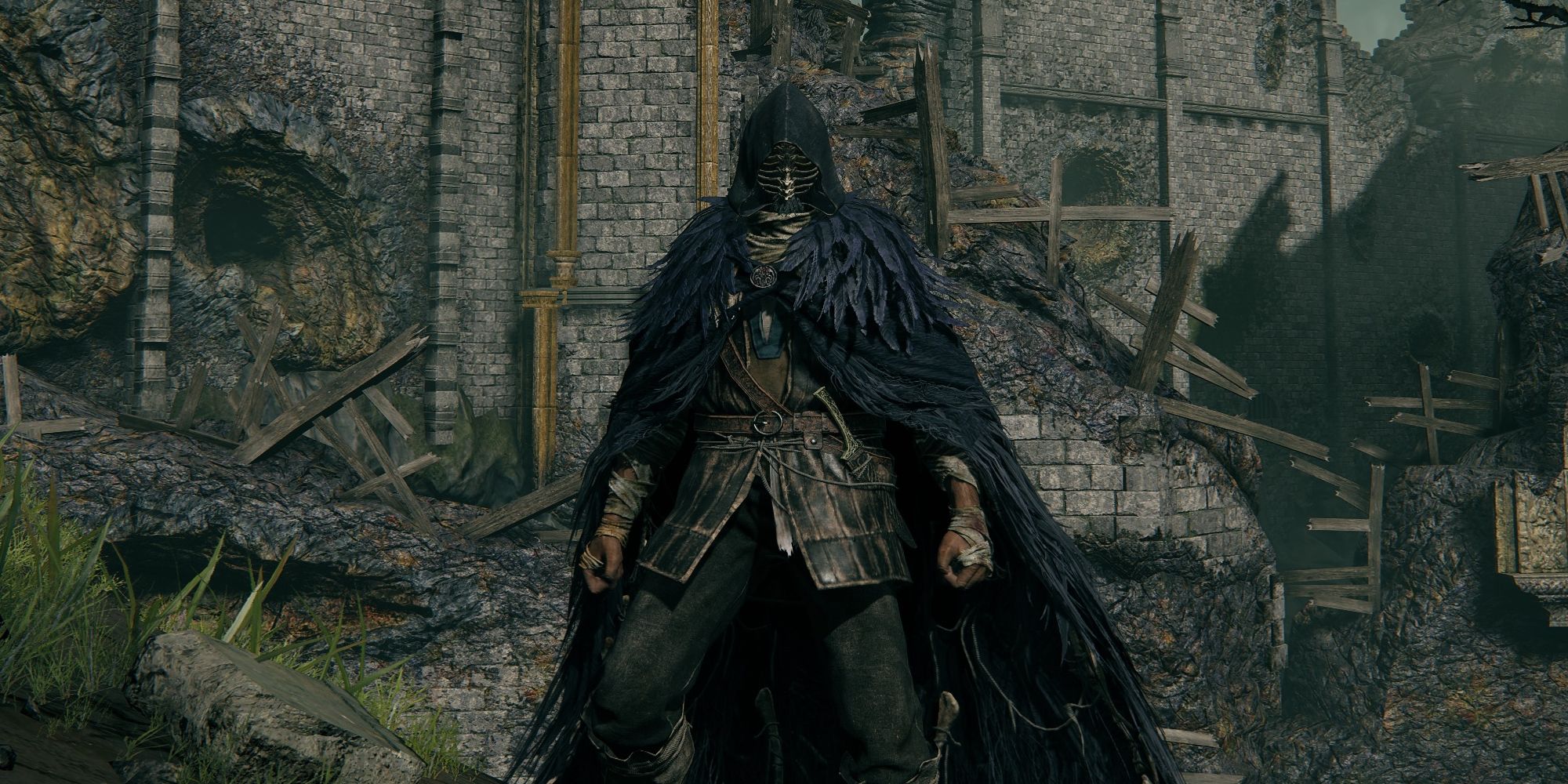 The Raptor’s Set is essentially an updated version of the Bandit set, which is why it doesn’t have its own legs or gauntlets. The helm, the Skeletal Mask, has no unique qualities beyond its appearance, but the chest piece, the Raptor’s Black Feathers, boosts the damage of your jump attacks by ten percent. These attacks already deal a lot of damage, especially when wielding a Colossal Weapon in each hand.

The effect also stacks with that of the Claw Talisman for a combined 25 percent boost, allowing you to absolutely obliterate enemies in both PvE and PvP. If you want this key component to several meta builds, you can find it in a chest hidden behind one of the many illusory walls in the Sage’s Cave, located in the western Altus Plateau.