Elden Ring is not the first Souls game to feature PvP multiplayer. In fact, the same system of invading and helping has existed in the Souls series from the beginning with Demon's Souls. How it works in Elden Ring is if you choose to engage in multiplayer and summon a cooperator, you open yourself up to being invaded.

There are also options for summoning invaders on purpose to duel, but either way PvP combat is quite different that regular PvE combat in Elden Ring. This list will go over some of the most effective weapons for PvP, but remember that any weapon is a viable one in the right hands, so don't worry about popularity too much. 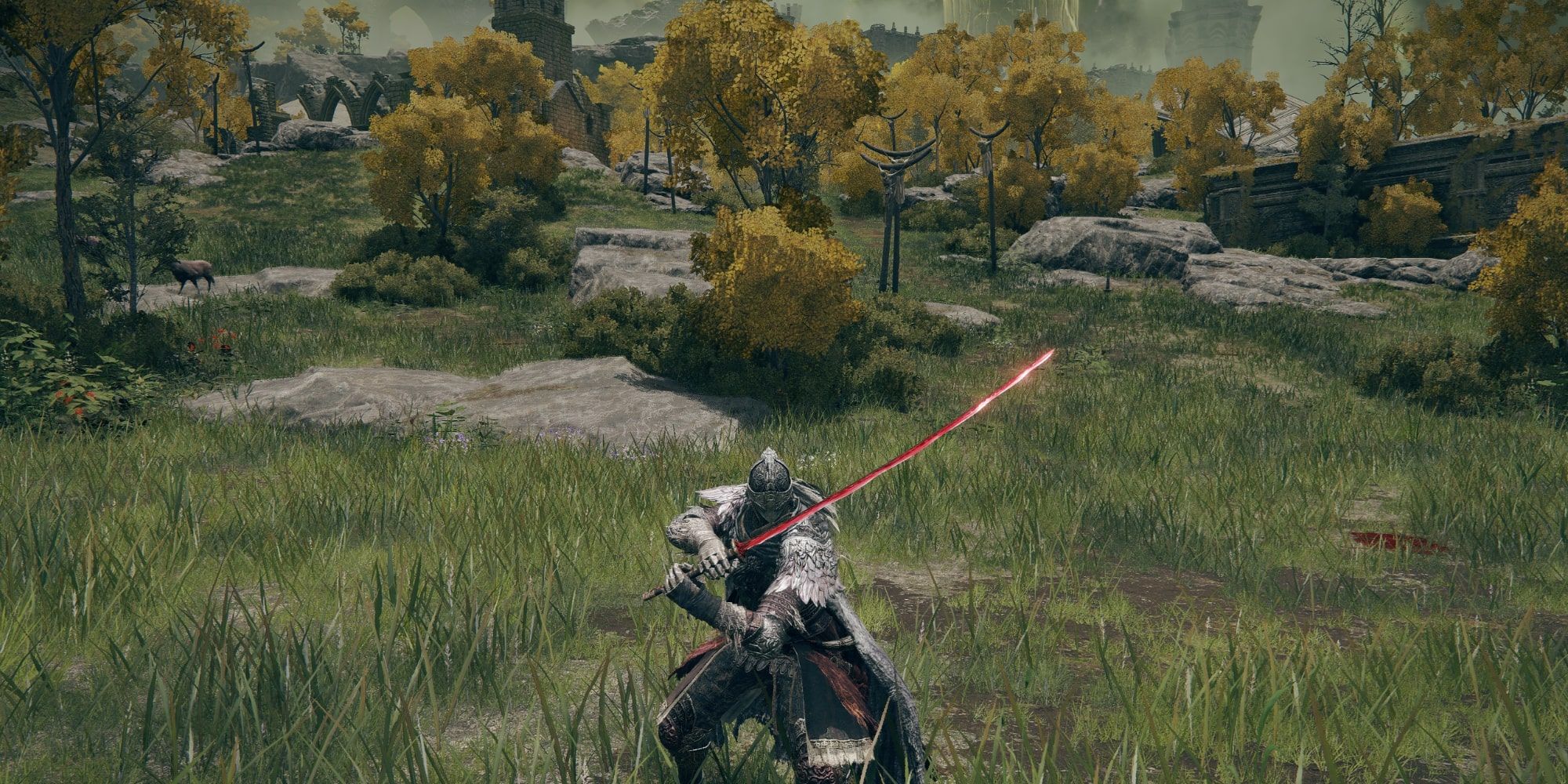 If you have engaged much with Elden Ring PvP, you have probably encountered Rivers of Blood at some point. A Weapon Skill that can instantly kill pretty much any opponent with blood loss sounds pretty good, and it is, but it is also fairly simple to dodge.

Something to note is your familiarity with a weapon will dictate your skill, and that familiarity will be easiest with weapons you like. Basically, don't worry so much about the weapons everyone else is using, and instead just use what you find fun. 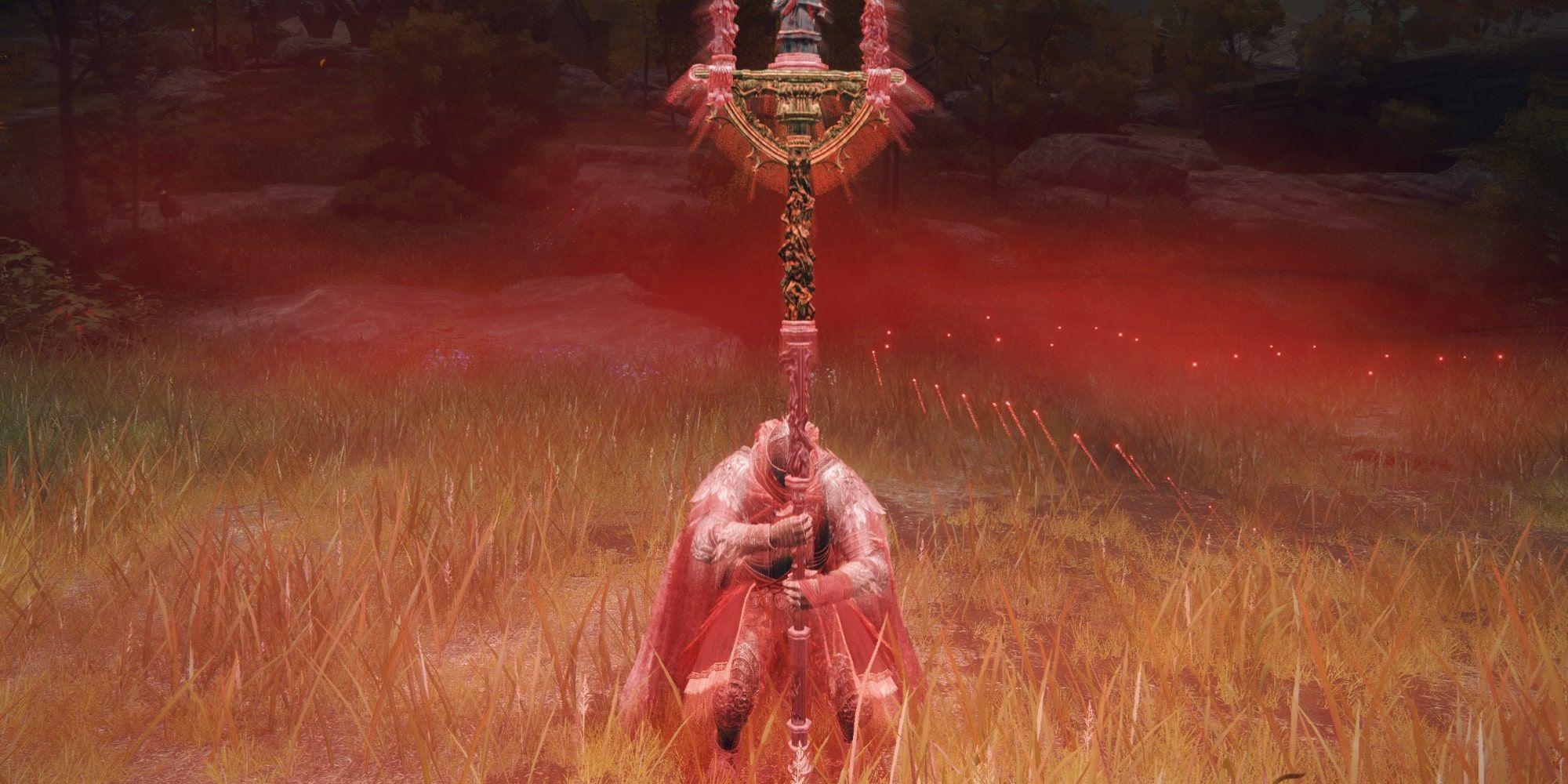 Another blood loss weapon, Mohgwyn's Sacred Spear is similar to Rivers of Blood in that it can instantly defeat opponents. This time the Weapon Skill is a bubble around you that inflicts rapid bleed and damage on enemy players. It even works through walls, which makes it perfect for invading sneak attacks.

Of course, there are downsides to the Sacred Spear. Mainly that the Weapon Skill can simply be avoided by moving away from you, and it can also be dodged through. This leaves you open to ranged damage while casting the Skill, so use it carefully. 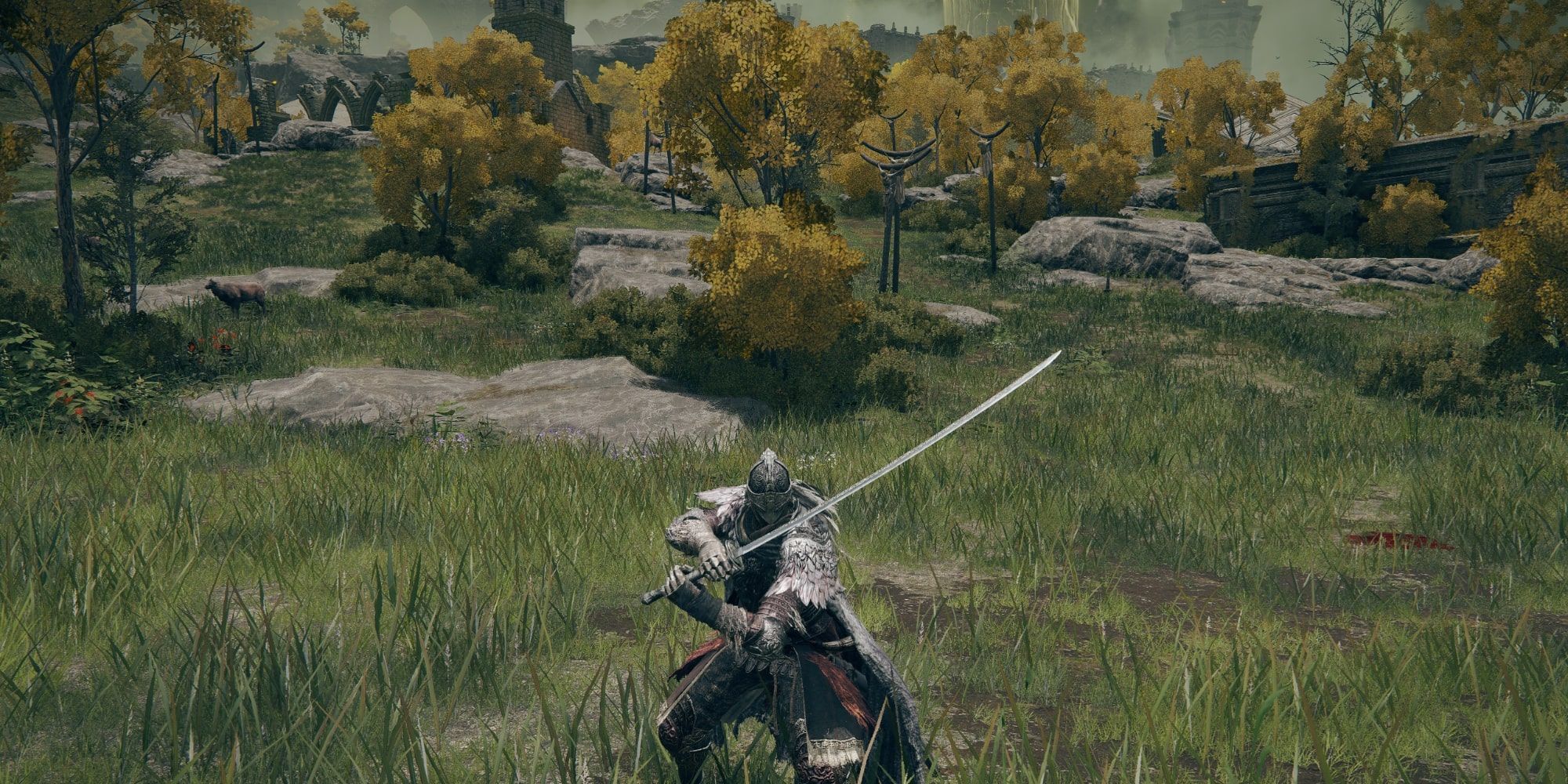 Katanas are really powerful in Elden Ring, though maybe that has always been the case in Souls games. For their very fast speed, they deal super high damage. The Moonveil even deals magic damage, which means it deals decent damage through shields. The true value of Moonveil is found in its Weapon Skill.

The Weapon Skill on the Moonveil allows you to fire off lasers at your enemies with very little windup, making it very good for surprise attacks while being chased or after being cornered by invaders. And they hit really hard, potentially one-shotting players with low overall health. 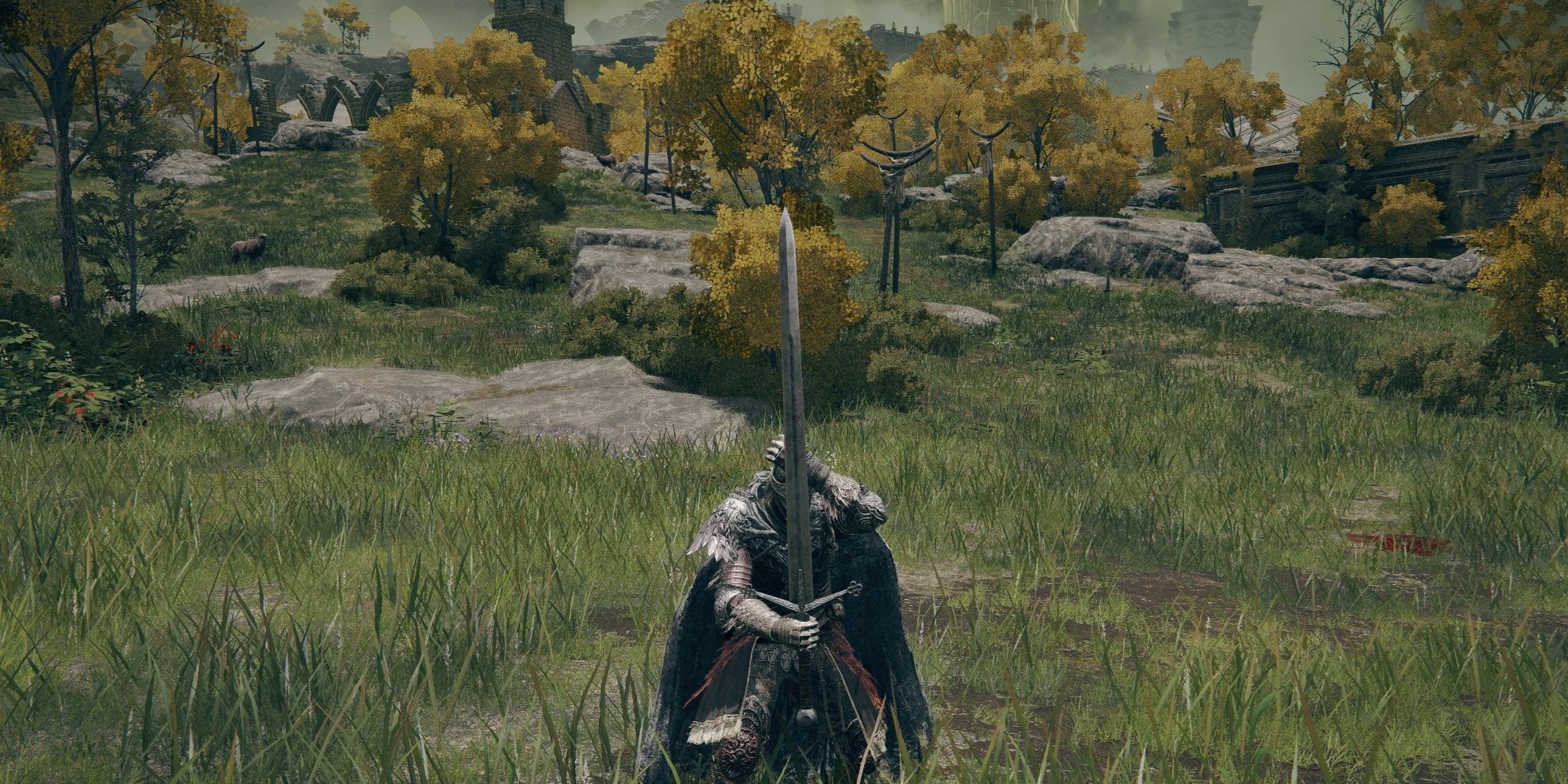 Most of the Colossal Swords in Elden Ring are difficult to use in PvP, due to the way that hit-detection works in Souls PvP. This also applies to most of the Greatswords, but the Claymore is an excellent weapon for PvP with its Heavy Attack.

Unlike the other Greatswords, the Claymore features a poke for its Heavy Attack, which makes it very good at catching players who are attempting to roll away from you. Combine this with higher damage than other weapons, due to its size, and you have an excellent PvP contender. 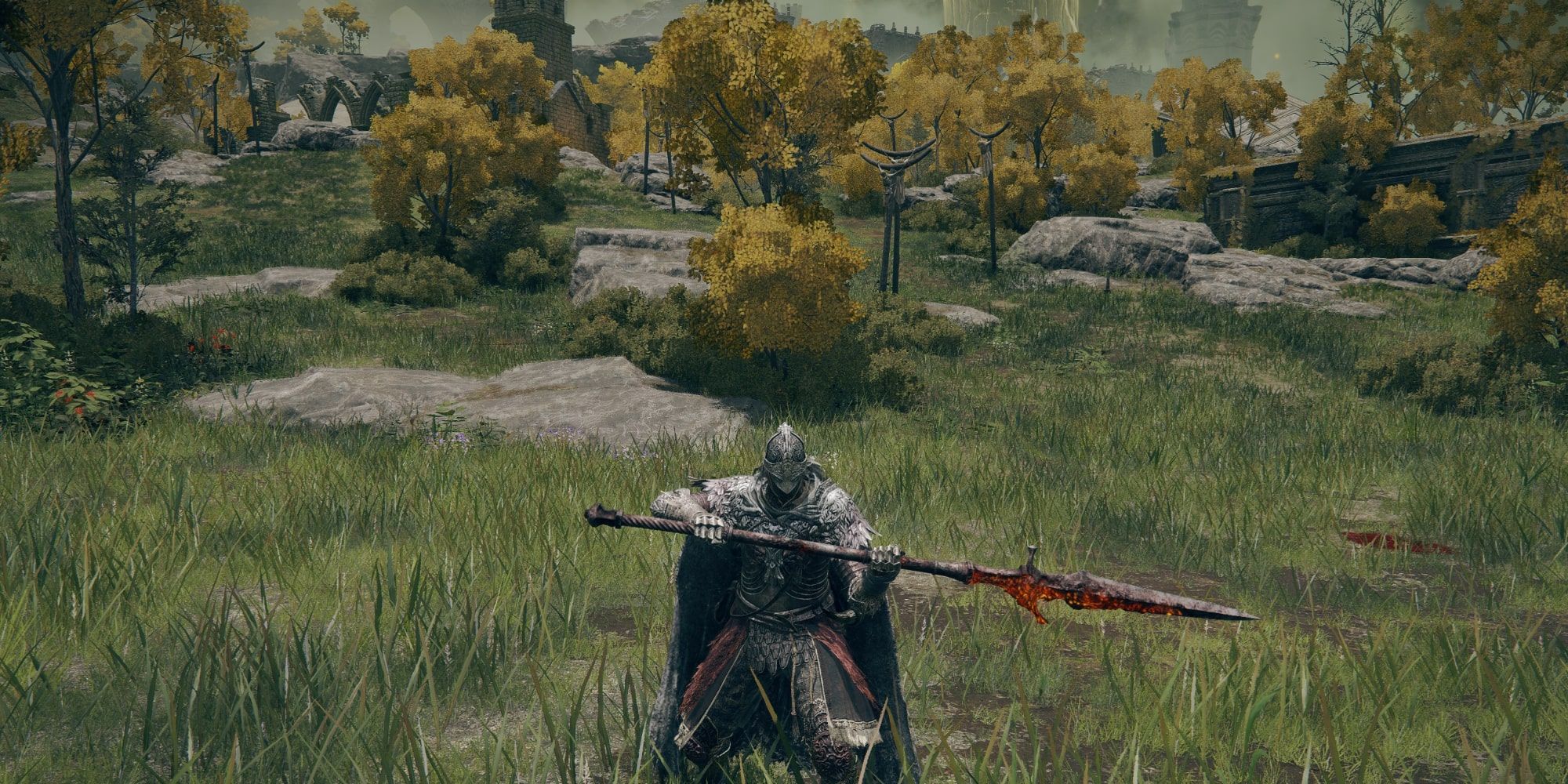 The Great Spear class of weapons in Elden Ring feels like it was made for PvP. Not only are they high damage, but their range is also massive, with the only downside being their somewhat slow attack speed. Vyke's War Spear is the top Great Spear because it causes madness to build up.

Its Weapon Skill is good too, as it lays down fire over a wide area in front of you that causes madness to build up in enemies, but beware backstabs since you will be stuck in the animation for a while. Overall a great choice for PvP, Vyke's War Spear is great for catching players who panic roll after being charged at. 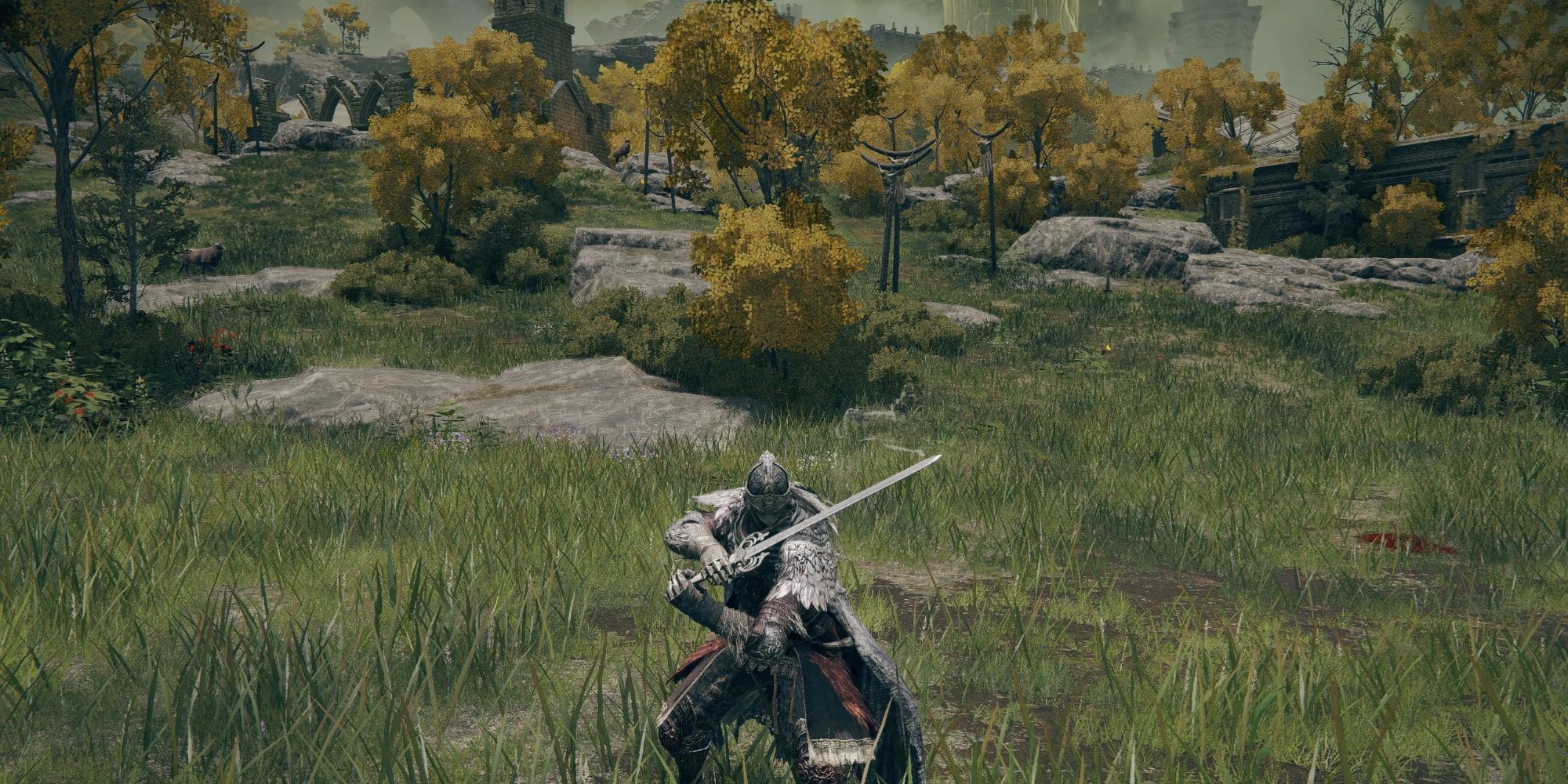 One thing that is true for most things in life is that two is better than one, and the Sword of St Trina exemplifies that to the max. The first of two weapons in Elden Ring that deal the sleep status effect, the other being a torch, using two of the swords will put other players to sleep in only a couple of hits.

This leaves them open for massive damage, and it can be made even more effective by using the Weapon Skill to coat your swords in even more sleep status. A good tip is to equip a heavy weapon in another slot that you can then switch to when your opponent sleeps to absolutely crush them. 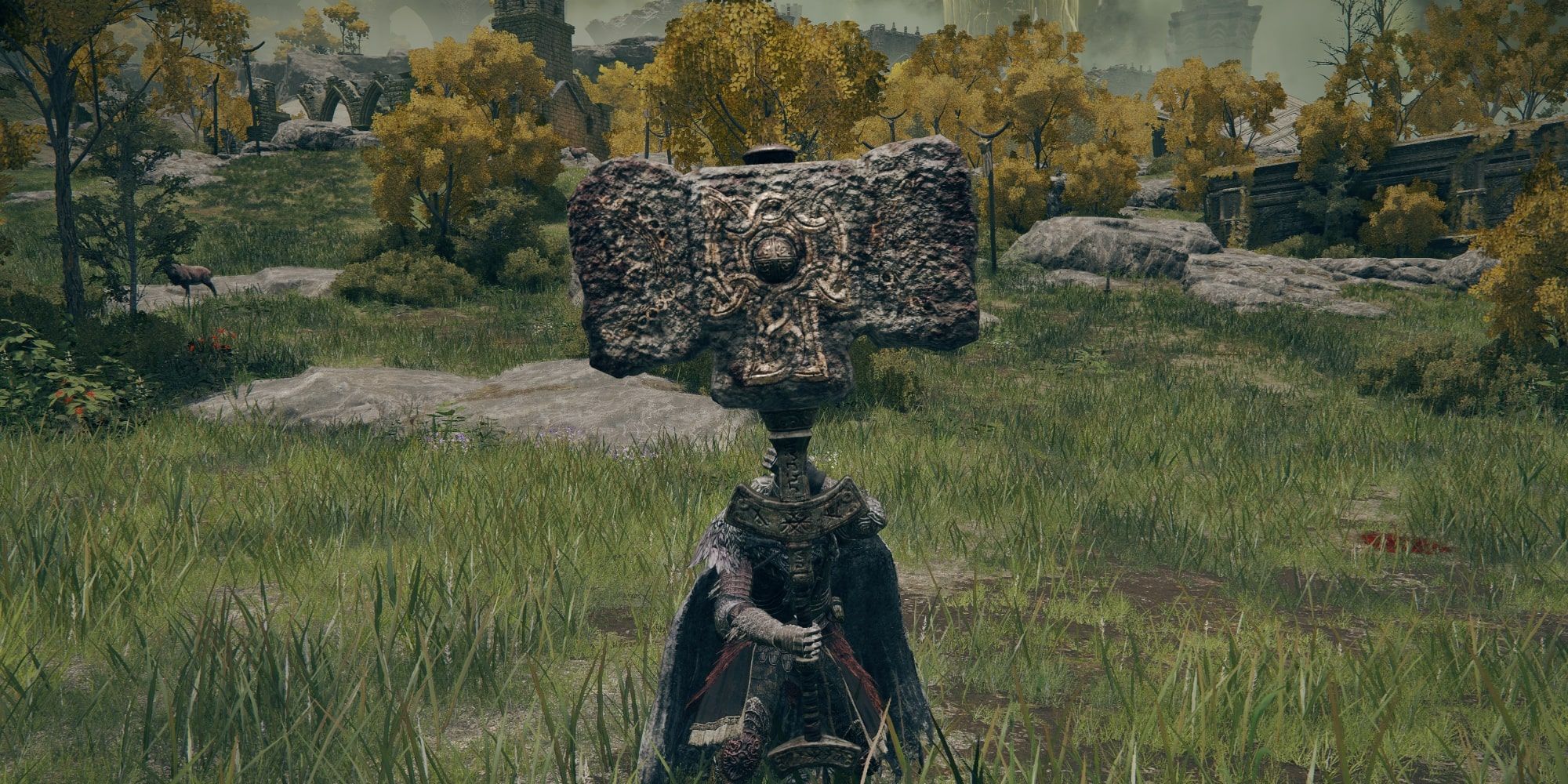 As stated earlier, it is very difficult to use Colossal Weapons effectively in Elden Ring PvP. That is not to say it is impossible however, and the Giant-Crusher is the one to use if you choose to go with this class of weapon. The problem with them is their extremely slow attack speed, but the high damage is very substantial.

It is recommended to use the heavy enchantment as well to further increase damage. It is good to remember that jumping Heavy Attacks are always a good choice in PvP as they have very little windup and can surprise foes that have bad timing. 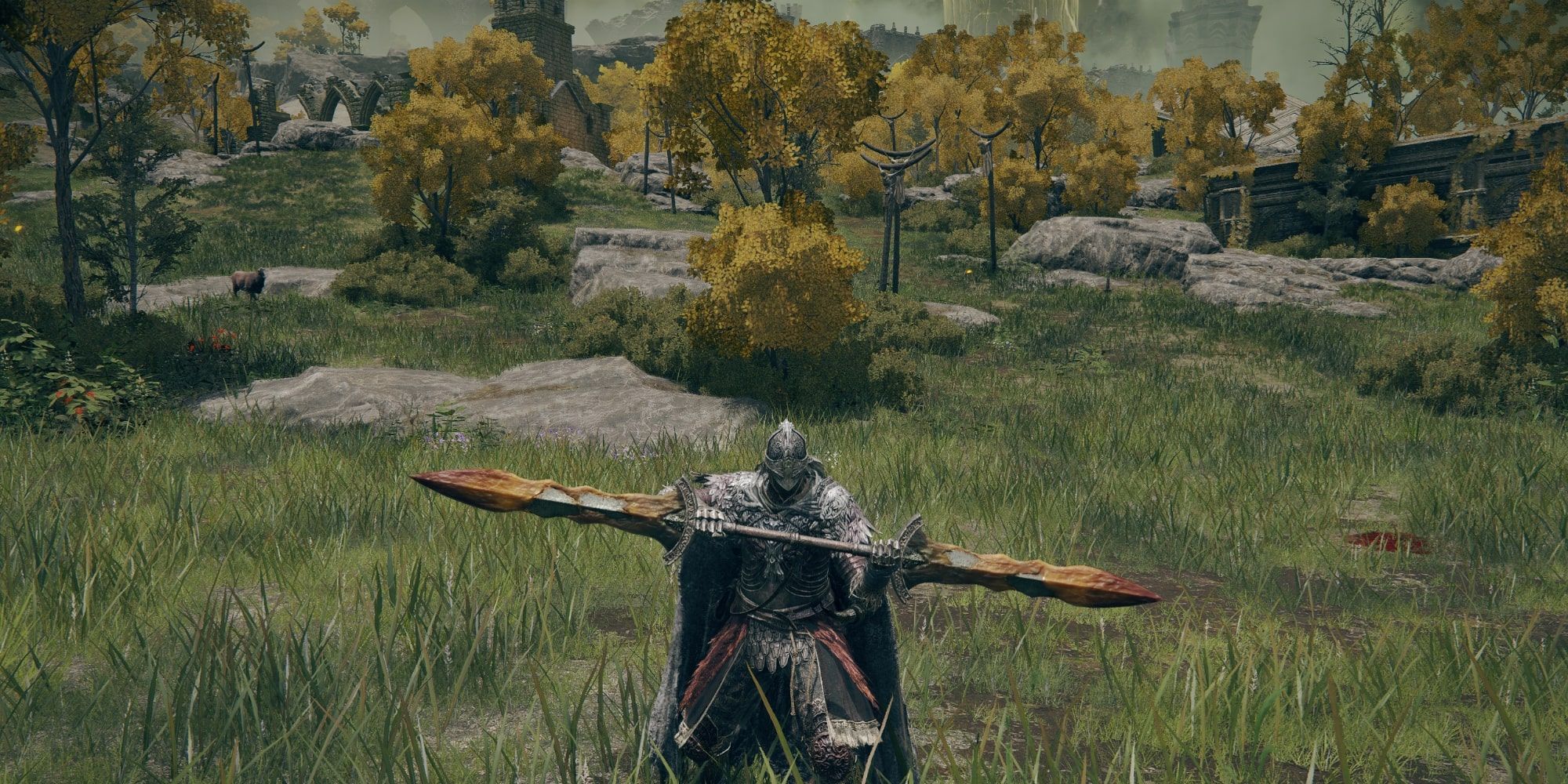 Another weapon that excels when dual-wielded, the Gargoyle's Twinblade – or any twinblade for that matter – has one of the best movesets in Elden Ring for PvP. An excellent combo of high attack speed and medium damage, when dual-wielding this efficiency reaches maximum levels with twinblades.

The jumping attack with the dual twinblades deals significant damage too, and this can be combined with the status effect of your choice to yield even higher damage. The Gargoyle's Twinblade stands above some others due to its great all around scaling, even without changing the enchantment. 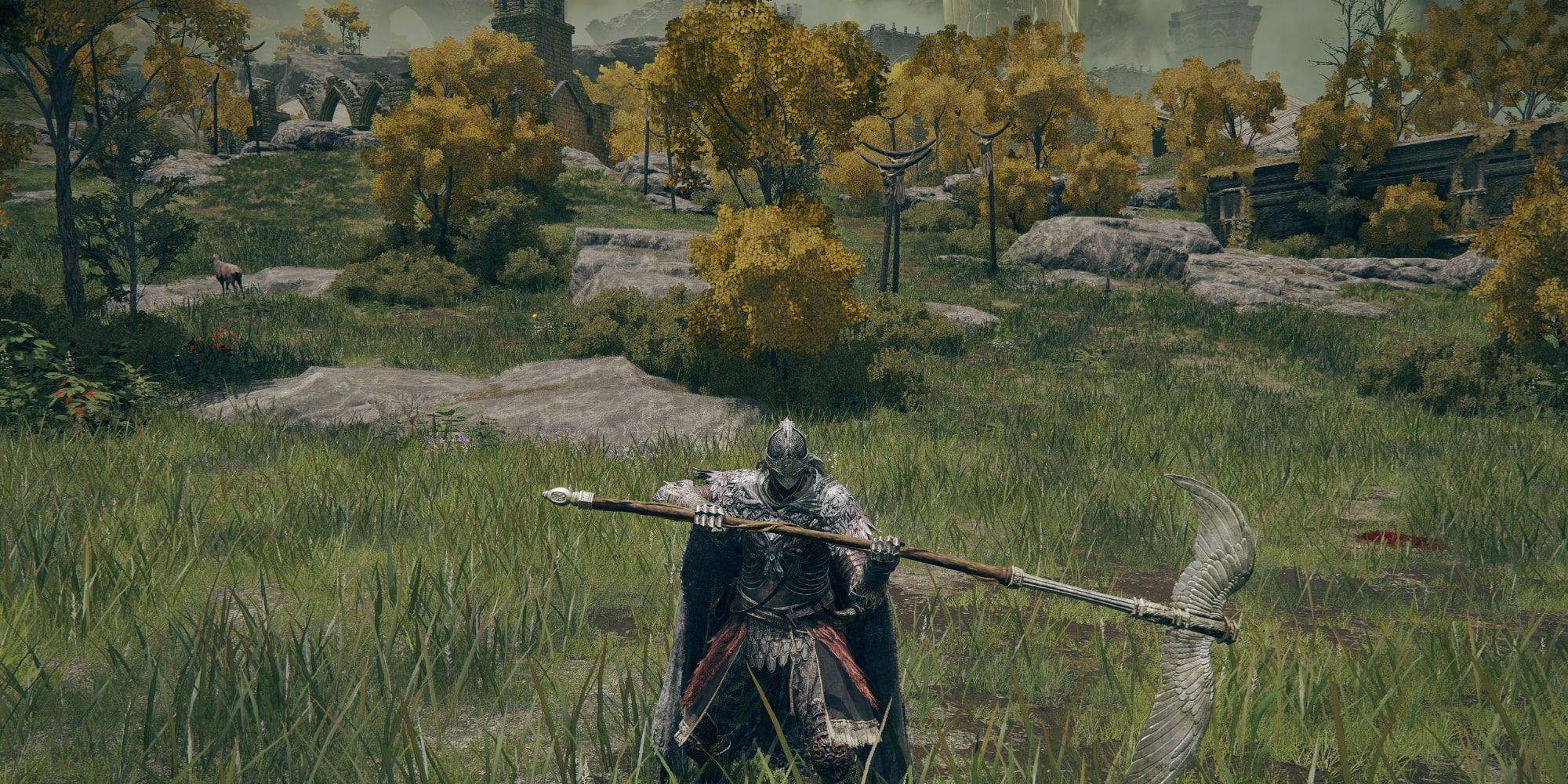 Reapers are another class of weapons in Elden Ring that are very dangerous in PvP. A good balance between stagger potential, speed, and damage, all of them also cause blood loss buildup which is really powerful in Elden Ring. Unsurprisingly, the Winged Scythe makes its way to the top of the rest by having a standout Weapon Skill.

When activated, you jump in the air and attack twice, but if you catch the opponent with either of these blows, they will be unable to heal for short time. This gives you the opportunity to push them and potentially close a battle that could have dragged on much longer if they kept healing. 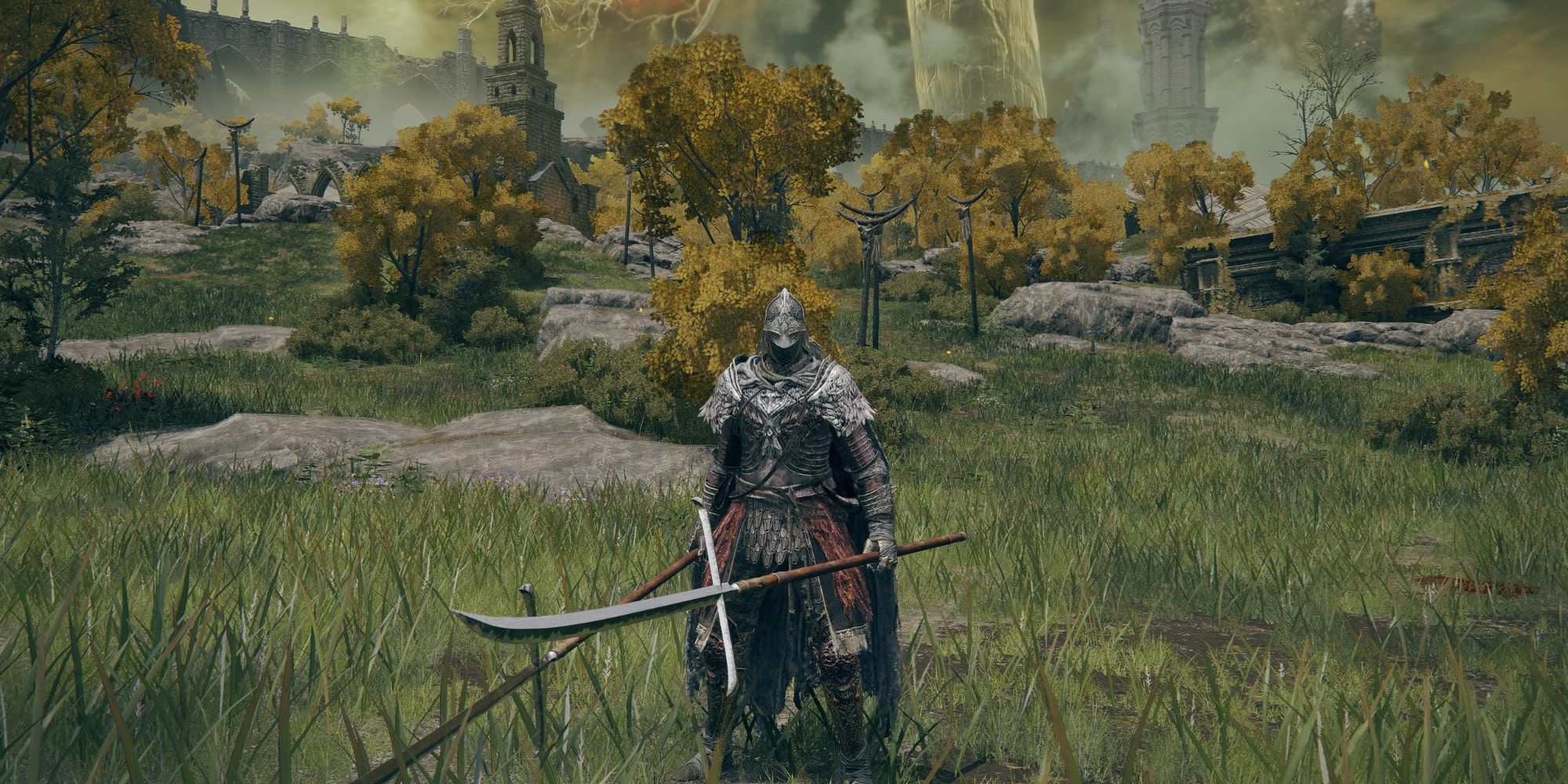 The Cross-Naginata, when dual-wielded and enchanted with blood loss, is a killing-machine. Combine that with the Seppuku Ash of War, and you have what is potentially an instant bleed on your very first attack. Add in the fast attack speed since it is a spear, and the Cross-Naginata might just be the best weapon for PvP in Elden Ring.

There are no weapons in Elden Ring that are perfect, but in this case the Cross-Naginata is pretty close, at least in PvP. Take these with you when going against a group of three and just watch the host panic as you instantly turn their three vs. one into a fair fight.