The vibrant world of Enter The Gungeon wouldn't be nearly as interesting without the extensive cast of NPCs (non-player characters). Most of them can be found behind bars somewhere along a Gungeon run, and will need rescuing in order to interact with them.

Some are intrinsically part of the Gungeon experience, having been trapped here much longer than the player. Here are the best NPCs to find, unlock, and chat to. 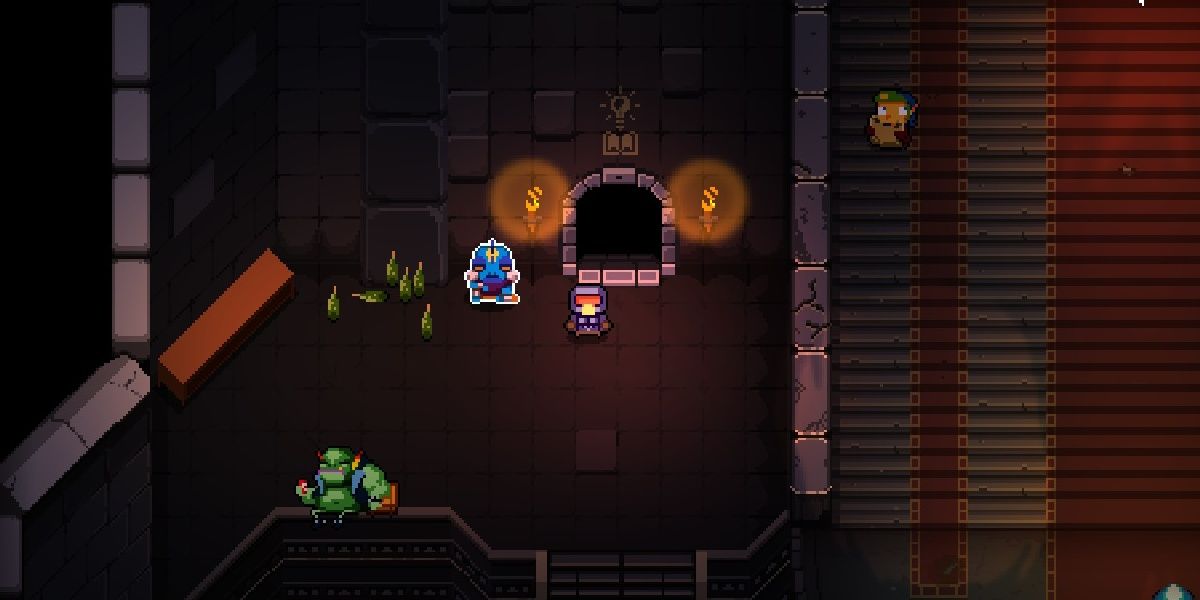 The Drunkard won't sell you anything, and they won't unlock fun challenge runs either. But, they are a very realistic impression of what this dungeon is and how you are just another naive warrior, bound to be defeated and trapped there forever. From the start of the game the Drunkard can be found drinking outside of Ser Manuel's Halls and wallowing in self pity.

Once you have made some advancements through the dungeon the Drunkard might have some lore to pass on, revealing connections and backgrounds that most other roguelike shooters don't possess. The Drunkard is a reference to the Crestfallen Warrior in Dark Souls, and adds a nitty gritty layer to this tongue-in-cheek game. 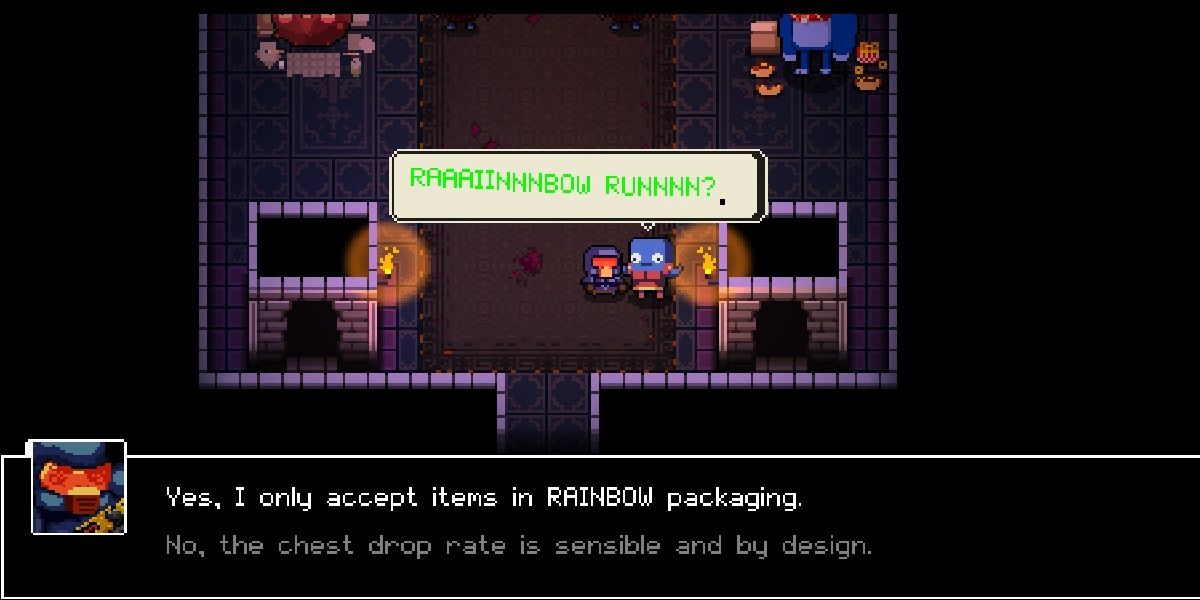 In stark comparison, Bowler is just so excited to be here, and to share his wacky rainbow-colored game mode with you. This challenge was created by Retromation the Gungeon speed-runner, and was later added to the official game in the A Farewell To Arms update. You may refer to him as Bowbow, Rainbuddy or the Rain Train, toot toot.

Bowler is endlessly upbeat, and doesn't seem to care he's trapped in a moving labyrinth of Gundead. Upon activating his Rainbow Run you'll find him sitting on top of all regular chests within the Gungeon, and he will leave happy little notes when he's taken boring normal loot. A rainbow chest will spawn at the start of each floor, but only one thing can be taken from the selection out of eight. Some of these will be S or A tier too, so keep an eye out for the best guns. 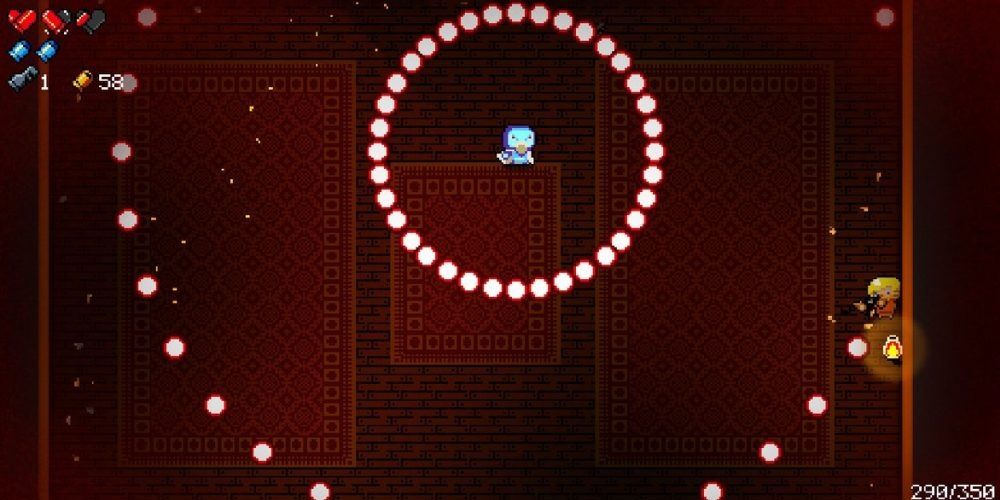 Every game needs a tutorial and Enter The Gungeon is no different. Well, it is a bit. This wisened old ghost of a guide has a whole backstory, a good friend turned archnemesis, and a mini redemption arc. If you need a reminder after already playing the tutorial he will snarkily ask if you have forgotten how to play the game, and then wearily show you the ropes again.

The Halls of Knowledge he resides in have a secret room to find, starting a quest for revenge and eventually having Ser Manuel show up on your runs dressed as an owl. Ghosts need a hobby too, you know?

Arguably the most important NPC that needs saving, the Blacksmith is central to defeating the game and understanding what needs to be done. She can be found in the usual jail cells throughout the Gungeon, and thereafter in the fiery Forge, tinkering with the Unfinished Gun. It's revealed through speaking to other NPCs that her father, Edwin, and her sister, Cadence, lived in the Gungeon along with the Gun Wizard prior to the Great Bullet falling.

Her shop on the lowest floor can sell S and A tier items and guns, and bringing the pieces of the Bullet That Can Kill The Past is necessary to completing most of the game. This is also where Ox's missing arm can be found, making it possible to unlock the Clone item.

A surprisingly integral resident of the Gungeon, the Resourceful Rat is a lot more keyed in than most would think. Sure, he steals anything you don't pick up immediately, and leaves behind a cutting retort, but if you find your way to his lair there is a whole lot more than a simple thief. None of the other NPCs could tell you how long the Rat has been here, and the items he's collected from countless Gungeoneers' runs have resulted in a real tough boss to crack.

His favored weapon being…cheese, somehow, he's mastered the Gungeon and made it bend to his will. Don't bother trying to get revenge though, below the Oubliette you'll find a labyrinth you won't be likely to beat without a set of instructions handily left behind by the Rat himself.

Synergrace is a matchmaking expert with extensive knowledge of every possible synergy in the game. As more items are unlocked she complains that as the catalogue increases it becomes more difficult to learn all the combinations. Despite her name, job and basically her entire shtick, Synergrace is not guaranteed to provide you with a synergy. Once rescued she will appear randomly during Gungeon runs, and never in the Breach, which she says is getting overcrowded.

If any of gear you are holding has a possible synergy she will sell you a Synergy Chest. These can be glitched, and if a Rainbow Run is enabled it will be empty. It seems a bit of a scam that a lot of these expensive chests won't even provide a synergy, and instead act just like any other chest in the Gungeon.

There are a lot of Dungeons and Dragons references in Enter the Gungeon, and here is another paying homage to the extensive franchise. Daisuke (pronounced DIE-SOO-KEH) is a twenty-sided die introduced to make sure you have a bad time. Only after the Dragun has been defeated once will you have the opportunity to come across Daisuke in a jail cell. In the north-eastern Breach room this charming little fellow will encourage you to roll the dice and enter Challenge Mode.

A M.A.S.H tent is a welcome sight for sore eyes down in the Gungeon, even if their techniques aren't entirely moral. Patches (wearing a clown nose) and Mendy are sisters that can spawn in a special room on any floor in the Gungeon. If you are below max health they will smash a bottle over your head, releasing a fairy and bringing them up to full HP.

The use of a bottled fairy is a reference to the Legend of Zelda franchise, and upon a successful treatment Mendy will exclaim "Take that, HM Academy!" which is a real life Health Management network of medical experts. It seems that the leading specialists don't necessarily agree with living magical creatures getting pulverized in the name of science.

A really unique transaction is available upon unlocking the Vampire. In return for half a heart she will pay you 20 shells multiplied by the relevant floor price multiplier. This can be done all the way until tyou are left at half a heart, when she will decline your offer. She's not a murderer after all.

In fact, she hints at her medical background after visitng her once, stating that she "sunk her teeth into medicine". Maybe Patches and Mendy have a long lost sister, who is somehow part vampire and part werewolf. There's a lot to unpack here. There's even a chance the Blood Shrine active will be applied to you, which is neat. 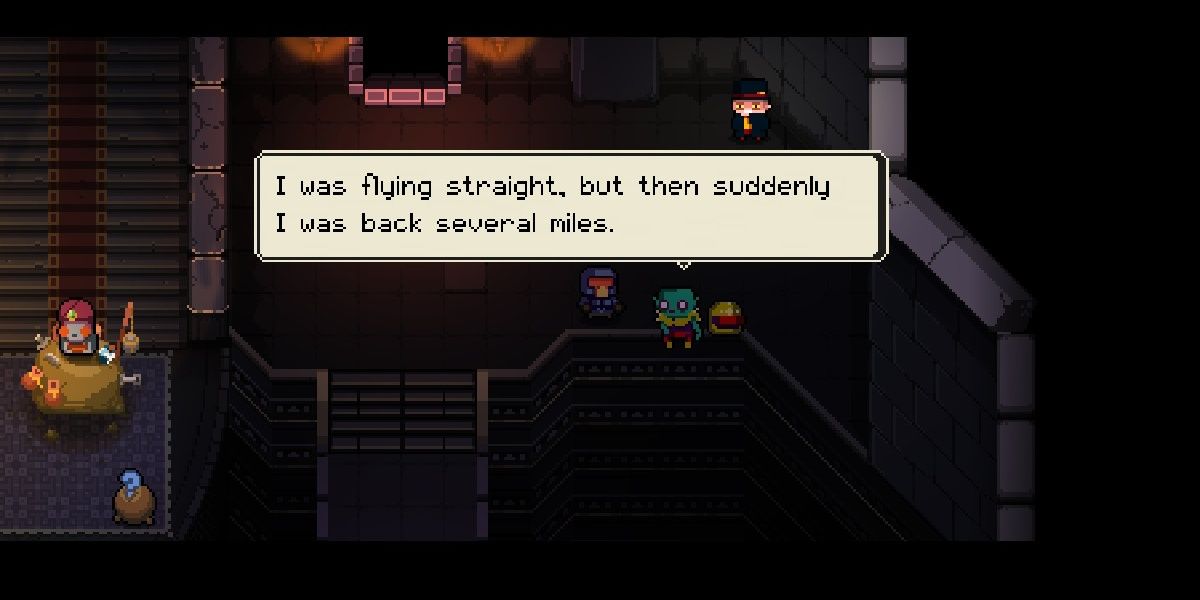 Loblina is a fellow adventurer sitting on a ledge at the south eastern side of the Breach, dangling her feet and taking a break. If you interact with her helmet it will clatter into the darkness below, and earn you an eye roll from the goblin. Each time this fun little game happens she loses more and more of her patience, as she has to wander back down into the Gungeon to find her armor again.

She is so grateful the first time you free her. She also appreciates the help the second time you get her out of prison. However, she's pretty tired of seeing your face by the third time you come across her. Kick her helmet into the abyss once more and you've made an enemy for life.

Loblina's story is a sad one, as with most stuck in this cursed place. She didn't mean to enter the dungeon, but got pulled in and is trapped in the loop just like you. If you hadn't kicked her stuff over the ledge you might have been friends.

After four times she knows your intentions and chains her helmet to the floor, meaning she won't ever be found in the Gungeon again. However, this does unlock the Blast Helmet item. Let's hope it was worth it.