As one of the Baltic nations featured in the Lions Of The North expansion for Europa Universalis 4, Denmark has an extensive mission tree and several options on their path to becoming a Great Power.

Denmark's early game can be rocky, as there are many things that can go wrong, but a stalwart Arch-King or Arch-Queen that can weather the storm has the potential to unify Scandinavia and challenge Britain for control of the seas! If you plan to lead the Danes to glory over the game's four-hundred-year campaign, these tips will help you get started. 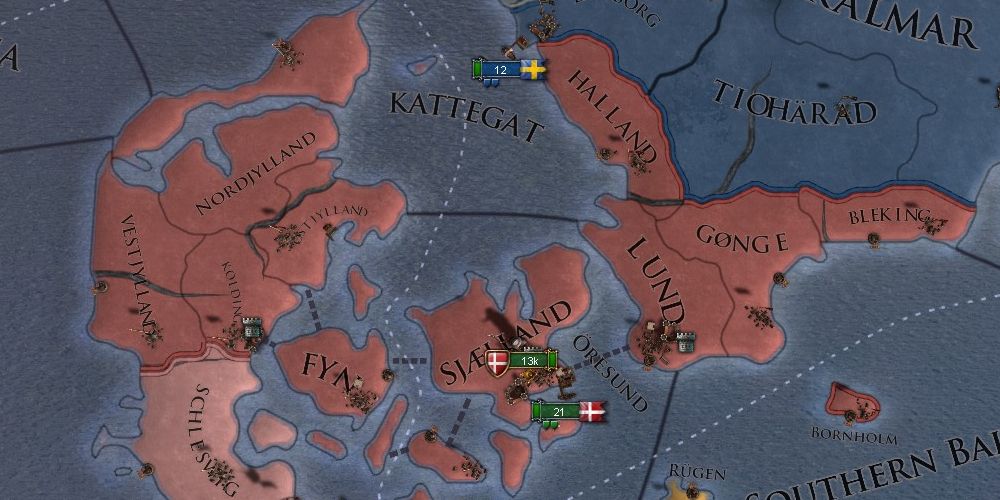 Denmark starts the game controlling all sea traffic between the North Sea and the Baltic. This allows them to skim off any trade coming from the east before it reaches the English Channel. Much of Denmark's core territory also consists of islands, giving them natural advantages when defending. Their capital, the city of Kobenhavn in the Sjaelland province, starts with a Castle and the Kronborg wonder, making an invasion of Denmark a daunting prospect.

Denmark also starts the game with three subjects; Norway and Sweden via a Personal Union enforce by the Treaty of Kalmar, and Holstein as a direct vassal. Having so many subjects lets Denmark punch well above their weight, but if their loyalty starts to falter you could be in big trouble. This, combined with Denmark's monarch starting with the Infertile trait, means you're very likely to have a succession crisis on your hands when Arch-King Christopher dies.

As the game progresses, Denmark's National Ideas give it significant bonuses to trade, naval combat, and subjects. As such, Denmark's ultimate goal should be to supplant Britain as Europe's chief naval power and taking control of the English Channel trade node. From there, they'll have the money, power, and prestige to do whatever they'd like. 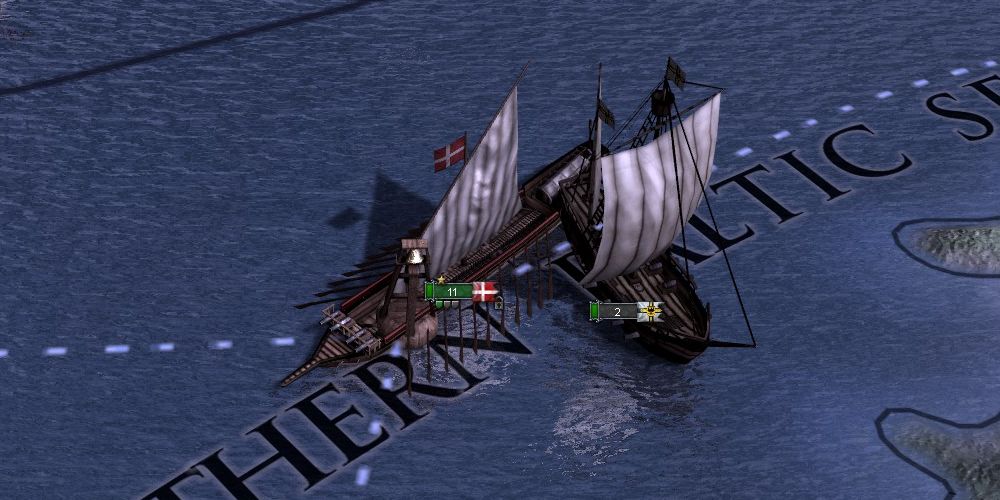 Denmark's mission tree allows for some early bonuses if you're bold enough to take them. Gotland should be annexed as soon as possible, as doing so will give you a permanent claim on Lübeck by completing the Retake Gotland mission. Even if you don't want to tangle with the Holy Roman Empire just yet, the claim will make it easier to expand southward when the time comes.

You should be able to take Gotland easily with your starting military – make sure you have an Admiral assigned to your fleet, since their naval strength is similar to your own.

Whatever you do, don't allow Gotland to get a powerful ally such as Poland. Declare war as soon as you're able in order to prevent this.

While you're conquering Gotland, build up your military, especially your land forces. Sweden will be quick to rebel if their army size gets much larger than your own, so you need to keep pace with them or risk an independence war. You can also complete the Expand The Military mission, which gets you a free admiral and claims across the Baltic.

Avoid a Royal Marriage with France or any other powerful nation until a legitimate heir has been secured. Don't give them an opportunity to claim your throne!

Since Royal Marriages help speed up getting an heir, consider establishing ties with Scotland in that regard. You both have a common enemy in England, but they'll have trouble forcing a union if Arch-King Christopher dies early.

As Denmark, a good early goal is to reduce the influence of the Nobility while building up the influence and support of the Clergy. If you have the backing of the Clergy and high enough relations with the Papal State, you can found the University of Kobenhavn via your mission tree. Curtailing the nobility helps reclaim crown lands and also sets you up for Danish Absolutism down the road, strengthening your government 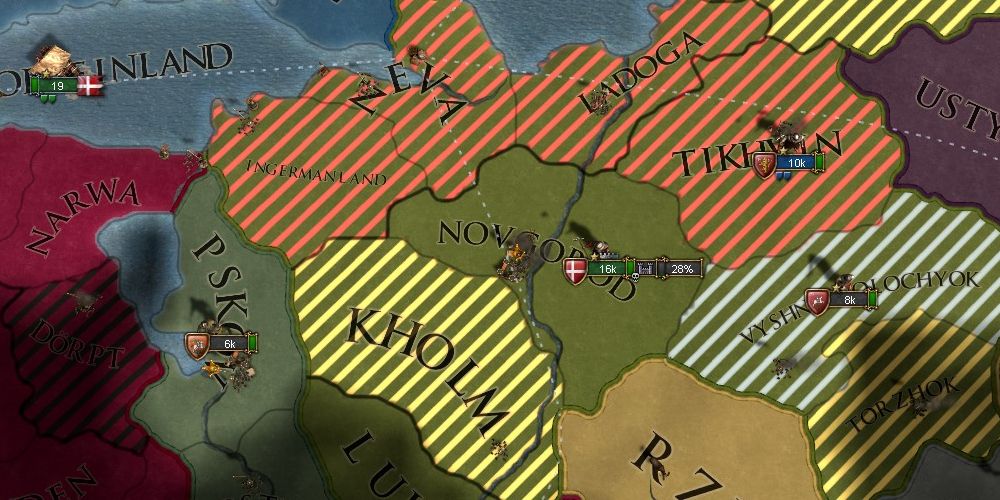 Once you've gotten your claims on the Baltic coast, invade Riga to establish a foothold there. You can also declare Novgorod as a rival and win a quick war against them with the Humiliate Rival casus belli to earn yourself more Splendor and Power Projection. Ideally, you want to grab up as much of the region as you can before Muscovy does.

Allying with Poland, Lithuania, or the Teutonic Order can make your wars in the east much easier, since Sweden and Norway won't have quite enough punch to make up for Muscovy's superior numbers.

How To Keep Sweden From Rebelling 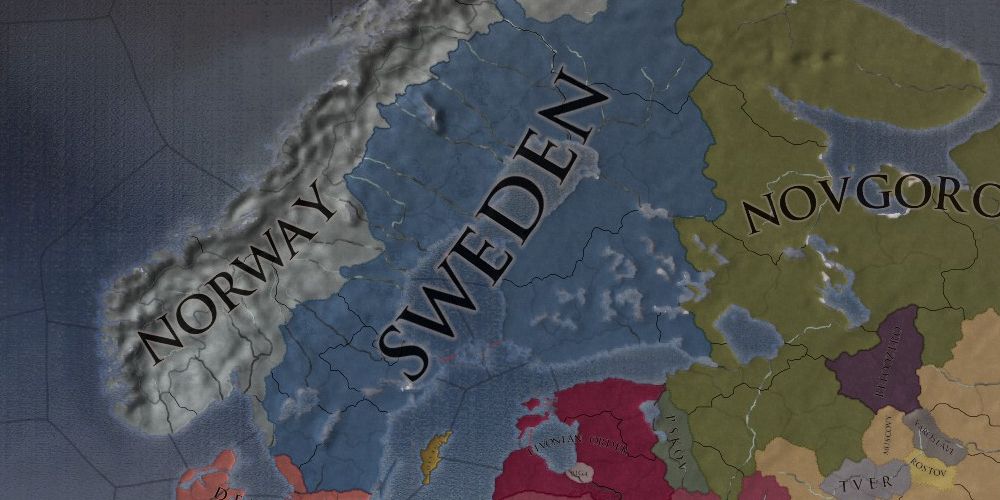 Norway is pretty content with the Kalmar Union at the start of the game, but Sweden is another story. Not only do they have more land and money than Denmark, but they also get several early-game events that automatically increase their Liberty Desire. If you're not very careful in how you deal with Sweden, they can quickly declare an independence war and slip from your grasp.

As stated before, it's important to keep pace with Sweden's military growth. This is easier said than done, since their economic base and force limits are higher than yours. Consider having a diplomat in Stockholm at all times to improve relations. If push comes to shove, you can use the Promote Loyalists interaction from the Subjects Tab, eroding their Liberty Desire for a monthly payment.

Denmark has two early missions, one each for Norway and Sweden, that let you set a policy toward them. You can greatly enhance their economy, making them stronger subjects but more able to rebel, or debilitate them, which will make them less content but also less able to do anything about it.

Alternately, you can maintain the current status quo for a lump sum of Monarch Power.

Unlike Norway, Sweden will constantly receive events that push them toward independence and give them the resources to pull it off. Keep their opinion of Denmark high to reduce the risk of war.

How To Win The Swedish Independence War 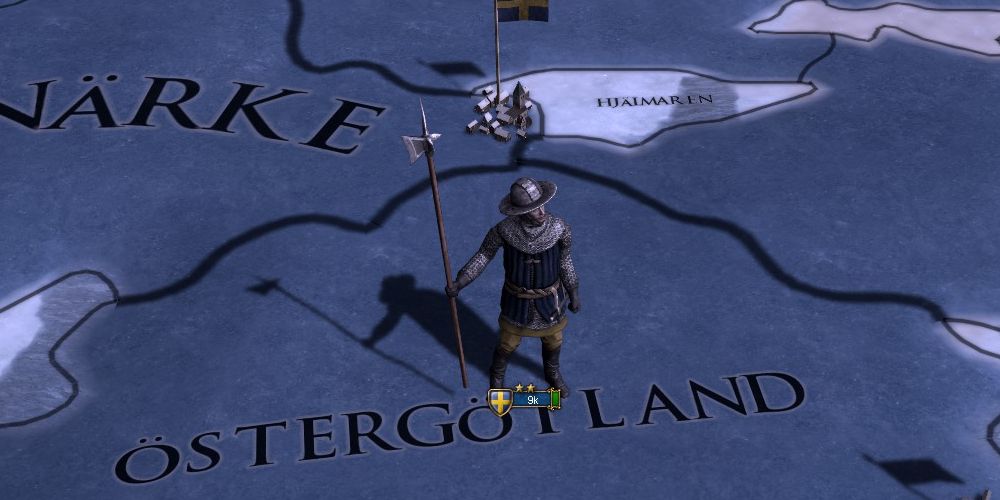 If Sweden does rebel, they're likely to do so early, and with the support of one or more of your rivals – typically some combination of England, Poland, and/or Lithuania. If this happens, stay put and build up your army at Sjaelland. As long as you can keep control of the seas, Sweden can't reach your capital without lots of effort and attrition. Keep their coasts blockaded and wait for their allies to be distracted by the Hundred Years War, Muscovy, or the Ottomans.

If the English navy appears, only engage them if they enter the Baltic. Your galleys are no match for England's heavy ships on open sea, so you need to meet them in waters where you have a fighting chance. Once you've inflicted losses on your foes by playing defensively, march north and take Kalmar, followed by Stockholm. As long as you can hold Stockholm, you'll be able to build up enough war score to force Sweden's surrender. 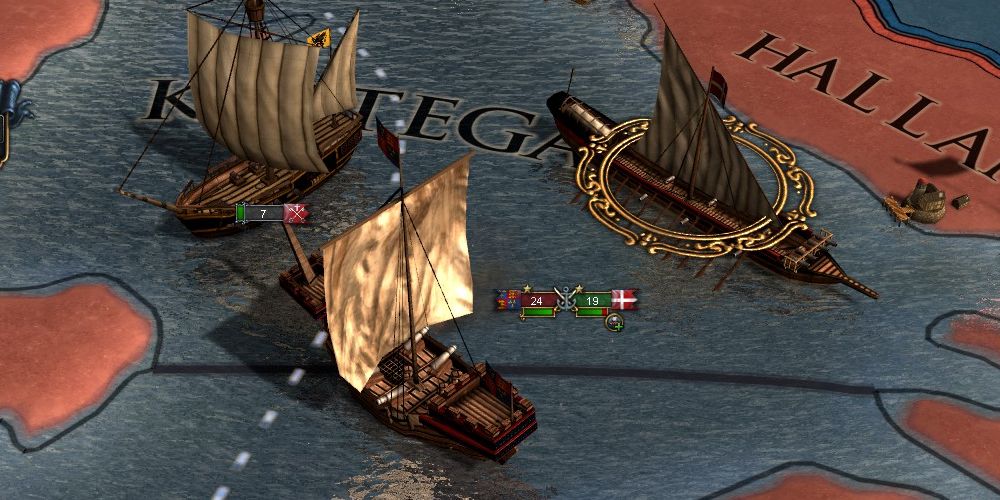 England has several events early in the game that can give you opportunities to strike; declare them as a rival and watch for events like the Hundred Years' War or the Wars Of The Roses. Also keep an eye on their leader, as England becomes much more of a threat once their starting ruler dies.

Once you've rivaled England, issue an embargo to claim the Rivalry With England mission reward. This makes your ships cheaper and faster to build for thirty years, which you can use to build up a fleet capable of establishing your dominance over the Baltic or driving England from their own channel. Going after England early is riskier than focusing on your home region, but reaps much greater rewards in terms of land and money.

Once you've taken a few provinces in England, release them as vassals. Northumberland has cores right where you'll probably make landfall, so they're a perfect candidate. and this way you don't have to manage the territory yourself. Denmark excels at getting the most out of their subjects, so you'll see extra tribute income as well!

If you decide to create Northumberland as a vassal state, consider keeping them around instead of annexing them once your conquest of Britain is complete. They get a ten percent bonus to goods produced when their National Idea tree is completed, so putting them in charge of an industrialized Britain further increases the already-incredible value of the English Channel trade node.