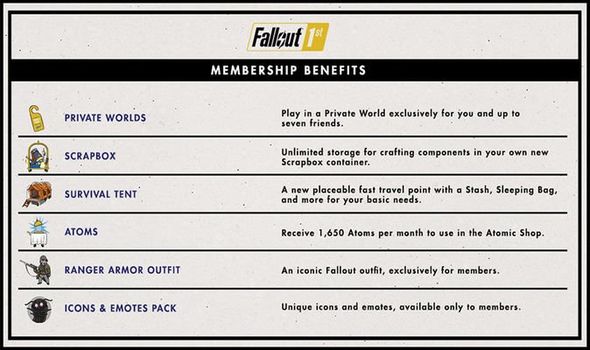 Already a controversial product, a new Fallout 76 update is being released today that adds something fans are already talking about.

Following the current server maintenance, Bethesda will be launching Fallout 1st, a premium membership that brings private servers to the game, among other features.

Bethesda has confirmed that the Survival Tent and Scrapbox (Unlimited Storage) can be used in both public and private worlds by Fallout 1st members. They have also indicated that private servers will eventually receive mod support.

“Fallout 1st will be available as a one-month membership, or you can purchase a yearly membership for a 36% discount over the monthly rate as shown on our website,” a message from Bethesda explains.

“If you cancel your membership or it expires, you’ll still be able to access any Atoms received as well as the resources stored in your Scrapbox. Cancellation will be effective at the end of your then-current membership term.”

You can read more about the new Fallout Subscription service below, with Bethesda given an in-depth breakdown on some of the bonuses included:

How you use your private world is completely up to you: Invite up to seven of your friends at a time (eight total people per private world) to join you in taking on the dangers of post-apocalyptic West Virginia, or play completely solo. All gameplay remains the same from Adventure Mode and all characters entering the Fallout 1st private worlds must be existing characters.

Private worlds will continue to evolve with new features such as expanded building areas, increased C.A.M.P. budgets and Workshop persistence. We’ve also received a lot of questions about playing Fallout 76 with mods and this, too, is something we’re excited to add to private worlds in the future.

As a member of Fallout 1st, you also gain access to your own private Scrapbox. Use the Scrapbox to store all your crafting components so they aren’t taking up space in your Stash Box. The Scrapbox has unlimited storage, so no need to worry about picking and choosing when it comes to hoarding scrap.

Drop the new Survival Tent to quickly set up a forward operating base when you’re roughing it out in the wilderness during your next adventure. The Survival Tent comes complete with a Stash, Sleeping Bag, Scrapbox, Cooking Station, and even an instrument to help you wind down after a day of exploring Appalachia. Once placed, it will also act as a second fast travel point in addition your main C.A.M.P., giving you even more freedom to travel anywhere in the map without spending caps! You’ll be able to deploy your Survival Tent from your Favorites wheel.

Show off your membership status with a set of unique Fallout 1st player icons and emotes.

(The Ranger Armor Outfit, player icons and emotes must be claimed from the Atomic Shop while your Fallout 1st membership is active. If you cancel your membership after claiming them, you will still have access to them.)