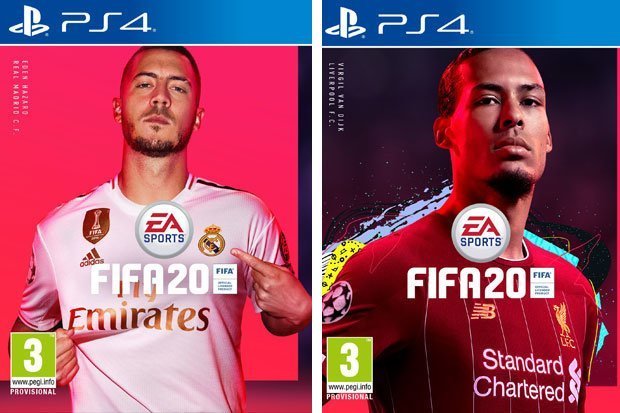 The Belgium superstar is joined by Liverpool FC’s Virgil van Dijk as the cover of the FIFA 20 Champions Edition.

A move no doubt aided by Liverpool’s decision to terminate their long-running relationship with FIFA rival, Pro Evolution Soccer.

“EA SPORTS FIFA is the biggest Football game on the planet, and I have been playing it for years against my brothers,” said Eden Hazard.

“I am lucky to have been on the cover before but to be on FIFA 20 globally is amazing and I hope to excite as many gamers as I do when I take the field for Real Madrid this season!”

The sentiment was also echoed by the dutch Champions league winner van Dijk, who said: “It is a huge honour for me to be on the cover of FIFA 20“

“I’ve been playing FIFA for as long as I can remember and so it’s an extremely proud moment for me to be representing Liverpool FC on the cover of such an iconic game“.

The reveal of Hazard and van Dijk follows the announcement of VOLTA FOOTBALL a new game mode coming to FIFA 20 this year..

This new game mode looks, for all intents and purposes, like a modern-day refresh of FIFA Street.

Of course, you won’t need to buy the game separately but can instead enjoy it alongside the FIFA staples such as Ultimate Team and more.

This is a breaking story, stay tuned for more info as it’s revealed.