Flatfile, a startup developing a platform that analyzes spreadsheets using AI and machine learning, today announced that it has raised $7.6 million in equity financing. The funding coincides with the launch of Concierge, Flatfile’s newest product focused on data onboarding for large enterprises, which launched in private preview earlier this year.

Enterprises regularly engage in the process of data onboarding, which entails ingesting, anonymizing, matching, and distributing a customer’s data. According to IDC, 80% of this data will be unstructured by 2025, meaning it will have attributes that make it challenging to search for and analyze. And it’s expected that this will contribute to the problem of data-underutilization. Forester reports that between 60% and 73% of data within an enterprise is not used for analytics.

Flatfile provides products that focus on solving data onboarding dilemmas. Its Portal platform — which learns over time how data from comma-separated value files, Microsoft Excel spreadsheets, and manually pasted text should be organized — lets users set a target model for validation and match any incoming values. (Flatfile says it sees over 95% accuracy on initial column matches for new users.) Portal offers a validation feature that affords control over how data is formatted and supports functions for in-line transformation, with automatic matching of imported columns. And it is architected to deploy either in the cloud or on-premises, in compliance with regulations, including HIPAA and GDPR. 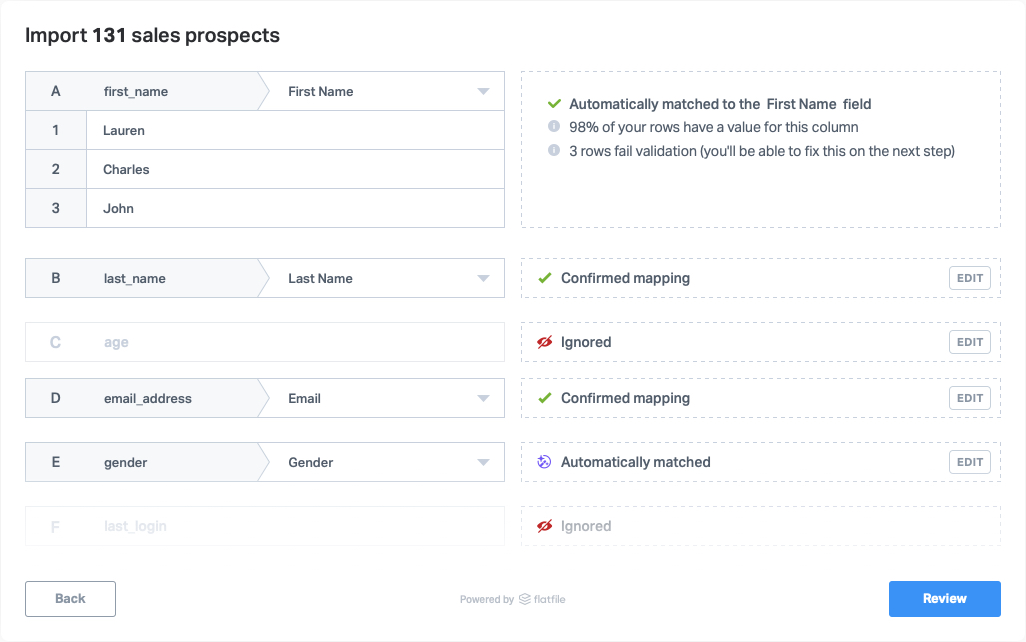 As for Flatfile’s Concierge service, it’s a no-code tool that lets developers set up data models and share and collaborate on imports without passing spreadsheets back and forth. It offers a collated view of all data imports, with details like versions, statuses, owners, and validation errors, along with authenticated login for each collaborator, as well as an approval flow to ensure users retain control over onboarding.

Flatfile has formidable competition in Textract, Amazon’s service that can automatically extract text and data from scanned documents (including those stored in tables), and Cloud Natural Language, Google’s tool that applies the AI used by Google Search and Google Assistant to perform syntax, sentiment, and entity analysis on existing files. Microsoft offers its own data onboarding tool in Form Recognizer, an Azure product that grabs text, key/value pairs, tables, and more from documents.

Flatfile says that in the two years since it launched, it has transformed over 300 million rows of data and 4.5 billion data points for more than 187 companies like ClickUp, Blackbaud, Benevity, Housecall Pro, Hubspot, and Toast. And from the beginning of this year, revenue has increased 5 times as the number of daily end users grows to 2,000.

“Flatfile is solving for the highest friction point in adopting new software,” Flatfile cofounder and CEO David Boskovic told VentureBeat via email. “Moving data to a new product can take months or years for many companies. We’re making it possible for software companies to automate the entire process, driving growth and decreasing lead time on every deal.”

Two Sigma Ventures led the series A round announced this week, with participation from previous investors, including Afore Capital, Designer Fund, and Gradient Ventures (Google’s AI-focused venture fund). This round brings the 14-person Denver, Colorado-based company’s total raised to $9.7 million, following a $2 million seed round in September 2019. Flatfile says it expects to expand its workforce to 30 by the end of the year.