Visoria is the largest region of Athia, and naturally, this means that it has the largest number of Mutants to take on. In Forspoken, Mutants are animals and beasts transformed by the Break into incredibly violent and dangerous monsters with new powers and unbelievable strength and stamina.

For us, the players, this means optional bosses that provide us with heaps of experience, fun challenges, and useful crafting materials. Often, it's best to come back to these monsters later in the game, but by the time you reach Visoria, you should be rather adept at dealing with their individual movesets. 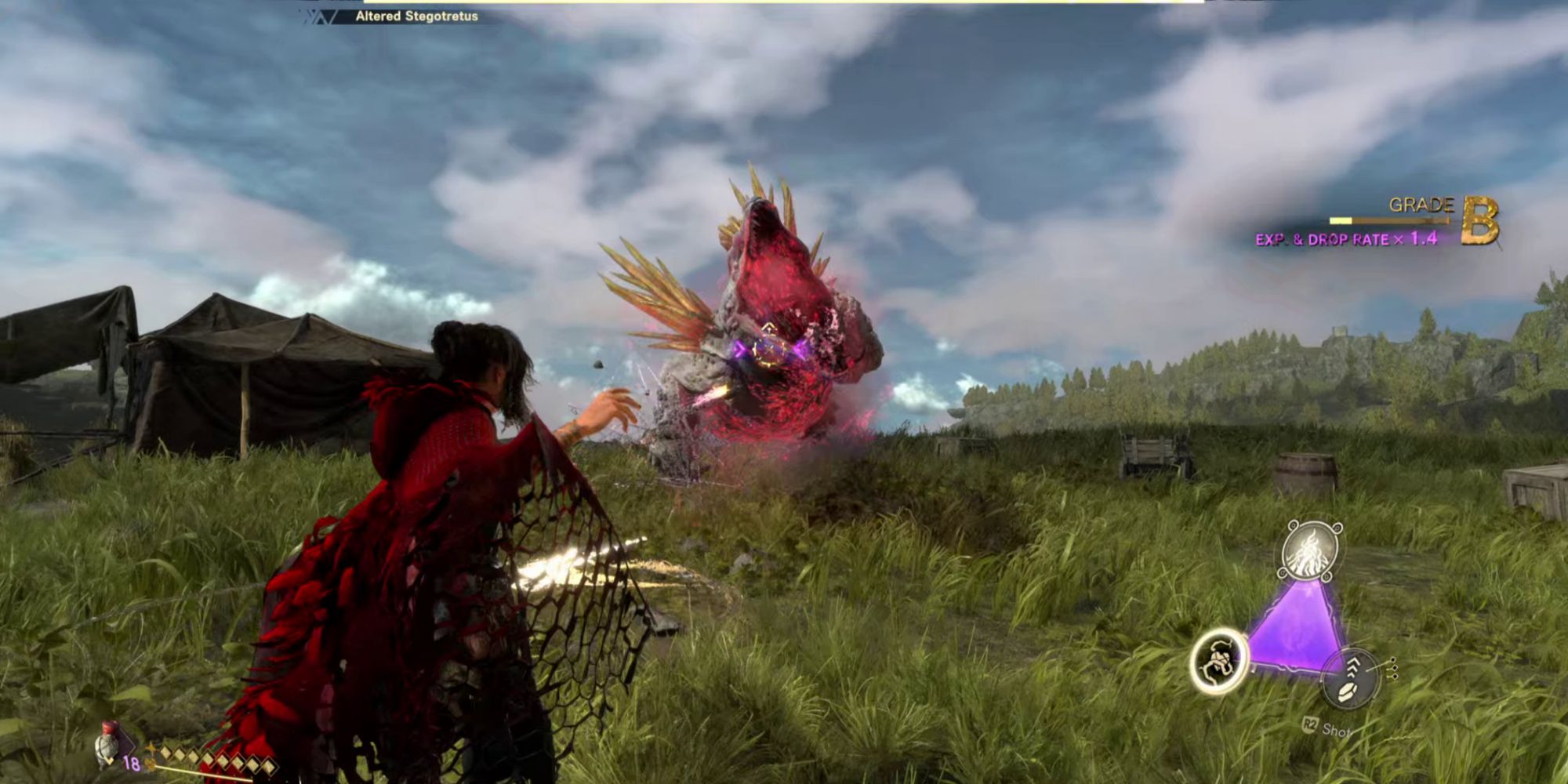 This Mutant is backed up by a group of Milleridae, so you can expect to be dealing with quite a lot of poison in this fight. It's good, then, that the best course of action is to attack with Frey's Magic – this means the Leach spell is easily accessible. Use Leach to heal from poison whenever you get hit.

Deal with the Milleridae first, and then go for the Stegotretus. The fewer distractions you have to deal with, the easier you'll find the fight.

This Mutant is fought in a wide field with few obstacles to deal with, so you should have no trouble running circles around it. Burst Shot will make short work of it, but be wary of its forward leap attack – it comes out extremely quickly. 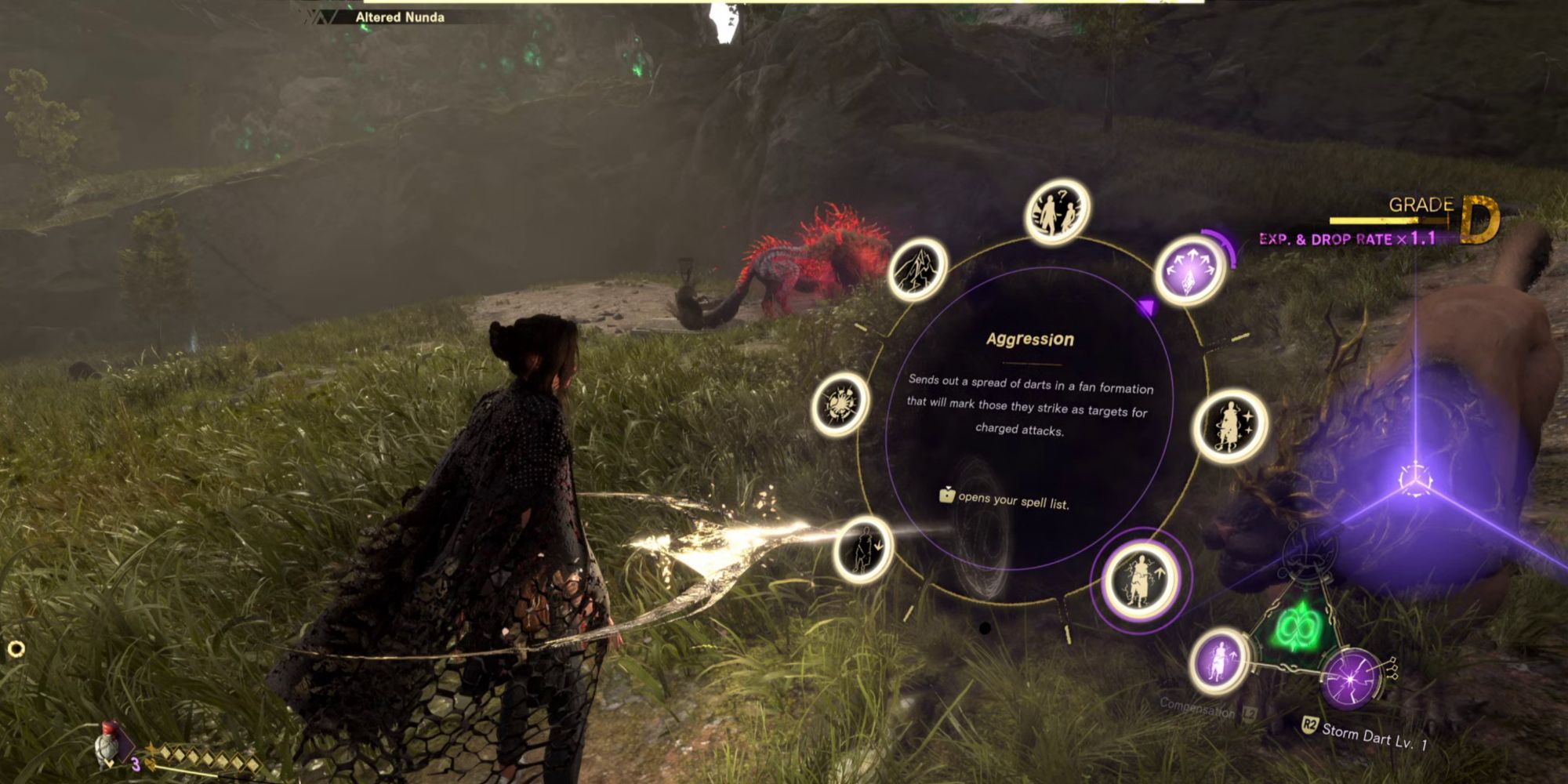 This Altered Nunda is the leader of a pack of Miacis. Both monster types are weak to Olas's Magic, but if you're taking them on at the first possible opportunity, your best option is Sila's Magic.

These enemies are very fast and very aggressive, and the best counter for that in a game like this is to match their aggression. Take out the Miacis first – the Nunda is an incredibly agile enemy, so you don't want any distractions when taking it on. Luckily, the Miacis should be very fragile at this point in the game.

Once the Miacis are dead, take on the Nunda. If you have Olas's Magic, Pulse Dart is the perfect tool – you can stay far enough away from the Mutant to avoid getting hit by its impressive leaping attacks but still be able to damage it a ton. If you're forced to use Sila's Magic, try staying as close as possible to the Nunda, using the close-range attack spells and Crucible to take it down.

If you get caught and Cuff breaks, though, just run circles around it and recover your stamina when the Nunda is busy trying to launch one of its lackluster ranged attacks. 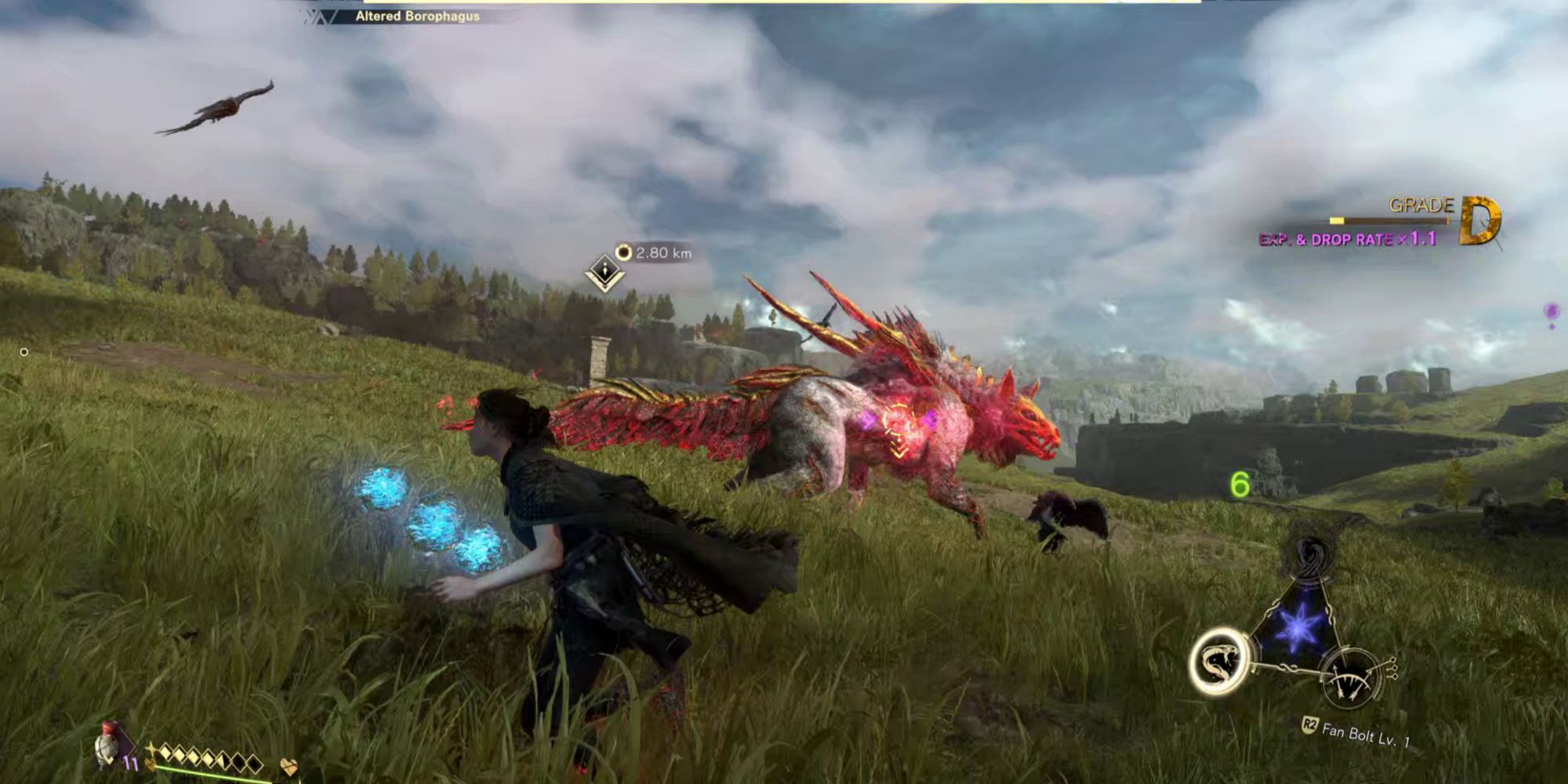 You'll be dealing with a very annoying flock of Vorona along with this Borophagus. These birds are weak to Frey's Magic and Prav's Magic, and you'll want to take them out first. Scatter Shot works well, as does Chain Bolt, but Disperse is probably the best way to deal with them. You can just set the turret plant up and let it go wild – it's likely to defeat the entire flock in one cast, letting you give the Borophagus your full attention.

Once the birds are dealt with, the Borophagus isn't too tough. It's also weak to Frey's Magic, and you should be very comfortable using it at this point in the game. The one attack you need to look out for is its spinning spine attack – the Piercing attack indicator is very fast with this attack and if you're too close when it starts, it's very likely to break Cuff and put you in a near-death state. 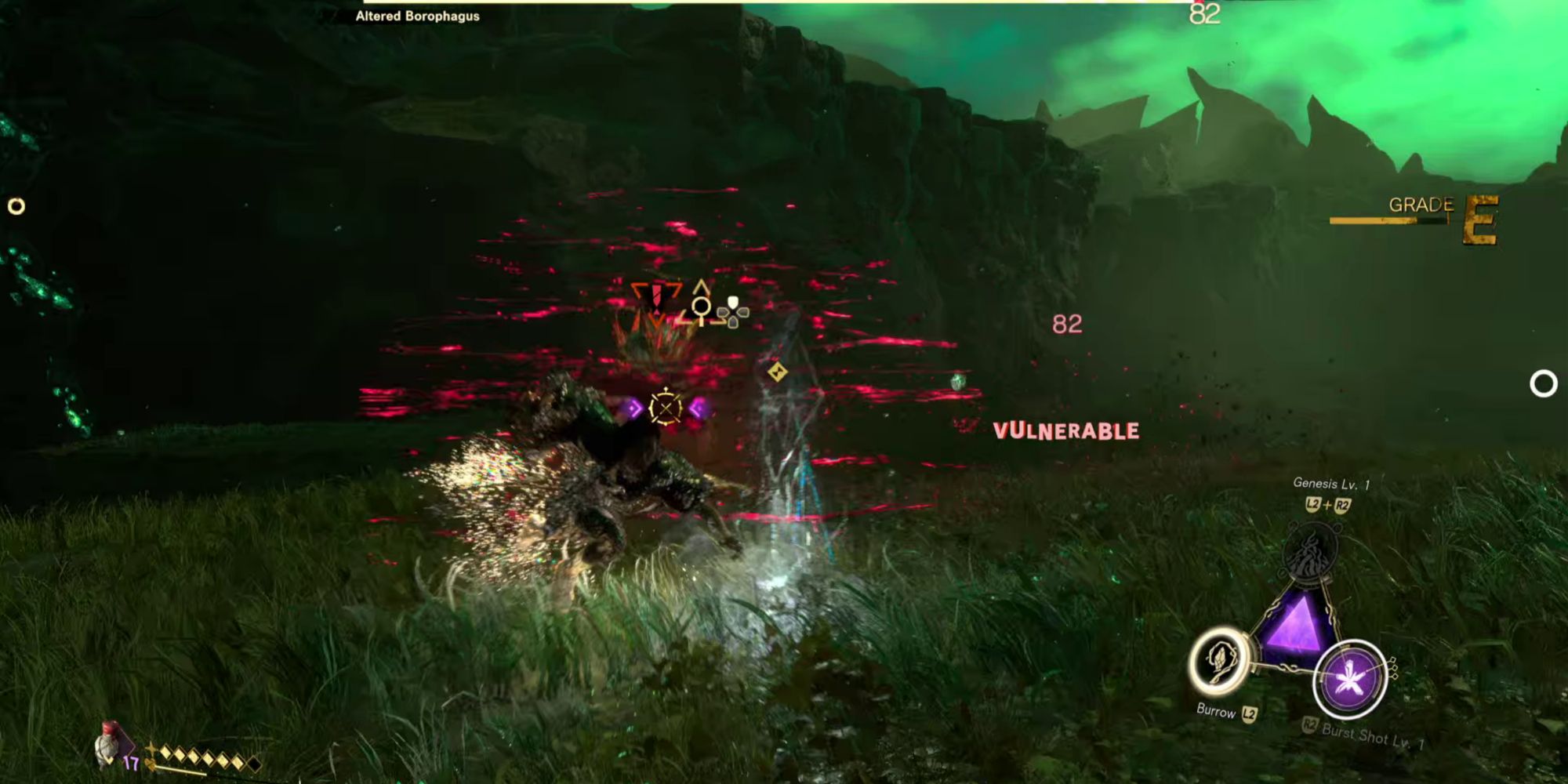 This Borophagus fights alone, so it's one of the easiest Mutants to fight in Visoria. While it's quite agile, the only thing you have to be on the lookout for is its spinning spine attack (see above).

It's weak to Frey's Magic, so take advantage of every tool you have – Disperse and Implant are easy to use, and thanks to how aggressive the Mutant is, it's easy to set up a successful Prime trap. Use Tendril if you get hit by one of its regular attack. All in all, you shouldn't have trouble with this fight. If you need a little extra power, make sure you're using a cloak and necklace that boost your Frey's Magic damage. 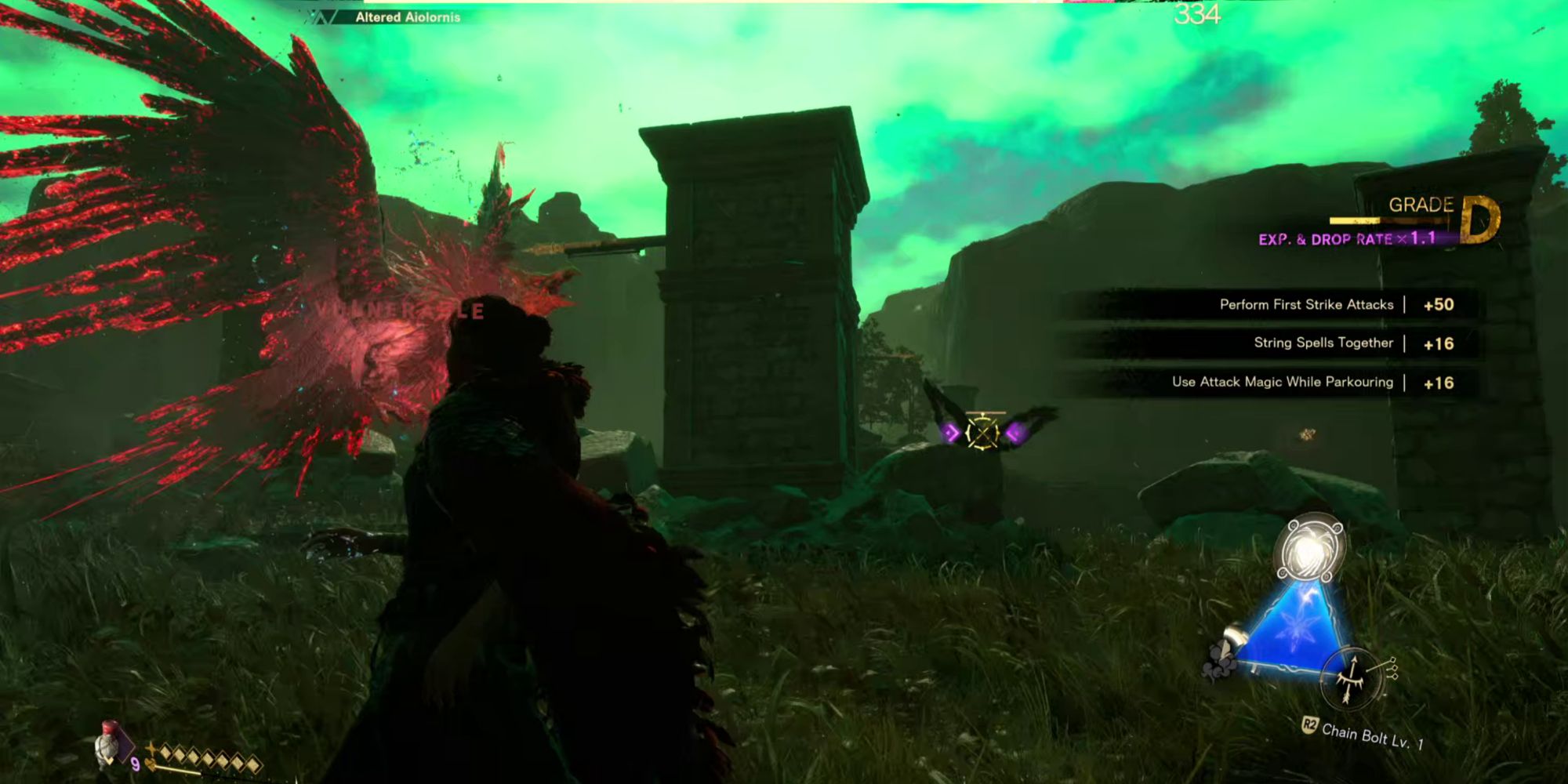 One of the most difficult challenges that Forspoken has to offer is a fight against an Altered Aiolornis backed up by multiple other bird enemies. In this fight, you're also dealing with Qiliania.

Prav's Magic is the answer to this fight, Chain Bolt specifically, thanks to its speed and range. Since the multiple birds will spend a lot of time making swooping attacks at you when you can't really predict where they're coming from, we recommend waiting until you dodge one, fire off a standard aerial attack, and then fire a quick, auto-charged Chain Bolt when you land. This should make short work of the Qiliania and will also work well against the Aiolornis.

If you can get multiple enemies wrapped up in a Surge Magic, that would make this fight a lot easier, but it's difficult. 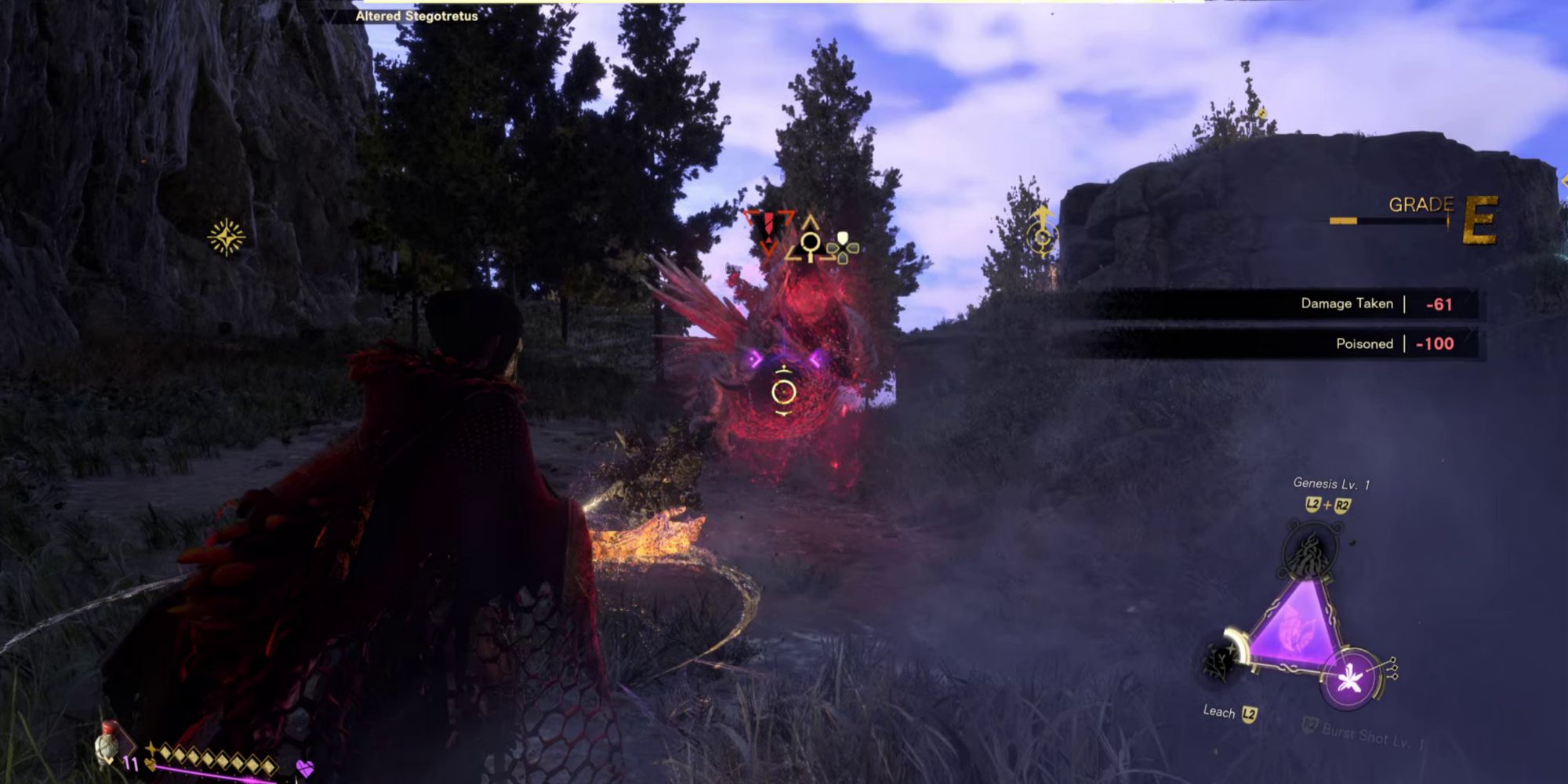 This Altered Stegotretus is surrounded by a flock of Qiliania and Sulcavis. These are very annoying to deal with when you're trying to focus on a boss, so it's important to take them down first. They're all weak to Prav's Magic, so break out your water spells for the job. If you're struggling to get any spells charged thanks to the constant barrage of incoming attacks, try using the dodge-and-counter trick outlined in the Aiolornis section above.

If you get poisoned at any point in this fight, use Leach to remove it immediately.

After dealing with the flock, switch to Frey's Magic to deal with the Stegotretus. This Mutant is rather slow, barring its forward leap, so it shouldn't be too hard to stay at a safe range and pelt away at it. 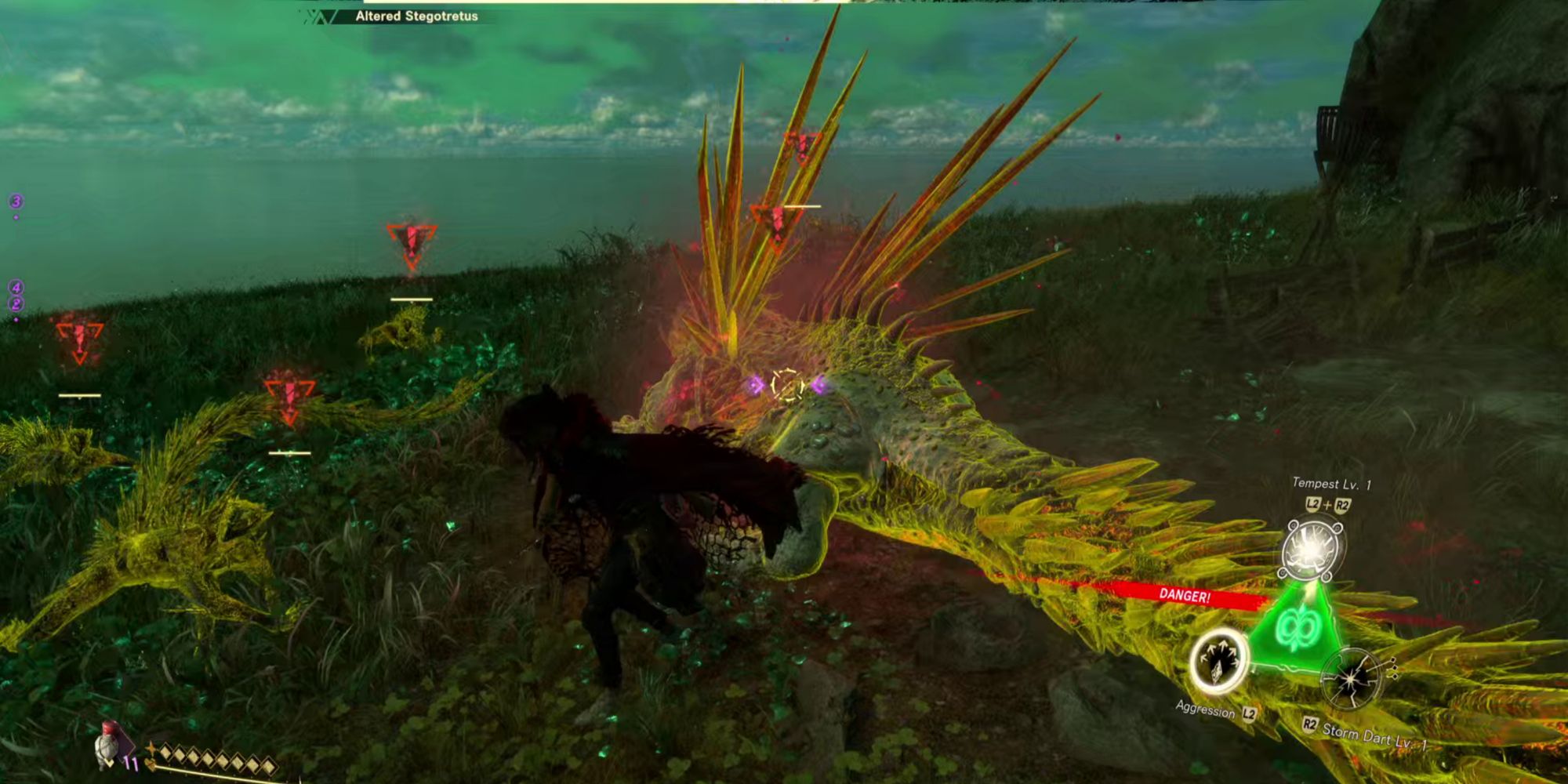 This tough fight's challenge comes from the swarm of Varanus that accompany the Stegotretus. There will be a ton of poison clouds littering the battlefield in this fight, so be careful and use Leach when you're sure you're not going to immediately get poisoned again.

Since the enemies all start this battle huddled together and are all weak to Frey's Magic, starting the battle with a fully charged Genesis (Frey's Surge Magic) is a fantastic idea. You want to get rid of the Varanus as soon as possible, as they are mobile, bulky, and have multiple ways to interrupt you.

Once you've dealt with the minions, the Stegotretus should go down easily. 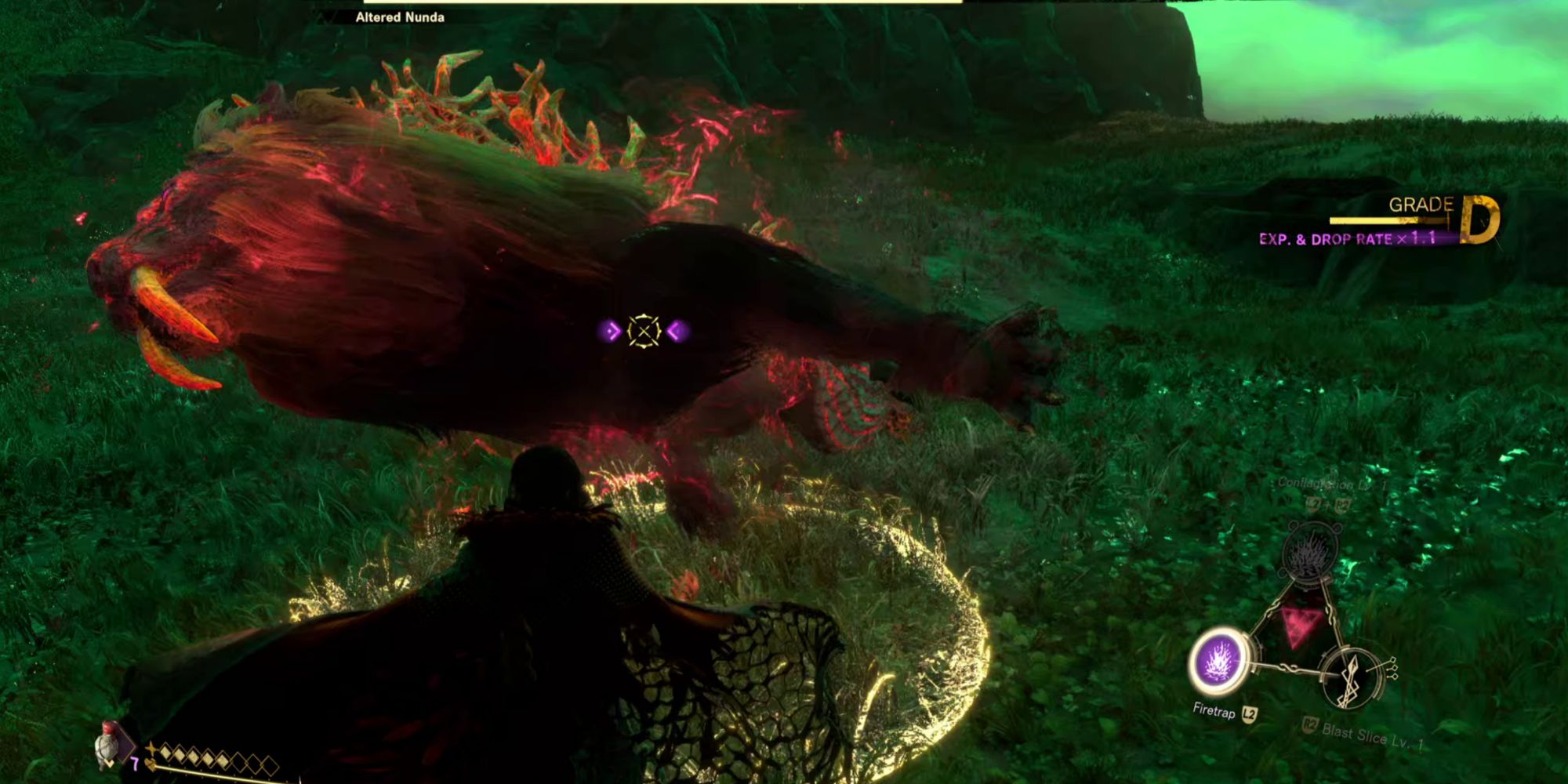 Along with the Altered Nunda, you're dealing with two Arctodus in this fight. Thankfully, they aren't Mylodon, but they're still bulky threats who will slow you down as the Nunda runs circles around you. Naturally, you'll need to take these out first – use Sila's Magic and consider trapping them inside a Crucible with you while you deal with them. This should keep the Nunda out, saving you from getting surprised by an unpredictable leaping attack.

Once you've dealt with the Arctodus, it's the Nunda's turn. Be wary of its mid-range leaps, especially after it's buffed itself with a roar, and try to get as much damage in during its downtime. The best times to strike are when it's busy using its easily-dodged ranged spine attack, and just after you've dodged one of its lunge attacks. It's weaker to Olas's Magic, but Silas's Magic is generally faster to deal real damage. 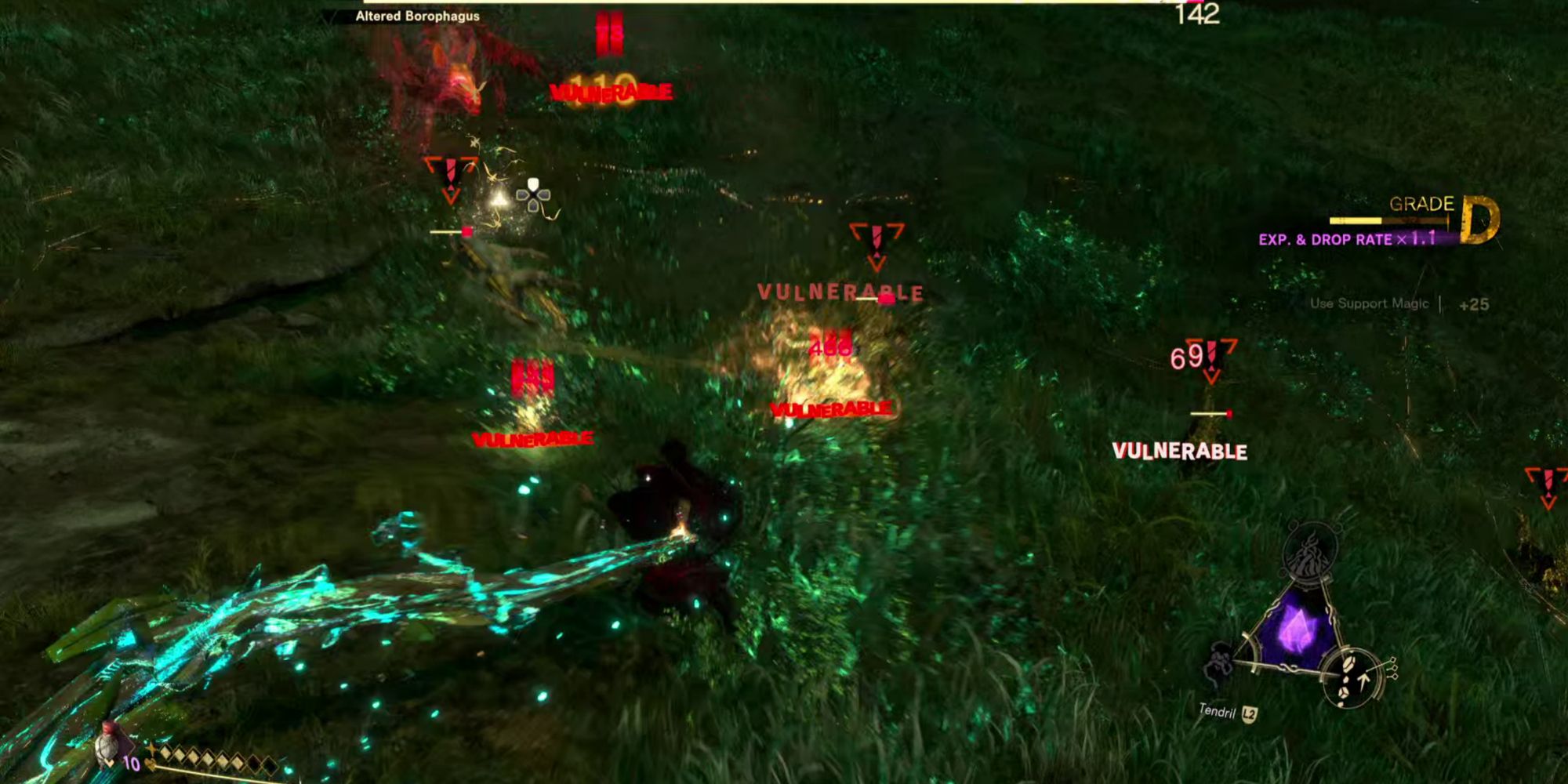 You'll be up against both the Altered Borophagus and a small pack of Amphicyon in this fight – all weak to Frey's Magic. Luckily, the Amphicyon are quite fragile and not very threatening anyway. Chuck a Disperse down or take them all out with a well-placed Tendril or Surge Magic attack – these strategies will also take chunks out of the Borophagus.

The Borophagus itself is not that threatening. It's very agile but likes to stay very close to you, making any of your three main attack spells quite effective. It likes to make direct biting attacks at you, so the Shield Shot might actually be one of the better options in this fight, though Burst Shot will work fantastically if you prefer that spell.

As it stays very close to you, it's easy to make a Prime trap work. Don't try this until the Amphicyon are all defeated, though, as they're as likely as the Borophagus to trigger it. 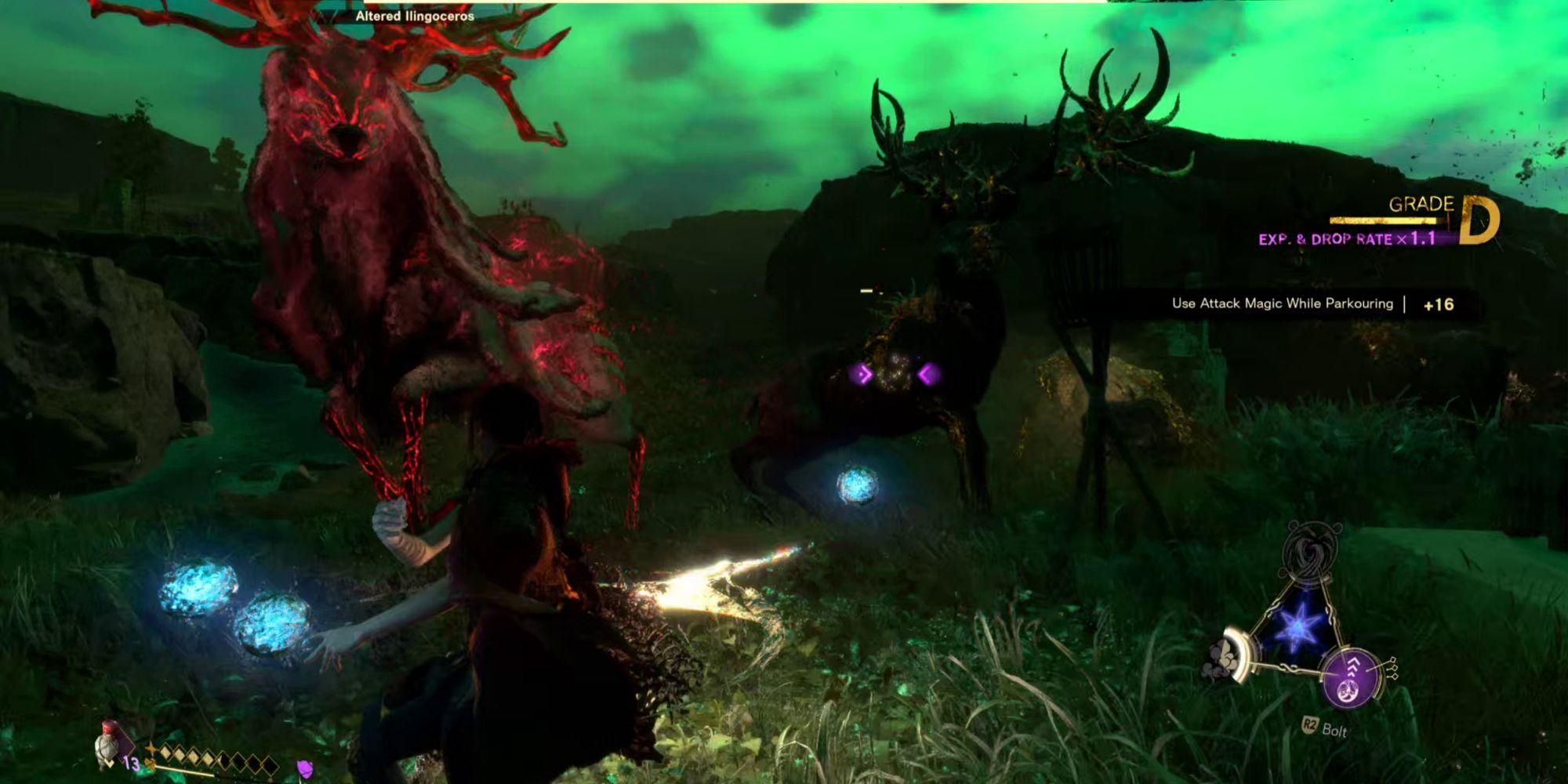 Along with the Altered Ilingoceros, you're dealing with some regular Ilingoceros and Ramoceros. This will make the start of the fight very hectic unless you can get rid of some of the lesser deer quickly. As they're all weak to Prav's Magic, a Surge Magic will work well, especially if you have it leveled up or enhanced.

The Altered Ilingoceros is like the regular variety on steroids. It loves to bound around the battlefield and will smash into the ground to attack you. If you get hit, you'll suffer a defense debuff, which is potentially fatal – recover quickly with Healing Draughts and Aegis to stay alive – this is especially important if Cuff is currently broken. 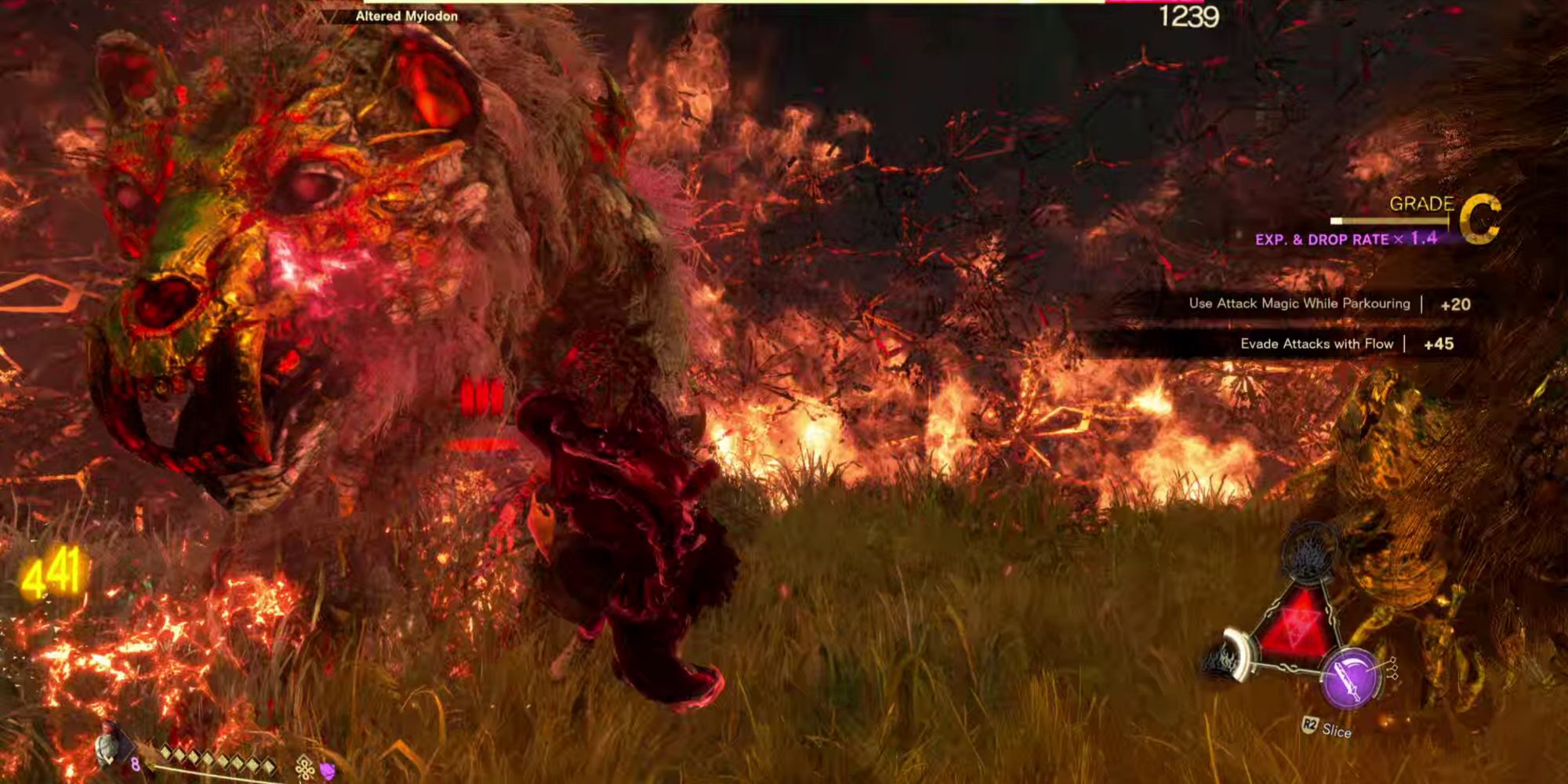 In addition to the Altered Mylodon, you're up against a regular Mylodon and some Arcotodus here. As a result, Sila's Magic will be very helpful, especially the Crucible Support Spell, which will allow you to section off parts of the battlefield and let you deal with fewer enemies at a time if used intelligently.

Thanks to the multiple Mylodon, it's very important to be on the lookout for their ranged attack, which summons rock spikes from the ground. This fight can get hectic, especially with how large the enemies are, so keep your eyes peeled.

This is a fight where offense matters more than defense – equip your best Red Magic-boosting cloak and necklace, and consider outfitting them with abilities that boost your Surge Magic charge rate – massive fire spells are your best bet for dealing with these bears' huge health pools quickly and efficiently. 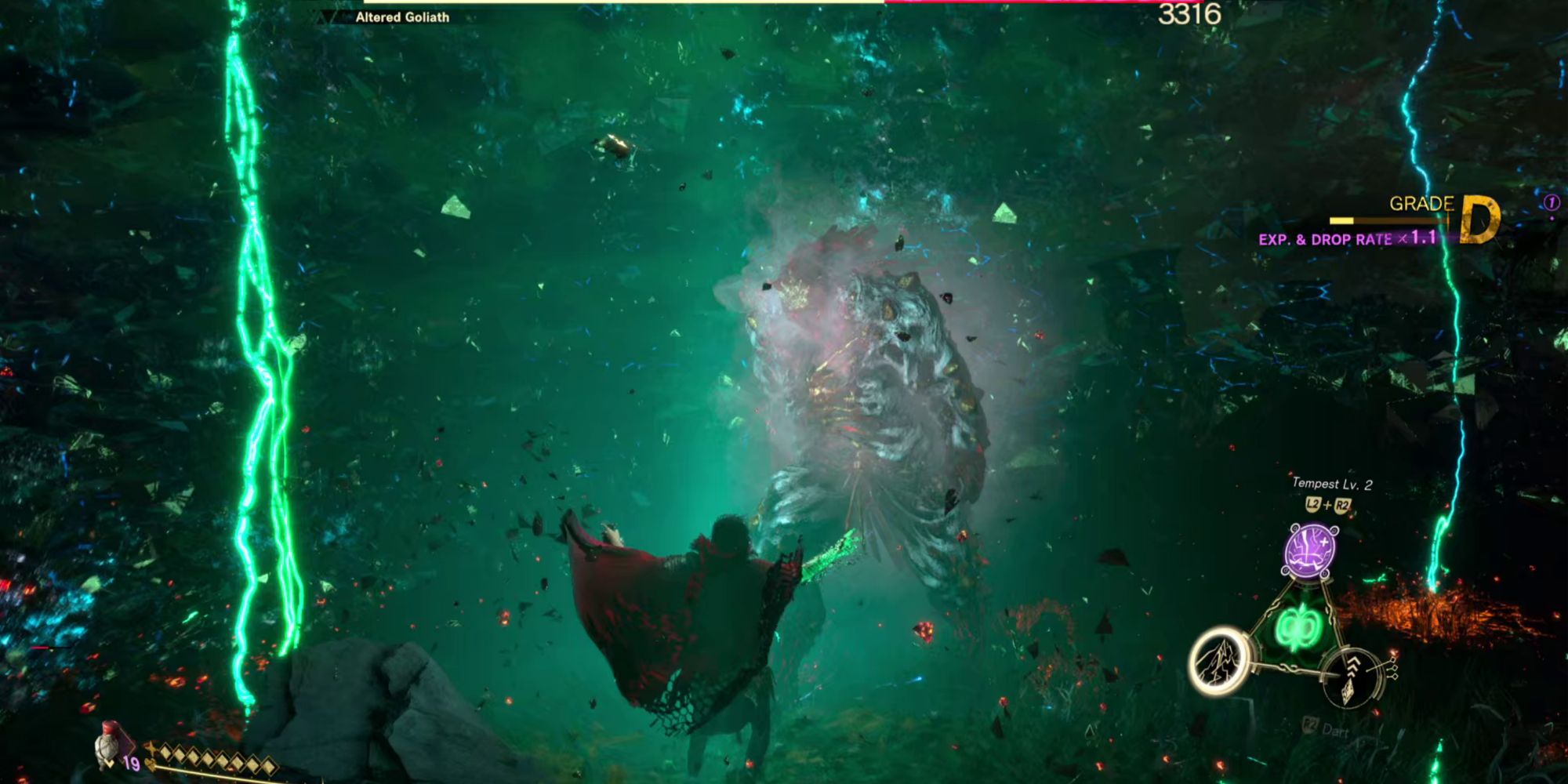 Along with the Altered Goliath, you have lots of Boggarts to deal with here. As they're weak to Frey's Magic, you can employ Disperse to make short work of them, and Burst Shots will also deal with them quickly. It's important to take care of the Boggarts quickly, as they like to keep their distance – making it unlikely for you to deal with them passively as you attack the Goliath – and they have annoying ranged attacks.

After the Boggarts are dead, focus on the Goliath. If you have Olas's Magic, you should be able to deal with it easily – Pulse Dart barrages will deal a ton of damage and the Goliath doesn't have the agility or mobility to stop you charging up, unless it uses a ranged attack, which is easy to spot. Prav's Magic can work in a pinch, just make sure you use Naedre and keep poison working at all times.