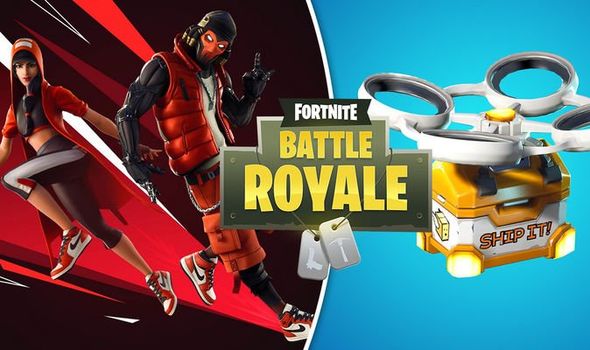 UPDATE: Fortnite developer Epic Games has shed some more light on the Fortnite X Jordan crossover in the 9.10 patch notes.

“Score big when you cop the Hang Time Bundle. Get the Grind Outfit, Clutch Outfit, and a challenge pack unique to the set.”

ORIGINAL: Fortnite developer Epic Games has taken the game offline for maintenance, which means update 9.10 is available to download now.

According to the patch notes, the headline new feature is the addition of brand new Hot Spots.

These are described as “randomly selected locations on the map that have a high loot rate with an increase of Supply Drops”.

The Hot Spots contain Loot Carriers, which can be shot down for higher quality weapons.

As previously reported, the update also makes big changes to the game’s audio.

• Sniper Rifles only. Downed players are eliminated instantly. May the best aim win!

• Battle Royale gameplay with a limited set of weapons made up entirely of items that are vaulted in the standard modes.

• Shadow Bombs have seen a lot of late-game use, and we wanted to encourage risk vs. reward when picking the item up. By leaving maximum stack size the same & reducing availability, the item’s potential remains the same but swapping a spot for it early on is riskier.

• Available in Uncommon and Rare variants

• Since the Thermal Rifle and Scoped Revolver have both recently been vaulted, this week we wanted to bring back an oldie but goodie to round out the medium/long-range item line-up.

• When compared to other items of similar rarity, the Combat Shotgun was dropping a bit too frequently. This change will put it closer in line with other items.

• Dropping part of a consumable item stack no longer interrupts using the consumable.

• Shadow Bombs correctly leave the players inventory when no charges are left.

• Shadow Bombs are consumed properly when quickly picking up a replacement item during activation.

• Ability to move is no longer lost if Rift-to-go was used with Balloons.

• The Bush now correctly attaches to players in specific animations, such as skydiving.

• Air vent audio is now correctly removed upon on destruction.

• Camera issues when exiting a Mounted Turret have been resolved.

• Remote Explosives will now open and close with doors they are stuck to.

• Every match, select named locations will be marked in gold text on the map.

• These Hot Spots represent the presence of Loot Carriers. Shoot down the carriers for additional high-quality weapons.

• Minimum of one Hot Spot

• Loot Carriers drop a weapon of Rare or higher quality along with two stacks of ammo.

• Hot Spots will have between 12 and 16 Loot Carriers depending on the size of the location.

• Equipping the blueprint to start building has improved in high latency situations.

• Players can no longer fire/reload weapons while reviving a DBNO teammate.

• Contrails are no longer stuck on the player if they dropped from the bus directly into a Slipstream.

• Fixed a regression in level streaming performance introduced in v9.0. This should significantly improve loading times for buildings, and reduce instances of players landing on low-LOD meshes.

• Reduced the time that it takes the enemy in-air audio loop to kick on, for better awareness of an enemy dropping in on you from above.

• Boosted the volume of nearby footsteps and landing sounds of enemies not in line of sight.

• Tighter spatialization of close-range pickaxe sounds from other players.

• Added clearer sound when an enemy confirms an edit on a building piece within ~2 tiles of your position.

• Removed glider audio tell for players traveling through a Slipstream.

• Your emote music is now prioritized over other players emotes in the front-end.

• Emote music is now full stereo when in the front-end.

• Added a new Headshot + Shield Break sound, for when the two events occur at the same time.

• Lowered the minimum velocity required to trigger a landing sound

• Walking up on the edge of a building piece plays correct material specific footstep audio.

• Enemy pickaxe sound now plays correctly from impact point and not from player using the pickaxe.

• The Boom Bow’s fire sound has been fixed to not cut off when switching weapons immediately after shooting.

• Adjusted the “damage” color when taking shield damage back to an increased-contrast version of the original.

• The intent is increased readability of current shield value immediately after taking damage, but red was causing players to believe they were taking more damage than they were.

• Party Leaders who left their party’s current match could start a new match and take the entire party with them.