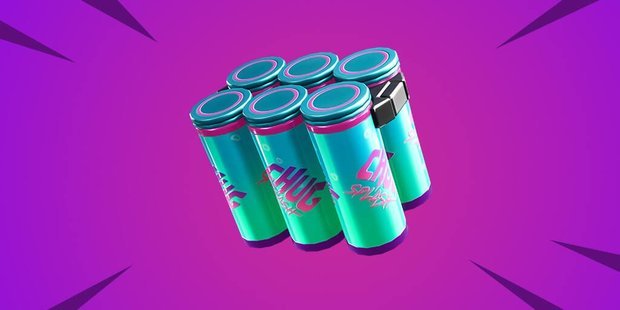 When Fortnite announced the downtime they did provide a clue as to one of the big changes, but without a change to the in-game MOTD (Message of the Day) it was a little hard to gauge exactly what this new item was.

Normally the feed provides a bit of a clue prior but this wasn’t the case for update 9.30. Thankfully when the item shop changed over so did the message, which now includes mention of a ‘Chug Splash’.

The description of the new item reads, “It pays to share. Keep your squad in the game!”.

This item hasn’t been leaked by dataminers, so there’s no info what-so-ever on how it will work.

Although the description does seem to suggest it’s something for your squad, so perhaps this is the first item of it’s kind that’s made to be shared with your teammates.

Not much use for single player, but still it’s an interesting new take on the health items that could mix up the meta somewhat.

Stay tuned because when the official patch notes arrive we’ll have more info.

We’ll be upfront and say this isn’t a given. But the fact that the ‘bigger’ updates tend to include plenty of leaks about new skins, coupled with recent E3 event would suggest some excellent new skins on the way.

Those who kept one eye on Twitter will know that the flurry of Fortnite events in the last week included plenty of clues as to new skins and styles for some of our favourite Fortnite skins.

Some are even shown in the video below from DrLupo.

Point being, we wouldn’t be surprised to see plenty of new skins in the update and some could have been hiding in plain sight at the Fortnite events too.

One of the wildly popular new modes introduced to players at E3 was prop hunt.

The mode isn’t anything new, it’s existed in first person shooters for some time. But in Fortnite with it’s silly props and colourful gameplay it’s taken to a whole new level and looks amazing.

However, Epic Games has now seemingly allowed him to upload 20 minutes of gameplay to his YouTube channel. So it’s possible they’re going to make this available to the wider public.

Or at least, we hope so anyway.

It’s not exciting but you can also expect the usual slew of patch notes detailing fixes to the game.

Early patch notes from the Epic Games Trello page already give us some insight into those problems looking to be fixed pronto.

For instance, the Trello lists that the issue of Traps not appearing for all players will be fixed in the next release.

Currently “Traps sometimes rise into structures’ ceilings and therefore cannot be seen by players” So obviously, Epic has fixed that.

But there’s also an issue where player models swap with other players when squad formations change. It’s not ideal, so again, Epic’s found a fix.

“We’re currently investigating an issue with Style Challenges from previous and current Battle Passes, even though they are completed”.

Stay tuned for full patch notes and more details when the update is released at 9am BST on June 18.