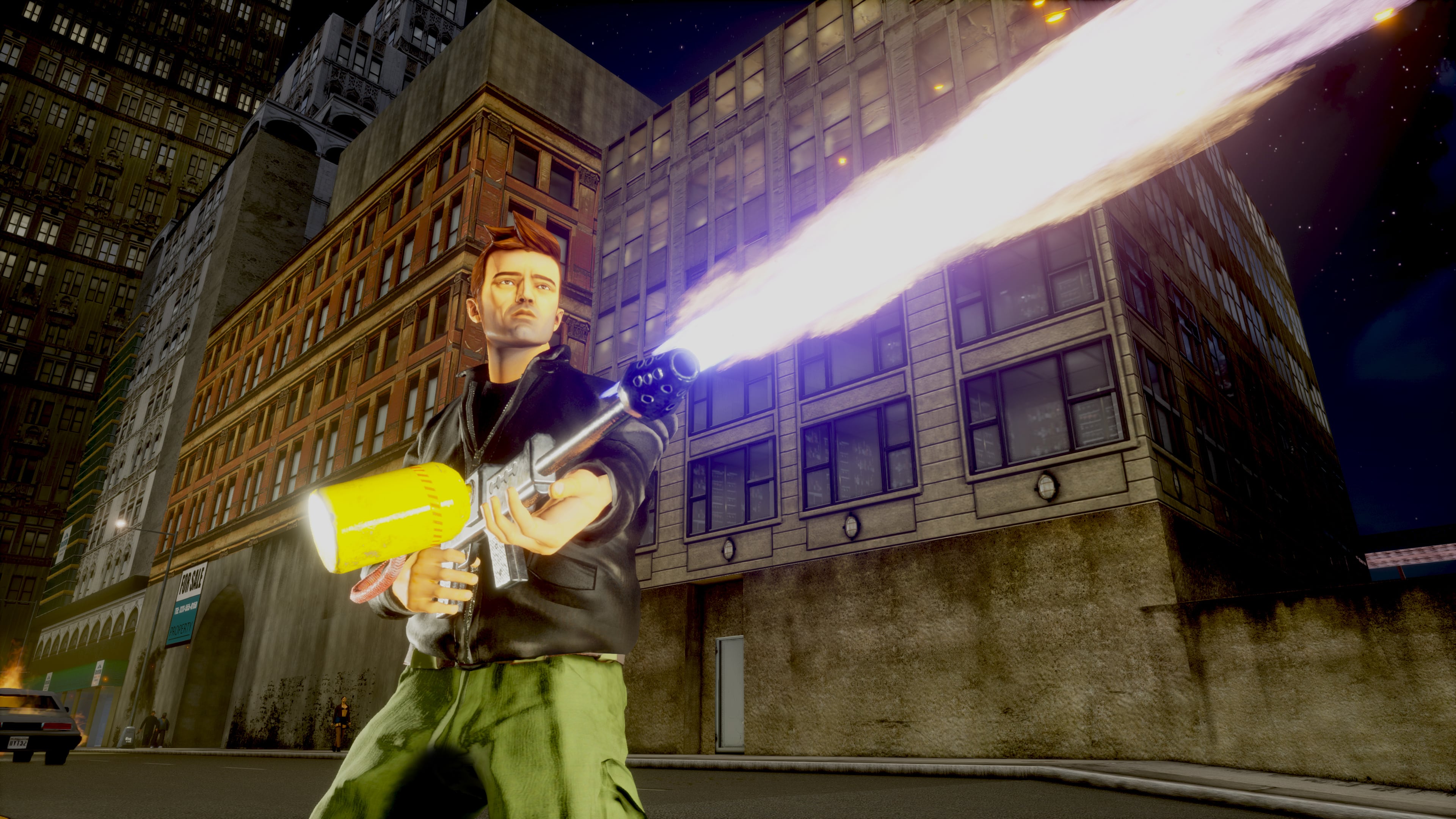 The Monday Inbox wishes Nintendo wasn’t so random in its treatment of its retro games, as one reader looks forward to The Gunk.

Not a disaster
It has been interesting to read people’s thoughts on the GTA: The Trilogy – Definitive Edition and whilst I don’t doubt what they have experienced, I don’t feel the trilogy is quite the disaster it has been painted as.

Don’t get me wrong, I think Rockstar have put in the minimum effort they thought they could get away with and with their resources there is no excuse for the graphical errors and other glitches.

I have played about five hours of GTA 3 so far and I have noticed bugs and glitches, but most are aesthetic or happening around you and don’t impact the gameplay. For me it plays as intended for the most part and that is the problem. I am enjoying it but its a 20-year-old game and whilst the few quality of life improvements Rockstar have added do help, it is very much showing its age.

Rockstar should have made full remakes but if you take them as the remasters, they are then they are perfectly playable but rough around the edges, partly due to their age and partly due to Rockstars laziness.
Pigfish2 (PSN ID)

#1 so why try harder
I’m surprised that anyone is surprised by the poor controls for the old GTA games. It hasn’t changed at all and is one of the reasons I wasn’t super keen on GTA 5 and even Red Dead Redemption 2. Surely it can’t be that hard to improve?

The makers of Alan Wake managed it in Control. It was way better than their last effort, the time travelling one that I can never remember the name of, so it can be done. I suppose if you’re making a ton of cash every week then why do anything?
Bobwallett

GC: Quantum Break is the name of the time travel game.

Non-definitive
So it appears the lack of previews of GTA: The Trilogy – Definitive Edition were likely due to the terrible performance issues. Some of the images GC linked in their news article last week were hilarious, but it’s ridiculous that another game has been released in such an awful state.

At first, I was reading in relation to the Switch version, but it appears even the PlayStation 5 and Xbox Series X are seeing massive frame drops. This is in addition to some of the awful design changes that are effective across all versions. I suppose a patch could improve the frame rate, but we’re unlikely to see improvements to the character designs or those store signs. Apparently, when it rains in GTA 3 it rains everywhere, even inside the tunnels. How did this ever pass QA?

The ironic thing is that a true definitive version of these games would be the PC originals with mods, but due to the takedowns we can’t even do that anymore.

They should have just ported Chinatown Wars to the Switch, that’s majorly underrated.

Pre-order only
For anyone who’s interested: Narita Boy is getting a limited physical release on Switch and PlayStation 4 on Limited Run games. It’s limited because it is available for pre-order for one month, it isn’t limited on how many copies they are selling. Here’s the PlayStation 4 version and here’s the Switch version available to pre-order now. They also have a collector’s box set for both platforms too.
Andrew J.
PS: Looking forward to seeing the new GamesMaster programme.

Baba Is More
Just thought I’d let everyone know there will be a huge free update to Baba Is You that includes 150 new levels and a level creator! So basically a whole new game for free.

It is the most genius game I’ve ever played – but also the hardest. When you find the solution to a level though, it really does make you feel like the smartest person in the world.
Mr Foreign Warren
PS: Dicey dungeons has recently received a small Halloween update and is an incredible roguelike game, similar in many ways to Slay The Spire. Check it out.

GC: Those are two great games.

50/50 chance
I see The Gunk has been given a release date of the 16th of December. It’s an intriguing looking adventure by the developers of the SteamWorld games releasing on PC, Xbox, and Game Pass day one.

Game Pass has been a little hit and miss with these day one indie games this year. Sable, The Ascent, The Good Life, and Twelve Minutes were probably my most highly anticipated indie Game Pass games and all were disappointing to varying degrees.

I played the first two to the end and enjoyed them, but they were no Death’s Door that’s for sure. But recent day one indie releases on the services like Flynn: Son Of Crimson, The Artful Escape, Echo Generation, Unsighted, Moonglow Bay, and Unpacking have been really good. Coupled with some excellent older but still quite recent indie games like The Forgotten City it’s been good.

The Gunk looks to be exactly my cup of tea though and got my fingers crossed it’s something special.
Simundo

Battlefeels good, man
Wow, stayed up till 3am with my usual squadmates playing Portal and a couple of the new maps on Battlefield 2042.

Absolutely loved it, few glitches here and there and a couple of user interface complaints but on the whole was a fantastic experience. It’s like the technology has finally caught up with Battlefield, the experience is fast, smooth, and the gunplay feels great. Can’t wait to explore it all in more depth!

The Bad Company 2 content got me right in the feels, the Battlefeels.
Tincanmemory (PSN ID)

Any price
I’m delighted with my Zelda Game & Watch. The GC review was right when it said it’s clearly been put together with a lot of love.

I’m hardly saying anything new here, but Nintendo’s weird treatment of their old software library is so frustrating.

Mario, Zelda, Fire Emblem, Metroid and more are crying out for compilations/better compilations. I’d love to see whoever oversaw the Game & Watch get a crack at putting together a Zelda collection for the Switch.

I guess they don’t necessarily want to give away more than say two to four games in one package for normal RRP, but they could always divide them up by age, 2D vs. 3D or handheld vs. home console and then do premium editions where you get them all.

Just using Zelda as an example, and going into fantasy territory, I would pay whatever Nintendo asked me for say Link’s Awakening DX, Oracle Of Ages and Seasons, and Minish Cap in some nice packaging with a few Easter eggs thrown in. If they did a compilation of the two N64 games and added an extra dungeon like they did for Link’s Awakening DX, the internet would go into complete meltdown. Nintendo.com would probably go down under the weight of the traffic from people going to pre-order it.

I know there are challenges in putting this sort of thing together, but it’s hardly impossible and such an obvious potential cash cow.
Charlie

I bought a pair of Razer Hammerhead earbuds on Amazon’s Black Friday deals. £45, normally £80 -bargain! They gave me this code for three months of Game Pass PC for £15, if any of the readers can use it.
Big Angry Dad82 (gamertag)

GC: We’ll pass it along to anyone that wants it.

This week’s Hot Topic
The subject for this weekend’s Inbox was suggested by reader Helix, who asks what’s the most disappointed you’ve been by a video game at launch?

It’s easy to get yourself hyped up for a big new release but which one ended up with you being the most disgruntled and why? Was the game not what you expected, and do you feel it was misrepresented by its marketing or reviews?

If there were technical problems at launch how severe were they and how quickly were they fixed? How tolerant are you of launch day issues and how have you adapted to the idea that many games don’t work properly when they first come out?