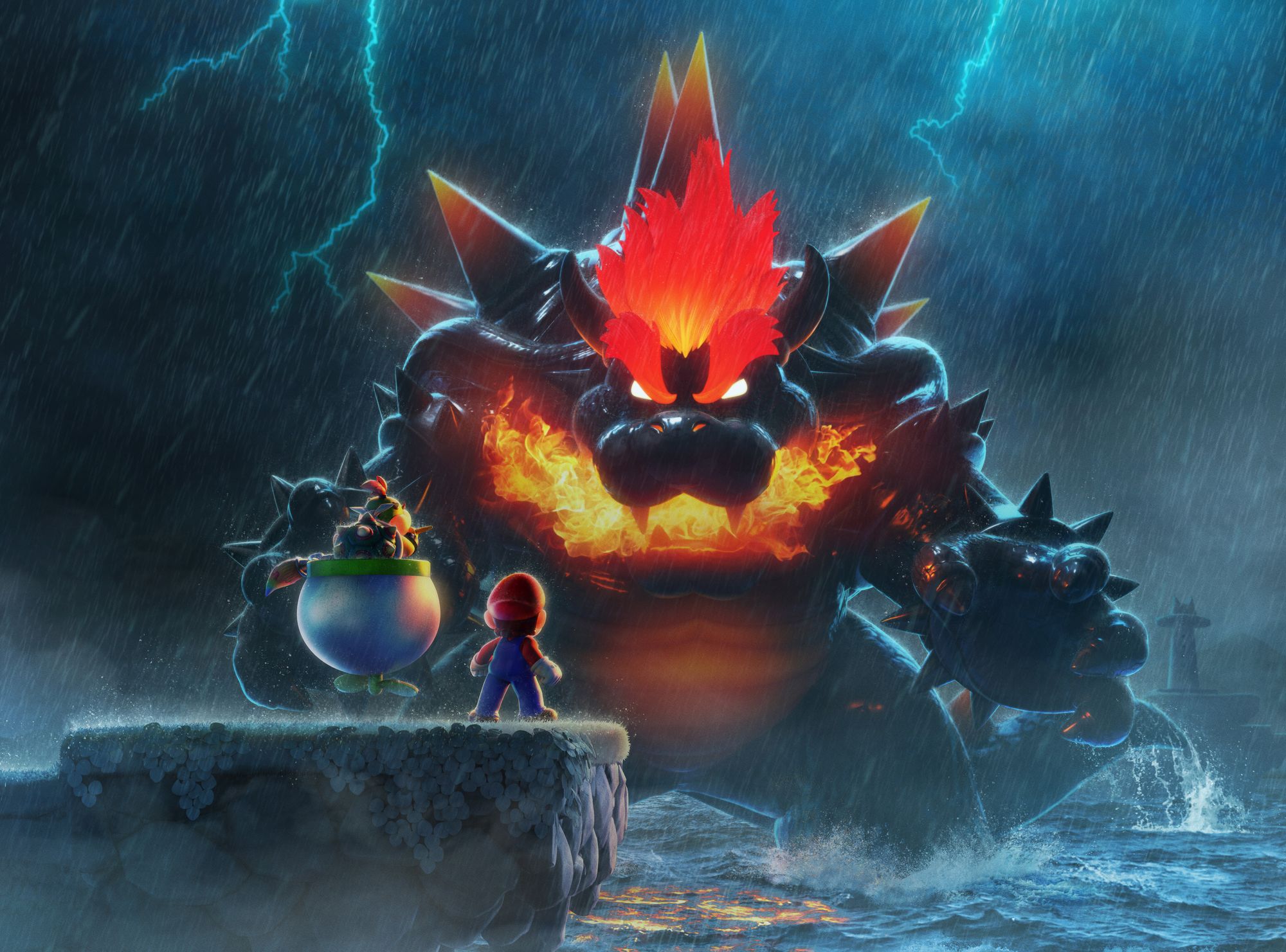 The Friday Inbox is getting very frustrated at how difficult it is to buy a PS5, as one reader is upset at Xbox Series X Wi-Fi problems.

Cheap risks
Really looking forward to Super Mario 3D World + Bowser’s Fury being released this week, despite already owing the original game on Wii U. At first I was undecided as to whether to double-dip, although I found the option for online multiplayer tempting from the off. The addition of Bowser’s Fury sealed the deal though, when it became obvious it’s something very different.

I’ll see if I was right over the weekend, I guess, but I have to congratulate Nintendo for making the effort of adding extra value, as it’s not something they had to do – as we’ve seen from other Wii U ports.

I will agree with others though that it would be nice to have Bowser’s Fury available separately, for those that don’t want to pay out for the whole package. I’d actually go further and suggest Nintendo make more of these shorter, six hour length games and use them to be more experimental – especially if it’s new teams working on it and learning their trade.

It’s similar to what GC suggested with Spider-Man: Miles Morales, a lot of games are better when they’re shorter and more focused but that doesn’t work with the one size fits all £50 (or more) price tag. I like a 200+ hour epic as much as the next person but I’d rather that be the exception rather than the rule. And I’d also rather games be able to afford to take a risk rather than being forced to be as conventional as possible just because the budget doesn’t allow for any risk.
Gordo

Too much Zelda
I’d count myself as a Zelda lifer, having been playing it since the SNES days and believing Ocarina Of Time to be the greatest game ever. Didn’t love Breath Of The Wild, like most others did, but each to their own. I’m writing because I can’t believe anyone really wants The Wind Waker remastered again(!).

The fact that it’s my least favourite Zelda doesn’t even come in to it. It’s just that its art style is so timeless it doesn’t need to be constantly upscaled because the benefits are so small. Nothing’s going to fix the endless time you have to spend in that stupid boat.

As a Skyward Sword defender I’d much rather they focused on a remaster of that. Difficult I know, because of the control schemes, but surely much more in demand. I think it’s long overdue a reappraisal and this would be a great opportunity.

But hey, it’s Nintendo so I won’t hold my breath.
Chris

GC: We don’t think it’s a case of anyone wanting it, so much as the existing Wii U remasters being the only things Nintendo have that can be released at the moment. Assuming the rumour is true, that is. We’d also be interested in a Skyward Sword remaster but only if they were bold enough to edit it down and remove the bloat and repetition, but that’s not something that ever seems to happen with remasters.

Pack it up Sony
I left PSN as Xbox was in stock and scalpers and Sony are over in the UK. Most UK gamers are choosing Microsoft for gaming and ditching Sony for good as Sony may as well stop making UK PlayStation 5 plugs, as they lost most of the UK customers due to their own pathetic ways and allowing scalpers to win. Not bother me. Forza Motorsport is much better than Gran Turismo.

It’s good to know, read, and see Microsoft are now finally been noticed as the best gaming console of all time and Game Pass Ultimate’s game selection is unmatched and well ahead of its rivals.

I even found the remake of the first ever Resident Evil game for free with Xbox Game Pass Ultimate. That is brilliant.

Question: will the Metro add articles to ask how many people want Destruction Derby to return to current and next gen?
Anon

GC: ‘Most UK gamers are choosing Microsoft for gaming and ditching Sony for good’ – where did you come by this surprising information? Also, Destruction Derby is a Sony owned franchise.

Old problems
Regarding controller drift. It’s long been a problem. I worked on supporting early laptops in the mid-90s and it was a very common problem with their keyboard pointing devices, they would nearly always start to drift as machines warmed up. The fix was not just improved hardware but also software which auto-corrected for it in real-time and kept things centred.

I suspect you are correct that the reason the problem has reappeared is that with these controllers doing so many functions it is harder for the software to detect what a human is doing and what is just the device not re-centring correctly.
Tinkers77
Currently playing: Assassin’s Creed Valhalla on PS5 – with no drift

One of three
We Were Here is currently free on the PlayStation 4 and 5 store until February 23rd. It is a very good co-op only game that can be played online. I expect they are giving it away free as there are two sequels called We Were Here Too and We Were Here Together that they will probably charge for when people have played the first game for free.
Andrew J.

Known issue
I thought you would like to know of a Wi-Fi issue regarding the Xbox Series X/S, as featuring this in a news article or giving it some other coverage in the media may help to resolve it or bring more attention to what is a console-breaking bug.

The Xbox Series X/S has had a Wi-Fi issue since launch, causing random disconnects and then reconnecting 30 seconds or so later. This is a massive problem and there are currently hundreds of posts on the official Microsoft forum.

At first, Microsoft and Xbox representatives were communicating on the forum, and it was added to the ‘known issues’ list. But now it’s been removed from that list and they’ve all gone radio silent, while this issue still remains three months on from launch. Some users have reached out to Phil Spencer on Twitter, but nothing is happening and not everyone can wire their consoles with an ethernet cable.

I feel like a Wi-Fi problem shouldn’t be an issue in 2021 and I would like to bring this to the attention of the media and the gaming world as this is a massive problem that I think deserves investigation. I’ve been an Xbox gamer since 2001 and to say this is a disappointment is a huge understatement, and the customer service is very poor.

Card holders
Another failed attempt at trying to get a PlayStation 5, this time with GAME. After reading the scalpers later on securing bulk stock again, it got me thinking what GAME could have done better. How about, for one of their next drops, only allowing GAME Reward Card holders to place orders?

This could be easily tracked by logging into your account, which would have your reward card number. This would be a great way of GAME rewarding their loyal customers. Especially someone like me who has been with them since they were Electronics Boutique!
Tony–1975 (PSN ID)

A bad day
Another frustrating and fruitless attempt at getting a PlayStation 5 with yesterday’s GAME stock drop.

I start work at 5am. Had my phone next to me all morning refreshing GAME’s website every two minutes.

10am the site all of a sudden is crashing or just hanging. Managed to get a PlayStation 5 to checkout but the site hung when confirming payment details. Left it 10 minutes then refreshed but got an error message. Had to get into a queue when trying to checkout again. In that for 35 minutes, then told they had sold out.

It’s such equine manure. It’s not getting one that frustrates the most. That I accept, it’s a popular item. It’s the equine manure you have to wade through just not to get one. Work was rubbish to boot. Three people called in sick and the machinery was being a git. I was quite vocally effing and jeffing. I shouted at the top of voice, ‘Why Sony, why?’ a stiff breeze appeared all of a sudden and some tumble weed smacked me in the face. I had their answer.
Simundo

Inbox also-rans
Any opinions (including yourselves GC) on what the worst ever arcade conversion is? Surely the Saturn version of Daytona USA takes some beating!
adams6legend

GC: That is certainly a stinker. OutRun on the Amiga was awful too. Sega driving games never did have much luck at home.

If Zelda: Twilight Princess comes out on the Switch that’ll mean it’s had standalone releases on the last FOUR Nintendo home consoles. That’s Resident Evil 4 or Skyrim levels and really shows how inconsistent Nintendo can be with re-releases.
ANON

This week’s Hot Topic
The subject for this weekend’s Inbox was suggested by reader Grackle, who asks what is your favourite retro video game franchise?

There are a lot of major series celebrating their 25th, 30th or even 40th (in the case of Mario/Donkey Kong) this year so which one is your favourite and why? You can suggest any game as long as it’s at least 25 years old this year and there’s been a new game in the last 10 years (i.e. it’s not a dead franchise).

Why do you think the series has lasted so long and what is your favourite entry? Do you think the franchise has an overall good reputation and has it got better or worse with age? What do you hope will happen to the series in the future and what would you like the first next gen entry to be like?

The small print
New Inbox updates appear every weekday morning, with special Hot Topic Inboxes at the weekend. Readers’ letters are used on merit and may be edited for length.