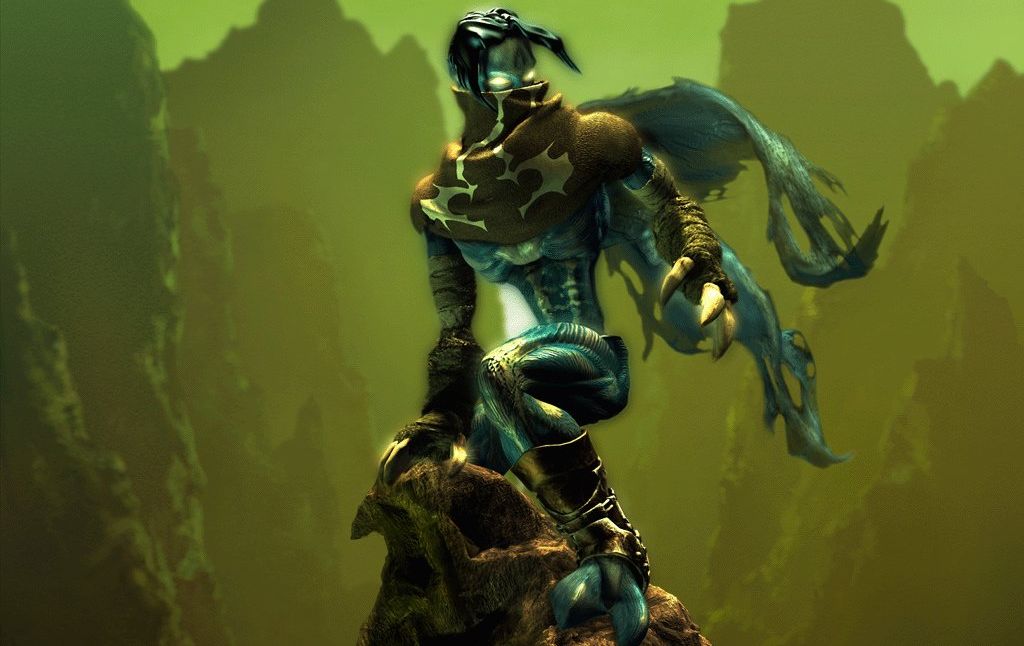 A new hope
I almost got excited when I saw Legacy Of Kain being talked about by Crystal Dynamics, then GC laid out what they’re working on right now and it quickly became obvious that there’s little chance of them ever making a new game. Maybe in five years or more, but by that point less and less people will remember or care about it.

Perhaps the obvious answer then might be a remake? You wouldn’t necessarily need Crystal Dynamics for that, and it would be a good test of whether people are still interested. I’d recommend remaking Soul Reaver, as I feel that’s everyone’s favourite, but I guess they could try and turn the first one, which was top-down, into a modern 3D game. Although that sounds like a lot of work to me.

I do think there is hope, as I don’t feel Crystal Dynamics would’ve highlighted the series above everything except Tomb Raider if there wasn’t some thought of doing a new one. How and when is a different matter entirely though and if anything does happen I don’t imagine it will be anytime soon.
Copal

Crossing the timelines
So Tomb Raider is officially under new management, eh? I don’t suppose it’s going to make much of a difference for a while but since Square Enix clearly didn’t want anything to do with it anymore it’s good to have it in the hands of someone that does.

I already liked the idea of the new game trying to combine the timelines of the classic and reboot timelines, as I feel the sweet spot for Tomb Raider is somewhere in between. Hopefully we can go back to Lara being a wisecracking badass too, instead of the sort of whiny Rambo figure she became in the reboots.

I did enjoy the reboot trilogy overall but I don’t think it really solved the problem of what a modern Tomb Raider game should be and I’m hopeful the next one realises that it should primarily be about exploration and puzzle-solving, not shooting.
Kimble

Public airing
Interesting to see Sony so obviously angry about not only the deal for Call Of Duty but the fact that they thought they were having a private conversation with Microsoft, which then got blurted out to everyone. It’s also hilarious that Microsoft obviously very carefully used the word ‘several’ and then made sure it was the absolute minimum number of years that would still fit that description.

That UK monopoly report seemed pretty wise to what they’re up to so I’m hopeful they’ll block the deal. If I had my way they would’ve blocked Bethesda and Sony buying Bungie too. Having everyone that makes games owned by only a handful of companies is clearly a bad idea and everyone should be against, even if there’s not really anything we can do to stop it.
Watson

Inevitable announcement
My hope with the question of Elden Ring DLC is that it was always planned to be something big and then when the game became a mega hit they decided to go all out. I also think that the fact that the game is still selling is the reason they haven’t already announced it.

Announce the DLC too early and I think a number of people would decide not to bother getting the base game and wait for the Game of the Year version. I know I’ve done that before with other games.

It’s obvious there will be DLC, it’s just leaving money on the table otherwise, but I think they’ll announce it relatively late in the day, maybe just a few months before it’s released. I’d guess at some point next year.
Marrow

Just an excuse
I’m slightly confused how Nintendo are happy to release a game like Splatoon 3 but insist they will not develop another F-Zero until they have a new, innovative mechanic, aka gimmick. Your review highlighted that Splatoon 3 is basically Splatoon 2.5, and whilst there’s nothing wrong with that – although charging full price is questionable – it begs the question: why are they happy to proceed down this path for the Splatoon series and not others? I think the obvious answer is £££.

Nintendo are a huge business and they exist to make money, and Splatoon is hugely successful and guarantees lots of money. I understand it, yet it frustrates me that we seem to be subjected to new iterations of Nintendo franchises full of new gimmicks that, if anything, actually take away from the gaming experience.

Mario Golf is a perfect example of this. The new Super Rush couldn’t just be Mario Golf with better graphics, it needed a gimmick, which actually detracts from the overall product. I recently replayed Mario Golf 64 and was pleasantly surprised by how simple, and therefore fun, I found it. I suppose I’m then inviting more full priced, content-lacking sequels though. Perhaps there is a middle ground, especially with DLC being a thing to increase longevity.
Matt

GC: We don’t think money explains it at all. Nintendo has plenty of franchises more popular, and more easily exploitable, than Splatoon. Why they have treated its sequels in such an atypical way is a mystery. Mario Party (the closest thing Nintendo has ever had to a yearly franchise) has seen more evolution than Splatoon has.

Test your love
I read your review of Splatoon 3 with much interest. I adore Splatoon but like many was concerned about what a new entry would add. So a question for you, which I imagine you could probably answer, would you still nonetheless recommend Spatoon 3 to someone who loves and has played Splatoon 2 to death? It sounds from reading your review that I may as well stick with its predecessor and save myself the money.

The one thing that would’ve clinched it for me, which is fairly minor change, is the option to choose battle modes and arenas rather than have to play whatever is in rotation. That doesn’t seem to be the case here.

And while here, how are people finding the ‘unfair’ mode in Into the Breach? It’s a challenge for sure but starting with a fully levelled up pilot, and without all the new features, I can win the game probably around 50% of the time. On hard mode, every time and sometimes without losing a single city or bonus objective. It goes to show one thing, not that I’m exceptionally good at this game but exceptionally addicted to playing it.
Ciara

GC: If you love the series, then yes. But then again, if you like it that much we wouldn’t have thought you’d need to ask.

Specialist knowledge
Will you be reviewing F1 Manager 2022?

I’m a bit F1 fan, love the Motorsport Manager games (PC and mobile) and even had MicroProse Grand Prix Manager back in the day, so I want to know if this game will scratch an itch!
StellarFlux

GC: No, we don’t have anyone that knows that much about F1. It’s been mentioned a few times by readers in the Inbox though, all of whom seemed to like it.

Role reversal
Jim Ryan’s comments about Call Of Duty exclusivity and dissatisfaction with Phil Spencer’s proposal I find hypocritical at best. Let’s be real, if PlayStation was acquiring Activision I find it extremely hard to believe they would allow key franchises onto other platforms, you only have to consider their past form. Whether it’s acquiring other studios or keeping IP like Spider-Man away from their rivals, I find it a bit rich to complain. It’s kind of absurd to consider Microsoft is willing to spend 69 billion dollars and yet have to make such concessions.

Taking away Call Of Duty is only one game and in no way a monopoly. The simple answer is for Sony to make a game of their own which equals or betters what Call Of Duty offers.

I find the pushback, particularly from the UK CMA, very lop-sided in favour of Sony. The concerns from the CMA used words that seemed to come from Jim Ryan himself. PlayStation is the market leader, has the confidence to raise their game and console prices, yet somehow they are playing the victim. When they tie-up third party deals for games like Street Fighter nobody bats an eyelid.

Let’s not forget Microsoft has committed to delivering Call Of Duty to PlayStation for ‘several years’. If they can’t develop their own rival in that time, that’s on them. Nintendo hasn’t had a Call Of Duty game on their platform for many years, yet the Switch remains the best-selling console in most regions. I think it’s a very weak argument when you consider Call Of Duty only affects PlayStation and not the other players in the gaming industry.

I don’t think Phil Spencer is averse to putting Call Of Duty on other platforms and has made his intentions clear. In fact, once Switch 2 eventually arrives, I wouldn’t be surprised at all if we see Call Of Duty on a Nintendo console once again. The way Sony are acting though, they may just seal their own fate if they continue with this entitled attitude.
Anon

GC: If the situation were reversed people would be criticising Sony and Jim Ryan. Which companies are involved doesn’t change the nature of the concerns. Also, Microsoft’s ‘several years’ have turned out to be just three.

Inbox also-rans
So we’re not going to learn anything more about Star Wars Jedi: Survivor until The Game Awards in December, are we? I really want to know who’s in that tank!
Arby

Is anyone else just finding The Last Of Us Part 1 too depressing? I’ve played it before, so I know the story, but I think the last few years have been so grim the last thing I want is a game simulating it getting even worse. Where’s my copy of Super Mario Odyssey?
Stephen

This week’s Hot Topic
The subject for this weekend’s Inbox was suggested by reader Dennis, who asks what retro video game has aged the best?

Retro gaming is big business nowadays but so are remasters and remakes, that aim to make older games more palatable to modern audiences, but which game do you feel holds up the best and is still as playable now as it always was?

How well do the graphics hold up and why do you think they have lasted better than other contemporaries? Do you still play the game in its original form and if there was a remaster or remake what would you change?

You can also submit your own 500 to 600-word Reader’s Feature at any time via email or our Submit Stuff page, which if used will be shown in the next available weekend slot.